Systematic review of CYFRA 21-1 as a prognostic indicator and its predictive correlation with clinicopathological features in Non-small Cell Lung Cancer: A meta-analysis

AIM: To evaluate the value of Cytokeratin 19 fragment for its survival prognostic indicator and predictive correlation with clinicopathological features in Non-small Cell Lung Cancer.

METHODS: Eligible studies or databases for articles were retrieved via search systematically. Pooled effect was calculated to evaluate the association between Cytokeratin 19 fragment level and long-term overall survival, as well as the tumor clinicopathological features in Non-small Cell Lung Cancer patients. A fixed-effects or random-effects model was used to calculate the Pooled risk ratios (RRs) and corresponding 95 % confidence intervals (CIs).

Lung cancer is becoming the leading cause of cancer death worldwide, with most patients dying of tumour recurrence and metastasis [1]. Non-small cell lung cancer (NSCLC) accounts for approximately 85% of all lung cancer cases [2]. In terms of both frequency and clinical significance, squamous cell carcinoma, small cell carcinoma, adenocarcinoma and large cell carcinoma are most important histologic categories. Lung cancer is known to be a highly treatment-refractory cancer. Treatment of non-small-cell lung cancer (NSCLC) is probably one of the great challenges of medical treatment owing to an increasing incidence and poor prognosis [3]. Difficulties in establishing treatment guidelines exist owing to considerable heterogeneous clinical behaviours of NCSLC. Stage of the disease is the strongest prognostic indicator. Nevertheless, other prognostic factors such as tumour histology, lymphatic and blood vessels involvement are described in the literatures [4, 5]. Hitherto, the prognosis was mainly defined by three variables: the stage of the disease, the performance status and different patient conditions including age [6, 7, 8, 9].

To improve the survival of lung cancer patients, early detection and surgical resection is necessary. In the early stage of non-small cell lung cancer (NSCLC), surgical treatment is associated with the best prognosis. Current 5-year survival rates are 50-70% in pathological stage I of the disease [10]. A few options for the detection of NSCLC are available to detect early NSCLC. Screening using sputum cytology, computed tomography (CT) scanning and histological conﬁrmation through biopsy specimens are available method for lung cancer diagnosis, but these methods are of limited use in practice owing to their diagnose accuracy, inconveniences and other disadvantages.

Despite extensive pre-operative evaluation, still a significant proportion of the patients are diagnosed with late pathological stage combined with substantially worse survival. Recently, the use of serum biomarkers to detect cancer in early stages has become an area of interest. These biomarkers were found in the involvement of development and progression of cancer [11], of which cytokines are attracting a great deal of interest as a candidate marker. They have been found to correlate with the clinicopathological features of various lymphoid and non-lymphoid neoplasms [12-19]. Cytokeratin 19 fragment (CYFRA 21-1) is a fragment of cytokeratin (CK) 19. CKs exist in many normal and malignant epithelial cells and they can be detected by a solid-phase enzyme-linked sandwich immunoradiometric assay (IRMA) [20, 21, 22, 23]. CK have been classified into 20 subtypes based on differences in the molecular mass and isoelectric point as determined by 2-dimensional electrophoresis. CK types 1-8 are categorized as type I CKs and CKs 9-20 as type II CKs. Microfilaments are heteropolymers formed from type I and type II keratins, and constitute the cytoskeleton. CK19 is a soluble type I CK, and has the lowest molecular mass (40 kDa) among the CKs. Accelerated CK19 degradation occurs as a result of increased protease activity of caspase-3, C-terminus of cytokeratin 19 (CYFRA 21-1) are released into circulation in malignant tissues [24]. Early clinical studies have shown that elevated levels of serum CYFRA 21-1 were detected in patients with non-small cell lung cancer (NSCLC). But one can observe that there are some uncertainties regarding the exact risk ratio of death associated with a high serum CYFRA 21-1 level by analyzing different studies [25-32].

Given that these studies have been published recently, our aims of the current study are to (1) investigate the exact risk ratio of the long survival associated with a high serum CYFRA 21-1 level for NSCLC, (2) identify relationships between CYFRA 21-1 high level expression and TNM pathological stage.

The initial search strategy retrieved identiﬁed 237 articles, of which 185 articles were excluded as not being relevant. The remaining studies were assessed for eligibility, finally 6 studies met [31, 33-37] our entry criteria and were retrieved for more detailed evaluation (Figure 1). Their characteristics are summarized in Table 1. Among the 824 patients, 347 patients showed high level expression. Of six included studies, two provided data on 5-year overall survival while the other provided data on 2-year overall survival. The studies were conducted in four countries (Japan, South Korea, USA and Poland).

Study quality was listed using the results of the Newcastle -Ottawa questionnaire. 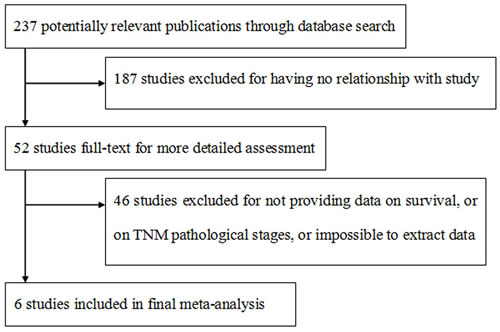 A subgroup analysis was performed because of the heterogeneity to determine whether different stage TNM of NSCLC would inﬂuence the results. The stage TNM of NSCLC in the TNM ( I-III ) groups and TNM( I-IV ) groups had significantly differences (P = 0.05, I2 = 74.4%) (Figure 2).

Correlation between CYFRA 21-1 level and the tumor clinicopathological features in NSCSLC patients.

Meta-analysis is considered to be an important tool for randomized controlled trials (RCTs) and non-randomized controlled trials (NRCTs). By summarizing the results of published studies, we aimed to evaluate the relationship existent to provide useful information for clinical decision-making in NSCLC patients. In this systematic review and meta-analysis, we found that CYFRA 21-1 high level expression in NSCLC correlated with lower 2-year overall survival and higher TNM stage(Ⅱ + Ⅲ + Ⅳ). There is no statistical significance of CYFRA 21-1 level expression between high level expression and low level expression in the advanced pathological stage of non-small cell lung cancer patients (ⅢB + Ⅳ).

CYFRA 21-1 was identiﬁed in 1993 ﬁrstly as a valuable marker in lung cancer patients, which could be measured by a sandwich enzyme-linked immunosorbent assay to detect a soluble cytokeratin 19 fragment that is expressed in bronchial epithelium and malignant lung tumors. Serum CYFRA 21-1 level was not inﬂuenced by sex and smoking habits [38, 39], which was found to be an independent prognostic factor of survival and tumour relapse [40]. The meta-analysis about prognostic significance of CYFRA 21-1 has been studied in several articles, which have indicated that high level expression of CYFRA 21-1 implies a poor prognosis [32, 34, 41-48]. In this study, we found that the 2-year overall survival in the high level group was significantly lower than that in the low level group group, which is consistant with studies previous.

Additionally, we analyzed the relationship between the expression of CYFRA 21-1 and clinicopathologic features of NSCLC. Studies were excluded if not providing information between CYFRA 21-1 level expression and clinicopathologic features. Our result also demonstrated that CYFRA 21-1 high level expression was correlated with higher TNM stage(Ⅱ + Ⅲ + Ⅳ). As mentioned previously, Stage of the disease is the strongest prognostic indicator. NSCLC could be devied into four stage in clinical practice, including (Ⅰ+Ⅱ+Ⅲ+Ⅳ) stages. StageⅠ is a early- stage NSCLC, which have opportunity for surgical treatment while stages of (ⅢB+Ⅳ) belongs to the advanced Non–Small-Cell Lung Cancer having a worse prognosis. Baesd on the pathological meaning for clinical TNM practices and information from the studies, we divided studies into two subgroups and made analysis respectively. The analysis indicated that CYFRA 21-1 high level expression in Non-small Cell Lung Cancer correlated with higher TNM stage (Ⅱ+Ⅲ+Ⅳ). As far as the the advanced Non-small Cell Lung Cancer is concerned, the result indicated that there is no statistical difference of CYFRA 21-1 level expression between high level expression and low level expression. The latest study, consistant with our study for the conclusion about CYFRA 21-1 as a poor prognosis, not analyzed its relationship between the expression of CYFRA 21-1 and clinicopathologic features of NSCLC.[49] This is the original discovery in our meta-analysis.

A meta-analysis cannot solve problems with confounding factors that could be internal to the recruited studies [50]. The results should be interpreted with caution because of several limitations to this meta-analysis. First, reports not in English were excluded. The risk of language bias had to be considered, possible publication bias could emerge as the result of the strategy of selection and the exclusion of studies. Second, the data came from NRCTs. Nevertheless, Study [51] had indicated that a meta-analysis of well designed NRCTs of study were probably as accurate as those carried out on RCTs. Third, there was heterogeneity across studies. A random-effects model was used to take variation into consideration, we controlled influence of the heterogeneity by dividing studies into subgroups for analysis. Fourth, types of methodology for CYFRA 21-1 measurement were not elaborated in studies included. By means of diverse methodology adopted in 6 studies inclued, we divided patients into one group with a CYFRA 21-1 high level expression or the other group with a CYFRA 21-1 low level expression. Finally. Comparing with 2-year overall survival, 5-year overall survival was more frequently used in clinical practice. 2-year overall survival was adopted in our study because of information provided in the studies.

A literature search was conducted using multiple databases including PubMed, the Cochrane Library and the Web of Science to ﬁnd out studies for all articles published in English before January, 2016. The terms used for thesearch were: “CYFRA 21-1” and “Non-small Cell Lung Cancer”. Reference lists of all retrieved articles were also manually searched for additional studies. Two reviewers extracted the data from each study independently. All relevant text, tables, and figures were reviewed for data extraction, and any disagreement was resolved by consensus.

Two reviewers independently extracted the following parameters from each study: (1) first author and year of publication; (2) number of population who were included in studies; (3) number of population who had a high or low level expression of CYFRA 21-1; (4) the long-term overall survival (2-year overall survival); and (5) the clinicopathological features. Data abstraction and quality assessment were performed as described previously [52]. Quality assessment was performed with the Newcastle-Ottawa quality assessment scale(NOS).The Newcastle–Ottawa scale assesses the quality of study based on the following three aspects: (i) the selection of the study cohort (or cases/controls), (ii) the comparability of the cohorts (or cases/controls) and (iii) the outcome assessment for a cohort study, or the determination of the exposure for a case–control study. The meta-analysis was performed according to the PRISMA guidelines [53].

Review Manager 5.2(RevMan 5.2®, Nordic Cochrane Center and Copenhagen , Denmark) was used to perform analysis. We analyzed dichotomous variables using estimation of Risk ratios (RR) with 95%CI. The pooled effect was calculated using either a fixed-effects or a random-effects model. The I2 statistic was used to quantify the statistical heterogeneity of the studies. When the I2 value was >50%, indicating the presence of variability among the studies, a random-effects models rather than ﬁxed-effects models was used to perform the meta-analysis. Risk ratios (RRs) with a 95% conﬁdence interval (CI) were used to report the differences in clinical outcomes between the high level expression and low level expression of population. Forest plots were used to present the results of this meta-analysis. A P-value <0.05 was considered to be signiﬁcantly different.

We acknowledge all members of Department of Thoracic Surgery, 2nd Affiliated Hospital, Zhejiang University, Hangzhou, China for their support. We thank all the group members for helpful discussions.

3. Clinical practice guidelines for the treatment of unresectable non-small-cell lung cancer. Adopted on May 16, 1997 by the American Society of Clinical Oncology. Journal of clinical oncology. 1997; 15(8):2996-3018.

22. Bodenmuller H. The biochemistry of CYFRA 21-1 and other cytokeratin-tests. Scandinavian journal of clinical and laboratory investigation Supplementum. 1995; 221:60-66.