Oral cancers are easily accessible compared to many other cancers. Nevertheless, oral cancer is often diagnosed late, resulting in a poor prognosis. Most oral cancers are squamous cell carcinomas that predominantly develop from cell hyperplasias and dysplasias. DNA damage is induced in these tissues directly or indirectly in response to oncogene-induced deregulation of cellular proliferation. Consequently, a DNA Damage response (DDR) and a cell cycle checkpoint is activated. As dysplasia transitions to cancer, proteins involved in DNA damage and checkpoint signaling are mutated or silenced decreasing cell death while increasing genomic instability and allowing continued tumor progression. Hyperphosphorylation of Replication Protein A (RPA), including phosphorylation of Ser4 and Ser8 of RPA2, is a well-known indicator of DNA damage and checkpoint activation. In this study, we utilize S4S8-RPA phosphorylation as a marker for cancer development and progression in oral squamous cell carcinomas (OSCC). S4S8-RPA phosphorylation was observed to be low in normal cells, high in dysplasias, moderate in early grade tumors, and low in late stage tumors, essentially supporting the model of the DDR as an early barrier to tumorigenesis in certain types of cancers. In contrast, overall RPA expression was not correlative to DDR activation or tumor progression. Utilizing S4S8-RPA phosphorylation to indicate competent DDR activation in the future may have clinical significance in OSCC treatment decisions, by predicting the susceptibility of cancer cells to first-line platinum-based therapies for locally advanced, metastatic and recurrent OSCC.

Oral cancer is the sixth most common cancer with a poor five year survival rate, less than 50%. Genetic alterations are common in OSCC, including inactivation of tumor suppressors such as p53 and activation of oncogenes, including H-ras and cyclin E [1]. Overexpression of H-ras promotes overexpression of cyclin E [2]. Consequently, cyclin E increases origin firing resulting in replication stress and the activation of the DDR [3, 4]. The DDR is a complex network of proteins that work together to detect DNA damage and affect a cellular response through an extensively interconnected series of signal transduction pathways. Ultimately, DDR activation concludes with one of four outcomes: (1 Halting progression of the cell cycle, before resuming the cell cycle after repair of DNA damage, termed checkpoint activation and checkpoint recovery, respectively; (2 Apoptosis – programmed cell death; (3 Senescence – permanent cell cycle arrest; or (4 Bypassing the DDR and resumption of the cell cycle without complete DNA repair, leading to genetic instability, and in some cases, uncontrolled cell proliferation and cancer formation [5].

It is clear that there are enormous biological consequences of a mutated or incapacitated DDR. Through better understanding of the DDR and differential expression of DDR factors in health and disease, there is promise of not only improving the diagnosing and prognosticating of various cancers but also in guiding treatment decisions and developing new therapies to target these differences between malignant and healthy tissues. This is especially pertinent when it comes to the treatment of cancer since the mechanism of action of non-surgical treatment methods such as radiation therapy (RT) and many types of chemotherapies focus on inflicting DNA damage. Current first-line treatments for OSCC patients with locally advanced, metastatic and recurrent cancers primarily involve single agent platinum-based therapies or in combination with mitotic and/or EGFR inhibitors. Current oral cancer treatment protocols call for chemotherapy with cancer stages III through IVC. These cancers can have tumors graded T1 to T4. Therefore, knowing the different responses to chemotherapy based on tumor grade would be important in determining treatment outcome and, inevitably, treatment success or failure. Although great progress has been made in recent years towards understanding the DDR, there is still a great deal that needs to be investigated to achieve a better understanding of health and disease management.

Though there are hundreds of proteins that play a role in the DDR, there are apical kinases that work together to coordinate the response: Ataxia telangiectasia and Rad3 related protein (ATR), Ataxia telangiectasia mutated (ATM) and DNA-dependent protein kinase (DNA-PKcs) [6–7]. ATR plays a vital role in detecting DNA damage and replication stress as well as initiating checkpoint activation. ATR is also involved as an intermediate of DNA repair, and activates in response to stalled or collapsed replication forks or as a by-product of double stranded breaks (DSBs) [8, 9]. In contrast, ATM and DNA-PKcs are activated in response to DSBs and phosphorylate many of the same substrates, including Replication Protein A (RPA) [10]. RPA, a heterotrimeric protein with subunits of decreasing size termed RPA1, RPA2, and RPA3 is involved in numerous DNA metabolic pathways such as DNA replication, DNA repair, DNA recombination, and the DDR [11, 12]. In response to DNA damage, RPA2 is phosphorylated at multiple sites by ATR, ATM and DNA-PKcs [13–16]. This differential RPA2 phosphorylation has been correlative to predicting resistance to DNA damaging agents in cellular based assays. Manthey et al. identified that a series of OSCC cell lines able to profoundly phosphorylate ATM and DNA-PKcs phosphorylation sites S4 and S8 on RPA2 were more resistant to cisplatin treatment than cells with reduced phosphorylation at S4 and S8 [17]. Their findings suggest that increased S4S8-RPA phosphorylation in response to cisplatin signifies an amplified DDR, halting cell cycle progression and increasing DNA repair, leading to increased drug resistance.

In this study, we determine that immunohistochemical detection of S4S8-RPA phosphorylation can act as a surrogate to determine DDR activation status in human tissues. The resultant amount of phosphorylation is correlative in determining whether a tissue is normal, dysplastic, or cancerous, as well as the grade of tumor. These results suggest that S4S8-RPA phosphorylation may act as a useful clinical indicator of the DDR in oral dysplastic and tumor tissue, and would be clinically beneficial in determining therapeutically efficacious strategies for treatment in stage III–IVC OSCC.

RPA is significantly hyperphosphorylated in dysplastic and OSCC tissues 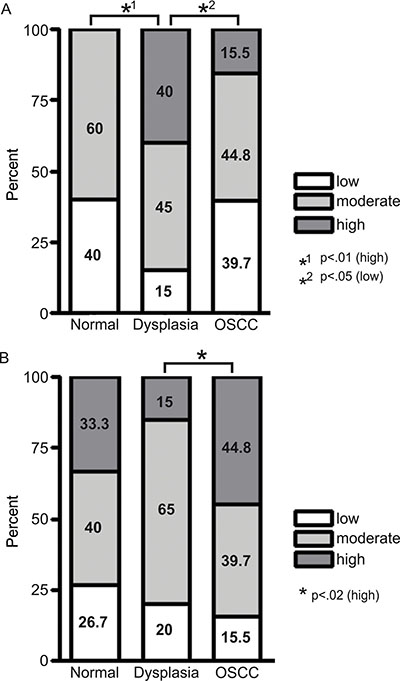 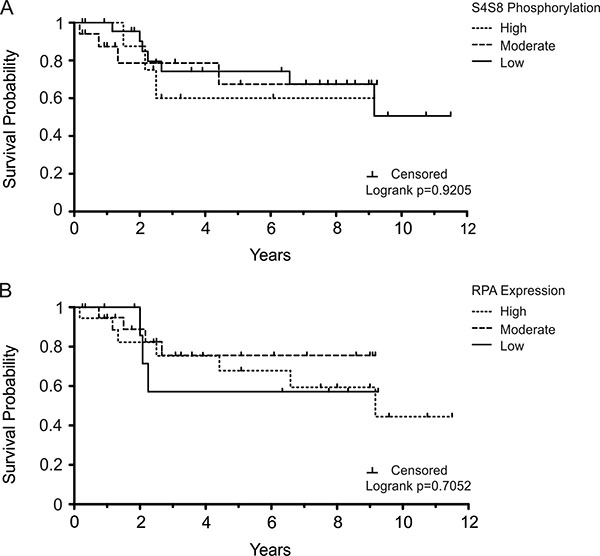 Figure 2: Kaplan-Meier survival plots displaying OSCC survival probability for the patients that were not treated with chemotherapy/radiation therapy. Survival probability is displayed in comparison to (A) S4S8-RPA phosphorylation levels and (B) overall RPA expression levels (low, moderate, high). Censored data is indicated by a tick mark.

Since cancers with low S4S8-RPA phosphorylation, and therefore low DDR signaling, would likely be more susceptible to therapies that involved DNA damage agents, we evaluated a subgroup of tissues from patients receiving chemotherapy and/or radiation therapy in addition to surgery (n = 29) (Figure 3). The 5-year survival probabilities of the high, moderate, and low S4S8-RPA phosphorylation groups were 66.67% (n = 3), 85.71% (n = 15) and 77.92% (n = 11) respectively (Figure 3A). Due to the small number of samples, the differences within this grouping are not significant (Logrank p = 0.7742). However, this result trends to the possibility that high S4S8-RPA phosphorylation in OSCC leads to poorer prognosis possibly due to resistance to DNA damaging agents. 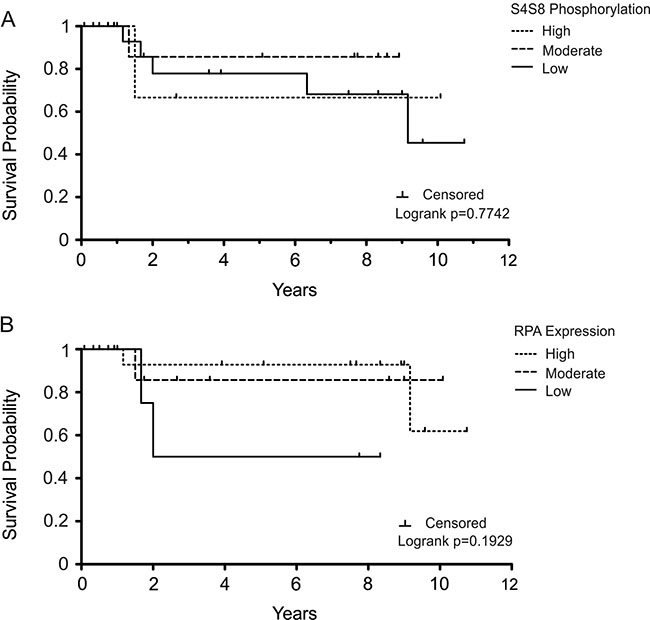 Figure 3: Kaplan-Meier survival plot examining OSCC survival probability in the subgroup of patients who were treated with chemotherapy/radiation therapy. Survival probability is displayed in comparison to (A) S4S8-RPA phosphorylation and (B) overall RPA expression levels (low, moderate, high). Censored data is indicated by a tick mark.

Relative S4S8 phosphorylation is an indicator of tumor progression 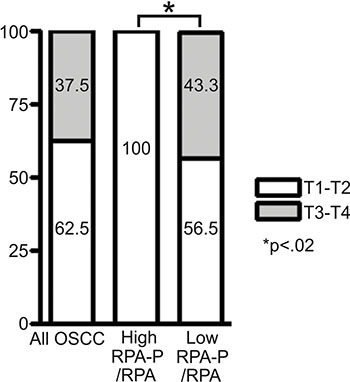 A recently developed model for cancer progression argues that oncogene-induced DNA damage leads to activation of pathways, including S4S8-RPA phosphorylation, that serve as a barrier to cancer progression [21]. Our finding of a significant increase in S4S8-RPA phosphorylation observed in dysplasia compared to normal and OSCC tissues support this model. This finding is consistent with other studies which demonstrate an increased DDR in precancerous tissues compared to normal tissue, followed by a drop in DDR in mature tumors [18, 21]. Further, if we interpret RPA expression as a marker for replication, the potential decrease in RPA expression noted in precancerous tissues is consistent with results from studies of colon cancer progression [21]. For example, Bartkova et al, using IHC methods, demonstrated an increased activation of the ATM-Chk2-p53 checkpoint pathway in early, superficial urinary bladder cancer lesions compared to normal and advanced tumors [18]. Considering ATM is one of two primary kinases that phosphorylate RPA2 at S4 and S8, it is reasonable to suggest that RPA phosphorylation also plays a role in this tumorigenesis barrier.

Normal (non-dysplastic or cancerous) and dysplasia human biological material (HBM) tissues used for immunohistochemistry were obtained from archived paraffin-embedded, formalin-fixed tissue samples from the University of Nebraska Medical Center College of Dentistry Oral Pathology biopsy service in Lincoln, NE. Oral, laryngeal, and hypopharyngeal squamous cell carcinoma (OSCC) tissues were obtained in the form of paraffin-embedded slides from the University of Nebraska Medical Center College of Medicine Department of Pathology and Microbiology in Omaha, NE. When applicable, biographical data and disease-specific medical history was obtained from the UNMC College of Medicine Department of Otolaryngology/Head & Neck Surgery in Omaha, NE. Institutional Review Board (IRB) approval was obtained for the use of collected HBM and relevant medical data. 15 normal, 20 dysplasia, and 58 OSCC tissues were examined in this study.

From paraffin-embedded tissue blocks, 4–6 μm thick sections were prepared on slides for IHC. Negative control slides were processed without primary antibody. High-staining tissues were used as positive controls. Slides were deparaffinized and rehydrated with three stages of xylene immersion (5′) and decreasing concentrations of ethanol from 100%(2 × 5′), 95% (2 × 3′), 80% (3′), 70% (3′), 50% (3′). Slides were then treated for 10 minutes with 3% hydrogen peroxide (H2O2) to block endogenous peroxidase activity. Antigen retrieval was performed by a 20 minute water bath in Tris EDTA buffer (pH 9.0) between 96–99 degrees Celsius. Slides were allowed to cool at room temperature for 30 minutes. Slides were washed with IHC solution wash (Bethyl). Primary antibody incubation was performed at 1:100–125 dilution overnight in a condition-controlled cold room. After washing slides, biotinylated anti-mouse secondary antibody was incubated at 1:100 dilution and according to manufacturer’s recommendations for the pre-diluted anti-rabbit Ab for one hour at room temperature. Following slide washing, RPA2 antibody-treated slides were treated with streptavidin-HRP for 30 minutes and washed. S4S8-RPA antibody treated slides had HRP conjugated directly to secondary antibody. Diaminobenzene (DAB) exposure for 2–5 minutes was then followed by distilled water wash (3 × 3′). Slides were counterstained with Meyer’s hematoxylin for 2 minutes, and washed in a basic bluing solution or running tap water. Slides were then dehydrated with increasing concentrations of ethanol (95% 2 × 5′, 100% 2 × 5′) and xylene immersion (3 × 5′) to prepare for slide mounting.

Chi-squared tests for independence was performed to evaluate differences in S4S8-RPA phosphorylation proportions and RPA expression proportions between groups. Statistical significance was considered at a p-value < 0.05. Logrank scores were computed to test for the difference in survival probabilities between high, moderate, and low S4S8-RPA phosphorylation as well as RPA expression. Survival probability statistics and Kaplan-Meier curves were generated with GraphPad Prism 4.

We would like to acknowledge Kaeli Samson for her assistance with this manuscript and the assistance from Dr. Peng and his laboratory.

11. Oakley GG, Patrick SM. Replication protein A: directing traffic at the intersection of replication and repair. Frontiers in bioscience. 2010; 15:883–900.