Immunotherapy for patients with advanced pancreatic carcinoma: a promising treatment

Pancreatic cancer (PC) is the fourth most common cause of cancer death worldwide, which is characterized by an extremely poor survival rate [1]. Up to 80% deaths occur

within the first year of diagnosis and the overall 5-year mortality rate is over 95% [2, 3]. Although surgical resection is the only potentially curative approach, only 10-20% of pancreatic tumors are operable, about 40% are locally advanced, unresectable and 45% are with metastases [4, 5]. Usually, patients with advanced pancreatic cancer (APC) are unable to resort to surgery, the treatment alternatives of whom are very limited, with gemcitabine as the current first-line treatment [6]. However, patients received gemcitabine had a overall survival (OS) of around 6 months and a one-year survival ≤ 20% [7]. Once APC patients are resistant to gemcitabine therapy, there is barely effective treatment. New treatment strategies are therefore urgently required.

Recently, immune cell-based cancer therapy has been attempted as an alternative treatment option for anticancer therapy [8]. It eliminates cancer cells by modulating the immune system to suppress cancer by active (potentiating the patient’s intrinsic immune system against cancer cells ) and passive (administering extrinsic man-made immune system components ) immunotherapy [9]. Immunotherapy has an advantage over chemo(radio) therapies due to its specificity against tumor without hurting normal tissue [10]. Immunotherapeutic methods to PC included the administration of antibodies [11], cytokines [12], peptide vaccines [6,13-18], and autologous activated lymphocyte (e.g. dendritic cells, lymphokine activated killer cells, and cytotoxic T-lymphocyte) therapies [10, 19-24]. Despite the limited benefit of gemcitabine, it may enhance responses to specific vaccines or synergize immune system stimulators [22]. Hence, combining gemcitabine with immunotherapy for APC patients was used in most clinical trials. However, these published trials have been small with consistent results, precluding robust estimates of benefit.

To assess the benefit of immunotherapy in the treatment of patients with APC neutrally, we would like to perform a published data meta-analysis of all relevant single-arm trials.

Table 1: Detailed data of the 18 trials included in this meta-analysis 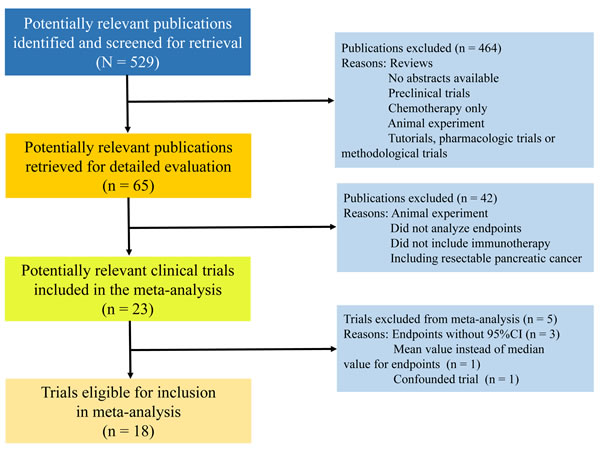 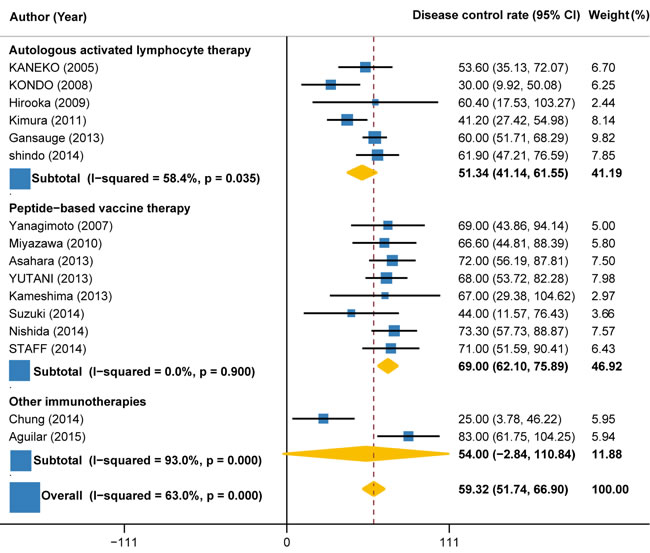 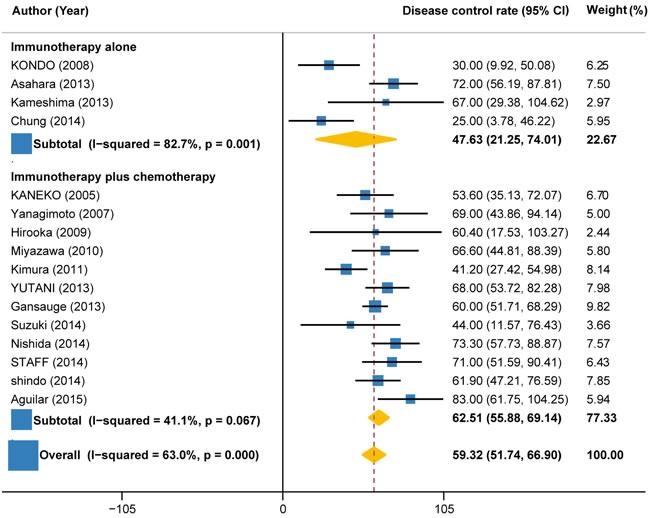 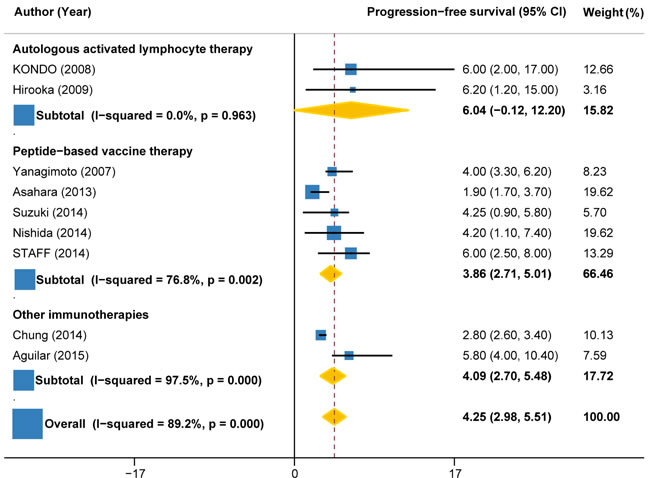 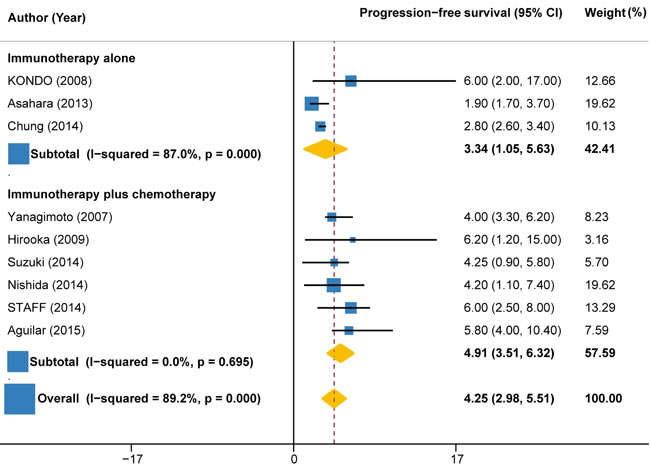 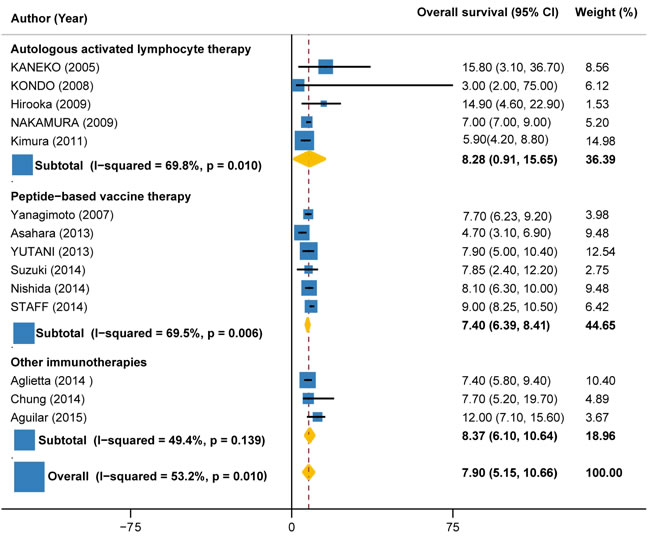 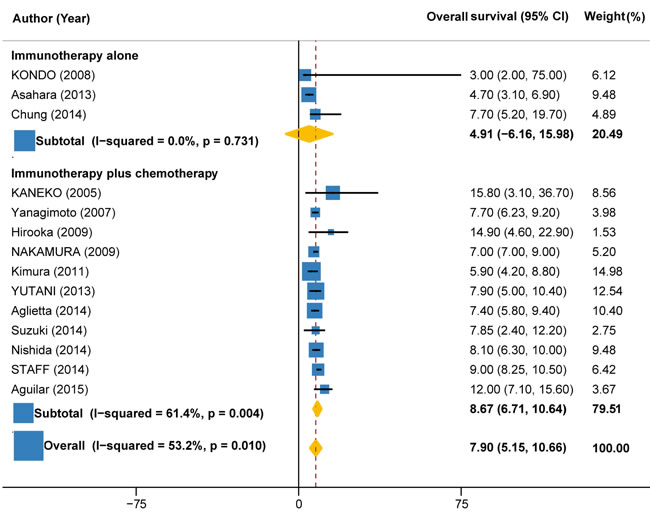 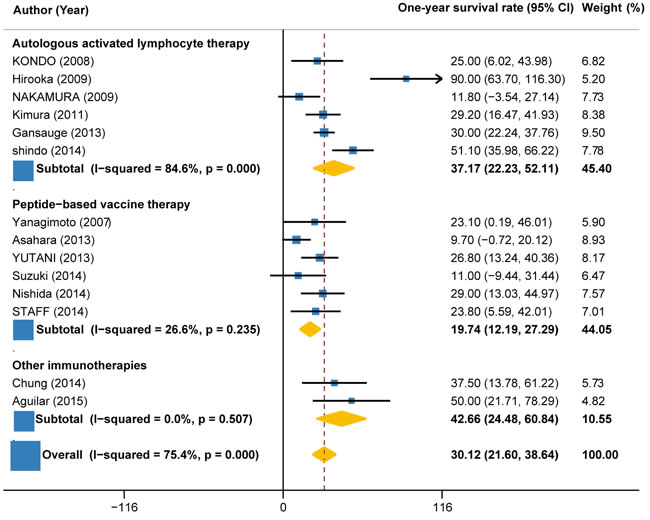 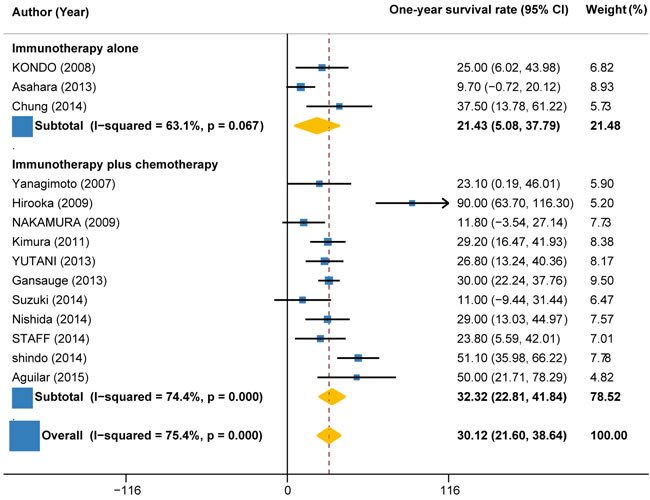 The present meta-analysis gathers all currently available data from single-arm studies reporting immunotherapy for those patients with advanced pancreatic cancer. To our best of knowledge, ours is the first meta-analysis to analyze the efficacy and safety of immunotherapy using single-arm trials. The results showed immunotherapy is more effective than other previously reported standard treatmentin terms of OS, PFS, 1-year survival rate for advanced pancreatic carcinoma [28-32]. After stratifying trials according to the type of immunotherapy, we found that the benefits of autologous activated lymphocyte therapy were more significant than that of peptide-based vaccine therapy (OS: 8.28 months vs. 7.40 months; PFS: 6.04 months vs. 3.86 months; 1-year survival rate: 37.17% vs. 19.74%). Since the early 1990s, many institutions have actively studied the use of autologous activated lymphocyte therapies, including lymphokine-activated killer lymphocytes (LAK), cytotoxic T-lymphocyte (CTL), and dendritic cell (DC) [33]. Among various immune cell types studied as potential candidates for effective immunotherapy, DCs are potent antigen-presenting cells that participate in the initiation of T-cell immunity and involved in the regulation of both innate and adoptive immune response [24, 34]. Some previous clinical trials have used the combination antigen-pulsed or peptide-pulsed DC vaccine with LAK cells or CTLs in patients with advanced pancreatic cancer and observed significantly prolonged survival time [10, 20, 21, 23, 24].

As a matter of fact, all trials performed so far comparing immunotherapy with standard therapies failed to show the superiority of the former [35]. Obviously, cancer immunotherapy would not be able to take the place of chemotherapy and radiotherapy. Moreover, though recent clinical trials have investigated the sequential administration of immunotherapy and chemo (radio) therapy, the immunosuppressive effects of these standard therapies may weaken the efficacy of immunotherapy. Therefore, it will be essential to find an optimal way to integrate immunotherapy with chemo(radio) therapy. Subgroup analysis indicated that the benefits of combined therapy were more significant than that of immunotherapy alone (DCR: 62.51% vs. 47.63%; OS: 8.67 months vs. 4.91 months; PFS: 4.91 months vs. 3.34 months; 1-year survival rate: 32.32% vs. 21.43%). For chemotherapy, gemcitabine is currently one of the standard therapies for advanced pancreatic cancer, although many chemotherapeutic drugs have been used in clinical trials over the past two decades [35]. However, the effect of gemcitabine is limited and most patients received gemcitabine die within 6 months. Interestingly, some recent reports showed that gemcitabine may improve patients’ response to immunotherapy [22]. Dauer et al have demonstrated in their in vitro study that human pancreatic cancer cell lines could be sensitized by gemcitabine against CTL-mediated lysis [36]. DC vaccine plus gemcitabine prolongs survival time in a animal model [37]. Although some trials of combined therapies including not only gemcitabine but also other cytotoxic drugs showed improved response rates compared with gemcitabine alone, they failed to gain survival benefits [38-41]. Thus, most trials included in this meta-analysis combined only gemcitabine with immunotherapy.

The importance of treatment-related adverse events (TRAEs) that related to immunotherapy must be emphasized. Reporting on TRAEs was variable across trials. Of the included 18 trials, no trails observed related to autologous activated lymphocyte therapy. Five trials using peptide-based vaccine therapies reported (16.6 ± 3.9)% grade III TRAEs and no grade IV TRAEs and one trial reported no TRAEs. Therefore, immunotherapy used in advanced pancreatic cancer patients is safe and no evidence of autoimmune disease was noted, especially for autologous activated lymphocyte therapy.

In summary, cancer immunotherapy was well tolerated and effective in the treatment of advanced pancreatic carcinoma. Currently, available clinical evidences suggest that the combination immunotherapy with standard therapies should be recommended as preferred therapy for those patients with advanced pancreatic carcinoma. For vaccine-based immunotherapy, autologous activated lymphocyte therapy was considered to be the more promising and encouraging treatment compared with peptide-based vaccine therapy. Further clinical investigations, especially randomized controlled trials are warranted to determine the effectiveness and tolerability of immunotherapy.

We conducted separate PubMed (inception to June 2016), EMBASE (inception to June 2016) and the Cochrane Library (inception to June 2016) searches of all relevant English language articles using an extension of the Cochrane search strategy [25]. Potential studies were identified by using the following keywords: “immunotherapy” OR “immunotherapeutic” OR “immune-cell based cancer therapy” OR “vaccine-based immunotherapy” AND “pancreatic cancer” OR “pancreatic carcinoma” OR “pancreatic adenocarcinoma” AND “advanced” OR “unresectable” OR “metastatic” OR “refractory” OR “inoperable”. Further information was manually searched reference lists from already retrieved studies and general medical journals (e.g., New England Journal of Medicine, The Lancet, British Journal of Medicine and JAMA) and journals in the cancer field (e.g., Journal of Clinical Oncology, Cancer Research, Cancer, Annals of Oncology, British Journal of Cancer, and Cancer Treatment Reviews). In particular, review articles were also examined for published results. By carefully checking the body of each publication and the name of all authors, we avoided duplications of data. The search strategy used is illustrated in Figure 1.

The selection criteria was as follows: (1) Trials were in the English language and were limited to human trials; (2) Prospective or retrospective clinical trials with or without a control population were eligible for inclusion; (3) Trials assessed the efficacy and safety of immunotherapy in the treatment of APC. (4) Trials reported endpoints without 95%CI or mean survival time were not included.

Data on disease control rate (DCR) (partial response [PR] + complete response [CR] + stable disease [SD]), overall survival (OS), progression-free survival (PFS), 1-year survival rate and treatment-related adverse events (TRAEs) were independently extracted by two reviewer, with any discrepancies resolved by consensus (and if necessary with a third reviewer). The primary endpoint evaluated was DCR. The secondary endpoints evaluated were OS, PFS, 1-year survival rate and TRAEs. OS and PFS were estimated from the date of the initial treatment to the date of death or final follow-up and the date of disease progression, respectively. These endpoints were analyzed for all included studies for which data were available. The subgroup analyses were conducted according to the type of immunotherapy (autologous activated lymphocyte therapies, peptide vaccine therapy, and other immunotherapies such as monoclonal antibodies), combination with or without chemotherapy.

The authors have declared that no conflict of interest exists.

This manuscript is supported by funding from the National Scientific Foundation of China (81571664) and the Science and Technology Planning Project of Guangdong Province (2014A020212244).

Bin Zhang, Yuhao Dong designed and supervised the study. Shuixing Zhang obtained funding. Bin Zhang, Yuhao Dong, Jing Liu, and Zhouyang Lian searched and selected the trials. Long Liang, Wenbo Chen, and Lu Zhang participated in data collection and checking. Bin Zhang, Xiaoning Luo, Shufang Pei, Xiaokai Mo, Wenhui Huang, Fusheng Ouyang, and Baoliang Guo did the statistical analyses. Bin Zhang wrote the draft, with the revisions from the other investigators, All authors had full access to all the data and had final responsibility for the decision to submit for publication.

2. Brunet LR, Hagemann T, Andrew G, Mudan S, and Marabelle A. Have lessons from past failures brought us closer to the success of immunotherapy in metastatic pancreatic cancer? Oncoimmunology. 2016;5:e1112942.