Materials and methods: This study retrospectively enrolled 196 ovarian cancers arising or not in endometriosis judged by adjunctive use of CD10 immunohistochemistry in conjunction with H&E staining specimens. Clinicopathologic variables, progression-free survival (PFS) and overall survival (OS) were recorded. Kaplan-Meier analysis was performed to compare survival curves. Cox regression models were used to analyze the effect of endometriosis on PFS and OS. A prognostic nomogram was constructed based on the independent prognostic factors identified by multivariate analysis.

Conclusions: Endometriosis is an independent predictor of prognosis in ovarian cancer patients.

Endometriosis, a chronic gynecological disease, shares common characteristics with malignant cells [1]. Although endometriosis remains largely benign, malignant transformation may account for up to 1% of cases, most commonly from ovarian lesions [2, 3]. In addition to epidemiological evidence between endometriosis and ovarian cancer, the pathological findings confirmed endometriosis in close proximity to the tumor [4, 5]. Both ovarian clear cell and endometrioid carcinoma are associated with endometriosis [6].

Patient characteristics and associations with endometriosis

Table 1: Patient characteristics in ovarian cancer arising or not from endometriosis. 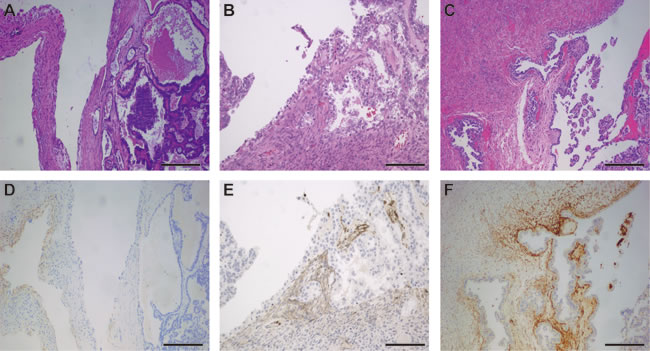 Endometriosis is associated with PFS and OS in ovarian cancer patients

To further estimate the relationship between endometriosis and clinical outcomes of ovarian cancer patients, we applied Kaplan-Meier survival analysis and log-rank test to compare PFS and OS between two groups. As shown in Figure 2, patients with endometriosis were significantly associated with late recurrence (P < 0.001) and better OS (P < 0.001). We further performed a subgroup analysis by FIGO stage (Figure 3). The prognostic value of endometriosis is more prominent in patients with early stage (FIGO I-II) (P < 0.001 for both PFS and OS). 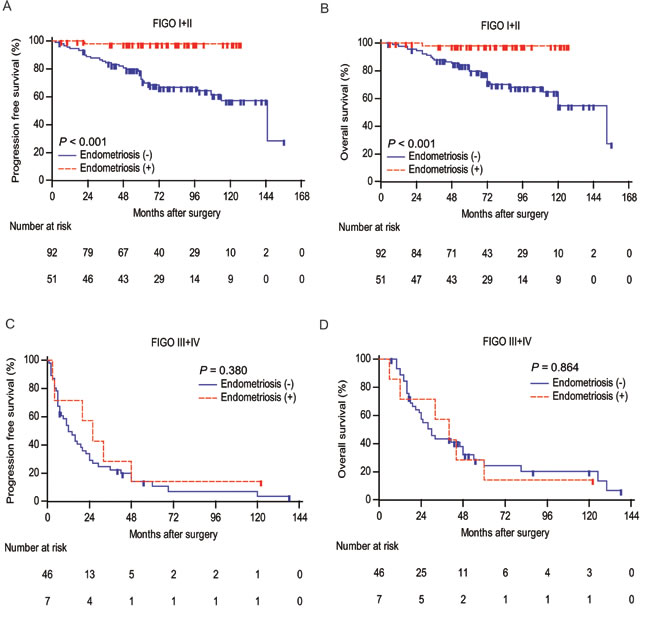 Endometriosis is an independent predictor of PFS and OS

To determine the prognostic significance of clinicopathologic variables of PFS and OS, we performed univariate Cox analysis. As present in Table 2, endometriosis was identified as a protective factor that might affect PFS (hazard ratio (HR) 0.187, P < 0.001) and OS (HR 0.238, P < 0.001) of ovarian cancer patients. In addition, FIGO stage, lymph node metastasis, intraperitoneal metastasis, residual tumor, ascites, and CA125 were identified as unfavorable factor for PFS and OS. On multivariate analysis, endometriosis is an independent prognostic factor for PFS (HR 0.284, P = 0.002) and OS (HR 0.349, P = 0.009).

Association between endometriosis and clinical outcomes in early stage patients

To evaluate the clinical usefulness of endometriosis in early stage ovarian cancer, we performed subgroup analysis upon early stage patients. By univariate analysis, intraperitoneal metastasis (P < 0.001 for both PFS and OS) and residual tumor (P = 0.027, P = 0.021 for PFS and OS, respectively) were significantly associated with poor clinical outcomes, while endometriosis (P = 0.004, P = 0.007 for PFS and OS, respectively) was significantly associated with better prognosis (Table 3). Multivariate analysis showed that endometriosis remained as an independent indicator of PFS (HR 0.054, P = 0.004) and OS (HR 0.064, P = 0.007).

Construction and validation of prognostic nomogram for PFS and OS

Significant prognostic factors were concluded from multivariate Cox regression analysis of PFS and OS to establish nomogram (Figure 4). The nomogram illustrated FIGO stage as sharing the largest contribution to prognosis, followed by endometriosis and CA125. The calibration plot for the nomogram presented an optimal agreement between the predicted and actual observation for the PFS and OS at 5-year (Figure 5). 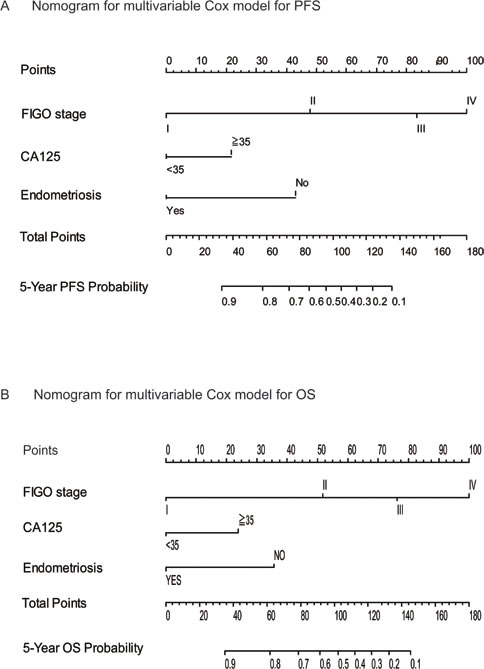 Figure 4: Survival nonograms. Nomograms were created from the multivariable Cox model. The presence or absence of each variable is scored (top row). The cumulative score from each variable is used to calculate 5-year PFS A. and OS B. probabilities. PFS = progression-free survival. OS = overall survival.

Figure 5: The calibration curves for predicting patient survival at each time point. Nomogram-predicted 5-year PFS A. and 5-year OS B. is plotted on the x-axis; actual PFS and OS is plotted on the y-axis. A plot along the 45-degree line would indicate a perfect calibration model in which the predicted probabilities are identical to the actual outcomes.

In our data, when FIGO stage was controlled, endometriosis remains significant on multivariate analysis between subjects and controls. This supports the hypothesis that EAOC as a distinct disease from non-EAOC with better prognosis [18]. ARID1A (AT-rich interactive domain 1A) mutations and consequent loss of BAF250a (BRG-associated factor 250a) protein expression were particularly identified in EAOC, and in the contiguous atypical endometriotic lesions, but not in distinct endometrioid lesions far from the carcinoma, suggesting such phenomenon as a possible early event in the malignant transformation of endometriosis [19, 20]. ARID1A mutations induce chromatin remodeling dysfunction and tend to coexist with activating PIK3CA mutations [21]. Moreover, atypical endometriosis and EAOC may share several molecular alterations such as ARID1A and PIK3CA mutations, PTEN loss, MET amplifications, and HNF1B overexpression, suggesting a common molecular mechanism for malignant development [22-24]. In an Apc- and Pten-defective mouse ovarian cancer model loss of ARID1A enhances epithelial differentiation and prolongs survival, which may account for the better prognosis of ovarian cancer arising in endometriosis [25]. The clinical significance of loss of ARID1A in EAOC has remained to be elucidated.

Our data are consistent with that of Shuang et al [14], who reported that 78.5% of clear cell cancer associated with endometriosis presented as stage I and II compared with 37.4% of clear cell ovarian cancers that are not associated with endometriosis. With regard to endometriosis as independent predictor for prognosis, there was a discrepancy between the study of Shuang et al [14] and our own. Resolving this issue only be these two studies is difficult because the number of patients in both studies was insufficient. Potential limitation of this analysis should be considered. This is a retrospective analysis, and data were obtained by clinical records; thus, only hard information, such as age and stage of the disease, were collected.

After approval from institutional review board, we retrospectively identified 196 cases with a primary diagnosis of pure clear cell, endometrioid, or mixed ovarian cancer at our hospital between 1995 and 2010. Of the mixed tumors, 8 cases showed clear cell histology with endometrioid histology, whereas the remaining tumors showed heterogeneous histology consisting of endometrioid, clear cell, and serous differentiation. All patients underwent surgery according to Federation of Gynecology and Obstetrics (FIGO) guidelines for ovarian cancer. All patients received a platinum-based chemotherapy regimen, and the number of cycles ranged from six to nine after tailoring to different individuals. Microscopic slides were reviewed and confirmed by two experienced gynecologic pathologist (Dr. XT and JZ). Patients were divided into two groups according to the detection of cancer arising from ovarian endometriosis or not on the basis of the Sampson and Scott criteria: 1) the presence of both benign and neoplastic endometrial tissues in the tumor, 2) histological findings compatible with an endometrial origin, 3) the discovery of no other primary tumor sites, and 4) a morphologic demonstration of a continuum between benign and malignant epithelium [10]. Patients with the pathological findings confirmed endometriosis in close proximity to the tumor, but not histologically contiguous to the ovarian cancer tissue were excluded. The inclusion and exclusion criteria were summarized in Supplementary Figure 2. No statistically significant differences in tumor characteristics or survival outcomes were observed for included and excluded patients (Supplementary Table 2 and Supplementary Figure 3).

Correlations between endometriosis and clinicopathologic characteristics were analyzed with χ2 test. Clinical outcomes were assessed by progression free survival (PFS) and overall survival (OS). PFS was defined as the interval between the date of surgery and the date of diagnosis of any type of progression. OS was defined as the interval between surgery and death. Patients were censored if they were lost to follow-up or if they show not progression or were still alive at the time of last follow-up. Follow up was updated in Feb 2015. Kaplan-Meier method with log-rank test was applied to compare survival curves. Univariate and multivariate Cox regression models were fitted to evaluate the effect of prognostic factors on OS and PFS, and P > 0.10 was the removal criterion when performing backward stepwise variable deletions. Nomogram was constructed as the prognostic model whose accuracy was evaluated by the Calibration plot. Data were analyzed using MedCalc software (version 12.7.0.0; MedCalc, Mariakerke, Belgium), and R software, version 3.1.2 (The R Foundation for Statistical Computing, http://www.r-project.org). All statistical tests were two sided and performed at a significance level of 0.05.

23. Gadducci A, Lanfredini N and Tana R. Novel insights on the malignant transformation of endometriosis into ovarian carcinoma. Gynecological endocrinology. 2014; 30(9):612-617.