Lipopolysaccharide is a main toxin from Gram-negative bacteria which cause mammary gland and/or upper genital tract infections such as mastitis and metritis, and impair the reproduction performance in females [1–3]. In bovine, nearly 80–90% of uteri were contaminated with bacteria after parturition, and the contamination may persist and manifest as subclinical or clinical metritis in 40% of animals [4–6]. This large scale postpartum metritis causes huge economic losses, contributing to female reproductive disorders which is estimated to cost €1.4 billion in the EU and $650 million in the United States annually [7, 8]. Lipopolysaccharide exposure also disturbs endometrial endothelial cell functions and causes sperm apoptosis in human [9, 10].

Oocyte maturation, which is essential for the subsequent fertilization and embryo development, can be easily perturbed by a series of regulatory events such as oxidative stress, apoptosis and epigenetic modifications [19]. Oxidative stress can negatively affect spindle integrity and biological function [20], lower meiotic resumption rates [21], and then decrease oocyte maturation potential. Numerous studies have shown that lipopolysaccharide could induce cytotoxicity by enhancing cellular oxidative stress in different cell lines, including macrophage cell [22], dendritic cell [23], and epithelial cell [24]. The intracellular glutathione-dependent redox homeostasis could be altered by lipopolysaccharide exposure [22]. Moreover, Raza et al. reported that lipopolysaccharide could induces apoptosis by increasing the expression of oxidative stress-sensitive genes and proteins, and releasing the pro-apoptotic factor mitochondrial cytochrome c from the mitochondrial intermembrane space into the cytoplasm [25]. In addition, specific changes of histone H3 acetylation (H3-acetyl), dimethyl-histone H3 lysine 4 (H3K4me2), dimethyl-histone H3 lysine 9 (H3K9me2) levels occurred during lipopolysaccharide stimulation in human intestinal epithelial cells [26]. In oocyte, abnormal epigenetic modifications would lead to deficient chromosome condensation and segregation, and further delay the progression of maturation and trigger oocyte aging [27]. Studies on the toxic effects of lipopolysaccharide revealed that lipopolysaccharide could impair oocyte nuclear and cytoplasmic maturation, and decrease the proportion of cleaved embryos and the blastocyst formation rate after fertilization [17, 18]. However, the underlying mechanism by which lipopolysaccharide disrupts the maturation potential of oocyte has not been well elucidated.

The present study was conducted to assess the effects of lipopolysaccharide on the maturation potential of bovine oocytes and examine a preliminary exploration of the possible mechanisms involved through the aspects of cytoskeletal dynamics, oxidative stress, and epigenetic modifications. 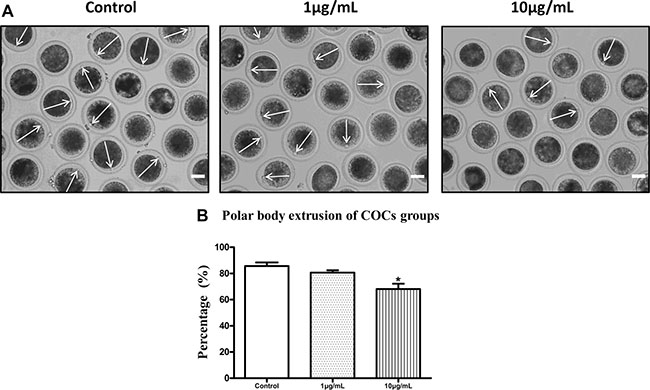 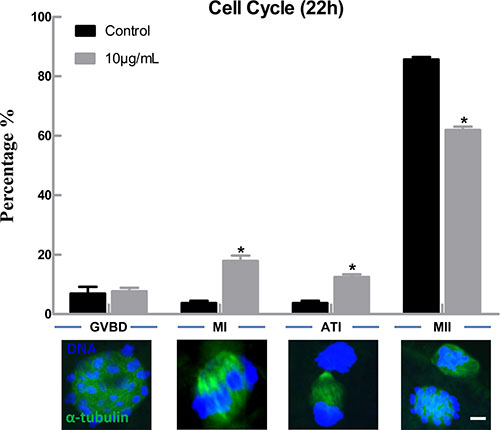 Following spindle morphology detection of MI oocytes exposed to lipopolysaccharide, we found that a substantial percentage of oocytes exhibited disrupted spindle morphologies and misaligned chromosomes. These oocytes had multiple poles, no poles, or disrupted poles (Figure 3A). In contrast, the majority of oocytes possessed normal spindle morphologies and well-aligned chromosomes in the control group. The percentage of abnormal spindle was significantly higher in lipopolysaccharide treatment group (12.40 ± 0.95%, n = 138) than that in the control group (4.87 ± 0.29%, n = 129, P < 0.05) (Figure 3B). The actin assembly was not affected by lipopolysaccharide exposure, as the actin cap was present in both the treatment and the control groups (Figure 4). 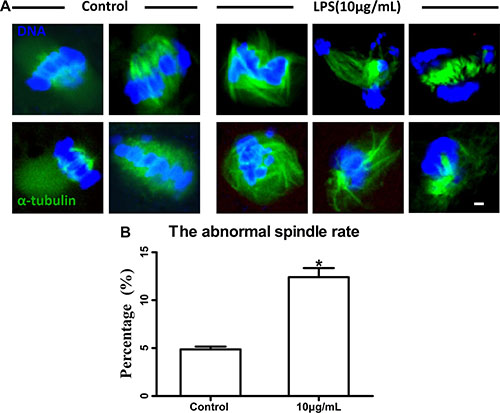 Figure 4: Actin assembly was not disrupted following lipopolysaccharide treatment. The actin cap was present in both the treatment and the control groups. Blue, chromatin; Green, α-tubulin; Red, actin. Bar = 20 μm.

To further confirm the effects of lipopolysaccharide on meiotic spindle, the localization and level of phosphorylated mitogen-activated protein kinase (p-MAPK), a typical spindle regulator, were analyzed. As shown in Figure 5A, the localization of p-MAPK in oocyte exposed to lipopolysaccharide was disrupted (Control n = 47, Treatment n = 56), and the level of p-MAPK protein was significantly decreased compared with the control group (P < 0.05; Figure 5B). These results suggest that lipopolysaccharide exposure could delay cell cycle progression and disrupt the spindle structure of bovine oocytes. 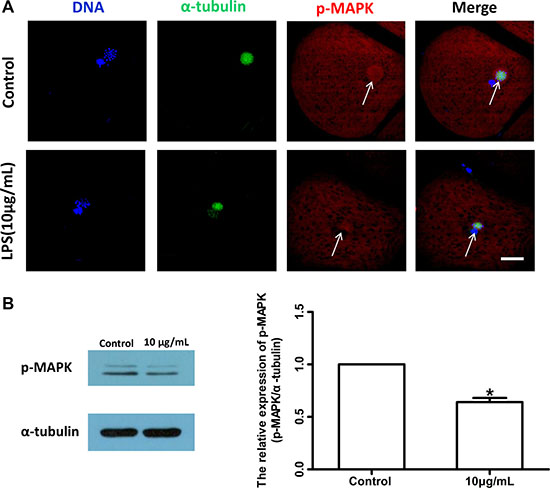 Lipopolysaccharide treatment significantly increased intracellular dihydroethidium (DHE) and reactive oxygen species (ROS) levels in oocytes compared to the control group (P < 0.05; Figure 6B and 6D). These results indicated that lipopolysaccharide treatment induces oxidative stress in bovine oocytes. Annexin-V assay showed that the early apoptotic rate in oocytes exposed to lipopolysaccharide (25.00 ± 3.21%, n = 46) was significantly higher than that in the control group (12.33 ± 1.45%, n = 37; P < 0.05) (Figure 7A and 7B). 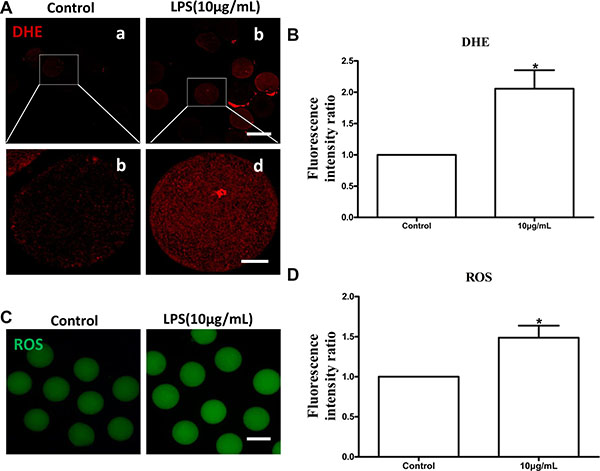 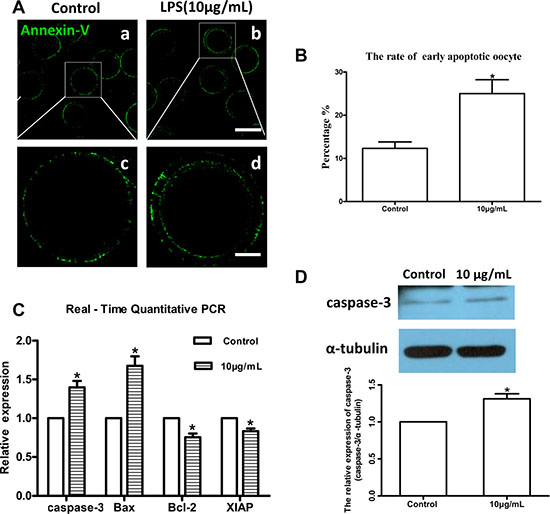 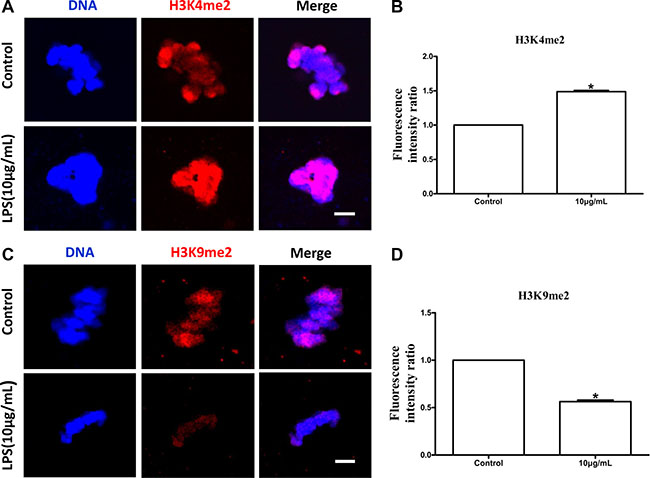 Dynamic changes in cytoskeleton are crucial for meiotic maturation and fertilization of mammalian oocyte. Lipopolysaccharide could induce meiotic failure, and perturb meiotic structures such as aberrant spindles, chromosomal ejection, or GVBD failure in in vitro matured cumulus-oocyte complexes (COCs). Our results showed that oocytes treated with lipopolysaccharide exhibited disrupted spindle bipolarity and structure, while the actin cap was not affected. Furthermore, lipopolysaccharide exposure decreased the protein level of p-MAPK. Microtubules form the bipolar spindle, which aligns the chromosomes on the metaphase plate and segregates them into the two daughter cells [32, 33], and actin filaments are responsible for the spindle movement [34]. As a regulator, MAPK plays a key role in microtubule organization and meiotic spindle assembly [35]. Thus we speculated that lipopolysaccharide perturbed spindle formation by suppressing p-MAPK level, resulting in the reduction of polar body extrusion rate of bovine oocytes.

Specific epigenetic marks, such as DNA methylation and histone modifications, are critical to confer the female gamete with meiotic as well as developmental competence during gametogenesis [42–44]. DNA methylation is of particular significance in oocyte, as it not only participates in the regulation of gene expression, but also marks specific genes, e.g. imprinted genes in embryo [45]. Incomplete methylation imprints in immature oocytes may be one of the causative factors in inducing developmental abnormalities in mouse [46]. Cheng et al. found that aberrant DNA methylation at specific CpG sites of the suppressors of cytokine signaling 1 promoter correlated with loss of gene expression in lipopolysaccharide-activated macrophages [47]. Several recent studies reported that lipopolysaccharide altered histone lysine methylations, including H3K4me2, H3K9me2 and H3K27me3 in infected cells [48–50]. H3K9me2 is involved in transcriptional repression and the maintenance of a defined expression profile during the final phase of oocyte growth and maturation [51, 52], while H3K4me2 is important for transcriptional activation [53]. SMYD3, a H3K4 methyltransferase, was expressed throughout bovine oocyte in vitro maturation and early embryonic development, which suggests that SMYD3 may play an essential role in transcription regulation in bovine [54]. In the current study, lipopolysaccharide significantly decreased the levels of global DNA methylation (5mC) and H3K9me2, whereas the global H3K4me2 levels in oocytes were increased. These results demonstrated that lipopolysaccharide could alter the epigenetic status in bovine oocytes during maturation.

In conclusion, the results of this study suggest that lipopolysaccharide can suppress the first polar body extrusion rate. The negative effects of lipopolysaccharide on maturation potential of bovine oocytes may be partly due to its cytotoxicity on cell cycle progression, meiotic spindle structure, oxidative stress, apoptosis, and epigenetic modifications.

The ovaries were harvested from a local abattoir and transported to our laboratory at 28–30ºC within 2 h. After washing three times with sterile phosphate-buffered saline (PBS), COCs were manually aspirated from antral follicles that were 2–6 mm in diameter using an 18-gauge needle. Oocytes that were surrounded by at least three compact cumulus layers and had uniform ooplasm were selected. Generally, prior to IVM, COCs were washed three times in IVM medium and 50 COCs were then incubated in 750 μL maturation medium in each well of a four-well plate (Nunc, Denmark) in air with 5% CO2 at 38.5 ºC and the maximum humidity. IVM was carried out in TCM-199 (Gibco BRL, Grand Island, NY, USA) containing 0.01 IU/mL follicle-stimulating hormone (FSH), 10 IU/mL luteinizing hormone (LH), 1 μg/mL estradiol (E2), and 10 % (v/v) fetal bovine serum (FBS; Gibco BRL).

Lipopolysaccharide was dissolved in water and diluted with maturation medium to obtain a final concentrations of 1 μg/mL and 10 μg/mL. The proportion of water in the final culture meidum should not exceed 1% after dilution with in vitro maturation medium.

After culture for 12 h or 22 h, cumulus cells were removed by repeated pipetting. Denuded oocytes were fixed in 3.7% (w/v) PFA in phosphate-buffered saline (PBS) for 1 h, and then permeabilized with PBS supplemented with 1% Triton X-100 for 1h. After washing three times in PBS containing 0.1% polyvinyl alcohol (PVA), the oocytes were blocked in 1% bovine serum albumin (BSA)/PBS for 8 h. The oocytes were incubated with H3K4me2 antibody (1:1000), H3K9me2 antibody (1:1000), p-MAPK antibody (1:200), phalloidin-TRITC (1:500), and anti-α-tubulin-FITC (1:200) antibody overnight at 4°C. After washing three times (5 min each time) in 0.1% PVA/PBS medium, oocytes were labeled with secondary antibodies for 40 min at room temperature and then incubated with 2 μg/mL 4’-6-diamidino-2-phenylindole (DAPI, Roche). Samples from each groups were transferred onto identical slides and analyzed under a confocal microscope (Olympus FV1000, Tokyo, Japan).

For staining of cellular ROS and DHE levels, the samples were incubated with 10 mM 2′,7′-dichlorofluorescin diacetate (DCHFDA) and superoxide-sensitive fluorescent dyes in the dark for 30 min, and then washed three times in washing buffer. Annexin V/PI-FITC kits were used to detect early apoptosis according to the manufacturer’s instructions. Samples from each group were transferred onto identical slides and analyzed under a confocal microscope (Olympus FV1000).

For 5 mC staining, the zona pellucid of oocytes was removed by using 0.05% pronase in PBS. All samples were then denatured in 2 N HCl meidum for 30 min and neutralized in 100 mM Tris-HCl medium (pH 8.5) for 10 min. The samples were washed three times in 1% (w/v) BSA/PBS, and then incubated with 1:500 mouse anti-5-mC antibody overnight at 4°C followed by incubation with secondary antibodies for 40 min. Then the samples were washed three times and incubated with 2 μg/mL DAPI. Samples from each group were transferred onto identical slides and analyzed under a laser scanning confocal microscope (Olympus FV1000).

At least three biological replicates were used, and the results were presented as mean ± SEM. Analysis of variance (ANOVA) was used for statistical comparisons and Duncan’s multiple comparisons test was used to analyze the differences between each group. The value of P < 0.05 was considered statistically significant.

All authors declared there were no conflicts of interest to disclosure.