Characterized by a high rate of recurrence and poor prognosis, hepatocellular carcinoma (HCC) is a severe health problem worldwide [1, 2]. Despite various treatment options, including surgical resection, local ablation, radiotherapy and chemotherapy, HCC is associated with a high mortality rate and remains an intractable illness [3]. It is therefore very important to further explore the molecular mechanisms involved in HCC to identify factors useful for the development of effective therapies that improve patient survival.

The zinc-finger transcriptional repressor Snail reportedly contributes to epithelial-to-mesenchymal transition (EMT) in HCC and plays a key role in tumorigenesis, differentiation, migration and invasiveness [4–7]. For example, Snail reportedly downregulates E-cadherin and upregulates MMP-2 expression, thereby promoting invasiveness of human HCC [8]. In addition, NF-κB is another key mediator promoting proliferation, differentiation and invasiveness in tumors [9–11]. It has been reported that Apigenin, a naturally occurring compound, may inhibit EMT in human HCC by inhibiting the NF-κB/Snail pathway [12]. In an earlier study, we showed that Snail and p65 are overexpressed in HCC tissue [13]. However, their predicted impact on the prognosis of Chinese HCC patients remains unclear.

In this study, therefore, we examined the association between Snail and NF-κB expression and tumor differentiation, which was an independent factor predictive of survival in HCC patients.

Among the 83 patients (67 male and 16 female) who met the inclusion criteria for this study, the mean age was 51.93 ± 1.488 years. Expression of Snail and NF-κB was increased in patients with HCC The immunohistochemical results summarized in Figure 1 show that normal liver tissue was negative for both Snail and NF-κB staining, whereas HCC tissue stained positively for both factors. Both Snail and NF-κB were localized in the nucleus of hepatocytes. In addition, levels of Snail were closely related to those of NF-κB (Table 1). About 94% of HCC patients were Snail-positive, while 90% were NF-κB-positive (Figure 1I). 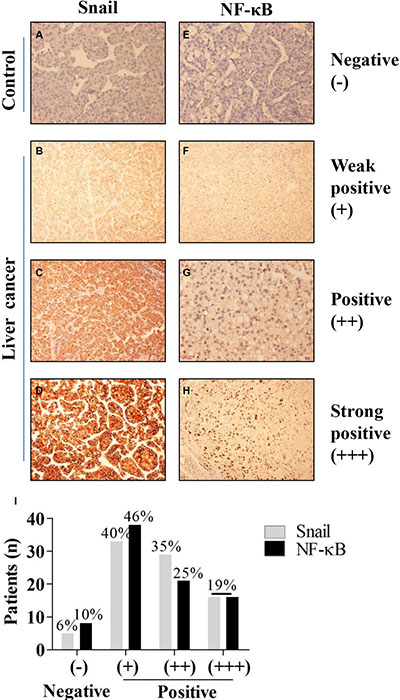 Table 1: Relation between Snail and NF-κB expression in HCC patients 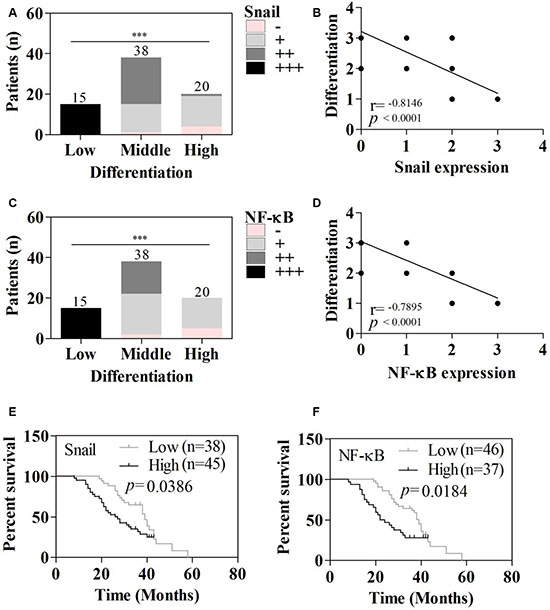 Differentiation is an independent variable closely related to patients’ survival

Table 3: Univariate and multivariate cox analyses of survival in patients with HCC

We found that there is a significant negative relation between Snail and NF-κB and tumor differentiation status, which is an independent factor affecting survival of HCC patients. These results are in agreement with earlier studies showing that by promoting EMT, Snail and NF-κB signaling accelerates proliferation, metastasis and invasiveness in cancer [8, 15, 18–21]. Snail and NF-κB may thus be predictive indicators of prognosis and useful for guiding therapy in HCC patients.

This study also has the following limitations. (1) Sample size is not very large, which means there could be bias. (2) We did not co-localize Snail and NF-κB using immunofluorescent labeling. (3) Additional in vitro studies are necessary.

Eighty-three consecutive HCC patients surgically treated at Gansu Provincial Tumor Hospital between June 1, 2008 and January 31, 2013 were the subjects of this study. Included were patients who underwent initial surgery for HCC and whose entire records were available. Patients whose records were not complete were excluded. Patients whose surgical resection was not curative were excluded from the survival analysis. Samples of benign liver tissue adjacent to the tumor tissue were taken from 10 patients as controls.

Clinical data, including gender, age, tumor size, tumor number, metastasis, differentiation, PVTT and JACC stage were collected from the patients’ records in hospital. Survival data were obtained through follow-up. Overall survival was defined as the interval between the date of surgery and death. The maximum follow-up period in this study was 5 years. Follow-up of patients who died of non-liver-related diseases was censored at the time of death.

The immunohistochemical staining procedure was performed as follows. Four-μm-thick sections from formalin-fixed, paraffin-embedded blocks were dewaxed and rehydrated, and then treated with 3% hydrogen peroxide for 10 min to block endogenous peroxidase activity. The tissue sections were then treated with boiling citric acid buffer (10 mM sodium citrate and 10 mM citric acid) for 10 min to retrieve the antigen, after which they were incubated with primary anti-Snail and anti-NF-κB antibodies (1:100 dilution) overnight at 4°C. The sections were then rinsed in phosphate-buffered saline (PBS) and incubated with EnVision polymer for 60 min. The sections were stained with freshly prepared diaminobenzidinesolution (DAB) for 8 min, counterstained with hematoxylin, and finally dehydrated and mounted. PBS was substituted for the primary antibodies in the negative controls. To assess the staining of Snail and NF-κB, the cytoplasmic immunoreactive intensity was calculated based on a 0 to 3 scoring system, where 0 = no staining, 1 = weak cytoplasmic staining, 2 = moderate cytoplasmic staining, and 3 = strong granular cytoplasmic staining [24].

Quantitative data are presented with the mean ± standard error and compared using the Student’s t test. Categorical variables were compared using the χ2 or Fisher’s exact test. Spearman correlation analysis was used to investigate the relationship between Snail and NF-κB immunoreactivity, Snail expression and survival or tumor differentiation, and NF-κB expression and survival or tumor differentiation in HCCs. Overall and disease-free survival curves were generated using the Kaplan-Meier method and compared using the log-rank test. To determine prognostic factors, multivariate regression analysis was performed using the Cox proportional hazards model for variables with P < 0.05 in the univariate Cox analyses. Values of P < 0.05 were considered significant.

All patients provided written informed consent to use their surgical materials for the study, and the Gansu Provincial Hospital Ethics Committee approved the study. In addition, all procedures in this study were carried out in accordance with the tenets of the Declaration of Helsinki.