Association between the HOTAIR polymorphisms and cancer risk: an updated meta-analysis

Purpose: LncRNA HOTAIR plays an important role in many cancer. Several studies have shown that some HOTAIR SNPs might be associated with tumor risk in case-control studies, but the results are inconsistent and inconclusive. Therefore, it is necessary to better evaluate association between the HOTAIR SNPs and the risk of cancer.

Materials and Methods: Data were collected from PubMed, Embase and Web of Science. A total of 11 case-control studies were selected for the quantitative analysis. Software Stata (Version 12) was used to calculate Odds ratios (ORs) and 95% confidence intervals (CIs) to evaluate the strength of the associations. Subgroup analysis, sensitivity analysis, and publication bias were also performed. Five HOTAIR SNPs were finally enrolled in the study.

Conclusions: HOTAIR SNP rs920778, rs7958904 and rs874945 are susceptible to cancer risk. SNP rs920778 is also a useful risk factor in evaluation of Asian population and digestive cancer. In addition, the cancer risk SNP rs874945 is first reported in the meta-analysis.

Long non coding RNAs (LncRNAs) are a class of regulatory RNAs that are longer than 200 nucleotides and lack protein coding capacity [1]. LncRNAs play critical roles in physiologic and pathologic processes, including carcinogenesis [2, 3]. In addition, lncRNAs are also involved in cellular processes such as differentiation [4], proliferation [5], apoptosis [6], metabolism [7] and autophagy [8].

Recently, genome-wide association studies (GWAS) have revealed a large number of genetic variants related to different types of cancer. For examples, Guo et al. identified 45 candidate lncRNAs regulated by noncoding SNPs in prostate cancer [9]. Yuan et al. found that a novel SNP rs114020893 in the lncRNA NEXN-AS1 gene is significantly associated with an increased risk of lung cancer [10]. However, there are some limitations in the GWAS. For examples, at least one-third of the identified variants in non-coding intervals regulatory regions modulate transcription factor binding [11, 12], but the relationship between phenotype-related loci and lncRNAs is largely unknown. Furthermore, many GWAS results have shown substantial heterogeneity in allele frequencies across different population [13]. Therefore, further study on a single candidate lncRNA gene in the development of cancer is necessary.

LncRNA HOTAIR, which is located within the Homeobox C (HOXC) gene cluster on chromosome 12 and is co-expressed with HOXC genes, is a inhibitor in the HOXD gene transcription [14]. As an oncogene, HOTAIR is overexpressed in many cancer and involved in cancer proliferation, migration, invasion, progression and poor prognosis, suggesting that it might be a potential novel target in cancer therapy [15, 16].

As a class of genetic variants, SNPs are widely used in prediction of disease risk [17] , prognosis [18] and clinical outcome [19]. Recently, several studies have summarized the associations of HOTAIR SNPs with cancer risk. However, some results are controversial. For example, two groups reported that there is no association between rs4759314 polymorphism and cancer risk [20, 21], but Qi et al. found that rs4759314 is in association with cancer risk [22]. Obviously, the association analysis between HOTAIR SNPs and cancer susceptibility is still necessary.

In the study, a total of 5 SNPs collected from 11 articles were finally enrolled for meta-analysis, three of which were significantly associated with cancer risk, suggesting they are important cancer risk factors and potential targets in future clinical study. 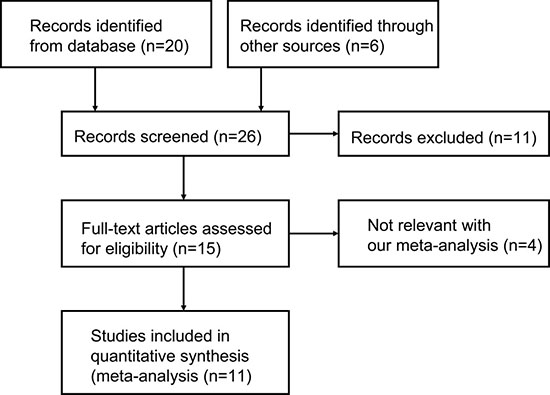 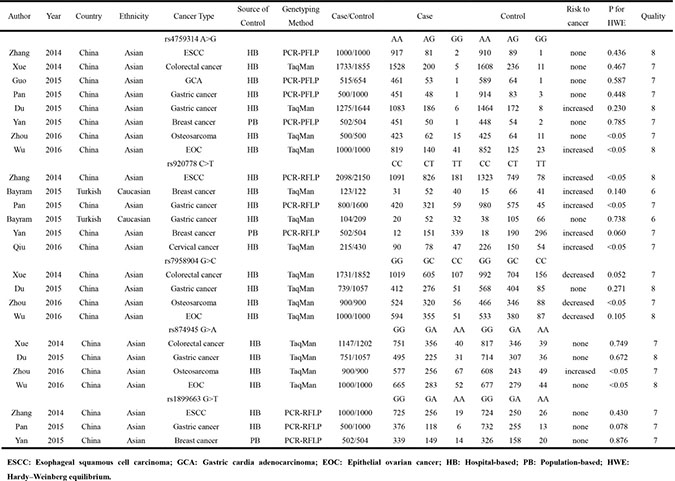 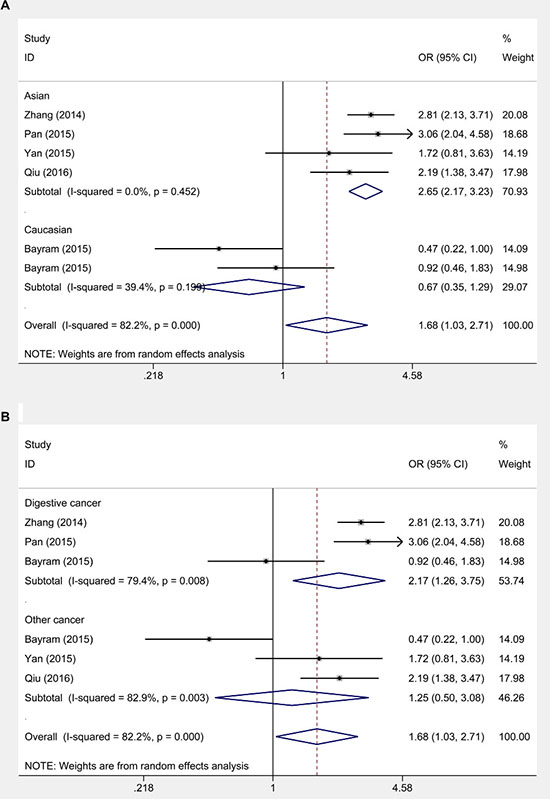 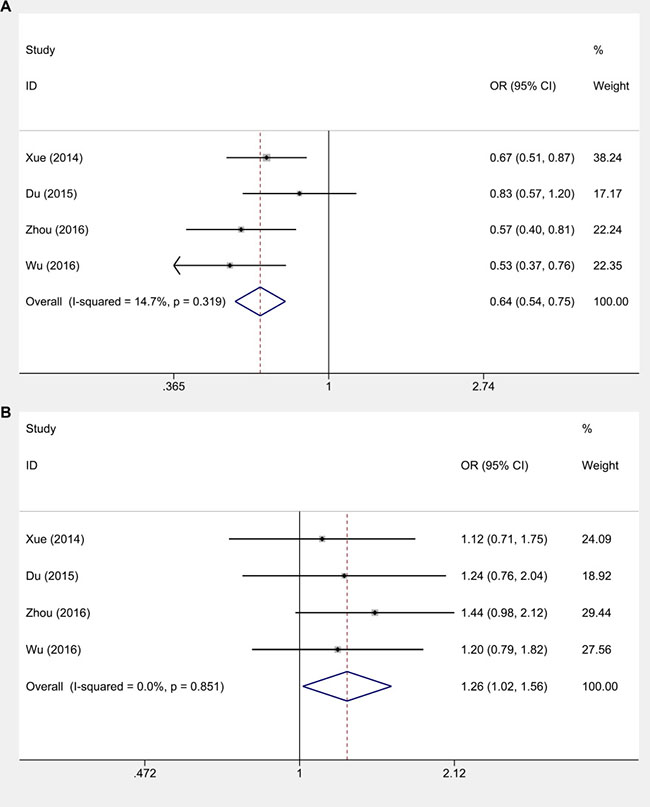 Sensitivity analysis was used to evaluate individual study’s influence on the pooled results by deleting one single study each time from pooled analysis. As a result, rs920778 in Bayram’s study [28] had a significant effect on the pooled OR. When this study was excluded in the genotype comparison of TT versus CC, the heterogeneity test was significantly reduced (data not shown). 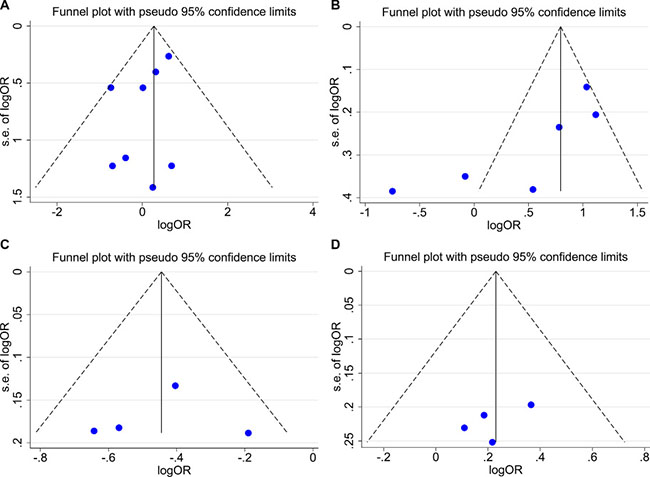 Overall, our results provide evidences that rs920778, rs7958904 and rs874945 but not rs4759314 and rs1899663 loci are related to cancer risk, among of which rs920778 and rs874945 increase and rs7958904 decreases cancer risk, respectively. In the study, we also found that rs920778 is susceptible to cancer in Asian population but not in Turks, which is in accord with Tian’s study [20]. We speculate that there are two reasons to explain the difference. First, different genetic backgrounds may contribute to divergence because the distribution of HOTAIR allele frequency varies among Asians and Caucasians. Second, different populations have various lifestyles and are influenced by different environmental factors.

Previously, four papers have discussed the association of HOTAIR polymorphisms with cancer risk by meta-analysis [20–22, 34]. In comparison with these studies, our meta-analysis has the following characteristics (Table 5). In the study, we have selected 11 related articles more than that in any study mentioned above. The enrolled SNPs and cases including patients and controls in our study are also much more than those in any study, implying that our assessment of the relationship between the HOTAIR gene SNPs and cancer risk is relatively more precise. As for rs920778 polymorphism, all five meta-analysis studies including ours have same results which indicate that the polymorphism can increase cancer risk, especially in Asian population and digestive cancer. However, Bayram et al. did not find association of rs920778 to gastric cancer in a Turkish population by a case-control study [28]. For SNP rs4759314, all five meta-analysis studies showed that the SNP is not a risk factor of cancer. For rs1899663, our study together with other three studies also obtained the negative association of the polymorphic site to cancer risk. Same to Zhang’s group study [21] , our group study showed that rs7958904 site decreases cancer risk. In addition, we first analyzed the association of rs874945 to cancer risk. As a result, the polymorphic site decreases the risk of cancer.

Table 5: The characteristics and comparison of different meta-analysis

Zhang et al. identified a intronic enhancer between +1719bp and +2353bp from the transcriptional start site of HOTAIR gene and the SNP rs920778 is just located in the region. Moreover, they found that the SNP can increase HOTAIR RNA expression by altering the enhancer activity in esophageal squamous cell carcinoma [23]. As a SNP in the coding sequence, rs7958904 does not alter HOTAIR transcript, but it is predicted to change the secondary structure of HOTAIR, indicating that the SNP deregulates HOTAIR expression by affecting the gene structure, leading to carcinogenesis [24]. SNP rs874945 is near 3′ region of the HOTAIR gene. It is well known that gene 3′ region is a regulatory target of coding gene products [35]and non-coding genes such as microRNA [36]. It has been reported that SNP rs1126579 in the CXCR2 gene 3′ region disrupts the binding site for miR-516a-3p, lead to a moderate increase in CXCR2 mRNA and protein expression, and increased MAPK signaling [37]. Even though SNP rs874945 functional study is not reported, we speculate that it functions by interfering the bind with other coding gene products and non-coding genes.

However, there are several limitations to the present study. Few studies were included in this meta-analysis, and this small sample size limits the power to detect the associations. Because the power of funnel plots, Egger’s and Begg’s test of publication bias may also greatly constrain our analysis, our conclusions should be interpreted cautiously. For examples, there was a slight publication bias in the studies on rs920778. We think that only English language studies selected in the study partially contributes the bias. In addition, subgroup analyses of the rs7958904, rs874945 and rs1899663 loci were not performed because the sample size in each study was relatively not large enough.

In conclusion, HOTAIR SNP rs920778, rs7958904 and rs874945 are cancer risk factors, among of which rs920778 is also useful in evaluating cancer risk of Asian population and digestive cancer. Moreover, rs874945 as a cancer risk SNP is first reported in the meta-analysis.

We performed a publication search using PubMed, Embase and Web of Science updated on June 29,2016. The following search terms were used: “HOTAIR OR HOX transcript antisense intergenic RNA”,”polymorphism OR variation OR variant OR mutation”, “cancer OR carcinoma OR tumor OR tumour OR neoplasm”, respectively. Searching was done without restriction on language or publication years. Inclusion criteria for studies were as followings: (1) articles on HOTAIR polymorphisms and cancer risk; (2) case-control studies; (3) studies that had detailed genotype frequency of cases and controls or could be calculated from the paper text. Exclusion criteria included: (1) abstract, comment, review; (2) duplication of the previous publications; (3) lack of usable genotype frequency data.

Based on the inclusion criteria, two reviewers (ZX Zhang and WN Fu) independently extracted information from all eligible publications. The following information were included in each study: name of first author, year of publication, country, ethnicity, cancer types, source of control, genotyping method, numbers of cases and controls, allele as well as genotype frequencies for cases and controls, P value for Hardy–Weinberg equilibrium (HWE), article quality. Different ethnicity descents were categorized as Asians or Caucasians. Study design was stratified into population-based and hospital-based studies. Any disagreement was resolved through discussion until the two reviewers reached a consensus.

Two reviewers (ZX Zhang and X Tong) independently assessed the quality of the included studies according to the Newcastle Ottawa Scale (NOS) (http://www.ohri.ca/programs/clinical_epidemiology/oxford.asp). The scale consists of three components related to sample selection, comparability and ascertainment of exposure.

HWE was evaluated using Chi-square test in control groups of each study. Strength of association between HOTAIR SNPs and cancer risk was assessed by odds ratios (ORs) with 95% confidence intervals (CIs). Statistical significance of the pooled OR was determined by Z test. Pooled ORs were used to calculate allele frequency comparison ( rs4759314: G versus A, rs920778: T versus C, rs7958904: C versus G, rs874945: A versus G,rs1899663: T versus G). Five different ORs were calculated according to allele contrast model, dominant model, recessive model, heterozygote comparison and homozygote comparison. Subgroup analyses were performed by cancer types and ethnicities. Heterogeneity degree between different studies was determined by Q-statistic [44, 45]. If there was no significance in heterogeneity degree, the fixed effect model (Mantel-Haenszel method) would be used [46]. Otherwise, the random effect model (DerSimonian and Laird method) would be used [47]. Heterogeneity effect was then quantified by I2 test. I2 statistics represented the proportion of variation across studies due to between-study heterogeneity, and the values of 25%, 50% and 75% were regarded as cut-off points for low, moderate and high degrees of heterogeneity, respectively [44]. Sensitivity analysis was performed to evaluate the stability of the results. Publication bias was evaluated by funnel plot and quantified by Begg’s test and Egger’s test to assess funnel plot asymmetry [48, 49]. Meta-analyses were performed with the software Stata (Version 12, College Station, Texas, USA). All statistical tests were two-sided and p < 0.05 was considered statistically significant.