Esophageal squamous cell carcinoma (ESCC) is one of the most deadly tumors worldwide, with 5 year survival of only 10%. ESCC related death rates are particularly high in China, in part due to the lack of early screening tools and limited treatment options [1].

Several clinicopathological features have been associated with high metastatic risk in superficial ESCC, including invasion depth, tumor size, angiolymphatic invasion and histological differentiation [4–6]. ESCCs are also characterized by CNAs [7, 8]. Among those characteristic CNAs, amplifications of 11q13.3-13.4 (CCND1), 3q26.33 (SOX2), 8q24.2 (MYC) and deletion of 3p14.2 (FHIT) have been associated with metastatic diseases [8–12]. Nevertheless, a comprehensive set of CNAs that can be used to predict metastasis risk in clinical samples are not yet available and would be important to select the appropriate treatment option for superficial ESCCs.

Genomic instabilities, in the form of chromosome instability (CIN), microsatellite instability (MIN) and point mutations, are characteristic for human cancers. CIN, including chromosome structural and number changes, is a major form of genomic instability [13]. According to their size, CNAs can be classified into focal or arm-level CNAs. Focal CNAs are very informative and often involve important oncogenes or tumor suppressor genes [14–17]. CNAs could be detected by next-generation sequencing, comparative array genomic hybridization or single nucleotide polymorphism (SNP) microarray. The OncoScan® assay is a SNP microarray including over 220,000 SNPs across human genome with increased probe density within 891 cancer related genes and are uniquely suited to detect subtle CNAs with high sensitivity and specificity. 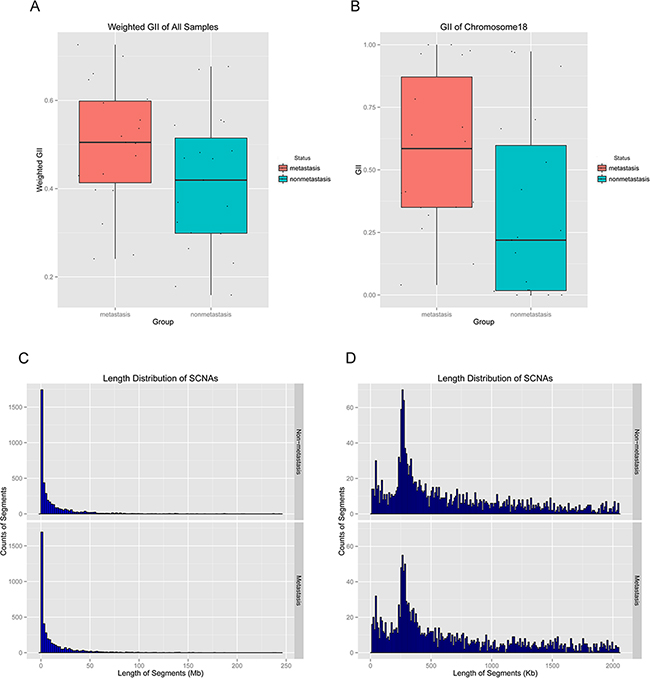 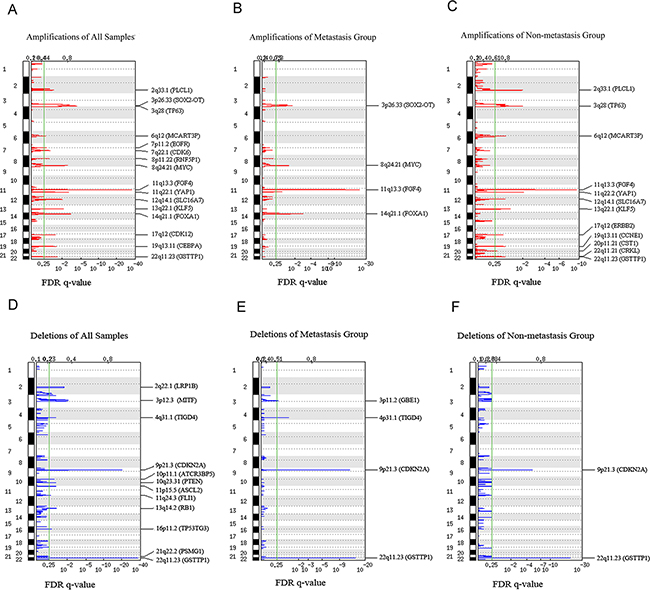 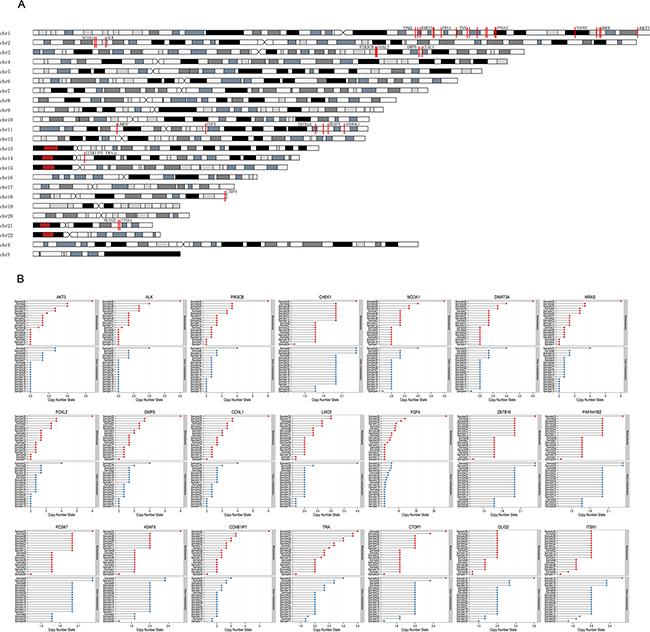 The main purpose of this study is to identify CNAs that could differentiate superficial ESCC patients with high risk of metastasis. Although several whole genome copy number analyses on ESCC have been reported, there has been no systematic study on superficial ESCC. In this study, we used Affymetrix OncoScan™ (SNP microarray) to analyze genome wide CNAs of 38 superficial ESCCs and compared recurrent focal CNAs level, and the CNAs of 891 cancer genes between ESCCs with and without metastasis.

The Oncoscan SNP microarray is an ideal platform to perform analyses on FFPE-derived tumor materials with increased probe density within 891 cancer genes at 50-100 kb resolution. Among the 891 cancer genes, 39 cancer genes had significantly different CNAs between the metastasis and non-metastasis cases. These genes might represent candidate biomarkers for superficial ESCC patients with high risk of metastasis after surgery. Previous studies focus on using gene expression profiles to guide prognosis prediction and diagnosis [18, 19]. Here we suggested that DNA copy number may be used for the same purpose with the advantage of being more stable [20]. FGF4, PIK3CB, MRAS, ALK, LMO2, AKT3 and CHEK1 genes were included in the 39-gene signature. Copy number of CHEK1 gene was significantly lower in metastasis than in non-metastasis groups (p = 0.017). Checkpoint kinase 1 (Chk1) which encoded by CHEK1 gene trigger cell cycle arrest upon DNA damage [21] Although CHEK1 was initially thought to be a tumor suppressor gene due to its role in checkpoint activation and cell cycle arrest, several studies documented a positive correlation between Chk1 expression and tumor grade and disease recurrence, suggesting that Chk1 may promote tumor growth [22–24]. So the role of CHEK1 in ESCC should be explored further. In addition, FGF4 gene located in 11q13.3 was also recurrently amplified in superficial ESCC.

In discovery and validation experiments, there were 88.5% (23/26) cases showed the identical copy number aberrations of CCNL1 gene, and 76% (19/25) cases for PIK3CB gene. The difference of calculation of copy number alterations in these two experiments might lead to inconsistency of results.

The recurrent focal CNAs which determined by GISTIC2.0 were more likely to identify cancer-causing genes [14, 25]. Among all 38 superficial ESCC samples, recurrent focal amplifications of 11q13.3 (FGF4 and FGF19), 8q24.21 (MYC), 7q22.1 (CDK6) and deletions of 9p21.3 (CDKN2A), 3p12.3 (MITF), 2q22.1 (LRP1B), 13q14.2 (RB1) which were previously reported in all stage of ESCC [8, 11, 12, 26–30] were also found in our study. This indicated that those CNAs might be the driver events in early stage of ESCC. In addition, amplification of 11q21.1 (FOXA1), which has not been previously reported as associated with ESCCs, was found in 20 cases (52.6%) in our study. Forkhead box protein A1 (FOXA1), the representative member of the Forkhead-box (FOX) proteins subfamily, is a DNA-binding transcription factor. Amplification of FOXA1 gene has been found in lung cancer, esophageal adenocarcinoma, [31] estrogen receptor (ER)-positive breast cancer [32] and anaplastic thyroid cancer [33]. And the levels of FOXA1 protein have been correlated with the prognosis of breast cancer and gastric cancer [34, 35]. Deletions of 22q11.23 (GSTT1, GSTTP1, and GSTT2) occurred in 20 superficial ESCC samples (57.9%) in our study. Glutathione S-transferase (GST) theta 1 (GSTT1) which encoded by GSTT1 gene is a member metabolizing dimeric phase II enzymes superfamily. These enzymes play a vital role in cellular defense system by catabolism of a broad range of xenobiotics and carcinogen [36, 37]. Many previous studies have found that GSTT1 gene deletion polymorphisms increases susceptibility to lymphoma, breast cancer, colon cancer and lung cancer [38–40]. So the results of our study suggested that the role of GSTT1 deletion in the etiology of ESCC should be explored further.

Amplifications of 3p26.33 (SOX2-OT), 8q24.21 (MYC), 14q21.1 (FOXA1) and deletion of 3p12.1 (GBE1) were found as the recurrent CNAs in metastasis group only, which indicated that those CNAs might be associated with metastasis in superficial ESCC. Deletion of 3p12.1 (GBE1) has been associated with prognosis in cervical cancer [41], but not in ESCC previously. Sex determining region Y-box 2 (SOX2), a key transcription factor involved in self-renewal and pluripotency of embryonic stem cells, plays an important role in tumor cell metastasis and apoptosis [42]. SOX2 gene embedded in the introns of SOX2 overlapping transcript (SOX2OT) gene, which encodes a long non-coding RNA (lncRNA) [43]. Amplifications of SOX2 have been associated with metastasis or poor prognosis in previous studies of ESCC [9, 44–46]. In our study, amplification of SOX2OT gene on 3p26.33 was found as recurrent CNA in metastasis group. SOX2OT gene encodes the lncRNA which have been demonstrated that involved in regulation of SOX2 expression and/or other related processes. And expression of SOX2 and SOX2OT were concordant in ESCC and breast cancer [47, 48]. The role of SOX2OT gene and expression in ESCC metastasis should be explored further.

Thirty eight superficial ESCC patients, at stage T1N0M0, were collected from Cancer Hospital, Chinese Academy of Medical Sciences between 2004 and 2010. The most recent follow-up visit was dated in June 2015 and the follow was conducted via telephone interview or clinical data consultation. Among the 38 cases, 19 metastasis cases have lymph node metastasis or distant metastasis within five years from radical surgery, and the 19 metastasis-free cases have no detectably metastasis within five years after radical surgery. All the patients underwent radical resection without radiotherapy or chemotherapy prior to surgery. The clinicopathological characters of 38 patients were summarized in Table 2. The Institute Review Board of the Cancer Hospital, CAMS, agreed to waive the need for consent for this study and approved the study protocol.

Genomic DNA were extracted from formalin-fixed and paraffin-embedded (FFPE) tissues of 38 superficial ESCCs using QIAamp DNA Mini kit (Qiagen, Hilgen, Germany) according to the manufacturer’s instruction. H&E sections of all cases were reviewed to manually identify areas with minimum of 85% malignant cells for microdissection.

Molecular Inversion Probe (MIP) based Oncoscan Array was used to detect CNAs, loss of heterozygosity, and somatic point mutations. The experiments were performed according to the user guide of Affymetrix OncoScan™ FFPE Assay Kit (Affymetrix, CA). Briefly, 75 ng FFPE DNA were hybridized to MIP probes and allowed to anneal 58°C overnight (16-18h) after denaturation at 95°C for 5 min. Then each sample was split into two tubes and gap fill reaction was performed by adding dATP (A) and dTTP (T) (A/T) in one tube and dGTP (G) and dCTP (C) (G/C) to another. After removing the un-circularized MIP probes through exonuclease treatment, the cleavage enzyme was added to linearize the gap-filled circular MIP Probes. Then the circular MIP probes were amplified by first and second round PCR. The enriched product was digested by HaeIII enzyme and the 44bp fragments were hybridized to the OncoScan™ Array for 16-18h. The hybridized arrays were washed, stained using the GeneChip® Fluidics Station 450 and scanned through GeneChip® Scanner 3000 7G (Affymetrix, CA).

Real Time PCR (qPCR) was used to validate CNAs of CCNL1 and PIK3CB genes with the internal control HBB gene using SYBR-Green II fluorescence and Mx3005P System (Agilent Technologies, CA, USA)) (Supplementary Table S4). The results were analysed using the MxPro QPCR software. Comparative CT method was used to calculate the copy numbers of target genes. Cases with 2-ΔΔCT > 1 were considered as amplification of genes, and cases with 2-ΔΔCT < 1 were considered as deletion of genes [49].

The intensity (CEL) files generated by the scanner were imported into Oncoscan Console Software (Biodiscovery, Inc., CA USA) and analyzed by the Affymetrix TuScan algorithm (a modified ASCAT algorithm) to create segmentation to differentiate between adjacent clusters of probes and determines the CNAs. Amplification was defined as copy number which was calculated using Affymetrix TuScan algorithm > 2, and copy number < 2 was considered to be deletion. In addition, the copy number information of 891 cancer genes were obtained as Gene Report text files from the Console software.

The recurrent CNAs were determined using GISTIC2.0 (Genomic Identification of Significant Targets in Cancer) with a Q-value cutoff < 0.25. And the significant recurrent focal CNAs has a 90% likelihood of containing the targeted genes.

The Mann-Whitney U-test was used to detect the significantly different CNAs of 891 cancer genes between metastasis group and non-metastasis group. And then, hierarchical clustering was performed on significantly differential CNAs of cancer genes. Pheatmap function in R pheatmap package was used to draw heat maps to visualize the clustering results.

Genome instability index (GII) was used to evaluate the levels of DNA copy number changes in all 38 samples. To take the variation of chromosome size into consideration, weighted GII was used. First, percentage of aberrant SNPs for each chromosome was calculated separately to obtain GII of each chromosome. For individual chromosome, numbers of SNPs with aberrant copy number were divided by numbers of all SNPs in each chromosome to get the GII of each chromosome. Then the mean percentage aberration of all 22 autosomes in each sample was calculated to generate the weighted GII [50, 51]. Paired t-test was used to compare the difference between metastasis and non-metastasis groups (p < 0.05). All the statistical analyses were performed on R (version 3.2.1). Significance were deemed as < 0.05 for all statistical analyses.

All authors would like to thank Ying Yang for help in technique support, and Peng Zhang and Xuexin Yu for help in data analysis.

Professional judgment concerning a primary interest would not be influenced by a secondary interest. There is no financial/personal interest or belief that could affect objectivity.

This work was supported by project grants from National Natural Science Foundation of China (81272308), the PUMC Youth Fund and the Funderental Research Funds the Central Universities (3332013162), the Youth Backbone Program (to Jianming Ying) of Cancer Hospital, CAMS, Beijing, China.