Oral cancer is the most common cancer among head and neck carcinomas, which is becoming a major health problem particularly in developing countries [1]. According to recent data from the National Central Cancer Registry of China, the age-standardized rates of oral cancer in the Chinese population were 2.22/100,000 in 2011 and data shows that there is an increasing tendency in the incidence [2]. Moreover, the prognosis of oral cancer was not significantly improved in the past decades, a relative overall survival rate of 81.7, 61.7 and 54.9% at 1, 3 and 5 years, respectively in the US [3].

Despite being heavily influenced by age, tumor stage, sites, and histological grading, the survival rate of oral cancer patients is influenced by many other factors such as the time between disease and perception, related treatment, access to health-care services, educational levels and occupation of the patients, behavioral/cultural factors, exposure to risk factors such as chewing tobacco [4–8].

Although several studies evaluated the influence of these social factors on survival rate of oral cancer, most of the studies do not make proper assessments considering the potential confounding factors or with limited sample size. Thus far, large scale prospective study about prognosis of oral cancer in China was still absent. The objective of this study is to determine whether clinical features, histopathology, and socio-economic status will influence the survival of patients with oral cancer in Southeast China.

Table 1: Results of univariate analysis of prognostic factors for survival in oral cancer

In the univariate Cox regression model, surgery is a potential protective factors. However neither chemotherapy nor radiotherapy was found significantly associated with the prognosis of oral cancer. Thus we made further analysis of the effects of treatment on survival in different clinical and pathological grading separately, results of which were presented in Table 2. For oral cancer patients with earlier clinical stage (I–II), when compared with surgery alone, surgery plus chemotherapy [0.91 (0.51, 1.63)] , radiotherapy [0.92(0.41, 2.06)] or chemoradiotherapy [1.48 (0.84, 2.61)] did not shown significant statistic correlation with survival, after adjusting gender, age, BMI, occupation, origin, education, drinking, smoking, and family history. Similarly, in patients with advanced clinical stage (III-IV), when compared with surgery alone, surgery combined with chemotherapy [0.84 (0.53, 1.35)] or chemoradiotherapy [0.75(0.49, 1.13)] showed no better prognosis. Only surgery combined with radiotherapy [0.57(0.33, 0.99)] showed benefit effects. With regard to pathological grading, no significant differences were observed among surgery, chemotherapy, radiotherapy or chemoradiotherapy.

Table 2: Stratification analysis for evaluating the effect of treatment on survival [HR (95%CI)]

Table 3: Results of multivariate analysis of prognostic factors for survival in oral cancer 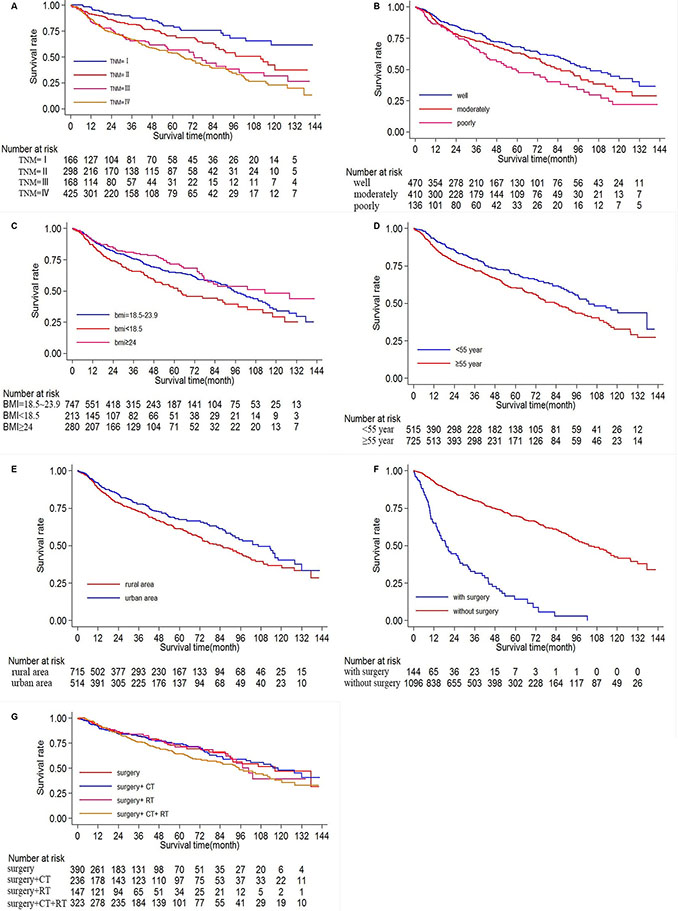 Oral cancer is a disease strongly influenced by social factors [5, 7, 9]. Previous studies have demonstrated that the illness process is treated differently in the population with a lower level of education and income. This has led some authors to consider oral cancer as a disease that is characteristic of people with a low economic and educational level. In Brazil, patients with a lower income and education level had a higher mortality rate due to oral cancer [6]. Similar results were found in a study in Taiwan [9]. In this sample, univariate analysis found that office worker, origin of urban area were protective factors. In further analysis, patients of origin were of significance in the multiple Cox regression model, which indicating that patients with high economic levels have better prognosis and socioeconomic factors may have a strong influence on the delayed diagnosis and choice of treatment. However, we did not find education is related to survival in this population.

Several epidemiologic studies in different head and neck sites have examined the association between alcohol consumption and smoking prediagnosis and survival with conflicting results [10–13]. A multicenter population-based case–control study of laryngeal and hypopharyngeal cancer carried out in six European regions, reported that alcohol drinking affects the survival, albeit to a limited extent [14]. Stefania Boccia [15] stated that cigarette smoking was a negative prognostic factor for those current smokers before diagnosis of oral cavity cancer, and excessive alcohol use was associated with an increased hazard of overall survival. However, more recent studies that have examined the effect of alcohol drinking and smoking on survival reported opposite results [10, 11, 13]. In our study, univariate analysis showed that both drinking and smoking at diagnosis predict poor survival. However, these patterns did not persist after adjustment for significant prognostic factors in a multivariate model.

For a long time, obesity has been thought to be a preoperative risk factor for surgery due to its association with numerous complications, such as cardiovascular, pulmonary and metabolic disorders, which may result in increased postoperative morbidity [16]. However, previous authors have shown that obesity may be correlated with a favorable long-term prognosis in gastric cancer, head and neck cancer, breast cancer et al. [17–20]. Although a high BMI has been thought to be associated with a poorer short-term outcome than a low BMI due to simplicity and steadiness of surgical procedure in gastric cancer [21], the prognostic implications in oral cancer are unknown. In Our study, we showed that prognosis of the overweight patients was better than that of the normal- and low-BMI groups, even though the comparison between the normal- and high-BMI groups did not reach statistically significance. Multivariate analysis showed that a low BMI was an independent predictor of a poor prognosis. It is well known that patients with advanced cancer experience weight loss and poor nutrition, especially for oral cancer patients. Cancer lesions in the oral area may cause dysphagia, odynophagia, or alteration of taste and appetite, leading to a reduction of overall caloric intake and weight loss. Moreover, patients with adjuvant therapy are usually suffered from severe side effects, so low BMI patients are easily to be suffer from malnutrition, thus expecting worse prognosis. However, we did not find difference between normal- and high-BMI groups, probably because of the limited number of patients with extremely high BMI in a Chinese population. In fact, only 42(3.4%) patients are with a BMI ≥ 28 kg/m2 in the study, so the data may not be sufficient enough to reveal the association between obesity and prognosis.

For the treatment of oral cancer, it is still controversial. Usually, surgical treatment is preferred in the initial oral cancer, and the cases of progressed oral cancer with cervical lymph node metastasis can be provided with surgical treatment along with chemotherapy and radiation therapy [22]. Previous studies reported that overall survival and disease-specific survival was significantly higher in the surgically treated group compared with no surgery group in oral cavity squamous cell carcinoma [23–25]. Surgery and/or radiation therapy provides disease-specific survival benefit as compared with no therapy within the head and neck region [26]. On the other hand, some other studies indicated that radiotherapy plays an important role in the local control of small volume tumors, such as those of the T1–2 category [27–29], in head and neck squamous cell carcinoma. However, the efficacy of radiation therapy alone was shown to be reduced in cases of T3–4 category tumors. Addition of adjuvant radiotherapy to surgery did not significantly alter the 5-year local control rate or the overall survival rate in oral cavity squamous cell carcinoma patients with pT1–3N0 disease [30]. In our study we observed that patients underwent surgery had better survival than patients without, while combined with radiotherapy showed benefit effects in oral cancer patients of advanced clinical stage III-IV.

The present study was approved by the Institutional Review Board (IRB) of Fujian Medical University, and has been performed in line with the ethical standards laid down in the 1964 Declaration of Helsinki and its later amendments. Informed consent was obtained from all individual participants included in the study.

Sociodemographic information and lifestyle histories of patients were obtained at baseline by trained interviewers through the use of a standardized questionnaire. The subjects were considered smokers if they had smoked at least 100 cigarettes during their lifetime, and those who had consumed at least 1 drink/week for at least 6 months continuously were considered alcohol drinkers [32]. BMI values were categorized according to the Chinese definitions (< 18.5, 18.5–23.9, ≥ 24.0 kg/m2).

Guidelines for surgery were in accordance with the recommendations of National Comprehensive Cancer Network, USA, Tumors were widely excised with > 1.5 cm safety margins (both peripheral and deep margins). Classic radical or modified neck dissections of levels I to V were performed in patients with clinically positive nodal disease. Supraomohyoid neck dissection of levels I to III was carried out in all patients with clinically negative necks in CT or MRI. Bilateral neck dissections were done when the primary tumor contacted or crossed the midline. Surgical defects were repaired with primary closure andlocal or vascularized free flaps.

Excluding those with poor general condition or unwilling to comply, Postoperative RT or concurrent chemoradiotherapy (CRT) was performed in patients with at least one of the following conditions: (1) a positive resection margin; (2) perineural invasion; (3) lymphovascular invasion; (4) ≥ 2 pathologically positive nodes; and (5) extracapsular extension of cervical nodes. RT or concurrent CRT was scheduled within 4 to 6 weeks after the operation.

As for radiation, the technique of 3D conformal RT or intensity modulated RT was used, with a linear accelerator using 6 to 10 MV X-ray to cover the surgical field with 1- to 2-cm margins and regional cervical lymphatics. For 3D conformal RT, the patients were initially treated with wedged-field technique to spare the contra lateral parotid and neck. The field covered the primary tumor and neck with a conventional fractionation of 2 Gy per fraction, 5 consecutive fractions per week for 44 to 50 Gy. Subsequently, the radiation field was narrowed down and focused on the primary tumor and metastatic neck toboost to a total dose of 60 to 66 Gy. For intensity modulated RT, dose painting with simultaneous integrated boost technique was applied. A total dose of 60 to 66 Gy were prescribed in 30 to 33 fractions with conventional fractionation. The beam angle was carefully selected to reduce the irradiation of the contralateral parotid and neck.

Potential prognostic factors included in the study was firstly analyzed by univariate Cox regression and then further tested by multivariate cox regression analysis with hazard ratio (HR) and 95% confidence intervals (CIs) calculated. Stratified analyses by potential effect modifiers were performed with adjusted Cox regression model. The survival rate was calculated using the Kaplan Meier method, and the log rank test was performed for significance test of the predicted prognosis factors. All analysis were performed using Statistical significance was considered at P < 0.05.

We are grateful to the subjects participated in the study. We thank for the staff members of The First Affiliated Hospital of Fujian Medical University for contributing to the collection of data.