Objectives: Elevated plasma fibrinogen (Fib) correlated with patient’s prognosis in several solid tumors. However, few studies have illuminated the relationship between preoperative Fib and prognosis of HCC after liver transplantation. We aimed to clarify the prognostic value of Fib and whether the prognostic accuracy can be enhanced by the combination of Fib and neutrophil–lymphocyte ratio (NLR).

Materials and Methods: Data were collected retrospectively from 130 HCC patients who underwent liver transplantation. Preoperative Fib, NLR and clinicopathologic variables were analyzed. The survival analysis was performed by the Kaplan-Meier method, and compared by the log-rank test. Univariate and multivariate analyses were performed to identify the prognostic factors for DFS and OS.

Conclusions: Preoperative Fib is an independent effective predictor of prognosis for HCC patients, higher levels of Fib predict poorer outcomes and the combination of Fib and NLR enlarges the prognostic accuracy of testing.

Hepatocellular carcinoma (HCC) is an aggressive malignancy and the third most common cause of cancer-related deaths worldwide [1, 2]. The prevalence of cirrhosis among HCC patients was approximately 80% [3], making liver transplantation the optimal treatment. The golden criteria for HCC patient selection now is Milan criteria. However, though excellent outcomes in patients meeting the Milan criteria, nearly 15% to 20% of patients still develop tumor recurrence [4, 5]. Instead, some patients exceeding the Milan criteria may have favorable outcomes. For the Milan criteria is based only on preoperative imaging diagnosis, without consideration of the tumor biology. Moreover, biopsy is not very suitable for diagnosis and grading of HCC because of the risk of tumor seeding [6]. Therefore it is important to search for some effective preoperative serum biomarkers to identify patients at a high risk of recurrence or metastases, and provide personalized therapy to improve the clinical outcomes.

A rising evidence for an interactive relationship between the hematological system and tumor biology has been documented [7]. Tumor cells can activate the coagulation pathway, and the tumor-mediated activation has been demonstrated to promote angiogenesis, tumor growth and hematogenous metastasis [8, 9]. Fibrinogen (Fib) is a glycoprotein synthesized by hepatocytes. It plays an important role in coagulation and can be recognized by integrin and nonintegrin receptors on various types of cells, such as, stromal, inflammatory and tumorous cells. These fibrinogen-mediated receptors have been reported to control cell proliferation, apoptosis, and migration as well as the expression of inflammatory mediators [10–12]. Davalos [13] had also revealed Fib played a proinflammatory role in cancer. Another proinflammatory factor affecting the prognosis is neutrophil–lymphocyte ratio (NLR) index. It reflects inflammatory response of the host to cancer as well as the systemic inflammation mediated by tumor [14]. Previous studies have shown that preoperative hyperfibrinogenemia and NLR were associated with the progression and poor prognosis of several cancers, such as colorectal [15], gastric [16], pancreatic [17], and lung cancer [18], biliary tract cancer [19], HCC [20]. However, the relationship between plasma Fib concentration and prognosis of HCC patients with after liver transplantation is not very clear, especially the prognostic value of Fib in combination with NLR has not been determined.

Therefore, this study aimed to clarify the prognostic value of Fib in HCC after liver transplantation, and to demonstrate whether the prognostic accuracy can be enhanced by the combination of Fib and NLR. 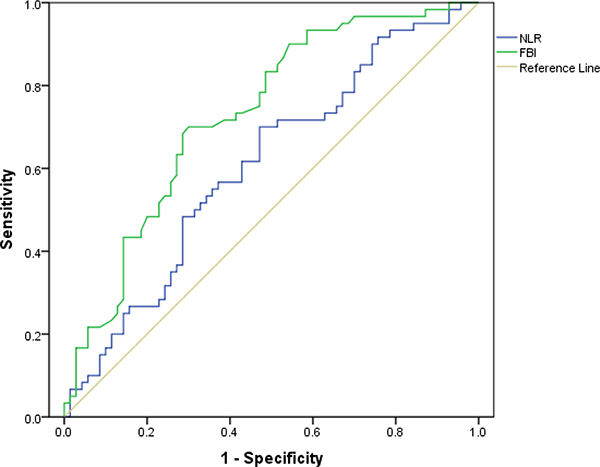 Figure 1: Determination of the cut-off value for Fib, NLR in HCC patients with liver transplantation.

Associations of Fib and NLR with clinicopathologic characteristics of HCC

HR: hazard ratio; CI: confidence interval. Other abbreviations as in Table 2 and 3.

Association of Fib with overall and disease-free survival rates

Figure 6: Kaplan-Meier survival curves of patients beyond Milan criteria. Fib > 2.345 g/L significantly correlated with shorter DFS (A) and OS (B). 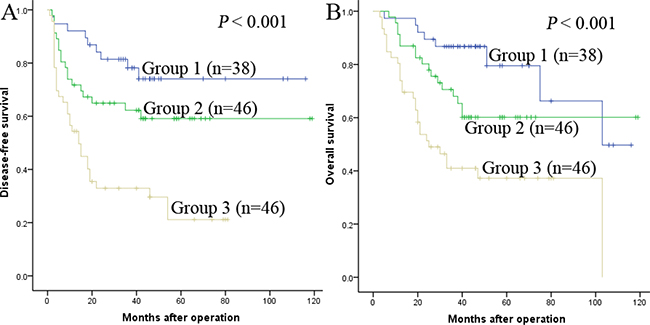 Fibrinogen, a dimeric glycoprotein, is synthesized by hepatocytes. As a key substance in clot formation, fibrinogen contributes in wound healing. After being converted to fibrin, it accelerates platelet aggregation by binding to platelets. Several studies have shown that many types of malignant cells overexpress fibrinogen receptors [28, 29]. So the fibrinogen may take part in the adhesive interaction among tumor cells or endothelial cells, and lead to hematogenous metastasis [30, 31]. Elevated levels of plasma fibrinogen are reported to be an useful prognostic predictor for several types of human cancers [15–19]. So we aim to clarify the prognostic ability of fibrinogen in HCC patients after liver transplantation.

Through a further analysis, we caught that a shorter survival of HCC patients after LT with preoperative Fib > 2.345 g/L had been recorded in this study. The 1-, 3- and 5-year DFS and OS rates of patients with high level of preoperative Fib were markedly poorer than the low level group. The mechanisms may be that fibrinogen fragments can promote neovascularization and cell adhesion in tumor [32–33], whereas fibrinogen depositing in tumor tissue facilitates tumor metastasis by serving as an extracellular matrix for the adhesion and migration of tumor cells [34–35]. So preoperative fibrinogen levels may be used to predict tumor progression and metastasis.

In order to elucidate the prognostic ability of Fib in different subgroups of HCC patients, we found that Fib had noteworthy prognostic value for both DFS and OS in patients AFP ≤ 400 ng/ml, namely, the preoperative Fib can predict the prognosis for patients whose AFP is negative. In addition, in the subgroup of the largest tumor size ≤ 5 cm, tumor number ≤ 3 and beyond milan criteria, preoperative Fib > 2.345 g/L also appeared noticeable prognostic value in predicting poorer DFS and OS. Therefore, these results provided adequate evidence that preoperative Fib could act as a potential prognostic marker to predict survival in HCC patients after liver transplantation, particularly for the different kinds of HCC subgroups.

Both Fib and NLR are proinflammatary prognostic factors. Qi [25] had demonstrated a positive correlation betweem plasma fibrinogen levels and NLR. Arigami [36] had discussed the prognostic value of Fib in combination with NLR (F-NLR) in patients with esophageal squamous cell carcinoma, and found a close relationship between cancer progression and the F-NLR score. So in our study we tried to explore whether the prognostic value could be expanded by the combination of them. Noteworthiness, First, we found NLR was correlated with AFP. NLR was showed to be a significant prognostic factor for DFS/OS of HCC in univariate analysis, but not in multivariate model. Second, our research displayed that the combination of Fib and NLR predicted the prognosis better than either one alone, patients with NLR ≤ 1.84 and Fib ≤ 2.345 g/L had the highest DFS and OS rates, patients with NLR > 1.84 and Fib ≤ 2.345 g/L or with NLR ≤1.84 and Fib > 2.345 g/L were the second, then patients with both NLR > 1.84 and Fib > 2.345 g/L were the worst.

However, there are also some shortages in the present study. It is a retrospective and single-institution study. A well-designed, prospective study with larger number of patients is needed. Furthermore, owing to the relatively small sample of patients, we didn’t divide the data into a training set and a test set for statistical validation.

In conclusion, our research verified that preoperative Fib could be a prognostic factor for predicting the prognosis of patients with HCC after liver transplantation, the combination of Fib and NLR enlarges the prognostic accuracy of testing. These findings may suggest us that when we make the treatment plan, we should also consider these prognosis-related serum biomarkers. Only in this way can we acquire better personalized treatment for HCC patients. In the future, the simple preoperative prognostic evaluation could be used to select patients for personalized therapy.

Written informed consent was provided to all patients prior to surgery. Study approval was granted by the independent ethics committees at the First Affiliated Hospital of Sun Yat-sen University. This study was conducted in accordance with the ethical standards of the World Medical Association Declaration of Helsinki.

A total of 130 consecutive patients with hepatocellular carcinoma who had undergone liver transplantation from January 2008 to May 2013 were enrolled in this study. The patients were selected on condition of completed preoperative clinical, laboratory, imaging, and follow-up data. There were no relative drugs and interventions used which may directly influence the peripheral hematological components. Traditional methods for assessment of tumor extent, namely, preoperative magnetic resonance imaging (MRI) and computerized tomography (CT) were employed. Macroscopic vascular invasion was defined by gross involvement of the lobar or segmental branches of the portal or hepatic veins. Microscopic vascular invasion was defined by the presence of tumor emboli within the central hepatic vein, the portal, or the large capsular vessels [37, 38].

All the operation were done in classic or modified piggyback fashion using well-described standard techniques [21]. All patients regularly received 20 mg basiliximab (Simulect, Novartis Pharma AG, Basel, Switzerland) during the operation and the fourth day after operation. FK506 and mycophenolate mofetil (MMF) were used to prevent rejection and maintain the immune suppression, the dose were determined by the reaction of patients. A routine concentration test of FK506 was carried out and immune suppressive drugs were adjusted based on the drug concentration and liver enzyme level, serum creatinine level and white blood cell count were also taken into consideration during the procedure. AFP and liver ultrasound were performed at each follow-up. Abdominal CT scan was performed every 6 months. Recurrence was defined as emergence of clinical, radiological, and/or pathological diagnosis of tumor as previously described. As for the patients with recurrence, the administration of sorafenib, TACE, RFA, tumor resection, and chemotherapy was selected due to specific conditions.