Aims and background. This study was designed to compare the efficacy and safety of paclitaxel/oxaliplatin/fluorouracil (TOF) regimen and S-1/oxaliplatin (SOX) regimen for metastatic gastric cancer (GC) patients.

Results. The ORR and DCR of TOF group was 43.3% and 60.0%, respectively while that of SOX group was 36.7% and 56.7%. There were no statistical differences between the ORRs (χ2 = 0.278) and the DCRs (χ2 = 0.069) of the 2 groups. The majority of adverse events of two groups were hematological and digestive ones. Most of them were grade I and II. The adverse event rate of TOF group was higher than SOX group. The PFS times of TOF and SOX groups were 6.5 and 5.8 months, respectively. There was no statistical difference between the PFSs of the 2 groups (P = 0.451).

Conclusions. The efficacies of TOF and SOX regimens are similar but the safety of SOX regimen better than TOF regimen.

Gastric cancer occupies the second place of deaths caused by malignances over the world and It is especially popular in Asia [1-3],which is the third common carcinoma in China [4]. and the incidence rate and death rate of gastric cancer in Jiangsu Province are especially higher than the national average [5].

Surgical resection is the preferred treatment for gastric cancer, but approximately two-thirds of patients have metastatic disease at the time of diagnosis [6]. Prognosis in these patients is adverse. Median survival time of them is 3 to 5 months without treatment [7] while 5-year survival rate is reported as 9.4% [8]..Local recurrence and distant metastasis occur in 60% of mGC patients even with a radical stomach surgery [9]

Chemotherapy is the most effective treatment option for patients with advanced gastric cancer who can’t be operated on [10-12].and the efficacy of postoperative chemotherapy has been acknowledged [13]. However, a worldwide consensus on standard chemotherapy regimens has yet to be established. The prognosis has gradually improved because of advances in chemotherapy regimens, but is not yet satisfactory.

Among various regimens, the combinations of paclitaxel/oxaliplatin/fluorouracil (TOF) regimen and S-1/oxaliplatin (SOX) regimen have become two important ones.

. As we all knew,the combination of Docetaxel /cisplation/ fluorouracil (DCF) had been verified by V325 trail to have higher RR, TTP, OS than FP4W [14]..

Oxaliplatin is the third generation of diaminocyclohexane platinum compounds with broad spectrum antitumor activity, which is better safety than cisplatin [13, 15].Paclitaxel is another Taxanes besides Docetaxel which can induce hyperstabilization of microtubules resulting in cell cycle arrest and apoptosis [16, 17]. The objective response rate of patients with gastric cancer to paclitaxel is 20%-25% [18].So We assumpt that the combination of paclitaxel/oxaliplatin/fluorouracil (TOF) regimen may substitute for DOF with lower toxicity.

S-1 is an oral anti-cancer drug of modified Fluorouracil composed of oteracil potassium, 5-chloro-2,4-dihydroxypy-ridine, tegafur [19],. which was also demonstrated to be not inferior to intravenous infusion of 5-FU when both were administered as a single drug [20, 21]. Combination of cisplatin with S-1(CS) is considered as standard first-line chemotherapy regimen for metastatic gastric cancer by SPIRIT trail in Japan [21, 22].

The applying of S-1 as adjuvant chemotherapy for mGC can improve the overall survival (OS) and relapse-free survival [23].

OS in mGC was proven to benefit from S-1 based chemotherapy rather than 5-FU-based chemotherapy in a metal-analysis [3, 24]. Combination of S-1 with oxaliplatin(SOX) was demonstrated not to inferior to S1 plus cisplatin(CS) in PFS. SOX regimen also had well tolerance in patients with mGC [25].From this ,SOX is thought as a new first-line treatment choice of mGC in Asia , especially in China and Japan [21].

But, What is the activity of combinations of paclitaxel/oxaliplatin/fluorouracil (TOF) regimen in mGC ?

This study was approved by the ethics committees of all participating medical institutions and conducted according to the principles of the Declaration of Helsinki and Good Clinical Practice Guidelines. Between Feb. 2012 and Jan. 2014, a total of 60 patients bearing mGC were enrolled. All patients gave their written informed consent before enrollment.

The exclusion criteria were 1) preexisted peripheral toxicity ≥ grade 2 of the National Cancer Institute Common Toxicity Criteria, 2) concurrent or prior malignancy, 3) central nervous system metastases, 4) concurrent treatment that interfered with the study evaluation, 5) active infection, 6) other uncontrolled underlying medical conditions that would impair the ability of the patients to receive the planned treatment, 7) having inadequate calorie and fluid intake, and 8) pregnant, and breastfeeding women or women of child-bearing potential without adequate contraception.

The outcomes of electrocardiogram, computed tomography (CT) scan, and levels of tumor markers (CA19-9, CA72-4, CA24-2 and carcinoembryonic antigen) were obtained from the patients within 7 d after enrollment. Hematology tests, biochemistry tests, and assessment of symptoms and signs were carried out for the patients within 3 days before enrollment and every week during the study period. CT scans were carried out and levels of tumor markers were measured before each cycle. According to the RECIST guideline [16], responses concluded complete response (CR), partial response (PR), stable disease (SD), and progressive disease (PD). To confirm the PR or CR, the levels of tumor markers were measured no less than 4 weeks after the objective response was obtained. Responses were assessed by the independent review committee. The overall response rate (ORR) was defined as the sum of CR and PR rates. The disease controlled rate (DCR) was defined as the sum of CR, PR and SD rates. Safety was evaluated according to the NCI-CTC. PFS is defined as the time from randomization until objective tumor progression or death.

The patient baseline characteristics are listed in Table 1. The difference between two groups was not statistically significant in any characteristics..

The patients all received 4-6 cycles of chemotherapy and were suitable for response evaluation.

No patients developed severe adverse events leading to exclusion of the efficacy analysis. 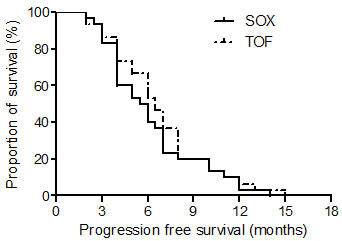 Chinese gastric cancer patients are oftern diagnosed at later stage with distant metastases [27] Although there are many treatment modality such as operation combined with chemotherapy which can be used to treat gastric cancer [28, 29], there is currently no standard regimen for mGC patients.Therefore, it is urgent to obtain a new therapeutic strategy with better efficacy and tolerable toxicity. In the present study, SOX regimen is usually considered to be the first-line therapy choice for mGC in China [30] and Japan [31] TOF regimen is not that widely applied. V325 trail has proven the ORR(36.7%), TTP(5.6m) of DCF regimen, docetaxel/cisplatin/ fluorouracil, higher than FP4w [14].It can be chose as first-line regimen for mGC but for high toxicity.

Following promising phase II study results [32], [33, 34], oxaliplatin was verified to have the non-inferiority compared with cisplatin with low toxicity. As we all know Paclitaxel is another taxane which has been used widely in mGC.

So We assumpted that TOF may substitute for DCF with tolerable side effect.

The efficacy and safety of TOF and SOX regimen were discovered in mGC. We found that the therapeutic efficacies of the 2 groups were similar but SOX regimen seemed to have lower toxicity than TOF regimen.

Our data on antitumor response basically meet with this range and we gained a slightly longer PFS.

There are few articles focusing on TOF in mGC, which is possible due to the consideration of the adverse events of this regimen. Actually our results do confirm this consideration.

We did not report the outcome of overall survival of the patients due to the 5-year follow-up has not been finished. And there is no statistical difference between Progression free survival times of the 2 groups. However, we can still find the tendency of longer survival time of TOF regimen. The survival outcome needs to be clarified by studies with larger sample sizes.

Several recent clinical trails have shown that SOX regimen is a effective and easily tolerated treatment method for mGC patients [12, 31, 36, 37].

The response rates of SOX for mGC range from 53.7% to 59.0% [12, 31, 37, 38]. Besides, Koizumi et al. [31] reported the median PFS time of patients receiving SOX regimen was 6.5 months and the incidence of grade 3/4 toxicity was lower. Similarly, Oh et al. [37] and Liu et al. [30] also showed that the SOX regimen was easily tolerated and more convenient treatment as a first-line therapy for mGC patients. All these results met ours.

Conclusively, we demonstrated that the therapeutic efficacies of TOF regimen and SOX regimen are similar but the safety of SOX regimen is more tolerable than TOF regimen. Hence, we would rather recommend SOX regimen for mGC patients not only because of the acceptable benefits to the efficacy and PFS but more importantly the better safety. Further studies are guaranteed to corroborate the result of this study.