The cytokine midkine, a heparin-binding growth factor, was first discovered as a molecule involved in embryonic development [4]. Previous studies have revealed that upregulation of midkine promoted tumor growth, survival, invasion and angiogenesis [5–7]. Moreover, midkine may also stimulate inflammatory responses [8], since it has been demonstrated to induce the migration of inflammatory cells [9–11] and suppresses the expansion of regulatory T cell (Treg) by blocking the development of tolerogenic dendritic cells (DCs) [12]. Recently, there is increasing evidence that midkine is implicated in autoimmune and inflammatory diseases, such as rheumatoid arthritis (RA) [13–15], multiple sclerosis (MS) [12, 16–18] and inflammatory bowel disease (IBD) [19, 20]. The serum midkine level could serve as a marker of disease activity in RA and an indicator of a poor prognosis [15]. Removal of midkine suppressed the animal model of MS, experimental autoimmune encephalomyelitis (EAE) due to expansion of the Treg cell population and decrease in the number of autoreactive Th1 and Th17 cells [16, 18]. In RA patients, serum midkine levels were positively correlated with IL-17 [21]. All these findings suggest that midkine may be implicated in the pathogenesis of autoimmune diseases. However, up to now, the role of midkine in SLE is largely unknown.

The general features of study subjects

The general features of study subjects were summarized in Table 1. There was no significant difference in age and gender distribution between SLE patients and HCs (both P > 0.05). The average disease duration of SLE patients was 3.92(0.00, 8.83) years, the mean SLEDAI-2K was 16.64 ± 8.48.

Normally distributed data were expressed as means ± standard deviation (SD), whereas variables with a skewed distribution were presented as median (interquartile range).

Categorical variables values are the number (%).

Comparison of plasma midkine and pleiotrophin levels between SLE patients and HCs, and different subgroups of SLE patients

Table 2: Comparison of plasma midkine and pleiotrophin levels between SLE patients and healthy controls, and different subgroups of SLE patients

Correlations of plasma midkine and pleiotrophin levels with IL-17 level

Evaluation on diagnostic performance of midkine and pleiotrophin as SLE biomarkers 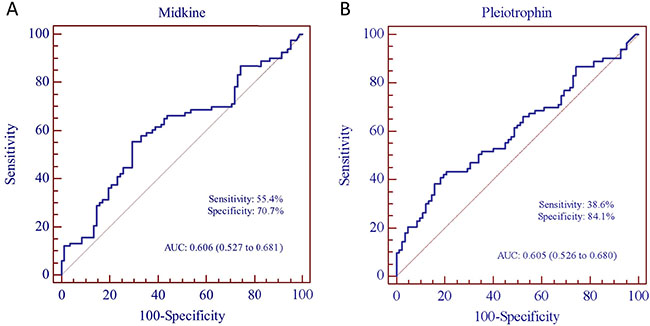 Figure 3: Receiver operating characteristic (ROC) curve analysis of midkine and pleiotrophin for the discriminative ability of SLE patients versus healthy controls. (A) midkine, (B) pleiotrophin.

In recent years, there is growing evidence that midkine are implicated in autoimmune diseases. In RA patients, midkine levels in serum or synovial fluid were elevated [13, 15], and its levels were positively correlated with IL-17 and C-reactive protein (CRP), but not with Disease Activity Score (DAS), rheumatoid factor, erythrocyte sedimentation rate (ESR), anti-keratin antibodies and anti-cyclic citrullinated peptide antibodies [21]. In antibody-induced arthritis, mice deficient in midkine gene (Mdk(−/−) mice) rarely developed the disease, while most of the wild-type mice did. Administration of midkine to Mdk(−/−) mice increased the disease risk, migration of inflammatory leukocytes to the synovial membranes in the disease model was inhibited in Mdk(−/−) mice. Moreover, midkine was found to promote the differentiation of osteoclasts from macrophages [13]. A chimeric-type siRNA for midkine suppressed the development of antibody-induced arthritis and adhesion of the omentum to the injured abdominal wall [14]. More recently, Shindo et al. reported that elevated serum midkine level was associated with higher DAS28-ESR, disability index of the Health Assessment Questionnaire, and rheumatoid factor level. Anti-TNF therapy significantly downregulated the serum midkine level. Midkine was expressed by synovial lining cells in RA synovial tissues and it upregulated the production of IL-6, IL-8, and CCL2 by rheumatoid synovial fibroblasts [15]. Therefore, midkine may be implicated in the pathogenesis of RA via induction of inflammatory mediators. Takeuchi et al. showed that removal of midkine suppressed EAE due to the expansion of the Treg cell population and decrease in the numbers of autoreactive Th1 and Th17 cells. Midkine decreased Treg cell population by inhibiting the STAT5 phosphorylation, which is essential for the Foxp3 expression. Furthermore, midkine reduced DCreg cell population through suppressing the STAT3 phosphorylation, which is crucial for DCreg development. Blockade of midkine signaling with a specific RNA aptamer significantly elevated the population of DCreg and Treg cells and ameliorated EAE without detectable adverse effects [16, 18]. Inflammatory bowel diseases (IBDs), including ulcerative colitis (UC) and Crohn’s disease (CD), are systemic, chronic inflammatory diseases. In CD, serum midkine levels was positively associated with Crohn’s Disease Activity Index, and midkine was found to be a sensitive biomarker of diagnostic value comparable with the gold standard CRP in this disease [20]. In an experimental colitis model, a well-established model for UC, midkine was abundantly expressed in fibroblasts of the mucosal and submucosal layers of the rat distal colon [25]. In UC, midkine was higher in inactive and active UC compared with controls, and positively associated with disease activity. Midkine also corresponded with clinical, endoscopic, inflammatory and angiogenic activity, and anemia. Performance of midkine as a marker of UC or active UC was comparable to that of CRP [19]. Collectively, these evidence suggest that midkine may play a key role in the pathogenesis of autoimmune diseases including SLE, inhibiting midkine therefore might be useful for attenuating inflammation-related symptoms in these diseases.

Despite increasing evidence of the involvement of midkine in the pathogenesis of autoimmune diseases, the data on pleiotrophin in these diseases are very limited. An earlier study showed that the basal expression of pleiotrophin mRNAs in normal spinal cords was significantly upregulated after induction of EAE, and its expression reached peak levels threefold above basal levels during the clinical recovery period, suggesting its role in the disease progression [26]. Using MRL-lpr/lpr mice, a mouse model for SLE, Asari et al. showed that that oral administration of high molecular weight hyaluronan (HA900) inhibited Th1-type autoimmune disease and inflammation by up-regulating SOCS3 expression and down-regulating pleiotrophin expression [27]. In human SLE, pleiotrophin gene single-nucleotide polymorphism (SNP) [rs919581] was confirmed to be associated with susceptibility to SLE [28]. All the available evidence indicate that pleiotrophin may also be involved in SLE.

Several limitations in this study should be acknowledged. First, this study is limited by a small sample size that presented to two tertiary Hospitals, which may restrict the generalizability of our results. Second, this is a cross-sectional study, the exact mechanism of these two cytokines in the development and pathogenesis of SLE was not explored, which also makes determining a causal relationship between midkine and SLE challenging. Therefore, further studies are still required to determine the exact role of midkine in SLE pathogenesis.

Taken together, elevated plasma midkine and pleiotrophin levels and their associations with rash, anti- SSA and IL-17 in SLE patients suggest their important role in this disease.

83 SLE patients and 123 controls including 20 RA patients, 21 SS patients and 82 community based HCs were recruited. SLE diagnosis was made by the presence of four or more 1997 revised American College of Rheumatology (ACR) classification criteria. Renal involvement of SLE patients was determined according to the ACR criteria, i e, any one of the following: 1) persistent proteinuria ≥ 0.5 g/day; 2) the presence of active cellular casts; or 3) biopsy evidence of lupus nephritis. The disease severity was quantified according to the Systemic Lupus Erythematosus Disease Activity Index 2000 (SLEDAI-2K) [29]. Disease activity was quantified using the SLEDAI-2K score. More active SLE was defined as a SLEDAI-2K score > 10, those patients with SLEDAI-2K ≤ 10 were classed as relatively inactive [30, 31]. The patients with RA were diagnosed according to the ACR/European League Against Rheumatism 2010 classification criteria [32]. The patients with SS were diagnosed in accordance with the revised 2002 American-European criteria [33]. Exclusion criteria of all patients were as follows: (i) patients with malignant tumors; (ii) patients with serious acute infection within six weeks before admission; (iii) patients complicated with other autoimmune disease; and (iv) patients suspected of drug or alcohol abuse. Demographic and clinical data were collected from hospital records or by questionnaire. The study was approved by the Medical Ethics Committee of Anhui Medical University. Methods were carried out in accordance with the approved guidelines. All subjects were enrolled after informed consent had been obtained.

Plasma were obtained from 5 ml of whole blood of all study subjects and stored at −80°C until use. Plasma midkine, pleiotrophin and IL-17 levels were detected by specific ELISA kits according to the manufacturer’s recommendation (R&D Systems, Inc.), the results were expressed as picograms per milliliter.

Numerical data were expressed as mean ± SD, or median (interquartile range, IQR) if they were not in normal distribution. Difference of continuous variables in different groups was compared with t test or Mann–Whitney rank sum test. The Chi-square test was used to assess differences in categorical data between two groups. Spearman’s rank correlation coefficient was used for the correlation analysis. Receiver operating characteristic (ROC) curves were constructed and the area under curve (AUC) was used to assess specificity and sensitivity of predictive power or feasibility of using plasma midkine and pleiotrophin as biomarkers for SLE. All statistical analysis was conducted using the Statistical Package for the Social Sciences (SPSS) statistical software for Windows, Version 10.01 (SPSS Inc, IL, USA). The ROC curve analyses were performed with MedCalc version 11.4.2.0 (Mariakerke, Belgium). P < 0.05 was considered as statistically significant.