Fibronectin is a component of the extracellular matrix that links collagen fibers to integrins on the cell’s surface. The splicing isoforms, containing the ED-B domain, are not expressed in adult tissues but only in tumor stroma or during embryonic development. Fibroblasts and endothelial cells express ED-B fibronectin during angiogenesis. Also cancer cells can synthetize ED-B fibronectin, but its function in tumor growth needs to be further elucidated.

Epithelial to mesenchymal transition is a key step for tumor progression contributing to the metastatic spread. Therefore, circulating cancer cells could seed into the metastatic niche taking advantage from the ED-B fibronectin that secrete their own.

Fibronectin is an essential component of the extracellular matrix that is necessary for the cellular adhesion to the stroma. Indeed, it creates a bridge between the molecules of the cell surface (integrins) and the collagen fibers [1]. Fibronectin, through the binding with integrins, activates intracellular pathways leading to cell adhesion, growth and differentiation [2]. Moreover, fibronectin can induce cytoskeleton modifications, allowing cell migration, since integrins are anchored to the actin fibers through the molecules talin and vinculin [2]. Therefore, fibronectin is necessary for embryogenesis and wound healing. Fibronectin is a glycoprotein that contains 12 fibronectin type-I repeats, 2 fibronectin type-II repeats, 17 fibronectin type-III repeats and a non-homologous variable connecting segment: the IIICS. Two of the type III repeats can be alternatively spliced (ED-A and ED-B) [1]. There are at least 20 known different isoforms originating from a single pre-mRNA. The function of these isoforms remains obscure in most cases. ED-A and ED-B sequences are highly conserved among vertebrates [3] and these isoforms are abundantly expressed during embryogenesis supporting their role in vascular development, cell migration, and differentiation [4, 5]. In adults, ED-A and ED-B fibronectin expression is induced in specific conditions such as tissue repair, fibrosis, angiogenesis, and cell migration [4, 6]. Indeed, ED-B fibronectin has a restricted pattern of expression: it is almost undetectable in normal adult tissues and in mature blood vessels, but is abundant in regenerating tissues and around newly formed blood vessels [7, 8]. Mice lacking ED-A or ED-B domain grow-up without obvious defects [9]. Whereas, the simultaneous knock-out of both ED-A and ED-B exons determines embryonic lethality, with an incomplete penetrance, for the presence of multiple cardiovascular defects [9].

For their role in tissue remodeling, angiogenesis and migration, ED-A and ED-B isoforms could play a relevant role in cancer growth. Indeed, during the formation of metastasis, cancer cells have to seed in the metastatic niche through the binding of their membrane integrins with the fibronectin present in the extracellular matrix [10].

However, the exact role of ED-A and ED-B fibronectin in cancer remains largely obscure. ED-B fibronectin is expressed in tumor tissue [11], in particular in breast carcinoma [12], brain tumors [13], lymphoma [14] and prostate cancer [15]. High ED-B fibronectin expression was found around newly formed blood vessels and therefore could be a candidate target to treat tumor angiogenesis.

EMT was induced, using TGF-β, in two cell lines of prostate cancer: PC3 and Du145. After 2 weeks of TGF-β treatment, cells with an epithelial-like morphology acquired a more elongated shape resembling that of fibroblast in culture: a typical characteristic of mesenchymal-cells (Figure 1).

Figure 1: Morphology of Du145 cells treated with or without TGF-β. After 2 weeks of treatment cells showed an elongated mesenchymal-like appearance. Pictures were taken by phase contrast microscopy. 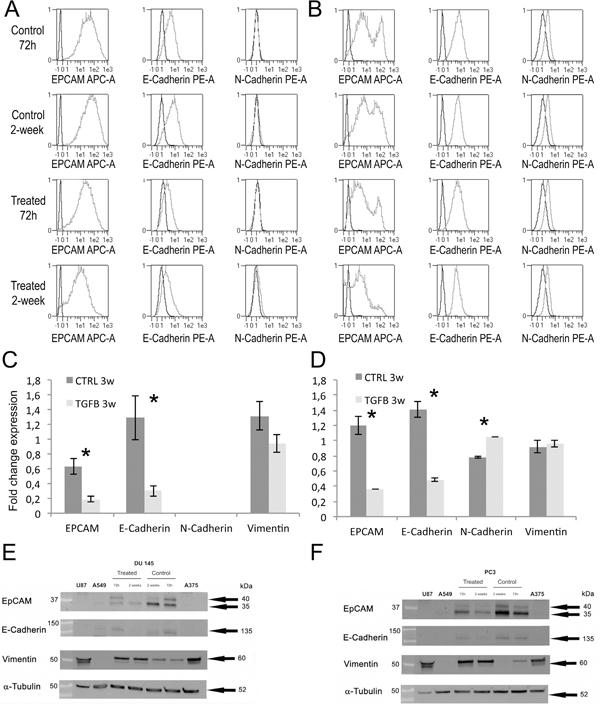 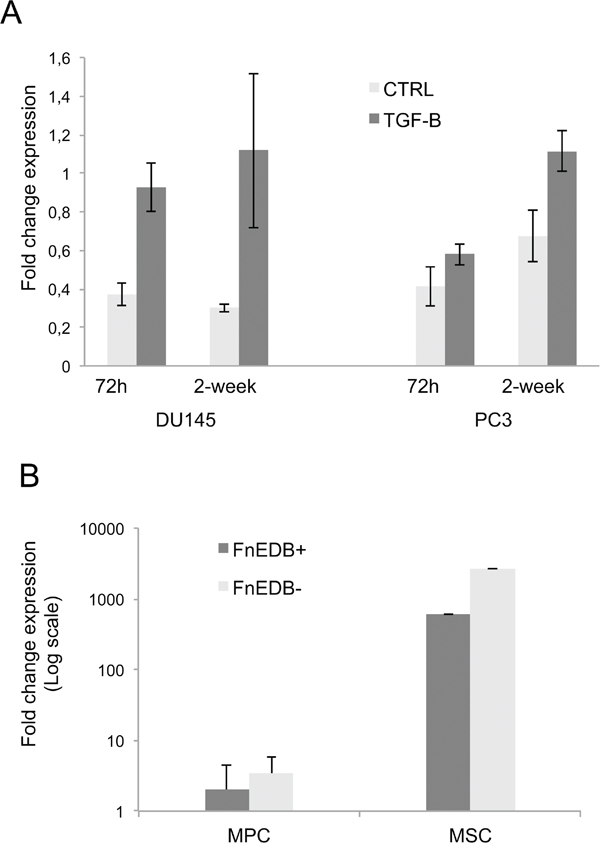 The ED-B fibronectin expression in DU145 was much lower than in MSCs and MPCs (Figure 3B). Even if the EMT was induced, the transformed PC3 and Du145 did not show a prototypical mesenchymal phenotype such as MSC (EPCAMnegCD105+CD90+STRO-1+) or MPC (EPCAMnegCD105negCD90negCD31+).

Interestingly, we observed the expression of ED-B fibronectin in prostate cancer cells. Fibronectin is a mesenchymal marker and increases in TGF-β–induced EMT [20, 23]. ED-B fibronectin was up regulated during EMT in Du145 and PC3 cells upon TGF-β induction. This is relevant for cancer cells’ migration and for their metastatic progression. Indeed, tumor cells can synthetize the fibronectin isoforms expressed during tissue remodelling and neo angiogenesis and could become independent from the expression of fibroblasts and mesenchymal cells. These two sources of ED-B fibronectin can contribute to create a permissive soil for the invasion, attachment and growth of metastases.

Physiologically, ED-B fibronectin is synthesized, secreted, and deposited into the extracellular matrix by numerous cell types such as endothelial cells of newly formed blood vessels and myofibroblasts [14, 24, 25]. Cells transformed in vitro using SV40 start to express ED-B fibronectin [26]. Moreover, fibronectin and ED-B mRNA transcripts are expressed in cancer cell lines including colorectal and breast carcinoma, among others [24]. The protein can not be described on the surface of these cells in vitro, probably because it is rapidly secreted. Indeed, ED-B fibronectin, secreted by cancer cells, accumulates abundantly into mouse xenograft according to the BC1 antibody, which is specific for human but not mouse fibronectin [24]. The FDC6 antibody recognizes an O-glycosylated epitope on a threonine, inside the IIICS domain, of a fibronectin isoform expressed in cancer or in fetal cells/tissues, but not in normal adult cells/tissues [27]. Lima et al. have observed the up-regulation of this fibronectin isoform during EMT in prostate and lung adenocarcinoma cell lines [27, 28]. Moreover, authors demonstrated that this O-glycosylated fibronectin isoform promotes the EMT processes [27].

MPC can be isolated from bone marrow upon appropriate conditions [31] and thereafter differentiated into blood vessels, bone, cartilage and MSC [32]. Indeed, MSC are cells already committed through differentiation compared to MPC. Interestingly, MSC expressed a much higher degree of ED-B fibronectin that MPC. Therefore, we believe that ED-B fibronectin is a marker of EMT and possibly an interesting target for therapy in more advanced tumors.

4. Chauhan AK, Iaconcig A, Baralle FE, Muro AF. Alternative splicing of fibronectin: a mouse model demonstrates the identity of in vitro and in vivo systems and the processing autonomy of regulated exons in adult mice. Gene. 2004; 324:55-63.