p16 is the principal member of the INK4 family of cyclin-dependent kinase (CDK) inhibitors [6]. As a regulatory protein of the cell cycle, p16 is involved in G1-to-S phase transition. Upon binding to CDK4/6, p16 inhibits the cyclin D1-CDK4/6 complex formation and CDK4/6-mediated phosphorylation of the retinoblastoma (RB) protein. Once RB is phosphorylated, the E2F-RB complex dissociates, leading to reduced growth-suppressor activity of RB [7]. Like RB protein, p16 is a tumor suppressor. p16 maintains RB protein family members in a hypophosphorylated state [7–10]. However, it is difficult to explain many aspects of p16 function and regulation by its well-known function as a tumor suppressor alone. In addition, the molecular pathways responsible for p16 function and expression have not yet been elucidated.

p16 expression has been analyzed in some studies of gynecological malignancy. According to the 2014 World Health Organization (WHO) Classification, more than half of ovarian high-grade serous carcinomas show diffuse, strong p16 expression [11]. The majority of endometrial serous carcinoma (SC) also strongly expresses p16 protein. p16 and p53 expression levels are used as differential immunostaining markers to distinguish high-grade serous carcinoma from other histological types of ovarian carcinoma and SC from other histological types of endometrial carcinoma. In addition, p16 overexpression occurs in human papillomavirus (HPV)-related tumors [6, 11]. p16 overexpression indicates high-risk HPV infection, not only in uterine cervical squamous cell carcinoma and usual-type endocervical adenocarcinoma, but also in endocervical adenocarcinoma in situ and high-grade squamous intraepithelial lesions of the vulva, vagina, and anogenital regions. Therefore, p16 is used as a diagnostic biomarker for HPV-related precancerous lesions and invasive carcinoma [6, 12].

This preliminary study was conducted with 124 patients who underwent curettage, polypectomy, or hysterectomy for benign, precancerous, or malignant lesions of the endometrium from March 2015 to May 2016. Classification of all 124 cases according to the degree of malignancy of endometrial lesions resulted in 62 benign lesions, 26 precancerous lesions, and 36 malignant lesions. The age of the patients ranged from 25 to 74 years (median, 46 years) in patients with benign lesions, from 27 to 67 years (median, 51 years) in patients with precancerous lesions, and from 41 to 84 years (median, 59 years) in patients with malignant lesions. According to histological type, the 62 benign lesions consisted of nonpathological endometrium (10 cases), atrophic endometrium (13 cases), adenomyosis (8 cases), endometrial polyp (17 cases), and hyperplasia without atypia (14 cases). The 26 precancerous lesions consisted of atypical hyperplasia/endometrial intraepithelial neoplasia (AH/EIN; 21 cases) and serous endometrial intraepithelial carcinoma (SEIC; 5 cases). The 36 malignant lesions consisted of endometrioid carcinoma (EC; 21 cases), SC (8 cases), and carcinosarcoma (7 cases).

Representative photomicrographs of stromal p16 expression in precancerous endometrial lesions are presented in Figure 2. Of the 26 cases of precancerous endometrial lesions, 18 (69.2%) showed p16 immunostaining scores of ≥ 3. Six (28.6%) and two (9.5%) cases of AH/EIN had scores of 4 and 6, respectively. While the scores of AH/EIN varied from 0 to 6, those of SEIC were ≥ 4. Four (80.0%) of the 5 SEIC cases showed scores of ≥ 6. In contrast with the benign lesions, there was a significant difference in stromal p16 expression status between AH/EIN and SEIC (P = 0.001); stromal p16 expression was significantly higher in SEIC than in AH/EIN. All cases of SEIC exhibited strong p16 staining intensity in almost all of the tumor cells, whereas none of the AH/EIN cells showed diffuse expression. Fifteen (71.4%) of the 21 AH/EIN cases exhibited patchy, weak to moderate cytoplasmic p16 immunoreactivity in the tumor cells. 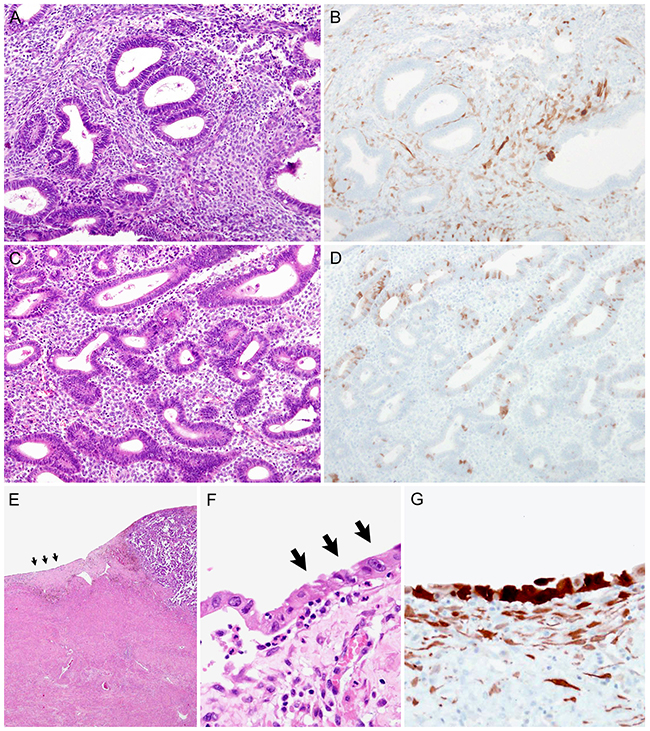 Representative photomicrographs of stromal p16 expression in malignant endometrial lesions are presented in Figure 3 (EC and SC) and Figure 4 (carcinosarcoma). Of the 36 cases of malignant endometrial lesions, 29 cases (80.6%) showed p16 immunostaining scores of ≥ 4. All of the remaining 7 cases with scores of ≤ 3 were EC; none of the cases of SC or carcinosarcoma displayed scores of ≤ 3. Moreover, 7 (87.5%) of the 8 SC cases and 6 (85.7%) of the 7 carcinosarcoma cases showed scores of ≥ 6. In contrast, in EC, 10 (47.6%) of the 21 cases had scores of ≥ 6. Stromal p16 expression levels were significantly higher in SC than in EC (P = 0.021), whereas the difference between carcinosarcoma and SC was not statistically significant (P = 0.483). 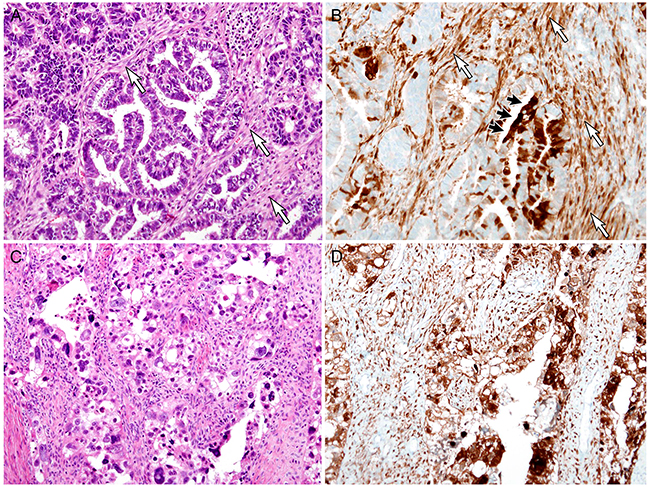 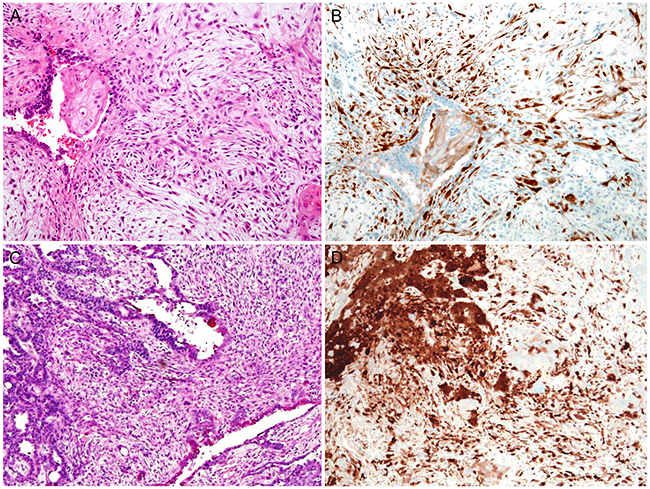 A novel finding reported in this preliminary study is the gradual and significant increase in stromal p16 expression with increased degree of malignancy in benign, precancerous, and malignant endometrial lesions. We observed that more than 90% (59/62) of the benign lesions had p16 immunostaining scores of < 3, whereas the precancerous lesions showed scores of 3 to 6 in approximately 60% (16/26) of the cases examined. Moreover, more than half (23/36) of malignant lesions displayed scores of 6 or more. Consistent with this finding, a comparison of p16 expression within tumors of each histological type also revealed significant differences. In endometrioid neoplasms, the differences in stromal p16 expression between precancerous and benign lesions (P < 0.001) and between malignant and precancerous lesions (P = 0.012) were statistically significant. Also in serous neoplasms, stromal p16 expression was significantly higher in malignant and precancerous lesions than in benign lesions (P < 0.001). In addition, stromal p16 expression was found to have 100% sensitivity and 100% specificity when the cutoff value is p16 immunostaining score 4 (Table 5). These findings are consistent with those of our previous study demonstrating stromal p16 overexpression in ovarian carcinoma [21]. Compared with benign and borderline ovarian neoplasms, ovarian carcinomas had significantly elevated p16 expression levels in the peritumoral stroma. These significances remained when the analysis was performed based on lesion classification as serous, mucinous, and endometriosis-associated neoplasms. Our observation of significantly higher levels of stromal p16 expression in malignant endometrial lesions suggests that p16 may be involved in tumor cell growth and invasion in the tumor microenvironment through its overexpression in stromal cells. Some previous studies have reported p16 overexpression at the invasive tumor front of endometrial carcinoma, colorectal carcinoma, and basal cell carcinoma [22–25]. These results suggest that p16 may be involved in tumor invasion and progression and support the hypothesis that the p16 protein promotes invasiveness through interactions with other molecules related with tumor cell migration and invasion [6, 22–24, 26]. To confirm our preliminary results, it will be necessary to analyze stromal p16 expression using a larger number of endometrial carcinoma samples.

Another study on p16 expression in the stroma of ductal carcinoma in situ (DCIS) of the breast [29] provided evidence that DCIS with high stromal p16 expression tended to show estrogen receptor negativity and high Ki-67 labeling indices. In addition, it was reported that high stromal p16 expression was a strong independent predictor of DCIS recurrence with a higher hazard ratio than the established prognostic markers. These findings are in agreement with our data. p16 is an inhibitor of cell growth in response to various stress stimuli, such as DNA damage, oxidative stress, or hyperproliferative signals. Therefore, p16 protein induces cellular senescence, such that stromal p16 overexpression is indicative of stromal cell senescence. On the basis of the results of previous studies, [28, 30, 31], we postulated that senescent stroma can contribute to disease progression by secreting inflammatory mediators, cytokines, and enzymes such as proteases, providing a mechanism through which p16-positive stroma contributes to tumor progression and/or invasion.

Between March 2015 and May 2016, 124 cases of endometrial lesions were retrieved from the surgical pathology files of Severance Hospital. The pathological diagnoses are summarized in Table 1. The endometrial lesions were classified as benign, precancerous, and malignant in 62, 26, and 36 cases, respectively. Of the 62 cases of benign lesions, 15 (24.2%), 10 (16.1%), 2 (3.2%), and 35 (56.5%) cases were diagnosed during dilatation and curettage (D&C), hysteroscopic resection, total abdominal hysterectomy (TAH), and total laparoscopic hysterectomy (TLH), respectively. Of the 26 cases of precancerous lesions, 7 (26.9%), 2 (7.7%), 2 (7.7%), 4 (15.4%), and 11 (42.3%) cases were diagnosed during D&C, hysteroscopic resection, robot-assisted total hysterectomy, TAH, and TLH, respectively. Of the 36 cases of malignant lesions, 2 (5.6%), 2 (5.6%), 12 (33.3), and 20 (55.6%) cases were diagnosed during radical abdominal hysterectomy, radical laparoscopic hysterectomy, TAH, and TLH, respectively. This study did not include any cases where the histological differential diagnosis between benign and precancerous lesions was ambiguous. None of the patients received preoperative neoadjuvant chemotherapy, radiation therapy, or concurrent chemoradiation therapy. Pathological diagnoses were classified following the criteria of the WHO Classification of Tumours of Female Reproductive Organs, revised in 2014 [11]. In particular, in the revised 2014 WHO Classification, endometrial hyperplasia was classified into hyperplasia without atypia and AH/EIN on the basis of the presence of cytological atypia. This study was reviewed and approved by the Institutional Review Board at the Severance Hospital, Yonsei University Health System, Seoul, Republic of Korea (2016-1371-001).

The curetted or resected specimens were fixed in 10% neutral-buffered formalin and embedded in paraffin blocks. From each formalin-fixed, paraffin-embedded block, 4-μm sections were cut and stained with hematoxylin and eosin. Two independent pathologists examined all available hematoxylin and eosin-stained slides by routine light microscopy and chose the most representative slide to perform immunohistochemical staining.

The percentage of p16-positive stromal cells and the staining intensity were assessed. The cut-off index was defined as the presence of 10% or more cells displaying nuclear p16 immunoreactivity, as described previously [21, 28, 32]. The estimated percentages were categorized as follows: less than 10% (score 0), 10% to 24% (score 1), 25% to 50% (score 2), or 50% or more (score 3). The staining intensity was graded as follows: negative (score 0), weak (score 1), moderate (score 2), or strong (score 3). The subcellular location of p16-positive signals (nuclear or cytoplasmic) was also estimated. The final score was calculated as the product of the percentage and staining intensity, resulting in scores of 0, 1, 2, 3, 4, 6, and 9 [33].

This study was supported by Basic Science Research Program through the National Research Foundation of Korea (NRF) funded by the Ministry of Education (2016R1D1A1B03935584) and by a faculty research grant of Yonsei University College of Medicine for 2016 (6-2016-0130).