Intensity-modulated radiotherapy (IMRT) has replaced the conventional radiotherapy (2D-RT) and improved clinical efficacy in Nasopharyngeal Carcinoma (NPC) patients. In the present study, we retrospectively analyzed the clinical characteristics of patients with NPC treated with IMRT to assess the long-term survival outcomes and failure patterns. Of the 527 patients, One hundred and twenty-one patients experienced treatment failure, 86 patients developed distant metastases, and 12 patients developed a second primary tumor. The local and regional recurrence rates were 31.4% and 14.0%, respectively. The 5-year overall survival (OS), progression-free survival (PFS), local recurrence-free survival (LRFS), regional relapse-free survival (RRFS), and distant metastatic relapse-free survival (DMFS) rates were 80.9%, 75.6%, 91.7%, 96.2%, and 83.0%, respectively. The 5-year LRFS rates of Stage T1-4 patients were 100.0%, 93.1%, 92.0%, and 85.8%, respectively. The 5-year DMFS rates of Stage N0-3 patients were 95.0%, 86.1%, 79.5%, and 67.2%, respectively. Multivariate analysis showed age and T-stage were independent predictors of OS, T-stage was an independent predictor of LRFS, and age and N-stage were independent predictors of PFS and DMFS.

In summary, the improved treatment results with IMRT are primarily due to the achievement of a higher local tumor control rate and OS in NPC patients. However, distant metastasis was the most commonly observed failure pattern after treatment. These results provide deep insights about the value of IMRT in the treatment and prognosis of NPC patients.

NPC is the most common malignant head and neck tumor in Asian patients, particularly in southern China. Considering the high sensitivity of radiotherapy, IMRT has exhibited improved clinical efficacy in NPC patients, and has hence widely replaced the conventional radiotherapy, including two-dimensional radiation therapy technology and three-dimensional conformal radiotherapy technology. From 1996 to 2000, the 5-year OS of 2,687 patients who underwent conventional two-dimensional radiotherapy was 75% [1]. Moreover, the 5-year disease-specific survival rate (2005–2010) of 444 patients treated with IMRT was approximately 85% [2]. Thus, IMRT has become the standard technology for the treatment of NPC for improving local control and protecting the surrounding normal tissue. However, to our knowledge, studies with a large sample, long-term follow-up, and various disease stages among patients with NPC are rare. In the present study, we retrospectively analyzed the clinical characteristics of patients with biopsy-proven, non-metastatic NPC treated with IMRT from January 2007 to December 2011 in our hospital to assess the long-term survival outcomes and failure patterns. 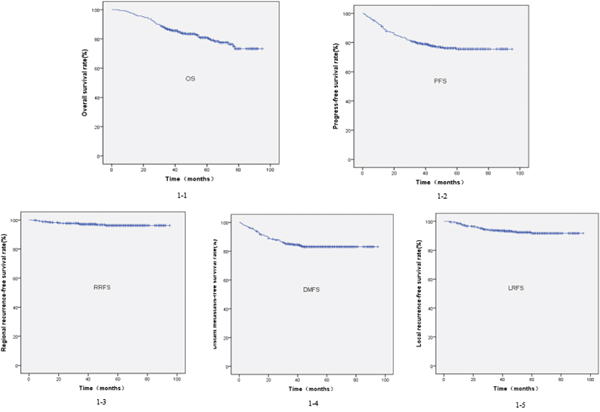 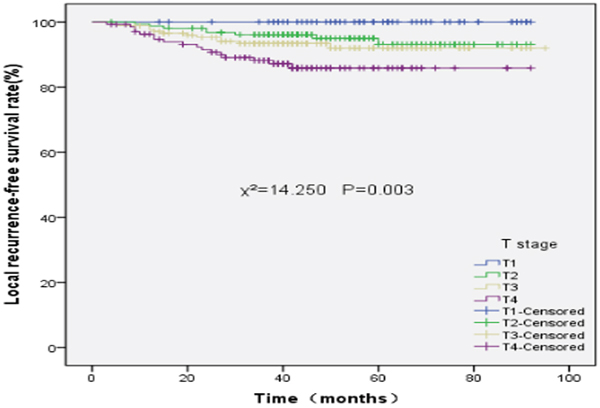 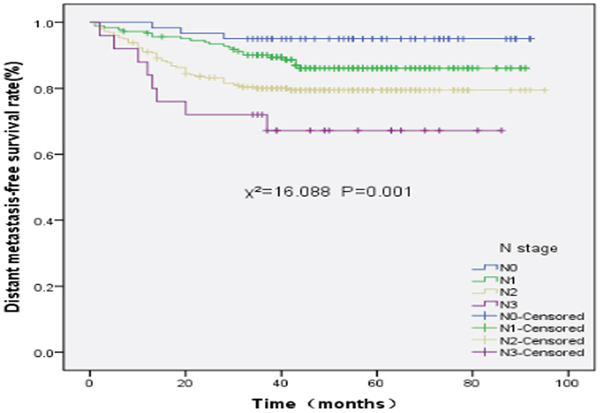 Table 3: Comparison of tumor invasion in adjacent regions between pNPC and rNPC

Table 4: Comparison of tumor invasion in lymph nodes between pNPC and rNPC

Since it was first clinically introduced in 1990, IMRT has become the first-choice treatment option for the treatment of NPC. In a recent study, Sun et al retrospectively analyzed 868 patients with NPC treated with IMRT, wherein approximately 69.4% patients had phase III-IVa disease, and found that the 5-year Disease Specific Survival (DSS), LRFS, RRFS, DMFS, and PFS rates were 84.7%, 91.8%, 96.4%, 91.8%, and 77.0%, respectively [3]. In the present study, the proportion of patients with phase III-IVa-b disease was approximately 75.5%, and the 5-year OS, LRFS, RRFS, DMFS, and PFS rates were 80.9%, 91.7%, 96.2%, 91.7%, and 75.6%, respectively. Compared with the results of a study on non-IMRT treatment options in our hospital [4], which are similar to those of studies in other research centers [2, 5, 6], the present study indicated that IMRT significantly improved the patient's OS, LRFS, and PFS. Moreover, our study indicated that distant metastasis was the most common cause of treatment failure in patients with NPC, followed by local recurrence and regional lymph node recurrence. Although previous studies on IMRT have reported similar results [33, 7, 8], studies on conventional radiotherapy of NPC have indicated that local recurrence is the main reason for treatment failure [1, 5, 6]. Moreover, we observed that 12 patients with NPC developed SPTs after treatment. In addition, in studies on conventional radiotherapy, the incidence of SPTs was approximately 2.0–5.2% [9–12]. Hence, the incidence of SPTs induced by IMRT and conventional radiotherapy is similar. However, as the follow-up duration of the preset study was relatively short and the incidence of SPTs would increase with an increase in the follow-up duration, physicians should carefully consider the development of SPTs after treatment with IMRT.

The present study indicated that the nasopharynx (78.4%) and skull base (57.8%) are the most common sites of recurrence, followed by the parapharyngeal space, intracranial region, paranasal sinus, nasal cavity, chewing muscles, region below the temporal fossa, orbit, and oropharynx, with rates <10%. This result is similar to that of the study of Li [17] and Ng [18] who showed that the recurrence rates in the nasopharynx and skull base of NPC patients after IMRT were approximately 78.1% and 59.4%, respectively. There are several potential reasons why the recurrent tumors in the nasopharyngeal space, including nasopharyngeal carcinoma stem cells, are not sensitive to radiation and chemotherapy, such as inadequate exposure dose, repopulation of resting stage cells, inaccuracy of target delineation, and unsuitability of radiation treatment plan design; however, further research is needed to obtain a final confirmation. However, for the patients treated with conventional radiotherapy, the most sites of recurrenc is skull base anis the most common site of recurrence in NPC patients treated with conventional radiotherapy [18]; this is reportedly associated with the low dose applied to this region, as a result of the dose limitation to the important organs around the skull base and the dose attenuation in bone [19]. The present study indicated that the skull base the second most common site of recurrence in NPC patients treated with IMRT.

In summary, our study finally describes the improved treatment results with IMRT over two dimensional-radiotherapy (2D-RT) are primarily due to the achievement of a higher local tumor control rate and OS rate in NPC patients. Moreover, Although more work is needed to fully elucidate the long-term side-effect, we have determined that distant metastasis is the most commonly observed failure pattern after treatment. These results provide deep insights about the value of IMRT in the treatment and prognosis of NPC patients.

We enrolled 527 patients with NPC who were treated at the Cancer Hospital of Guangxi Medical University from January 2007 to December 2011, and met the following criteria: histologically confirmed NPC on nasopharyngeal biopsy; no evidence of metastasis; no previous malignancy or other concomitant malignant disease; no previous treatment for NPC; Karnofsky performance status of ≥70; and completion of radical radiotherapy, without any metastasis during the treatment.

The initial work-up included a complete physical examination, computed tomography (CT) or magnetic resonance imaging (MRI) of the head and neck, histological confirmation of nasopharyngeal lesions, chest radiography or CT, abdominal ultrasonography or CT and single photon emission computed tomography (SPECT) of bone, all of which were used for the exclusion of distant metastases.

The patients included 394 men and 133 women (ratio, 2.9:1), with a median age of 44 years (range, 16–79 years). Patients were staged according to the 2010 Union for International Cancer Control (UICC) staging system. Pathology classification was based on the World Health Organization (WHO) guidelines, with Grade I representing squamous cell carcinoma, Grade II representing non-keratinizing carcinoma, and Grade III representing undifferentiated carcinoma. The baseline data and characteristics of the patients are listed in Table 6.

Table 6: Characteristics and treatment factors for the entire series of 527 patients

All patients were immobilized in the supine position with an individually manufactured precision mask, from the head to the shoulders. Contrast-enhanced CT images were obtained using a CT simulator. After delineation of the target was completed, data were imported into the treatment planning system for treatment design. The prescribed radiation dose to the planning target volume (PTV) including the primary nasopharyngeal gross tumor volume (GTVnx) and involved cervical lymph nodes (GTVnd) was 69.96–74.09 Gy, to the PTV including the high-risk regions (CTV1) was 60–65.1 Gy, and to the PTV including the low-risk regions and neck nodal regions (CTV2) was 51.62–57.6 Gy. IMRT was delivered via 9 fixed-gantry angles with step-and-shoot treatment techniques. All of the patients were treated with 1 fraction daily, for 5 days per week.

After the initial treatment, patients were followed up every 3 months during the first 3 years, every 6 months during the next 2 years, and then annually. Chest radiography, abdominal ultrasound, MRI of the nasopharynx and cervical region, and laboratory analysis were performed at each assessment. CT of the chest and abdomen, and SPECT of the entire body were performed every 6 months.

Local recurrence, regional lymph node recurrence, and distant metastasis were confirmed based on pathological examination or imaging findings along with clinical follow-up. SPTs were diagnosed based on the criteria of Warren and Gates [33].

All statistical analyses were performed using the SPSS 22.0 statistical package (SPSS, Chicago, IL). Survival time was calculated from the date of treatment initiation to the date of death or the last follow-up. The χ2 test was performed to assess the associations between metastasis and clinicopathological parameters. The Kaplan-Meier method with a log-rank test was used to calculate the survival rate. To assess the effects of clinicopathological parameters on survival, The Cox proportional hazards regression model was used for univariate and multivariate analyses. Factors were included in univariate analysis as follow: sex, age, clinical stage (T stage, N stage), overall IMRT time, chemotherapy (concurrent chemotherapy, neoadjuvantchemotherapy, adjuvantchemotherapy). All statistical tests were two-tailed, and a P value of <0.05 was considered statistically significant.

We are grateful to Ying Chen, the head of the Department of Administration and Office of Disease Process for her help during follow-up.

The authors have no actual or potential conflicts of interest to declare.