Breast cancer (BC) is a lethal malignancy that arises in the breast tissue or ducts. It is a major cause of morbidity and mortality in women worldwide [1]. There were an estimated 231,840 new cases of invasive BC among U.S. women in 2015 and 40,290 BC deaths [2]. BC risk factors include age, genetics, family history, younger age at menarche, and older age at menopause [3, 4]. Approximately 5%–10% of all BC cases are hereditary [5]. Previous studies have identified several genes associated with BC susceptibility in various populations such as ACYP2, MACC1, BRCA1, BRCA2, PTEN, CHEK2, BACH1, PALB2, RAD50, and TP53. [6–10]. Interestingly, rs11125529 in ACYP2 was associated with a risk of hormone-related cancers (breast, ovarian, and prostate) in a European population, [11, 12].

The ACYP2 gene is located on human chromosome 2 (2p16.2). This gene encodes an acylphosphatase (AcPase) that hydrolyzes the phosphoenzyme intermediates of various membrane pumps (e.g. the sarcoplasmic reticulum Ca2+/Mg2+-ATPase found in skeletal muscle) [13, 14]. It also has a potential role in maintaining Ca2+ homeostasis [15]. The primary functions of ACYP2 include pyruvate metabolism [11], cell differentiation [16–18], and programmed cell death (apoptosis) [19]. Apoptosis is involved in a variety of biological processes including embryonic development, immune system regulation, tissue homeostasis, and tumor suppression. Therefore, ACYP2 may regulate apoptosis [19, 20], and mutations in ACYP2 may promote tumorigenesis.

Previous studies have demonstrated that overexpression of ACYP2 promotes the differentiation of SH-SY5Y neuroblastoma cells [21]. Additionally, ACYP2 was associated with colorectal cancer metastasis [22]. However, few studies have investigated the association between ACYP2 and BC risk, particularly in a Chinese population. Here, we investigated whether seven SNPs in ACYP2 (rs6713088, rs12621038, rs1682111, rs843752, rs10439478, rs17045754, and rs843720) were associated with BC risk in a Han Chinese population. Our data indicate common SNPs in ACYP2 are associated with BC susceptibility.

A total of 183 patients with BC and 195 healthy individuals were enrolled in this study. The clinicopathological characteristics of the cases and controls are shown in Table 1. The average age was 46.40 ± 9.38 years and 45.35 ± 6.90 years in the case and control populations, respectively. The menopausal status (p = 0.716) and body mass index (BMI) (p = 0.056) distributions were similar between the BC patients and healthy controls. The basic information for the analyzed SNPs (chromosomal position, gene, allele, Hardy-Weinberg Equilibrium [HWE] test results, and minor allele frequency [MAF]) are shown in Table 2. The SNPs were in agreement with HWE (p > 0.05). The SNP call rate threshold was 98%.

Table 3: Genotypes among the cases and controls and the associations with breast cancer risk (adjusted for age group, body mass index, and menopause status)

We next analyzed the associations between SNPs in ACYP2 and patient clinicopathological features including age of menarche, tumor size (cm), duration of breast feeding (months), primiparous age, procreative times), clinical stage, lymph node (LN) metastasis, family history of cancer, incipient or recurrent tumor, estrogen receptor (ER) status, progesterone receptor (PR) status, tumor type, and fertility status. The results for positive associations are shown in Table 4. The GC + CC genotype of rs6713088 was present at a lower frequency in the tumor size > 3 cm cases (OR = 0.47, 95% CI = 0.26–0.91; p = 0.02) than the CC genotype. Moreover, the GC genotype of rs17045754 was present at a higher frequency in patients with BC recurrence (OR = 2.06, 95% CI = 1.05–4.034; p = 0.04) than the GG + CC genotype. There were no significant differences between the other clinicopathological features in the cases and controls (p > 0.05).

Table 4: The association between ACYP2 polymorphisms and the clinical characteristics of breast cancer patients 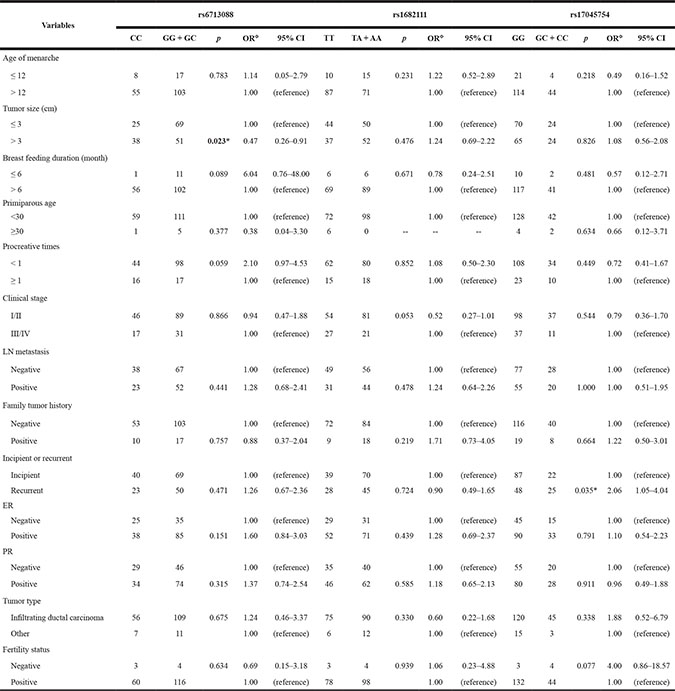 Table 6: The associations between ACYP2 haplotypes and breast cancer risk 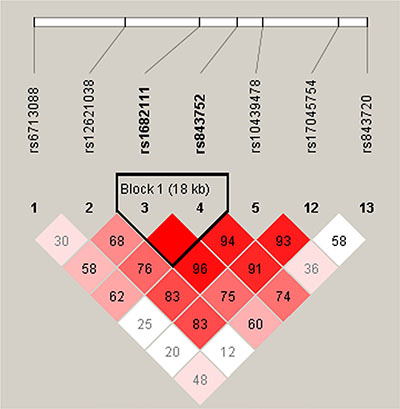 Figure 1: Haplotype block map for the seven SNPs analyzed in the ACYP2 gene.

We investigated associations between seven SNPs in the ACYP2 gene and BC risk in a Han Chinese population. Our results indicate that rs12621038, rs17045754, and rs1682111 are associated with the risk of BC. These findings were confirmed in an analysis of two independent patient populations. Two SNPs (rs12621038 and rs17045754) were associated with a decreased risk of BC and one SNP (rs1682111) was associated with increased BC susceptibility. Finally, rs6713088 genotypes were inversely correlated with tumor size, while rs17045754 was correlated with BC recurrence.

These results deviated from the expected frequency of the T allele in the general population compared to the reported frequency of rs12621038 in the Han Chinese population. The allele frequencies reported by the 1000 Genomes Project are: C-81.4% and T-19.6%, while the HapMap project reported the following frequencies: C-54.7% and T-45.3% in a Chinese population. In different Chinese ethnic groups and in Europeans, the genotype frequencies of rs12621038 vary significantly (C-79.2% and T-20.8%). Thus, different ethnic populations exhibit different allele distributions, which can result in altered interactions with environmental effects.

AcPases are small cytosolic enzymes (11 kDa) that are broadly expressed in vertebrate tissues. They exist in two different isoenzymatic forms: the muscle and organ-common types [23, 24]. Previous studies have demonstrated that AcPase nuclease activity on DNA in an acidic environment plays a role in DNA hydrolysis during apoptosis [19, 25, 26]. AcPases also hydrolyze phosphoenzyme intermediates generated by various membrane pumps [14] and may modulate Ca2+ homeostasis. Calcium can regulate both cell survival and death [27]. Indeed, deregulation of Ca2+ homeostasis is one of the first hallmarks of apoptosis [28]. Cancer cells can evade apoptosis through decreased expression of Ca2+-permeable channels to prevent calcium influx, acquire resistance to prolonged endoplasmic reticulum calcium deficiency, and down-regulate mitochondrial calcium uniporters [29]. AcPase pathways may be altered in various cancers, and overexpression of ACYP2 could decrease the risk of BC.

There are limited data on the relationship between tumor size and the risk of BC [30]. Recently, Nuyten et al. performed gene expression profiling to identify gene signatures that could predict BC [31]. We have provided the first evidence that polymorphisms in ACYP2 are associated with clinical outcomes in BC. Our data indicate that rs6713088 is associated with tumor size and that rs17045754 may be a genetic marker that could be used to predict BC recurrence.

A limitation of this study was the relatively small dataset, which decreased the statistical power to detect effects for rare SNPs. In addition, the results of our population comparison and logistic regression analysis indicated that none of the SNPs were significantly associated with BMI, menopausal status, or age. However, some studies have demonstrated that heterogeneity between different BC patient populations and between different BC therapies can modify the association between BMI and patient outcome. While these factors may confound the associations between genetic variants and BC to some degree, the relative similarities between our case and control populations indicated any confounding effects were reduced to a minimum. No significant associations were observed between the SNPs and the risk of BC after Bonferroni correction. This may be due to our relatively small sample size, the SNP selection criteria (minor allele frequency > 5%), and inherent weaknesses of the Bonferroni correction itself (the interpretation of the results depends upon the number of comparisons performed). Multiple independent studies with large sample sizes are required to validate our findings.

The study participants were either newly diagnosed BC patients or cancer-free controls (based on history and screening). Participants were recruited from clinics at the First Affiliated Hospital of Xi’an Jiaotong University between August 2013 and December 2015 as part of the Disease Management Project. The inclusion criteria for the BC group were the following: age > 18 years of age and histologically confirmed BC. Patients who received chemotherapy or radiotherapy before surgery, or who had another type of cancer were excluded. Cancer-free controls were selected based on physical examinations at the same hospital and were matched with the cases according to race and age (in 5-year age groups). All participants were Han Chinese and were recruited from regions in Northwest China. Participants gave informed consent and completed a personal interview regarding risk factors, medical history, family history, and lifestyle. Blood samples were collected from all participants. The study was approved by the Department of Oncology Surgery at the First Affiliated Hospital of Xi’an Jiaotong University.

We randomly selected seven potentially function SNPs in the ACYP2 gene (rs6713088, rs12621038, rs1682111, rs843752, rs10439478, rs17045754, and rs843720) for analysis. The SNPs were selected based on population and MAF > 5% using dbSNP (http://www.ncbi.nlm.nih.gov/projects/SNP). These SNPs represented the majority of known common variants in ACYP2. Genotyping was performed using a Sequenom MassARRAY RS1000 (Sequenom, Inc., San Diego, CA, USA) according to the manufacturer’s instructions. Briefly, locus-specific polymerase chain reaction (PCR) amplification was performed and the products purified by addition of shrimp alkaline phosphatase. Single base extension was then performed using primers that annealed immediately upstream of each SNP. Finally, the alleles were determined by mass spectrometry of the extended primers. The primers used for each SNP are listed in Table 7.

Statistical analyses were performed using SPSS version 17.0 for Windows (SPSS, Chicago, IL, USA). Population characteristics were compared using independent t-tests (Levene’s test to assess the equality of variances) for continuous variables and Chi-square tests for categorical variables. The PLINK software package (version 1.07) was used to assess possible heterogeneous associations across populations. All populations were tested for HWE. Genotype and allele effects were analyzed using Chi-square tests. ORs and CIs were calculated from the combined results of both populations after adjustment for age, BMI, and menopause status.