Purpose: This study aimed to explore the localization and expression of P-element-induced wimpy testis-like 2 (piwil2)/Piwil4 in hepatocellular carcinoma (HCC) tissues, and analyze the correlation between co-expression pattern and prognosis of HCC.

Methods: HCC pathological tissue samples with follow-up information (90 cases) and 2 normal control liver tissues were collected and made into a 92-site microarray. The expression of Piwil2 and Piwil4 was detected using the immunofluorescence double staining method. The differences in the expression and location of Piwil2 and Piwil4 in tumor cells were explored, and the influence of such differences on the long-term survival rate of HCC was studied using Kaplan-Meier survival curve and log-rank test. The clinical staging was analyzed according to the HCC international TNM staging criteria.

Primary liver cancer is one of the most common malignant tumors of the digestive system, of which 80%-90% is hepatocellular carcinoma (HCC). The morbidity and fatality rates rank fifth and third, respectively, among the malignant tumors in the world [1, 2]. Radical excision is the main surgical treatment for liver cancer, but the high metastasis and relapse rates after operation severely affect the long-term survival of patients with HCC. P-element-induced wimpy testis (PIWI) protein plays an important role in stem cell self-renewal, spermatogenesis, RNA interference (RNAi), transposon silencing, transcriptional control, genetic recombination, genetic programming, and so on [3-5]. Piwil2 is the key regulation gene for self-renewal of germ stem cells, and it regulates the self-renewal of germ stem cells and orderly development of sperms cooperatively with molecular chaperone Piwil4 [6-8]. It has been reported that the expression of Piwil2 and Piwil4 in malignant tumors may be related to the occurrence, development, and prognosis of tumors [9-11]. Piwil2 protein activates the STAT3/Bcl-XL pathway to inhibit apoptosis, which is widely expressed in various tumors [12]. It may greatly promote the occurrence and metastasis of tumors [10, 13-15]. The expression level of Piwil4 protein is increased in soft tissue sarcoma and colon cancer, which is importantly related to poor prognosis and increased risk of metastasis [11, 16]. However, the influence of a single marker (Piwil2 or Piwil4) on the biological behavior and long-term survival, which is used to judge the development or prognosis of tumors, is very difficult. Furthermore, the reports on the correlation between the co-expression of Piwil2/Piwil4 and the occurrence, development, and prognosis of tumors are limited. As molecular chaperones, Piwil2/Piwil4 are co-expressed and localized in the tumor tissue. Whether they can be used as the indicator for tumor development or prognosis still needs further exploration. This study used a tissue chip (high efficiency and high throughput) [17] and immunofluorescent double staining to explore the localization and expression of Piwil2/Piwil4 in HCC tissues and analyze the correlation between co-expression pattern and prognosis.

Expression of Piwil2 and Piwil4 in normal liver tissue 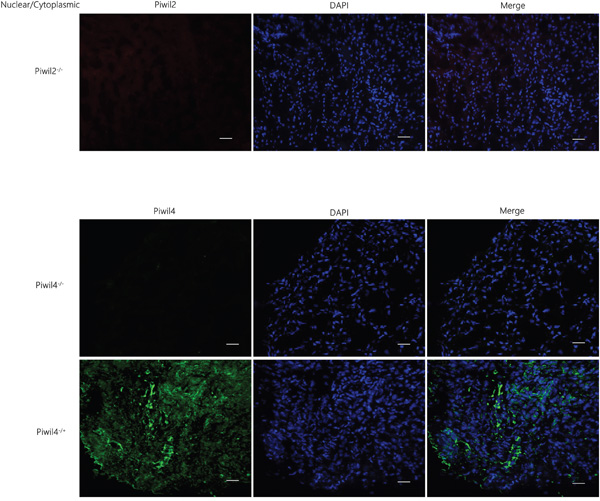 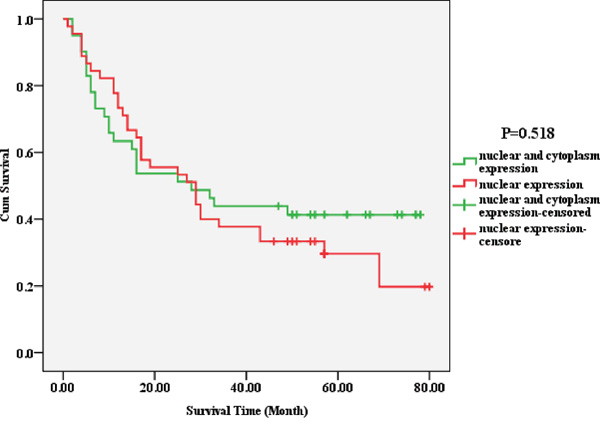 Table 1: Correlation between the localization and expression of Piwil2 and Piwil 4 and the prognosis of HCC 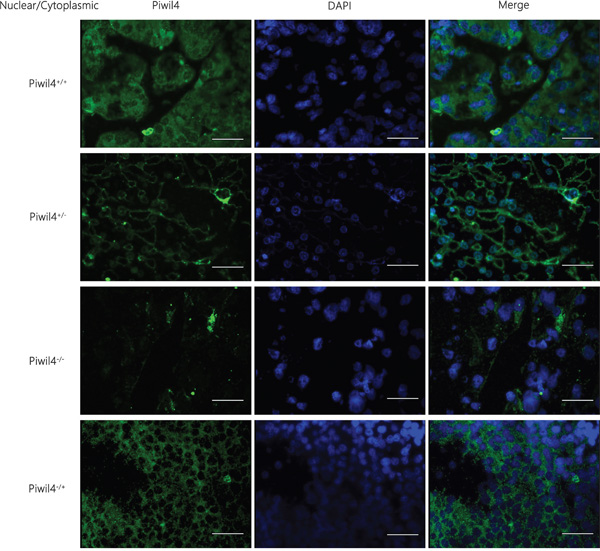 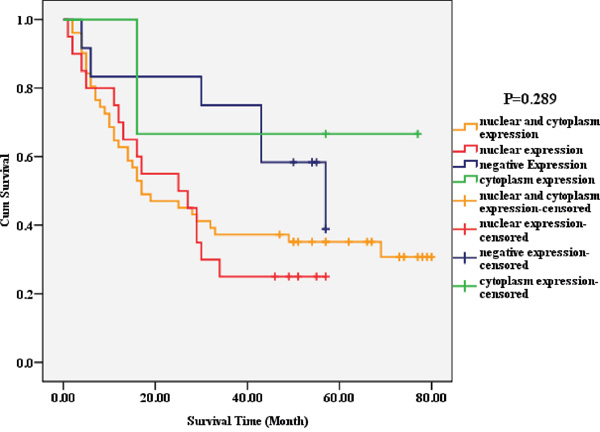 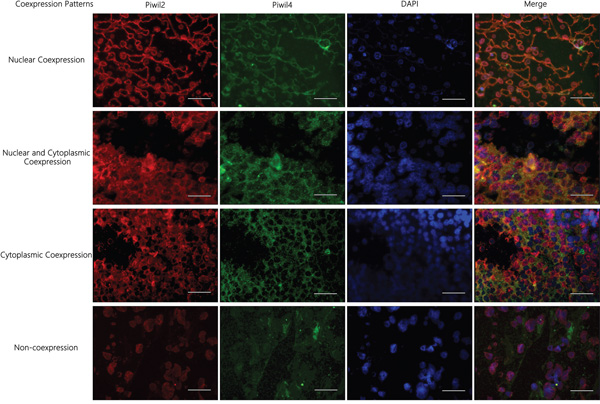 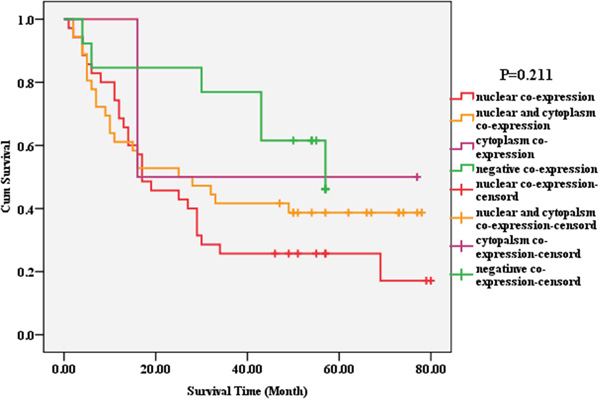 Table 2: Correlation between the localization and co-expression of molecular chaperone (Piwil2/Piwil4) and the prognosis of HCC

Malignant tumors severely threaten human health and obstruct social development. The metastasis, relapse, and chemoradiotherapy resistance also severely influence the patient long-term survival rate, which needs to be solved. HCC is one of the most common malignant tumors in the digestive system. The high morbidity, high fatality, and high postoperative metastasis relapse rates severely affect the long-term survival of patients with HCC [18]. Therefore, it is crucial to explore a new effective biological indicator to perform prognosis judgment or develop a new adjuvant therapy as a target.

In the evolutionary process, the phenomenon that involves the specific degradation of highly conserved and isogenous mRNA induced by exogenous or endogenous double-strand RNA (dsRNA) is called RNAi, which is an important mechanism for post-transcriptional gene silencing (PTGS) [19-21]. The PIWI family (core components of RNAi) is one of the two subfamilies (AGO and PIWI) of the Argonaute protein family, including PAZ and PIWI structural domains [3, 22]. The PIWI subfamily was first found in germ stem cells from Drosophila by Lin et al. in 1997 [23]. It was found to play a very important role in the self-renewal of stem cells, spermatogenesis, RNAi, transposon silencing, transcription regulation, genetic recombination, genetic programming, and so on [3-5]. The human PIWI gene family has four members: Piwil-like 1 (Piwil1/Hiwi), Piwil-like 2 (Piwil2/Hili), Piwil-like 3 (Piwil3), and Piwil-like 4 (Piwil4/Hiwi2) [24]. Piwil2 and Piwil4 are molecular chaperones, which cooperatively regulate the self-renewal of germ stem cells and spermatogenesis [6-8, 25].

High expression of Piwil2 protein has been reported to promote tumorigenesis, and the increased expression level of Piwil4 is also related to poor prognosis and increased risk of metastasis [10, 11, 13-16]. The study indicated that the self-renewal and proliferation regulation mechanism of germ stem cells could be involved in the occurrence of cancer stem cells (CSC) [26]. Piwil2 might be the molecular marker of pretumor stem cells [15], playing an important promoting role in tumorigenesis. CSC-like cells obtained using human fibroblasts with a single transcription factor Piwil2 (unpublished) were called Piwil2-induced cancer stem cells (Piwil2-iCSC). The Piwil2-iCSC tumor tissue was proved to be an embryonal undifferentiated carcinoma, which supported the effect of Piwil2 on the occurrence and development of tumors. The increased expression level of Piwil4 was related to soft tissue sarcoma and colon cancer metastasis. A new study also demonstrated that the lack of PIWI/PiRNA involvement would lead to the occurrence of testiculoma [27].

However, all the aforementioned studies focused only on the influence of expression of a single indicator (Piwil2 or Piwil4) on tumor biological behavior and long-term survival. They could not be used to judge the occurrence and development of tumors. No reports are available on the influence of localization and co-expression of Piwil2/Piwil4 molecular chaperone on the occurrence and development of tumors. In the present study, tissue chips combined with the immunofluorescent double staining technology were used to explore the difference in the intracellular localization and expression of Piwil2 and Piwil4. Furthermore, the difference in the prognostic evaluation between Piwil2, Piwil4, and Piwil2/Piwil4 co-expression was also recorded, and the correlation between the expression of molecular chaperone and the prognosis of HCC was analyzed.

So far, the detailed molecular biological mechanism underlying the influence of Piwil2 and Piwil4 on the occurrence, development, and prognosis of HCC is still unclear, which needs further exploration. The present study was the first to perform such correlation analysis as well as explore the correlation between the cytoplasmic co-expression of Piwil2/Piwil4 and the prognosis of HCC. The molecular chaperone Piwil2/Piwil4 seems quite promising as an important molecular marker for prognosis judgment, and a single marker (Piwil2 or Piwil4) cannot be used as the indicator for the prognosis of HCC.

In the enrolled 90 cases, the patients died of HCC in the follow-up, accounting for 63.33% (57 cases) of the patients in the study. In the 33 survivors, the median follow-up time was 57 months (46-80 months), of which the follow-up time of 21 patients did not reach 5 years. The molecular biological mechanism could not be explored due to the limited sample size and follow-up time. Large-sample studies will be helpful in analyzing the correlation between the co-expression of Piwil2/Piwil4 and the prognosis of HCC. They can provide the theoretical basis for the molecular marker of early-stage diagnostic and prognostic evaluation, and targeted tumor therapies.

All the 90 HCC and 2 normal control samples were obtained from the tissue bank of Shanghai Outdo Biotech Co., Ltd. (HLiv-HCC180Sur-04). All the tumor samples were diagnosed with HCC and did not receive chemotherapy or radiotherapy. Two normal control samples were obtained from two male adult patients (aged 31 and 48 years) who received partial hepatectomy due to trauma. The surgery time was from August 2006 to November 2009, and the follow-up deadline was September 2013 with a period of 4-7 years. The enrolled samples included 81 males and 9 females, aged 25-73 years with a median age of 54 years. Other clinical pathological indicators and survival conditions are shown in Table 3. The clinical staging was analyzed according to the HCC international TNM staging criteria published by American Joint Committee on Cancer (2012).

Carcinoma tissues and normal control tissues were fixed in 10% formaldehyde solution, hydrated routinely, and embedded in paraffin blocks. The embedded tissues were sliced and stained with hematoxylin and eosin, which was further diagnosed by pathologists. The target tissues were marked under a microscope. A tissue microarray (Beecher Instruments Inc.) was used to punch in the receptor blank paraffin blocks (diameter 1.5 mm). The target tissue chip was obtained from the marked location and placed into the microarray. The aforementioned steps were repeated, and finally a 92-site microarray was achieved with carcinoma and normal control tissues. The 5-μm-thick slice thus obtained was adhered onto a glass slide, making a tissue chip.

The HCC tissue chips were dried in a 60°C oven and dewaxed. After repair under high pressure by antigen, the serum was added to the block. Then, the primary antibody (Piwil2 1:100; Piwil4 1:50) was added for incubation at 4°C overnight, and the fluorescent secondary antibody was added at 37°C and incubated avoiding light for 30 min. DAPI was used to stain for 10 min, and the chips were blocked by the anti-fluorescence quenching sealing liquid. The protein precipitation was observed under a fluorescence microscope.

SPSS17.0 (SPSS, IL, USA) was used to analyze the data. Kaplan-Meier survival curve and log-rank test were used to analyze the correlation between the difference in the localization and expression of a single marker (Piwil2 or Piwil4) and molecular chaperone (Piwil2/Piwil4), and the prognosis of HCC. A P value <0.05 was considered statistically significant.

The authors would like to thank Lianju Shen, and Chunlan Long for their expert assistance, and comments on the manuscript.

This work was funded by the National Natural Science Foundation of China (81170556, 81070475), and supported by the Program for Innovation Team Building at Institutions of Higher Education in Chongqing, 2013.