Previous studies showed an association between the ZNF208 gene and gastric cancer. In this study, we investigated the association between single nucleotide polymorphisms (SNPs) in ZNF208 and the risk of esophageal cancer in a Chinese Han population. We conducted a case-control study that included 386 cases and 495 controls. Five SNPs were selected from previous genome-wide association studies and genotyped using the Sequenom MassARRAY platform. Unconditional logistic regression was used to calculate odds ratios and 95% confidence intervals after adjustment for age and gender. Logistic regressionl analysis showed that two SNPs (rs8103163 and rs7248488) were associated with an increased risk of esophageal cancer under different inheritance models after Bonferroni correction. Haplotype analysis suggested that the four variants comprised one block, and that the Grs2188972Crs2188971Crs8103163Crs7248488 haplotype was significantly correlated with an increased risk of esophageal cancer. Our data indicate that variants in ZNF208 are contribute to the susceptibility to esophageal cancer in a Chinese Han population.

Esophageal carcinoma is the sixth leading cause of cancer-related mortality worldwide [1]. Previous studies have demonstrated that China has the highest incidence of this aggressive malignancy [2]. The incidence rate was 186.34/105 person-years in China [3] compared to 8.34/105 person-years among Caucasian men in the U.S. [1]. The main risk factors for esophageal cancer are gastroesophageal reflux disease, smoking, and obesity [4–7]. However, only a subset of individuals who are exposed to these environmental risk factors actually develop esophageal cancer, suggesting that others factors (e.g. heritable) may also impact susceptibility.

Single nucleotide polymorphisms (SNPs) that are correlated with an increased risk of esophageal cancer have been identified previously [8–10]. The Zinc finger protein 208 (ZNF208) gene is located in the p12 region of human chromosome 19. ZNF208 is a member of the Zinc finger family of proteins, which bind to DNA through a series of zinc finger motifs and regulate gene transcription [11, 12]. Mutations in ZNF208 have been observed in gastric cancer. Thus, it may act as a tumor suppressor [13]. This gene was also associated with the response to imatinib mesylate treatment in patients with gastrointestinal stromal tumor [14]. Recently, an association between one variant (rs8105767) within the ZNF208 gene and telomere length was identified in a genome-wide association study. Interestingly, r s8105767 was associated with the risk of neuroblastoma, but not osteosarcoma or leukemia [15]. This SNP was also associated with the risk of lung adenocarcinoma, but not colorectal, breast, or prostate cancer [16]. It was also not associated with chronic lymphocytic leukemia or glioma [17, 18]. This variant was associated with reduced telomere length and coronary artery disease in a European population [19]. However, this SNP was not associated with reduced telomere length in squamous cell carcinoma of the head and neck in a Chinese Han population [20], and it was also not associated with gastric cancer susceptibility [21].

The five SNPs that were genotyped are shown in Table 1. All SNPs were in Hardy-Weinberg equilibrium (HWE) in the control samples. The SNP distribution frequencies were calculated according to the genotyping data for the case and control groups. The minor allele frequencies are also shown in Table 1. All the alleles of the SNPs had non-significant Chi-square (χ2) values.

Table 2: Logistic regression analysis of the association between SNPs and esophageal cancer risk

*Adjusted for age and gender.

Association between haplotypes in ZNF208 and esophageal cancer 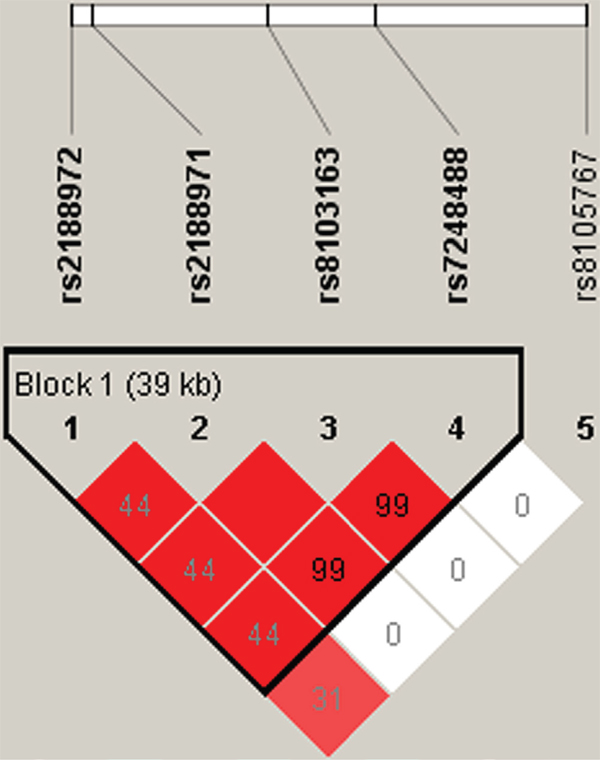 *Adjusted for age and gender.

Zinc finger proteins are the largest family of transcriptional regulators. These proteins have critical roles in cell differentiation and development. There is evidence that Zinc finger proteins are broadly involved in tumorigenesis [26, 27]. Wang et al. [26] showed that ZNF300 promoted carcinogenesis by modulating the NF-γB pathway. Additionally, overexpression of ZNF300 stimulated cancer cell proliferation in vitro and significantly enhanced tumor development and metastasis in a xenograft mouse model. Another study demonstrated that ZNF280B promotes prostate cancer cell growth and survival through down-regulation of p53 [28]. Wang et al. determined that the ZNF motif (Cys2-His2) in ZNF425 was the main region responsible for the transcriptional repression activity of this protein [29].

The conserved C2H2 motif is also present in ZNF208, suggesting that it may be involved in cancer development and progression. Rink et al. [14] found that the expression of the ZNF43, ZNF208, and ZNF91 genes was correlated with the response to imatinib mesylate in patients with gastrointestinal stromal tumor. Depletion of any of the genes could alter treatment response. In another study of gastric cancer [13], the activity and mRNA expression of ZNF208 were reduced as a consequence of somatic mutations, suggesting ZNF208 has a central role in tumor suppression. In our study, rs2188972, rs2188971, rs8103163, and rs7248488 were associated with the risk of esophageal cancer. All four SNPs are either intronic or 3’ UTR variants, which do not alter the coding sequence of the protein (Table 2). However, these SNPs may regulate transcription and affect gene expression.

Given the limited value of analysis of a single SNP, we evaluated the association between haplotypes in the ZNF208 gene and esophageal cancer susceptibility. The ATAA haplotype accounted for 32.15% (case group) and 30.1% (control group) of all possible marker combinations (Table 3). After adjustment for gender and age, the results showed that the ATAA haplotype was associated with a significantly increased risk of esophageal cancer.

Although our study has provided evidence for an association between genetic variants in ZNF208 and esophageal cancer, the results should be interpreted with caution. A post-hoc power analysis showed that all of the SNPs failed to reach the minimum level of statistical power (75%) for a case-control study. Thus, although the differences difference were statistically significant, the results must be verified in studies with larger sample sizessize. Our study had several limitations. First, selection bias and the limited sample size may have increased the number of false positive associations. Second, many other risk factors for esophageal cancer (e.g., smoking, alcohol consumption, pathology) were not included in the analysis. Finally, we did not analyze the biological functions of the mutations, which should be investigated in future studies.

Patient data and venous blood samples were collected starting in May 2014 at the First Affiliated Hospital of Xi’an Jiaotong University. A total of 386 cases and 495 controls were enrolled in our study. The case group consisted of inpatients who were diagnosed with pathologically verified esophageal cancer. All subjects participated in the screening program by undergoing an endoscopic staining examination with 1.2% iodine solution, and biopsies were collected from unstained areas of the mucosa. Tissue sections were reviewed by two experienced pathologists in order to ensure tumor cell purity > 50% and confirm the histological type. None of the patients had a history of other cancers or had received chemotherapy or radiotherapy. Patients who had comorbidities such as diabetes mellitus, hypertension, or any endocrine disorders were excluded. The controls were cancer-free individuals recruited from the health checkup center at the same hospital. Patient demographic data were also collected. All subjects were genetically unrelated Han Chinese and local residents of Northwest China.

The study was approved by the Clinical Research Ethics of Northwest University and Xi’an Jiaotong University. Written informed consent was obtained from all participants. Venous blood samples (5 mL) were collected from each subject into tubes containing EDTA, centrifuged, and stored at -80°C.

Few studies have investigatedinvestigate the associations between SNPs in the ZNF208 and esophageal cancer. We searched Pubmed and the Hapmap database for ZNF208 SNPs with a MAF > 0.05 in the Chinese Han population. Five SNPs (rs2188972, rs2188971, rs8103163, rs7248488, and rs8105767) were selected for our study. Genomic DNA was extracted from the whole blood samples using the GoldMag-Mini Purification Kit (GoldMag Co. Ltd. Xian, China) according to the manufacturer’s instructions. DNA concentrations were measured using a NanoDrop 2000 (Thermo Scientific, Waltham, Massachusetts, USA). SNPs were genotyped using the Sequenom MassARRAY RS1000 and the manufacturer’s protocol [30]. The Sequenom MassARRAY Assay Design 3.0 software was used to design a multiplexed SNP MassEXTEND assay [31]. The Sequenom Typer 3.0 Software (Sequenom, Inc) was used for data management and analyses [30, 31].

Genotype frequencies in the control subjects were tested for departure from HWE using χ2 tests. The genotype and allele distributions in the esophageal cancer patients and control subjects were compared using χ2 tests. ORs and 95% CIs were calculated by unconditional logistic regression analysis in co-dominant, additive, recessive, and dominant models after adjustment for confounding factors such as gender and age [32]. A two-sided p < 0.05 was considered statistically significant. The statistical analyses above were performed using Microsoft Excel and SPSS 20.0 (SPSS Inc., Chicago, IL, USA). Linkage disequilibrium and haplotypes were analyzed with the SHEsis software [33]. The Sampsize platform (http://sampsize.sourceforge.net/iface/s3.html) was used to evaluate the statistical power of this case-control study.