A large number of terpenoids exhibit potential geroprotector and anti-cancer properties. Here, we studied whole transcriptomic effects of Abisil, the extract of fir (Abies sibirica) terpenes, on normal and cancer cell lines. We used early passaged and senescent none-immortalized fibroblasts as cellular aging models. It was revealed that in normal fibroblasts, terpenes induced genes of stress response, apoptosis regulation and tissue regeneration. The restoration of the expression level of some prolongevity genes after fir extract treatment was shown in old cells. In Caco-2 and AsPC-1 cancer cell lines, Abisil induced expression of both onco-suppressors (members of GADD45, DUSP, and DDIT gene families), and proto-oncogenes (c-Myc, c-Jun, EGR and others). Thus, the study demonstrates the potential anti-aging and anti-cancer effects of Abisil on senescent and cancer cell lines.

It is known that certain plant extracts have geroprotector properties. The ability to prolong the life in animal models observed for extracts of hawthorn [1], Ginkgo biloba [2], blueberry [3], Rosa damascena [4], ginseng [5], cranberry [6], green tea [7], Nymphaea root [8], Alpinia zerumbet leaf [9], natto [10], Rhodiola rosea [11], black rice [12], garlic [13], apple [14], Stachys lavandulifolia [15], and others. Anti-cancer agents can act as anti-aging drugs [16, 17]. Specific subjects of interest are terpenoids (isoprenoids), the largest class of naturel products that consist of more than 30 000 individual compounds [18-20]. They are found in animal, fungi and microbial species, but most of terpenoids are of plant origin [21-23]. Plants produce terpenoids both as primary metabolites and as secondary compounds [24]. Most of terpenoids are derived from a five-carbon precursor isopentenyl diphosphate (IPP) in acetate/mevalonate (Ac-MVA) pathway [25]. However, some of ones are produced via recently discovered non-mevalonate (non-MVA) pathway [26, 27]. Terpenoids have different functions; in plants they are involved in basic cellular processes such as cell growth and development, cellular membrane maintenance, stress response, and specialized metabolism [28, 29]. A wide range of terpenoids have exhibited anti-cancer and geroprotector activities and are the candidate compounds for drug discovery [30-32]. For example, extracts from Rosa damascene, that is rich in such terpenoid as citronellol, have been shown to increase lifespan of Drosophila by protecting against iron toxicity and enhancing flies resistance to oxidative stress [30, 33, 34]. Betulinic acid, a lupane-type triterpene derived from birch tree (Betula spp.), have demonstrated the anti-bacterial, antimalarial, and anti-inflammatory properties, activity against the human immunodeficiency virus (HIV), and cytotoxicity towards cancer cells [35-37]. Moreover, both the anti-aging and anti-cancer properties have been observed for such terpenoids as ursolic, maslinic and oleanolic acids [14, 38-41]. Thus, the anti-cancer activity and geroprotector properties of terpenoids appear to be promising for various therapeutic applications.

We studied whole transcriptomic effects of Abisil, the extract of Abies sibirica terpenes (10% bornyl acetate), on human cell lines of colon adenocarcinoma (Caco-2), pancreas adenocarcinoma (AsPC-1) and human none-immortalized fibroblasts of the 6th and 13th passages from the point of view of potential geroprotector and anti-cancer properties.

Differentially expressed genes that were affected by drug treatment in different cell lines were identified (Supplementary Table S1). Abisil changed the expression of genes involved in the adaptive cellular stress response (by 2 and more times, FDR<0.05) regardless of the number of passages of normal fibroblasts. Among affected genes are heat shock protein 70 (HSPA1B, HSPA1A), heme oxygenase-1, metallothionein 1X, and dual specificity phosphatase 2 (DUSP2).

DUSP2 dephosphorylates MAPKs are involved in cellular proliferation, apoptosis, differentiation, and stress responses [42]. It is known that such geroprotectors and hormetins as curcumin induces expression of an endoplasmic reticulum-anchored enzyme heme oxygenase-1 [43], which is involved in the adaptive response of human fibroblasts to oxidative and chemical stresses [44, 45]. It utilizes the heme in the various proteins and release ferrous iron [46]. In turn metallothioneins (e.g. MT1X) are induced during cellular stress response involved in detoxification of metal ions [47].

There are also genes associated with the immune response, such as BHLHE40 [48] and IFIT2 [49], and factors related to cell differentiation, such as FOSB [50] and TRIB1 [51]. In addition, TRIB1 plays role in lipid metabolism [52]. The upregulated gene Egr-3 is a transactivator of genes in fibroblasts, associated with tissue remodeling and wound healing [53].

In fibroblasts of both the 6th and 13th passages Abisil suppressed the expression of proapoptotic gene BMF [54] as well as molecules of cell adhesion: integrins ITGB7, ITGAM [55] and cell surface glycoprotein MUC13 [56].

It should be noted, that among the most represented molecular pathways induced by Abisil treatment in normal fibroblasts, a significant portion is related to longevity, including MAPK-, FOXO- and HIF-1 signaling pathways (Figure 1) [57]. 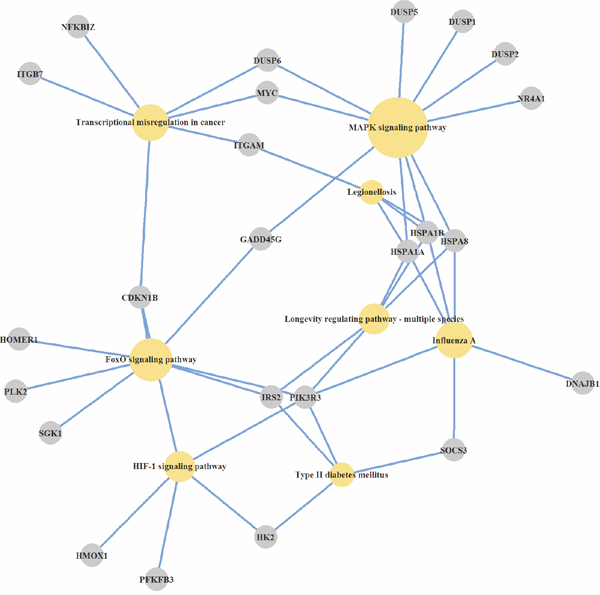 Figure 1: KEGG pathways, over-represented by genes, induced by Abisil in normal fibroblasts. Differentially expressed genes, cell pathways and processes at the organism level, wich are statistically significant over-represented in the GSEA-analysis, are presented.

In this study, fibroblast passaging was considered as one of the models of aging. Fibroblasts of the 13th passage exhibit various external signs of cellular aging, such as inhibition of proliferation as compared with the 6th passage (control). When comparing the expression of old and young fibroblasts 5804 differentially expressed genes were revealed generally.

The following aging-associated features of the expression profiles in fibroblasts should be noted: reduced expression of various cell adhesion molecules, chemokines expression, cyclin-dependent kinases, lamin, GADD45 family members, cAMP-dependent transcription factors (CREB), and PI3K/Akt overexpression. GSEA analysis allowed us to identify a number of biological processes, with the strongest changes in gene expression being (as part of this aging model): the suppression of angiogenesis, cell differentiation, MAPK cascade, chemotaxis, response to hypoxia, tissue regeneration and other processes, as well as modulation of intercellular communication, adhesion, migration, and ion exchange.

Also worthy of attention is the induction of compensatory changes for the following genes:

It is noteworthy the increased expression level of all three genes (GADD45A, GADD45B, and GADD45G) related to the GADD45 family - both in normal fibroblasts and tumor cell lines (AsPC-1 and Caco-2). GADD45 family proteins are stress sensors and involved in the intersection of several cell signaling pathways, including apoptosis, DNA repair, and cell cycle arrest [64]. Defects in the GADD45 genes often accompany the initiation and progression of malignancies, and GADD45 mediates the effects of multiple chemotherapeutic drugs [65]. For example, it has been shown that the sensitivity of prostate adenocarcinoma cell lines to docetaxel increased by enhancing the expression of GADD45A, but lack of GADD45 expression, however, can cause inefficiencies of chemotherapy [66]. Simultaneously GADD45 activity can have anti-aging effects as well [67, 68].

Table 1: The results of GSEA (GO) for the top 300 of overexpressed genes (Caco-2 and AsPC-1 cell lines, averaged) 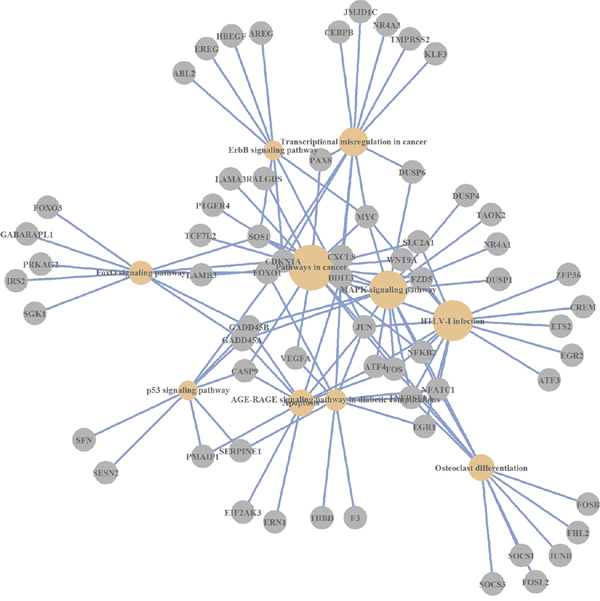 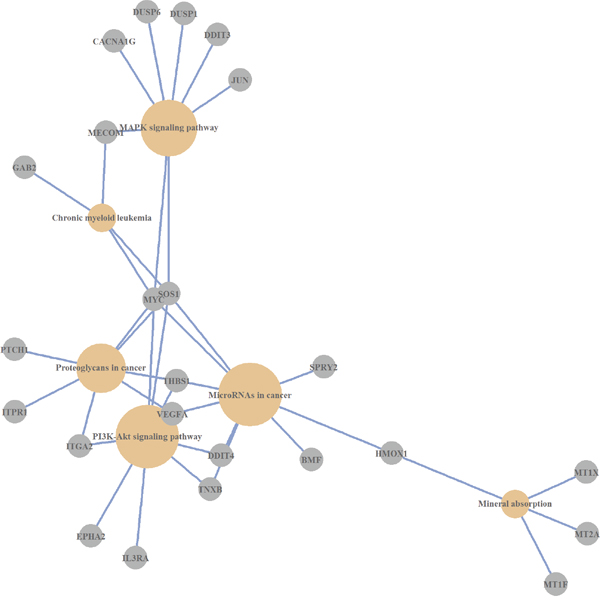 Of particular note is the increase in the expression of all three members of the GADD45 family genes which may serve as tumor suppressors. Chemotherapeutic drugs induced up-regulation of these genes is one of the factors, that determines the effectiveness of chemotherapy. Another important effect is the overexpression of most of the DUSP family genes responsible for the inhibition of the MAPK cascade, which plays a role in the response to chemotherapy as well.

The results of GSEA-Gene Ontology analysis allows one to make the assumption that the biological processes responsible for the negative regulation of apoptosis, prevail over the processes of induction of programmed cell death in normal human fibroblasts. In the cell lines Caco-2 and AsPC-1 the situation is reversed.

The potential geroprotector properties of Abisil may be conditioned by induced overexpression of both GADD45 gene family, and the family of heat shock proteins HSPA1A/A1B/A9, Hsp40 B1/B4/B9, and HSPH1.

Pharmaceutical composition Abisil® is a complex of terpenoids obtained from capsule extract Abies sibirica of Penaceae family enriched with monoterpenoids. Chemical and quantitative composition of the pharmaceutical composition of Abisil was studied with gas-liquid chromatography (GLC) by LCM-7A chromatograph (Chromatograph, Russia) using a thermal conductivity detector (TCD), packed column (length of 3.0 m, a diameter of 5 mm), and stationary phase “Apiezon L” (M&I Materials Limited, United Kingdom) on polychrome. The consumption of carrier gas (helium) was 30 ml/min, with a column temperature of 125°C, and a vaporization chamber temperature of 180°C. Identification of the main components was carried on the relative retention times and “bystander” compounds. The revealed Abisil composition is a standardized terpenoid substance derived from capsule extract of Abies sibirica (Table 2).

Table 2: The composition of Abisil

Primary fibroblasts were provided by The Laboratory of Cell Cultures of the Institute of Medical Cell Technologies (Ekaterinburg, Russia). Cells were maintained in the medium described above (with 10% FBS). Cells were passaged, when the culture had reached approximately 80% confluence. In order to save unique properties of the model, cells were frozen in DMEM with 7% DMSO and 30% FBS after the 4th and 10th passages. Effects were studied on the 6th and 13th passages.

Cells in 70% confluence were treated for 6 hours with dilution of Abisil (1.2 mg/ml) in DMEM with 2% FBS. After that, the culture medium was replaced with a fresh medium and in 18 hours cell viability was analyzed using MTS test (Promega, USA).

All cells including control cell lines were plated in triplicate. RNA extraction for further analysis was performed right after treatment with active substance dilution.

Total RNA was extracted from 24 samples using RNeasy Mini kit (Qiagen, Germany), including 4 cell lines after treatment (Caco-2, AsPC-1, and primary fibroblasts at the 6th and 13th passages) and corresponding control cells (all in triplicates). RNA quality and quantity was determined with the Agilent 2100 Bioanalyzer (Agilent Technologies, USA) and the Qubit 2.0 Fluorimeter (Thermo Fisher Scientific, Invitrogen, USA), respectively. RNA samples with an RNA integrity number (RIN) higher than 8.0 were used for downstream analysis.

No conflict of interest from all participating authors.

The work was supported by the Russian Science Foundation Grant no.14-50-00060.

A.K. and A.M. conceived and supervised the project. A.M., A.K., and G.K. designed the study and analyzed the data. A.L., A.S., and M.F. carried out the experiments. F.M. provided the Abisil and analyzed its composition. A.K., G.K., and A.M. wrote the manuscript. M.S. assisted in the preparation and writing of the manuscript.