Mucinous ovarian neoplasms represent a spectrum of malignant behavior, and have benign, borderline, and malignant histopathologic variants. Their malignant potentials are correlated to their pathologic features, [1], and it is not uncommon that mucinous adenoma (MA), mucinous borderline tumor (MBT) and mucinous carcinoma (MC) components can coexist within an individual mucinous ovarian neoplasm. [2-4] Moreover, the morphological transitions from MA to MBT and from MBT to MC can easily be recognized, which supports the hypothesis of a stepwise progression through the MA-MBT-MC sequence. [5-7]

To date, it has been well established that the Kras oncogene plays a pivotal role in tumorigenesis. Kras-activating mutations often occur on exon 2, which brings about constitutive activation of the protein by increasing GDP/GTP exchange or by decreasing GTPase activity of the protein, thus triggering increased cell proliferation. [8, 9] The prevalence of Kras mutations seems to be highly related to tumor histology. In general, Kras is one of the most frequently occurring genetic abnormalities in mucinous ovarian carcinomas, and Kras mutations occur more frequently in mucinous versus non-mucinous types of ovarian neoplasms. [9-11] Furthermore, identical Kras mutations in adjacent MA and MBT areas of MC have reinforced the aforementioned “MA-MBT-MC sequence” hypothesis. [12, 13]

Both colorectal and mucinous ovarian neoplasms share similar histopathologic and cytogenetic characteristics. The success of anti-epidermal growth factor receptor (anti-EGFR) therapy for patients of the Kras non-mutation group of colorectal cancer has raised the expectation that other malignancies, such as Kras non-mutation group of ovarian MC can also be treated with comparable success rates. [14] In this study, we aimed to obtain more information on the spectrum of Kras mutations along the histological continuum from normal ovaries through benign, borderline to malignant ovarian mucinous neoplasms.

Not any Kras gene mutation was detected in all cases of this type of ovarian tissue (n = 0/7). (Table 1) 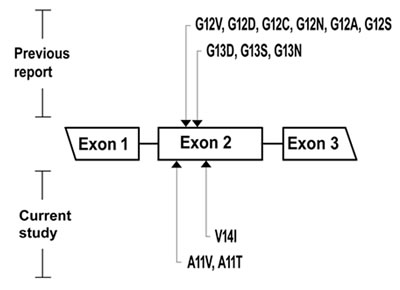 The frequency of Kras somatic mutations was 75.61% (n = 31/41) in this type of ovarian tissue, which consisted of both single and multipoint mutations subgroups. (Table 1) (Figure 2)

In addition to the previously reported codon 12 and 13 aberrations which harbored 9 mutations, we identified 3 novel mutations (A11V, A11T, V14I) based on the COSMIC (Catalogue of somatic mutations in cancer) database accessed on 12/06/2016. (Figure 1) 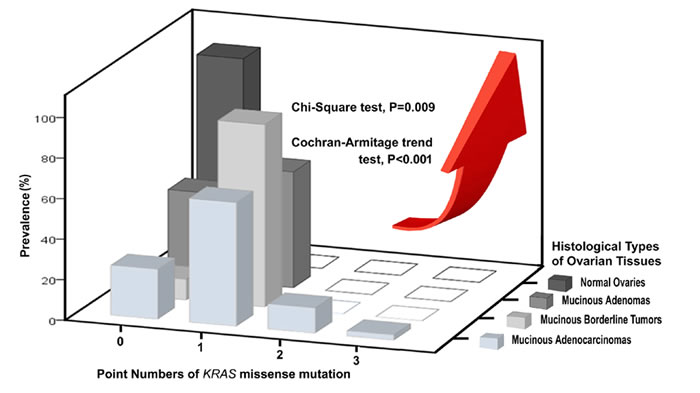 Mutation analysis of the Kras oncogene has now been established as a predictive biomarker in colorectal cancer, which signifies that wild-type Kras should respond to anti- EGFR treatment. Previous research has resulted in promising results. Sato N et al has reported that cetuximab inhibited the growth of ovarian MC cell lines which lacked the Kras gene mutation, but did not inhibit the growth of the other ovarian MC cell lines carrying the Kras gene mutation. [15] This encouraging finding prompted us to investigate the Kras mutation status and evaluate the possible therapeutic implications of anti-EGFR treatment for patients with advanced ovarian MC.

The assay used in this study, direct sequencing, allows for the detection of all mutations and is now considered to be the gold standard for mutation detection. [20] Several additional techniques are available, which have been developed since the location of Kras mutations is discrete. [21, 22] FemtoPath Kras Mutation Screen Kit is a PCR-based test using novel and proprietary primers which can specifically and sensitively amplify somatic mutations in the Kras gene and suppress the amplification of wild-type Kras gene in human genomic DNA. [23]

Our results identified 9 amino acid substitutions (G12V, G12D, G12C, G12N, G12A, G12S, G13D, G13S, G13N) at codons 12 and 13 in exon 2. We have also found 3 unusual missense mutations at codons 11 and 14 (A11V, A11T and V14I), which have never been reported in the COSMIC Kras mutations database in ovarian tumors, and thus should be considered novel oncogenic mutations. We suggest the introduction of both codons 11, 14 as hotspots for routine Kras mutational analysis in patients with different histologic types of mucinous ovarian neoplasms, rather than focusing only on codons 12 and 13. All above-mentioned mutations were determined to be somatic since the sections of 7 normal ovarian tissues showed wild type sequence. The functional impact of the novel mutations on KRAS protein requires further bioinformatics tools and molecular models. We detected one of the novel mutations (A11T) in 1 case of 7 MBTs and the other two (A11V, V14I) in 4 cases of 41 MCs. Our discovery of novel codon 11 and 14 mutations in exon 2 that are, so far, unique to Taiwanese patients may be attributed to the genetic variations amongst different racial/ ethnic groups. Alternatively, it may again be related to the lack of clinical studies on mutations other than those at codon 12 and 13 and could, in the future, prove to be frequent and non-racially restricted. Even though the sample size in this study was small, further large scale studies of various ethnicities and bio-functional analysis of the discovered novel mutations as well as their possible role in ovarian mucinous carcinogenesis merit further investigation.

Due to the presence of additional mutations, we also imagined that common Kras mutations in the neighboring MA and MBT areas might have been carried over into the adjacent MC parts. However, it is unclear at present whether the multipoint Kras mutations represent biologically molecular events or whether they designate the concurrence of different neoplastic clones within a given tumor.

The frequency of activating mutations of Kras at codons 11, 12, 13 and 14 indicate that Kras/MAPK is a crucial pathway in the carcinogenesis of ovarian mucinous tumor. Our discovery of 3 novel Kras mutations (A11T, A11V, V14I) that are, so far, unique to Taiwanese patients may be attributed to racial/ ethnic differences. Our study showed that the number of Kras missense mutations is positively associated with the increase of malignant potential along the normal ovary-MA-MBT-MC categorical sequence. Increasing the missense points of Kras oncogene mutation seems to result in stronger malignant potential. Additionally, multipoint Kras mutations (n = 2 or 3) can be regarded as a possible indicator of the ovarian mucinous carcinoma.

Sixty-five Taiwanese cases were selected from formalin-fixed, paraffin-embedded oophorectomy tissue blocks and retrieved from the archives of the Tissue Bank of the Clinical Trial Center, Chung-Shan Medical University Hospital. The tissue samples included 4-histological types of ovarian tissues, which consisted of 7 normal ovaries, 7 MA, 10 MBT and 41 MC. All of the donors’ identities have been permanently deleted. The research was conducted according to International Council on Harmonization (ICH) guidelines and compliant with all applicable regulations for the protection of human subjects for research, including review and approval by the Institutional Review Board of the Chung-Shan Medical University Hospital.

Two board-certified pathologists (CP Han and WR Chao) reviewed all hematoxylin-and-eosin-stained (H & E) slides for these cases. For the normal ovarian tissues, the sections of normal ovary containing cortical surface epithelia and epithelial lining of small inclusion cysts were sent for DNA extraction. For the neoplastic ovarian tissues, a representative H & E section was assessed and needle microdissection was performed on subsequent 10-mm sections to obtain a high percentage of tumor cells regardless of fibroblast cell components. DNA was extracted using the QIAamp® DNA FFPE Kit (Qiagen, Vialencia, CA, USA) according to manufacturer instructions. The candidate gene (Kras) mutation status was analyzed using the Kras mutant-enriched kit (FemtoPath®) according to manufacturer recommendations. Briefly, the self-competitive primer comprises a 5’-competing domain and a 3’-elongating domain. The 3’-elongating domain serves as a forward primer for a PCR-based amplification of the sample nucleic acid, and the sample nucleic acid with the mutation sequence is preferentially amplified over the wild type sequence.

Chi-squared test was used to compare the association between mutation status and different histopathological categories. Cochran-Armitage trend test was applied to assess for a trend of positive percentages across the ordinal variables. Data were analyzed using standard statistical software (SPSS, Inc., Chicago, IL). All tests were 2-sided and the significance level was 0.05.

This work was supported by National Chung Hsing University and Chung Shan Medical University, Taichung, Taiwan (grant: NCHU-CSMU-10501), Taiwan. We are extremely grateful to Professor Bernard A Schwetz, PhD and Miss Jennie Cheng, PhD for their expertise and patience in English correction and helpful comments.