Less is known about the roles of eukaryotic initiation factor alpha (eIF2α) in cholangiocarcinoma (CCA). Here, we report that eIF2α inhibitor salubrinal inhibits the proliferation of human CCA cells. Clinical application of mammalian target of rapamycin (mTOR) inhibitors only has moderate antitumor efficacy. Therefore, combination approaches may be required for effective clinical use of mTOR inhibitors. Here, we investigated the efficacy of the combination of salubrinal and rapamycin in the treatment of CCA. Our data demonstrate a synergistic antitumor effect of the combination of salubrinal and rapamycin against CCA cells. Rapamycin significantly inhibits the proliferation of CCA cells. However, rapamycin initiates a negative feedback activation of Akt. Inhibition of Akt by salubrinal potentiates the efficacy of rapamycin both in vitro and in vivo. Additionally, rapamycin treatment results in the up-regulation of Bcl-xL in a xenograft mouse model. It is notable that salubrinal inhibits rapamycin-induced Bcl-xL up-regulation in vivo. Taken together, our data suggest that salubrinal and rapamycin combination might be a new and effective strategy for the treatment of CCA.

Cholangiocarcinoma (CCA) is highly aggressive tumor arising from the epithelium of intrahepatic and extrahepatic biliary ducts [1–3]. The overall prognosis of CCA is very poor [2]. Resection treatment is the best option for CCA patients. However, resection treatment of CCA is associated with high rates of recurrence, and short survival times [4].

Adjuvant strategies, including chemotherapy, radiotherapy or combination treatment, are used to improve outcomes of CCA patients [5]. Cisplatin, 5-fluorouracil, epirubicin, leucovorin, mitomycin-C and gemcitabine either alone or in combination have been used to treat CCA [6, 7]. The first line chemotherapy for advanced CCA is the combination of gemcitabine and cisplatin [1, 8, 9]. The major drawbacks in clinical applications of cisplatin are the development of resistance by tumors and adverse side effect [7, 10, 11]. Despite intensified evaluation of other chemotherapy combinations with fluorouracil, oxaliplatin or irinotecan, the improvement in survival of CCA patients has been marginal [1, 12]. Several clinical studies have assessed the antitumor activity of molecular targeted therapies in CCA [13–16].

Mammalian target of rapamycin (mTOR) is a critical regulator of cell survival, metabolism, motility, and angiogenesis [17, 18]. Recent evidence suggests that deregulated activation of mTOR is important in CCA [18–22]. Therefore, CCA patients might benefit from mTOR pathway targeted therapies. Although mTOR inhibitors, such as rapamycin and its analogs, are considered as a potential strategy for several cancers, objective response rates with mTOR inhibitors in clinical trials are modest and variable [23, 24]. Recently, a report showed that dual inhibition of PI3K and mTOR by NVP-BEZ235 inhibits CCA cell growth efficiently [20]. It is important to investigate whether combination approaches can enhance the antitumor activity of mTOR inhibitors. 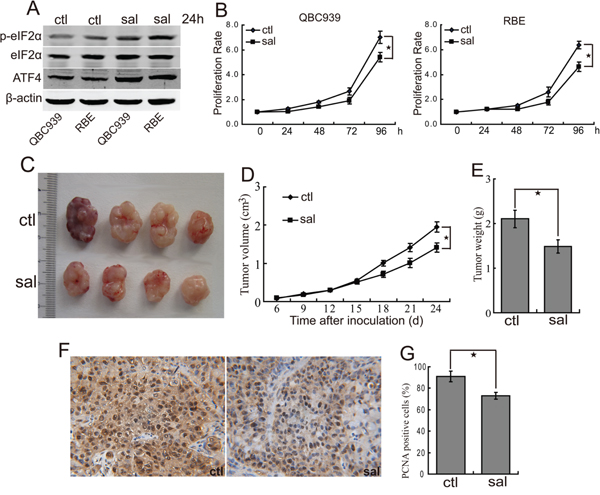 Figure 2: Salubrinal inhibits the proliferation of human CCA cells in vitro and in vivo. A. Salubrinal promotes the phosphorylation of eIF2α and expression of ATF4. After treated with salubrinal (sal, 25μM) for 24 h, p-eIF2α and ATF4 in QBC939 and RBE cells were analyzed using western blot. B. eIF2α blocking inhibits human CCA cells proliferation in vitro. QBC939 and RBE cells were treated with salubrinal (sal, 25μM) for indicated time periods, and cell viability was determined by CCK8 assay (*P < 0.05). C, D, E. Salubrinal suppresses the growth of CCA cells in mice. After mice were subcutaneously inoculated with 1×107 QBC939 cells for seven days, mice in the experimental group were administrated with salubrinal (sal, 1 mg/kg i.p, daily). Representative subcutaneous tumors are shown (C). Tumor size was measured every three days from day 6 through 24 after inoculation QBC939 cells into mice (D, *P < 0.05). The final tumor weight of each group was measured (E, *P < 0.05). F, G. Salubrinal inhibits CCA cells proliferation in vivo. Immunohistochemical staining of PCNA in tumor sections (F) were quantified by counting positive cells in 10 high-power fields (G, *P < 0.05). 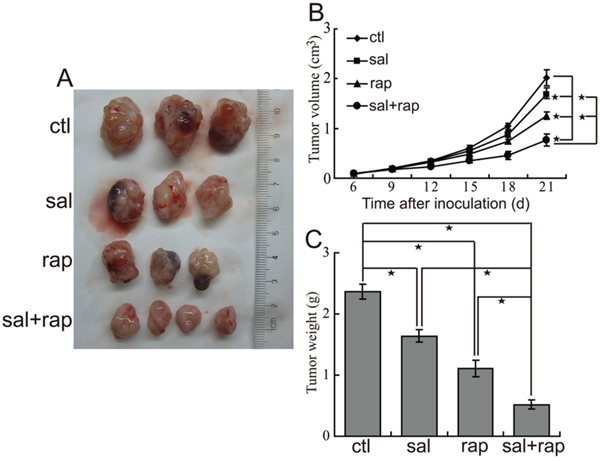 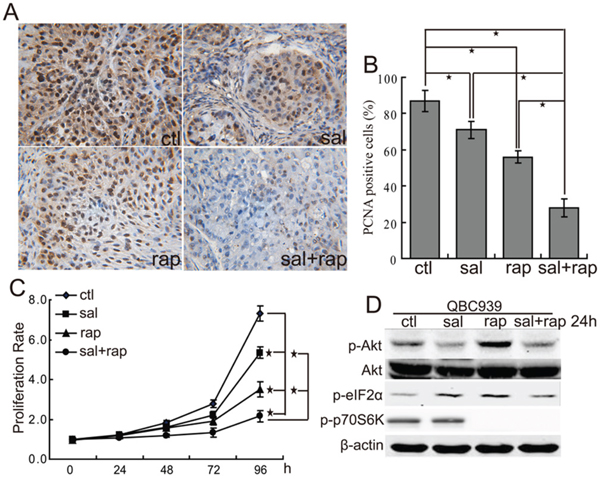 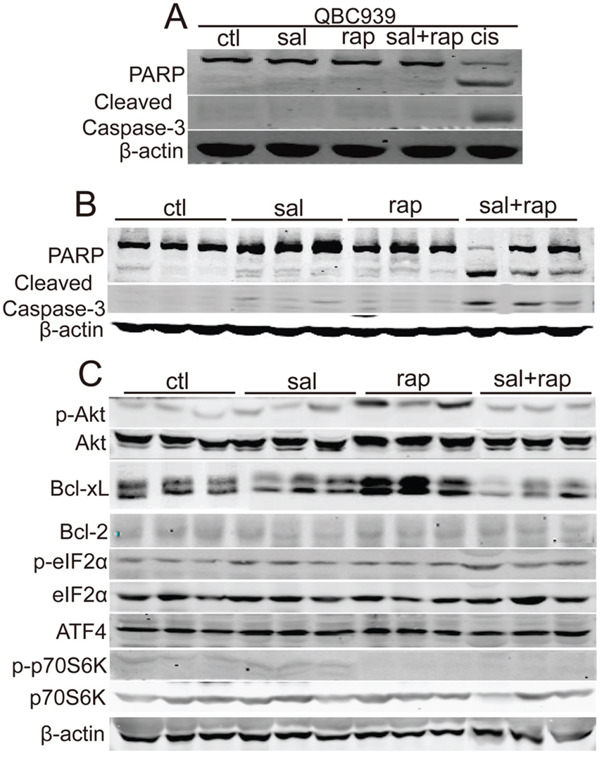 To investigate whether Bcl-xL up-regulation inhibits the antitumor activity of rapamycinin CCA, we treated nude mice suffering QBC939 xenografts with Bcl-xL inhibitor ABT-737 or/and rapamycin. The results demonstrated that ABT-737 treatment inhibited the growth of tumors (Figure 6A, 6B and 6C). Moreover, administration of ABT-737 combined with rapamycin displayed more antitumor effects compared with ABT-737 or rapamycin alone (Figure 6A, 6B and 6C). There were not obvious effects on the body weight of mice in animal studies described above (data not shown), indicating that single-agent ABT-737 and ABT-737 combined with rapamycin are likely well-tolerated. These data indicate that the combination treatment exerts additional antitumor activity. 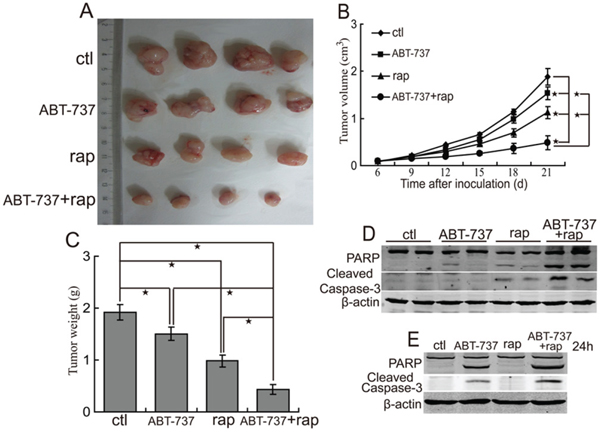 The mTOR pathway, which is often hyperactivated in cancer cells, is implicated in the carcinogenesis and progression of CCA [28–31]. This pathway can promote cancer cell growth as well as migration and invasion [30, 32]. It is known that inhibiting the proliferation and invasion of malignant biliary epithelial cells is a potential strategy for the treatment of CCA. Thus, mTOR inhibition might be a promising strategy for the treatment of CCA. Emerging data indicate that mTOR inhibitors only had moderate antitumor efficacy [33–35]. There are reports indicate that several molecular mechanisms, such as Akt activation induced by mTOR inhibition, might account for the limited antitumor effects of mTOR inhibitors [35–37].

In this study, we firstly analyzed the antitumor effects of mTOR inhibitor rapamycin in human CCA cells. Our data are consistent with the observation that rapamycin effectively inhibited the growth of CCA cells [35]. We also found that rapamycin treatment resulted in the activation of Akt in QBC939 and RBE cells. It is notable that rapamycin treatment induced the increase of p-Akt in a subcutaneous xenograft model. Since Akt signaling plays a key role in cancer cell proliferation and antiapoptosis, it is reasonable to suggest that mTOR-Akt negative feedback might play an essential role in suppressing the antitumor efficacy of rapamycin in CCA. It has been reported that combined targeting of Akt and mTOR can suppress CCA effectively [35]. Thus, combined inhibition of Akt and mTOR might be a potential therapeutic approach for CCA patients.

We and others have previously reported that the sensitivity of cancer cells to cisplatin and doxorubicin can be changed by eIF2α specific inhibitor salubrinal [25, 26, 38]. Here, our data show that salubrinal treatment inhibited the proliferation of human CCA cells in vitro and in vivo. Importantly, salubrinal combined with rapamycin synergistically inhibited the proliferation of CCA cells. Moreover, the combination of salubrinal and rapamycin induced CCA cells apoptosis in vivo, but not in vitro. Interestingly, our in vitro and in vivo data demonstrated that rapamycin-mediated p-Akt up-regulation was blocked by salubrinal in CCA cells. These results strongly suggest that salubrinal can augment the antitumor efficiency of rapamycin through Akt targeting.

In conclusion, salubrinal exerts direct antitumor effects on CCA through suppressing the growth of CCA cells, and the combination of salubrinal with rapamycin demonstrated a synergistic antitumor effect by regulating Akt and Bcl-xL signaling. These findings shed light on the molecular basis of eIF2α inhibitors alone or in combination with mTOR inhibitors and a possible new strategy for the treatment of CCA.

Human CCA cell lines QBC939 and RBE were cultured in RPMI-1640 medium supplemented with 10% fetal bovine serum and 1% penicillin/streptomycin in a humidified incubator containing 5% CO2 and 95% ambient air at 37 °C.

QBC939 and RBE cells were trypsinized and seeded at 3 × 103 cells/well in 96-well plates. After 24 h, inhibitors were added and incubated for indicated time periods. Then, 20 μL of CCK8 solution (5 g/L) in phosphate buffered saline (PBS) was added. After incubated for an additional 2 h, the absorbance value in each well was measured using a microculture plate reader (Bio-Tek, USA) at a wavelength of 490 nm.

Tissue samples embedded in paraffin were cut into 5μm sections and stained according to standard immunohistochemistry protocols.