Ovarian cancer is the second most common gynecological cancer worldwide [1]. In China, it is the leading cause of death from gynecologic cancer with approximately 52,100 new cases and 22,500 deaths in 2015 and with an estimated incidence to mortality rate of 43.1% [2]. Ovarian malignancies are surgically staged according to the International Federation of Gynecology and Obstetrics (FIGO) staging criteria [3]. The survival rate declines dramatically when the disease spreads out of the pelvic cavity and develops into advanced stages (FIGO stages III and IV) [3]. The reported 5-year survival rate is approximately 10%-30 % for advanced stages and 85%-90% for early stage (FIGO stage I-II) [4]. Unfortunately, more than 70% of patients are diagnosed with advanced stages [5].

Although the overall outcomes for early-stage EOC is generally optimistic, the actual reported recurrence rate ranges from 10% to 50% [6]. Clearly, some subgroups of early-stage EOC with unfavorable prognostic factors experience more relapses. Consequently, postoperative chemotherapy is required in high risk early stage patients. The major high risk factors for early stage patients include stage IC or higher, clear cell type, and poor differentiation according to current clinical practice guideline [7]. In contrast, fertility sparing surgery (FSS) is proved to be safe for selected patients [8]. Potential clinical and pathological factors are still being explored to tailor the treatment of early stage EOC patients. Recently, a model divided epithelial ovarian cancer into type I and type II ovarian cancer has been introduced. Type I tumors are slow growing, generally stage I at diagnosis and developed from well established precursor lesions [9]. FIGO staging criteria has been updated in 2014, emphasizing the different patterns of tumor rupture and positive cytology [10]. In this study, we restaged the EOC patients with the long-term follow-up using the latest staging system and took into account some new perspectives, aiming to help optimize the treatment for early stage EOC. 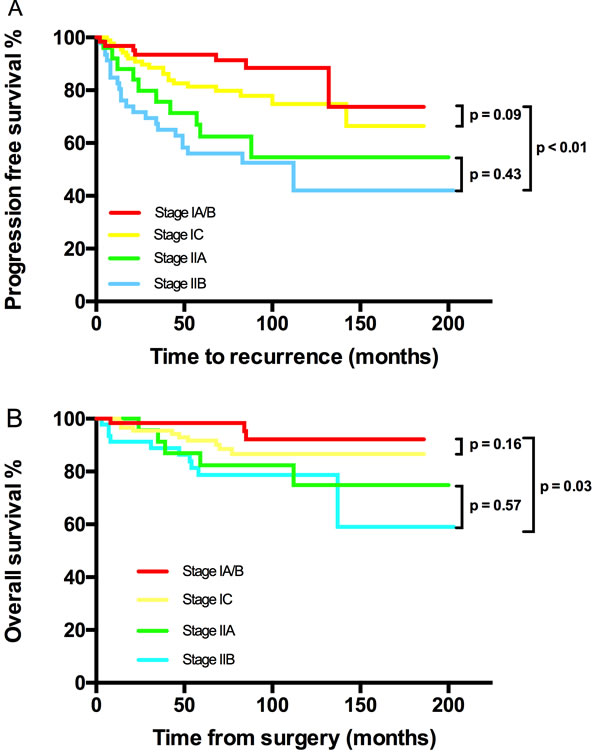 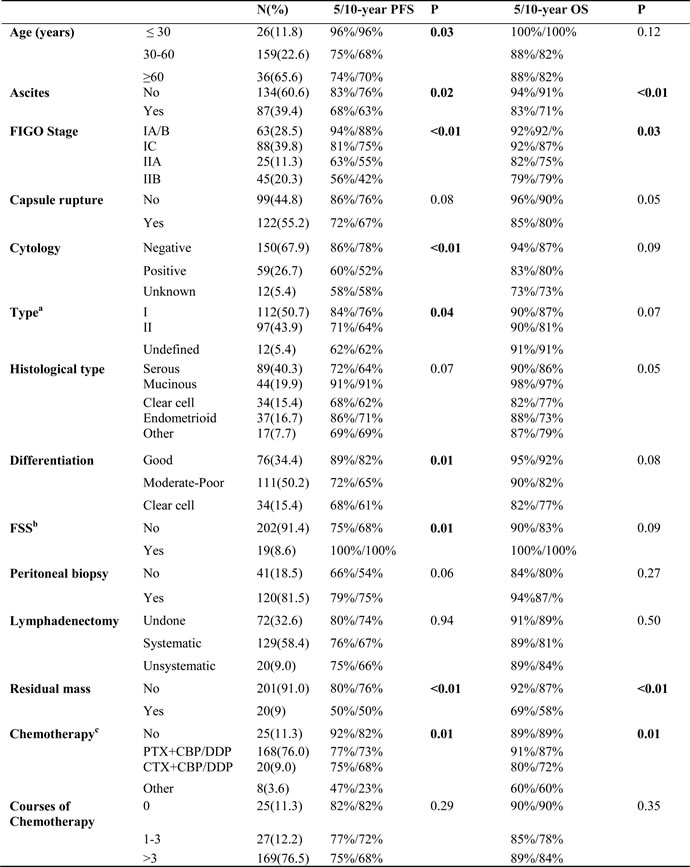 All patients underwent total hysterectomy, bilateral-oophorectomy and omentectomy unless FSS was required. 81.5% patients received peritoneal biopsy and 68% had pelvic lymph node dissection (sampling or systematical removal). We analyzed factors that might influence the completion of peritoneal biopsy and lymphadenectomy. Stage and tumor capsule penetration/rupture did not reveal correlation; nevertheless, greater age and positive peritoneal cytology increased the rate of pelvic lymphadenectomy (P = 0.03 and P = 0.01 respectively). Optimal cytoreductive surgery (residual mass < 1cm) was achieved in 97.5% patients. Furthermore, 201 (91.0%) patients were left with macro-invisible implants after the dissection. Notably, 15 stage IA and 2 stage IC3 patients underwent FSS; and 11 of them received at least 3 cycles of adjuvant chemotherapy. After a minimal 59-month follow-up, no recurrence was observed amongst FSS patients. 89% patients were administrated adjuvant chemotherapy. Among all 25 patients (23 stage IA and 2 stage 1C) exempted from chemotherapy, no clear cell type and grade 3 tumor was identified. 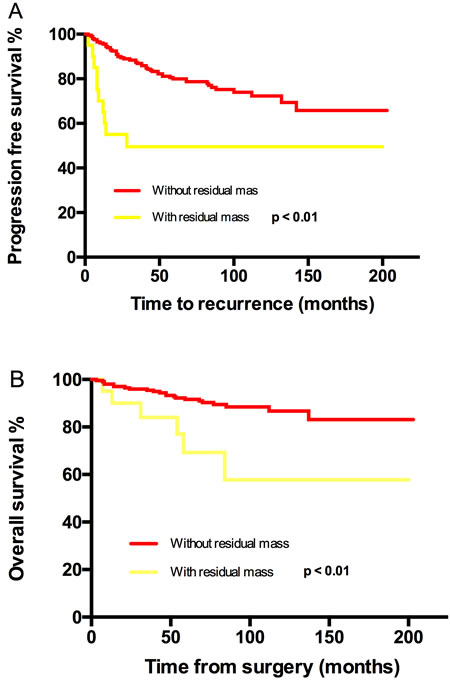 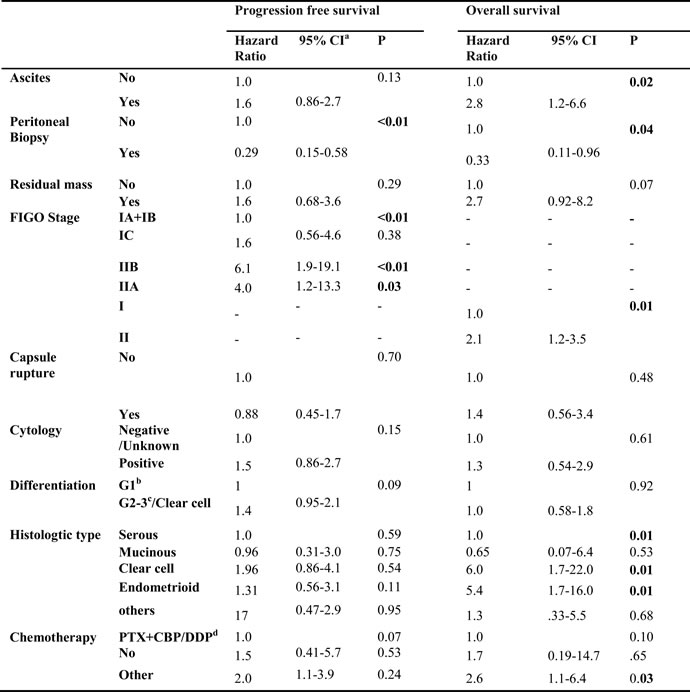 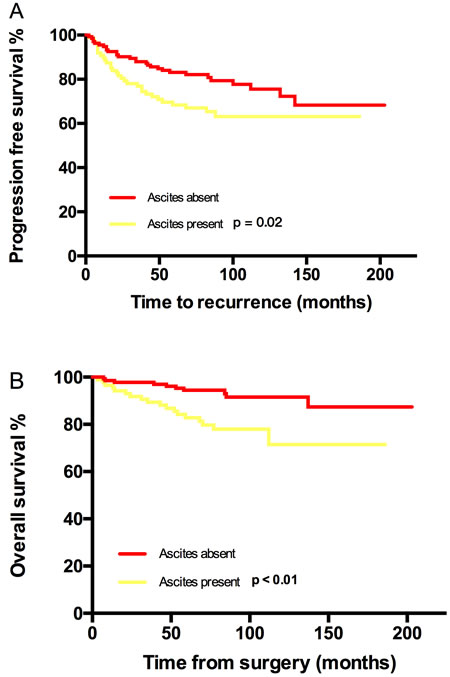 Study on prognosis of early stage EOC is sufficient because it is less common and requires longer follow-up period than advanced-stage counterpart. A limit number of researches has been carried since the FIGO staging system updated in 2014. A dualistic type I/II model of ovarian carcinogenesis has been proposed in recent years, but the prognostic role of this model in early-stage EOC is still unclear. With respects to these progresses, we investigated early stage EOC patients in our institution with long-term follow-ups.

In our study, tumor stage was the most prominent independent factor for PFS and OS. The 5-year/10-year PFS were 86.5%/80.7% for stage I and 57.7%/48.2% for stage II (P < 0.01) . Correspondingly, a study including 114 patients who received primary surgery and first-line chemotherapy demonstrated 85% and 44% 5-year PFS for stage I and stage II EOC patients respectively [11]. Another similar large scale clinical trial reported PFS rates of 82% and 67% for women diagnosed with FIGO stage I and stage II disease respectively [12]. It is noticeable that women with a stage II disease had an obvious lower progression-free survival rate compared with stage I in most studies. Additionally, in our study, the 5-year/10-year OS were 94.5%/89.1% and 79.6%/74.9% for stage I and II respectively (P = 0.01). A study in which 457 early-stage EOC patients received at least 3 cycles chemo therapeutic agents after primary surgery, the calculated probability of survival was 5 years at 84% (stage I) and 73% (stage II) [12]. Another similar clinical study had 5 years OS of 88.8% and 78.9% for stage I and stage II respectively [13]. Several studies reported 5-year OS ranging from 79%-85% in stage I patients who received various adjuvant chemotherapy [14-16]. The discrepancies of reported overall survival rates contributed in part to different baseline characteristics and treatment for these studies. Still, compared with other studies, the overall survival rates in our study were optimistic. In our institution, maximum effort was exerted to remove all metastasis after recurrence by a flexible combination of chemotherapy and multi-disciplinary cytoreductive surgery. We assumed that these partially explain the generally favorable overall survival in our patients. We did not reveal statistical differences for both PFS and OS within stage I and within stage II; it could partly be due to the small event numbers in our study. The stage was revealed as an independent prognostic factor in our investigation. Contrarily, some authors indicated that stage was not influential if optimal treatments were administrated in early stage patients [17]. The latest FIGO staging criteria further classified stage IC, stressing the influences of surgical tumor spill (stage IC1), tumor capsule rupture before surgery or tumor on ovarian surface (stage IC2), and positive ascites or peritoneal washings (stage IC3). However, significant differences between 5-year/10-year PFS (IC1 vs IC2 vs IC3, 70%/70% vs 85%/78% vs 89%/81%, P = 0.46) and 5-year/10-year OS (IC1 vs IC2 vs IC3, 85%/78%, 98%/91%, 90%/90%, P = 0.34) among IC subgroups were not distinguished in our study. Similarly, a meta-analysis of suggested that stage IC had a similar outcome as stage IB disease [18]. Additionally, both tumor rupture and positive cytology showed significant or marginal P values on univariate analysis but not on multivariate analysis in our study, indicating that the effects of tumor rupture and positive cytology may be reduced if appropriate treatments exist. Similar conclusion was draw by a meta-analysis conducted by Kim et al [19].

Involvement of pelvic nodes have been reported to occur in 8-15% and of para-aortic nodes in 5-24% of patients with implants macro-optically confined to ovaries [20-22]. Although Lymphadenectomy could increase the accuracy of staging and reduce the rate of metastasis, it was not a standard procedure at the start. Lymphatic dissection did not improve the prognosis in our study, though, which was consistent with some other studies [23]. We assumed that this is primarily because patients in our study all had negative lymph nodes, thus the importance of lymph dissection was undervalued. A study suggested that benefit of lymphadenectomy in early-stage EOC was more prominent for tumors with poor differentiation [24]. On the contrary, peritoneal biopsy was shown to be an independent factor for both PFS and OS. It is rational to speculate that positive peritoneal biopsy upgrades some stage I patients to stage II. The improved accuracy of staging might increase overall survival by prompting postoperative chemotherapy [25]. Notably, 14 out of 19 FSS patients did not have completed staging surgery because the intraoperative frozen pathology reports were negative; 8 patients were not given chemotherapy. None of FSS patients were reported recurrent. On one hand, our study suggested the significance of completion of staging surgery; on the other hand, we supported that FSS with or without chemotherapy might be a safe option for selected patients.

Clear cell ovarian cancer is regarded as a poorer subtype which requires adjuvant chemotherapy in recent clinical practic [26]. Our study did not reveal the distribution of histology has a prognostic effect. When we separately analyzed the four main histologic subtypes by univariate survival analysis, the prognosis of clear cell type was not significantly inferior to the non-clear cell type’s; a trend towards poorer outcomes could be shown, though. Surprisingly, the mucinous type neoplasm showed a declined rate of recurrence and death, but, the prognostic advantage of mucinous type did not maintain in the cox regression. Further analysis suggested that the mucinous group is correlated with well-differentiation and earlier stage in our study. Therefore, the prognostic advantage of mucinous type is more likely the results from the differentiation and grade. Some previous studies also reported relatively good prognoses for early stage mucinous cancer [4, 27]. Type I ovarian cancers are mostly diagnosed at early stage and typically indolent. Our study supported the observation that the type I ovarian cancer has a better clinical course [28-29]. However, type I was not a significant factor in the cox-regression model.

The main limitation of this study is the heterogeneity among patients. Treatment during the 1999-2005 period in our institution has improved in terms of operation and chemotherapy, but, not all patients underwent completed staging surgery, thus some of them might be under-graded. 12 cased missed cytology exam and accurate staging for them became impossible. The paclitaxel plus platinum regiment was not commonly administrated before 2002. However, the outcomes of our study confirmed the good prognosis of early stage ovarian cancer, suggesting clinical importance of some controversial factors. Further prospective studies regarding these factors are required to tailor the treatment strategy for early stage EOC patients.

All charts of early stage EOC patients treated at Peking Union Medical College, Cancer Institute during the period 1999 to 2010 were reviewed. The statuses of patients were obtained by telephone follow-up and records of the out-patients department. This analysis had appropriate IRB approval. Patients were surgically and pathologically staged by the FIGO staging system (2014). Patients with ovarian borderline tumors, concurrent or previous malignant disease, or disease of stage II or higher were excluded. All patients were untreated before surgery.

The main data collected in this study included patient characteristics at the diagnosis, detailed surgical and pathological report and postoperative treatment. Peritoneal cytology exams were performed using ascites or peritoneal washing. The role of systematic pelvic and para-aortic lymphadenectomy was not well established for early stage EOC during the studied time. Para-aortic nodes were not routinely dissected in our institution before 2005 and were sampled only when suspected lymphatic metastasis was presented. Systematic pelvic lymphadenectomy refers to a bilateral removal of lymph nodes around common iliac vessels, external iliac vessels, internal iliac vessels, and obturator fossa. For selected stage I patients, fertility preservation surgeries were adopted. Postoperative chemotherapy was administrated depending on high-risk factors and patient preference. Only after 2002 was platinum-based (cisplatin or carboplatin) chemotherapy used as first-line medication in our institution. Type I EOC is composed of low-grade serous tumor, low-grade endometrioid tumor, clear cell tumor, and mucinous tumor; its high-grade tumors are type II [28]. Recurrence was diagnosed by positive imaging examination with or without elevated CA-125; it was further confirmed by either exploratory surgery or chemotherapy reaction.

Overall survival (OS) was interpreted as the date from surgery to the time of death from any cause or the date of the last follow-up. Progression free survival (PFS) was calculated as the time from initial treatment to the first sign of relapse or the date of death. T tests and chi-square test were performed to compare values and proportions between groups respectively. Survival curves were depicted using the Kaplan Meier method. The survival functions of different factors were analyzed with the log-rank test and Cox regression models. P < 0.05 for a bilateral test was considered statistically significant. Analysis was performed using the SPSS 20.0 software.

All Authors declare no conflicts of interest.