Background: The aim of this study was to assess the prognostic value for NSCLC patients who were scheduled to receive lung cancer radical resection.

Methods: In this cohort study (Dec.2014-Feb.2016), patients with non-small cell lung cancer (NSCLC) who underwent radical lung cancer thoracotomy were enrolled and accessed at postoperative complications, one-year overall survival (OS) and relapse-free survival (RFS). The preoperative PLR and NLR of all patients were calculated based on preoperative complete blood counts. Univariate and multivariate Cox regression analyses were performed to determine the associations of PLR and NLR with OS and RFS.

In lung cancer radical thoracotomy, the preoperative immune status has a close relationship with clinical outcomes according to recent studies [4, 5]. Besides, accumulating evidence has shown that the development and progression of tumor were associated with systemic inflammation because a cross-talk between inflammation and cancer might occur during perioperative period [6, 7]. As the conceptual tumor develops over last decade, evading immune destruction has become a cancer progress hallmark [6]. Systemic inflammatory response plays an important role in cancer development or progression but different inflammation-based indices account for different type of cancer [8, 9]. Theoretically, inflammatory status should convey valuable information of lung cancer development or progression but unfortunately most specific inflammatory factors are not accessible before surgery and some are only available as research tools.

Preoperative platelet to lymphocyte ratio (PLR) and neutrophil to lymphocyte ratio (NLR) are two simply and widely available markers to reflect systemic inflammation status [10]. These two markers have been shown to be prognostic for several cancer types such as gastric, colorectal, liver and pancreatic cancers [9, 11-13]. Increased circulating platelets may contribute to tumor cell emboli and finally accelerate the course of tumor progression. Surgery promotes the formation of platelet clots around tumor cell emboli, thereby impairing NK cell-mediated tumor cell clearance, whereas perioperative anticoagulation attenuates this effect [14]. Preoperative high NLR relate to increased neutrophil-dependent inflammation, and reduced lymphocyte-mediated tumor response. Neutrophils may be recruited to lung carcinomas to enhance the invasive and metastatic potential of lung cancer cells [15]. An excess of neutrophil elastase is significantly associated with lung cancer risk [16]. Moreover, neutrophils can favor tumor development and inhibit the activity of lymphocytes and other immune cells. All the factors mentioned above is closely related to prognosis of lung cancer radical surgery. However, few prospective studies have investigated the association between preoperative PLR or NLR level and NSCLC clinical outcomes including postoperative pulmonary complications and one-year overall survival. Therefore, we conducted a prospective observational study to investigate the relationship between PLR or NLR and early clinical outcomes or one-year survival in NSCLC patients after lung cancer radical surgery.

The demographic and clinical characteristics of study population are summarized in Table 1. Between December 2014 and February 2016, a total of 435 patients were screened of whom 186 were enrolled finally and 174 (95.38%) were confirmed with NSCLC based on postoperative pathology. The mean age of the 174 patients was 59.02 years (SD 11.33) with 122 (70.1%) male patients. The most common initial clinical symptom was cough and expectoration (43.1%). Almost a quarter of patients were found lung cancer through health examination without any clinical symptom. Only 20 percent people had adjuvant therapy before surgery.

Data are presented as n(%) or mean ± standard differences (SD).

Association between the PLR or NLR and clinicopathological characteristics

Table 2: The relationship between PLR, NLR and clinicopathological characteristics

*P < 0.05 is significant. Data are presented as n(%) or mean±standard differences. 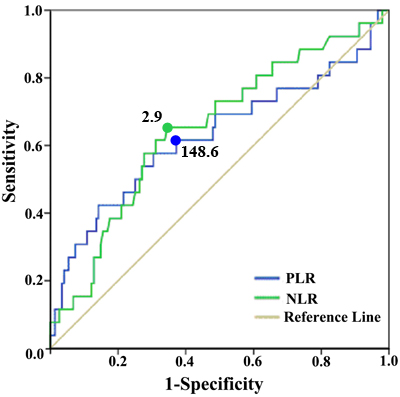 Association between the PLR or NLR and postoperative clinical outcomes

Table 3: The relationship between PLR, NLR and postoperative complications

Data are presented as n (%) or mean ± standard differences.

Data are compared by χ2 test or # by Fisher’s exact test; & By student t test

Association of the PLR and NLR with survival 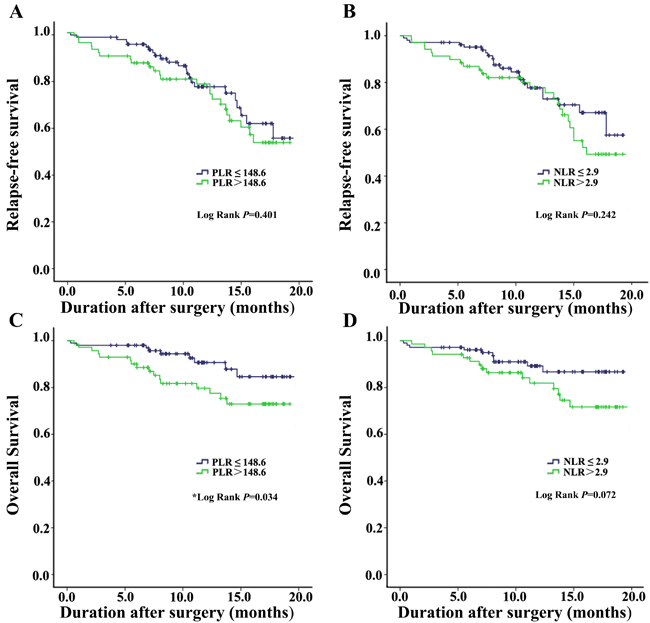 Table 4: univariate Cox regression analysis for PLR and NLR of RFS and OS

Table 5: multivariate Cox regression analysis for PLR and NLR of RFS and OS

The preoperative PLR and NLR are simply, inexpensively and widely available markers to reflect systemic inflammation status [10, 17, 18]. Several recent studies have demonstrated that preoperative inflammation state is associated with a worse postoperative outcome after surgery [19-21]. Our study showed that both preoperative PLR and NLR have a positive correlation with the PPCs particularly pneumonia and atelectasis in NSCLC patients undergoing radical surgery. As immune cells, platelets can initiate and accelerate many vascular inflammatory conditions [22, 23]. It may contribute to the ischemia-reperfusion injury induced by one lung ventilation and surgical injury. Previous study also has the similar result that preoperative thrombocytosis is associated with an increased risk of major postoperative complication [20]. Our study confirms these findings and further defines the nature of the association. We demonstrated that preoperative elevated PLR was independently associated with the development of postoperative pulmonary complication in patients with radical lung cancer surgery, but not associated with the wound healing condition.

The secondary objective of our study is to evaluate the prognostic effect of PLR and NLR on OS and RFS. We observed that an increased preoperative PLR was significantly associated with a higher one-year overall survival of patients with NSCLC. The same trend was observed for NLR, although without statistical differences. The insufficiency of sample and short follow-up period may account for this result. A meta-analysis demonstrated PLR could act as a significant biomarker in the prognosis of various cancers included lung cancer [27]. Our findings are in agreement with these studies. The mechanisms behind these phenomena are not clear and it may involve many aspects. It is believed that platelets can influence multistep development of tumors [22]. A clinical research of 619 patients with epithelial ovarian cancer indicated that paraneoplastic thrombocytosis fuels tumor growth [28]. As for the relationship between high NLR and worse OS, neutrophils can favor tumor development and inhibit the activity of lymphocytes and other immune cells. Neutrophils are involved in tumor progression of non-small cell lung cancer [29]. The exact mechanisms behind the prognostic implications of an elevated NLR remain to be elucidated.

Moreover, we aim to provide a novel indicator for clinicians to efficiently estimate the optimal time course for surgical treatment of NSCLC patients. The peripheral blood count test is routinely performed in all patients. The preoperative PLR and NLR is easy to obtain and come with no extra costs for patients attempt to have a radical lung cancer surgery. It can be used for risk stratiﬁcation of PPCs and postoperative long-term outcome of NSCLC patients in clinical trials and clinical practices.

Our study has several limitations. First, this study was performed in a single center, which might limit the generalizability of our observation to others. Second, the sample size of our study is small. Therefore, the risk of a type 2 error cannot be excluded. Third, our study included patients with all stage (I-IV) because of the uncertainty of the tumour stage before surgery. It increased the inhomogeneity of our study population. However, PLR and NLR were distributed balance among pathological stage. Last, the postoperative clinical outcomes were only followed up for one year. However, the trend of OS was still available.

To avoid the influence of surgical techniques, all surgeries were performed by one same group of surgeons. As for one lung ventilation (OLV) strategy, the tidal volume was set at 6 to 8mL/kg and positive end-expiratory pressure (PEEP) was 6 to 8 cmH2O under a volume-controlled mode. Recruitment maneuver composed of a continuous positive airway pressure of 30 cmH2O for 30 seconds was repeated every 30 minute before and after OLV to avoid atelectasis [30]. A relative strict fluid protocol was performed during the whole surgery [31]. After surgery, all patients were transferred to intension care unit (ICU) with tracheal tube and use the same analgesia pump for postoperative pain relief.

The basic demographic data and clinical characteristics of all patients were collected. The postoperative clinical course of each patient was carefully observed and recorded daily till discharged or 30 days after surgery. Data of blood counts within 7 days before the surgery were recorded. The blood specimen were collected through veinpuncture carried out by experienced nurses[32]. The NLR was defined as the absolute neutrophil count divided by the absolute lymphocyte count and the PLR referred to the absolute platelets count divided by the absolute lymphocyte count. Moreover, a chest computed tomography (CT) scan need to be done before discharge.

Data collection was performed using Microsoft Office Excel and all statistical analysis was carried out with IBM SPSS Statistics for Windows, version 21.0 (IBM Corp, USA). Continuous data with a normal distribution was presented as mean ± standard deviation and median (inter-quartile range, IOR) when variables were non-normal distributions. Categorical data was described by frequency and percentage. Normality of data was tested through Kolmogorov-Smirnov one-sample test. Student’s t test or one-way ANOVA (Analysis of Variance) was used for continuous variables and Fisher’s exact test or χ2 test was used for comparison of categorical data separately.

The ROC curve analysis was carried out to assess the prognostic ability of PLR, NLR. The optimal cut-off value for NLR and PLR were also available using the ROC curve. The optimal cutoff values were identified as the values that maximize the Youden index (sensitivity + specificity − 1) [35]. Survival curves were estimated with the Kaplan-Meier method. Association between the factors and prognosis were examined with univariate and multivariate Cox regression models. In all test, a P-values of < 0.05 (two-tailed) was considered statistically significant.

This study was funded by the grants form National Natural Science Foundation of China (30571785; 30972862); Sichuan Projects of China (2012FZ0121); and Techpool Research Fund. The authors would like to thank Dr. Haiping Wang for her help on data statistics.