Background: Gliomas are highly malignant with a poor prognosis. Studies have reported that DNA repair genes influence risk for glioma, but its relationship with prognosis is unclear. In this study, we want to explore the relationship between DNA repair genes (XRCC3, XRCC4 and XRCC5) and prognosis of astrocytoma in the Chinese Han population.

Materials and Methods: 160 astrocytoma cases were recruited in our study. Survival probabilities were estimated by using Kaplan–Meier analysis, and significant differences were analyzed by using the log-rank test. Cox proportional hazards models were used to analyze the associations between genotypes with astrocytoma survival. Hazard ratios (HR) and 95% confidence intervals (CI) were estimated using multivariable models. All tests were two-sided and p < 0.05 was considered to be significant.

Astrocytoma is a tumor composed of astrocytes, which is the most common type of neural epithelial tumor [1]. Astrocytoma is an invasive growth tumor, the majority of tumor possible recurrence after surgical resection, and the recurrence of the tumor can evolve into anaplastic astrocytoma or pleomorphic glioblastoma. In recent years, the world's major cancer research center has been committed to the study of astrocytoma prognosis of the scholars dedicate themselves to looking for more effective treatment method all around the world. At present, we have no uniform standard about the prognosis and treatment of glioma in domestic and foreign.

The previous literature has recorded the main method to evaluate the prognosis and treatment: 1, CT and other imaging results as a determination of indicators, mainly through a period of time after treatment to determine the change in tumor volume; 2, Survival rate and survival time were used as indicators: survival rate of 1 year, 3 year and 5 year survival rate of tumor patients were observed and survival curves were drawn. The curative effect and prognosis of different treatment groups were observed; 3, the change of the functional status of the patients before and after the treatment was judged [2]. The factors which affect the prognosis of astrocytoma are complicated including age, gender, tumor size, pathological grading, surgical resection, postoperative radiotherapy, KPS (Karnofsky performance Status), chemotherapy and other factors [3-5].

Characteristics of the patients

No significant association was found between the prognosis of astrocytomas and selected demographic characteristics such as sex, age, WHO classification, and radiotherapy.

We further explored the role of genetic polymorphisms in the prognosis of astrocytoma, significant association was observed in our study (Table 3). Kaplan-Meier survival curves graphically also emphasize that the “A/A” genotype of rs9288516 in XRCC5 (X-ray cross-complementing 5) has effect on OS in astrocytomas patients (1-year survival of TT vs. AA: 25% vs.17.9%), which also shorten the astrocytoma patient’s survival time, and astrocytoma patients with poor prognosis (HR=1.69) (Figure 1). 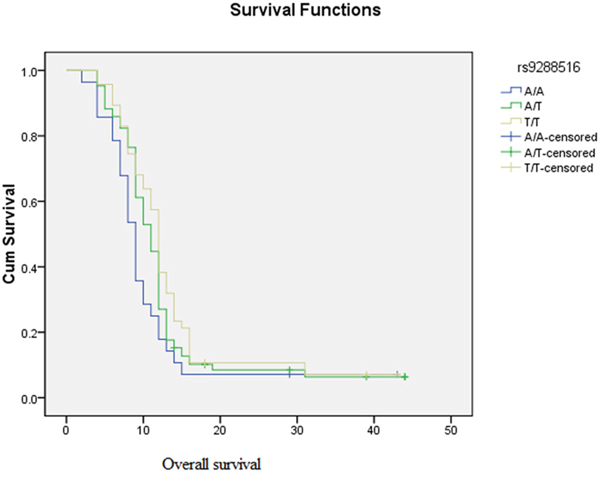 Figure 1: Kaplan–Meier analysis of overall survival is shown for different genotypes of rs9288516 of XRCC5.

Table 3: Analysis of the effect of genetic polymorphisms on the overall survival of astrocytoma by Univariate cox regression analysis

Univariate analysis found that extent of surgical resection and chemotherapy affect the prognosis of astrocytoma patients. Therefore, Multivariate analysis, adjusted for extent of surgical resection and chemotherapy, found that unfavorable genotypes (the “A/A” genotype of rs9288516 in XRCC5) had significant outcomes (HR: 1.67, 95% CI: 1.02 - 2.72, p = 0.042), which were displayed in Table 4.

Table 4: Analysis of the effect of genetic polymorphisms on the prognostic of astrocytoma by Multivariate cox regression analysis

Even if surgery has achieved good results in the treatment of glioma, possiblity to recur for most tumors, chemotherapy is one of method to inhibit the progression of astrocytoma, while the treatment outcome was poor. The main reason is the existence of drug resistance and blood brain barrier factors and so on. Although the effect is unsatisfactory, there is still a certain function. In our study, we found that the univariate analysis showed that chemotherapy was statistically significant, 1 and 3year survival rate was significantly higher (39.4%, 12.7%) than patients who did not receive chemotherapy (24.1%, 2.7%). Stewart et al. has used the Meta analysis about the effect of chemotherapy for malignant glioma [10]. The results had showed that patient of glioma received chemotherapy, whose 1 years survival rate increased by 6%; 2 years survival rate of glioblastoma increased by 4%, the average survival time was prolonged for 2 months. So, to a certain extent, astrocytoma patient accepted chemotherapy may have positive role.

XRCC5 gene and prognosis of astrocytoma

XRCC5 (X-ray repair cross-complementing gene 5) is one of the double-strand break repair genes, which plays an important role in non-homologous terminal repair. The Ku80 protein was encoded by the XRCC5, and KU70 protein was encoded by the XRCC6 [13]. KU80 protein and KU70 protein forms a heterodimer (ie: KU protein), heterodimer and DNA-PK catalytic subunit (DNA-PKes) composition of DNA-PK [14]. When the XRCC5 gene mutates, the structure of the encoded Ku80 protein may change, it will cause Ku80 protein and Ku70 protein cannot bind or reduce the ability to bind, and will affect the heterodimer formation, so that the ability to mobilize DNA-PKes decreased, DNA-PK cannot play a normal role [15]. The non-homologous end repair function cannot be carried out, which may lead to the occurrence of tumor.

It has been recently reported that a significant increase in XRCC5 expression in hepatocellular carcinoma mice can prevent liver tumors induced by DNA damage [16]. However, the role of the XRCC5 gene in astrocytomas has not been studied. Functional prediction of rs9288516 using software FASTSNP, suggested that rs9288516 might cause a change in the potential binding sites of transcription factors, which may result in instability of XRCC5 messenger RNA transcripts, resulting in dysfunction of XRCC5 expression and ultimately lead to cancer [17].

In our study, we regarded “A/A” of rs9288516 as an increased factor, which was just associated with prognostic effect of astrocytoma in Chinese patients. Compared with the previous studies, we found that XRCC5 gene is not a risk factor, can be used as a negative factor with prognostic effect of glioma. Our finding suggested that this gene may play a different role in complex diseases. In further studies, we should investigate the different mechanisms of XRCC5 gene in different diseases. So that it is worth to pay more attention to explore the role of XRCC5 gene in variety cancers.

Although we have found that the XRCC5 gene may affect the prognosis of astrocytoma patients, there are still some problems that need to be improved in this study. For example, our sample size is relatively small, we should expand the sample in-depth study. Sometimes, individuals may carry risk alleles that will affect the outcome to the extent. So that the interactions effect of gene-environment should be explore in the furture.

In conclusion, we investigated an association between XRCC3, XRCC4 and XRCC5 gene polymorphism and the risk and prognosis of astrocytoma in Chinese Han population. We have found evidence suggesting that the genotypes of XRCC5 may be correlated with increased risk and poor prognosis for astrocytoma. However, the exact mechanism of how the polymorphisms in the related the gene regulate astrocytoma prognosis needs to be further investigated.

All astrocytoma patients were Chinese Han who were followed up from December 2010 to April 2014, recruited from the department of Neurosurgery at Tangdu Hospital, Xian City, China. A total of 160 subjects were newly-diagnosed with pathologically verified astrocytoma in this study. Clinical information was collected and regularly updated for the patients with glioma through follow-up and questionnaires. These data include date of age, gender, date of diagnosis of primary tumor, date of surgical resection and surgery extent, treatment with chemotherapy and/or radiotherapy for primary and/or recurrent lesions, date of last follow-up, and status of patient (living/deceased) at the time of last follow-up. We excluded patients with the secondary astrocytoma from a primary cancer and patients received cetuximab at any step as part of their treatment were also excluded.

All participants were informed of the procedures and purpose of the study, and each participant provided signed informed consent forms. The use of samples was approved by the Clinical Research Ethics of Xizang Minzu University and the Tangdu Hospital board.

Selection of SNPs and methods of genotyping

OS was defined as the time from the date of pathologically confirmed to the date of death or last clinical follow-up. PFS was calculated from the date of the pathologically confirmed to the progression of the disease, death without progression, or last clinical follow-up. We computed basic descriptive statistics for age at diagnosis, gender, WHO grade, extent of surgery, radiation therapy, chemotherapy, and frequencies of five SNPs. Survival distributions were estimated by using the Kaplan-Meier method and difference in the survival was tested using the log-rank test. To estimate the association of the five SNPs with PFS and OS in astrocytoma, the HR and 95% CI were calculated by Univariate Cox proportional hazards model. Multivariate Cox model were performed to compute adjusted HR and 95% CI, after adjusting for potential risk factors. All tests were two-sided and p < 0.05 was considered to be significant. All statistics were conducted by SPSS 17.0 (SPSS, Chicago, IL, USA).

This work was funded by the National Natural Science Foundations (No. 81560516) and Major science and technology research projects of Xizang (Tibet) Autonomous Region (2015XZ01G23).