The aim of this study was to test the causal association between circulating transforming growth factor beta 1 (protein: TGF-β1 and coding gene: TGFB1) and hepatocellular carcinoma by choosing TGFB1 gene C-509T polymorphism as an instrument in a Mendelian randomization (MR) meta-analysis. Ten English articles were identified for analysis. Two authors independently assessed each article and abstracted relevant data. Odds ratio (OR) and weighted mean difference (WMD) with 95% confidence interval (CI) were synthesized under a random-effects model. Overall, the association of C-509T polymorphism with hepatocellular carcinoma was negative, but its association with circulating TGF-β1 was statistically significant, with a higher concentration observed in carriers of the -509TT genotype (WMD, 95% CI, P: 1.72, 0.67–2.78, 0.001) and -509TT/-509TC genotypes (WMD, 95% CI, P: 0.98, 0.43–1.53, < 0.001). In subgroup analysis, C-509T polymorphism was significantly associated with hepatocellular carcinoma in population-based studies under homozygous-genotype (OR, 95% CI, P: 1.74, 1.08–2.80, 0.023) and dominant (OR, 95% CI, P: 1.48, 1.01–2.17, 0.047) models. Further MR analysis indicated that per unit increase in circulating TGF-β1 was significantly associated with a 38% (95% CI: 1.03–4.65) and 49% (95% CI: 1.01–6.06) increased risk of hepatocellular carcinoma under homozygous-genotype and dominant models, respectively. Conclusively, based on a MR meta-analysis, our findings suggest that enhanced circulating TGF-β1 is causally associated with an increased risk of hepatocellular carcinoma.

Transforming growth factor beta 1 (TGF-β1) is a polypeptide cytokine that belongs to the transforming growth factor beta super-family [1]. It is widely accepted that TGF-β1 acts as a crucial regulator of cell growth, proliferation, differentiation and apoptosis [2–4]. Epidemiologic studies have observed a significant higher concentration of circulating TGF-β1 in patients with cancer at many sites including the liver than in cancer-free controls [5–7]. It is hence reasonable to assume that elevated circulating TGF-β1 may be causally associated with an increased risk of developing hepatocellular carcinoma [8]. Determining the answer to this assumption is far from an easy proposition, but the introduction of Mendelian randomization (MR) may cast a new light on the cause-and-effect dissection using observational data.

In theory, MR means the usage of a genetic alteration as an instrument to dissect a causal effect of an intermediate phenotype on a disease and importantly this effect is not subject to reverse causation and confounding that often confuse the interpretation of observational findings [9, 10]. An immediate and direct approach for instrument selection revolves around the functional variation of encoded or relevant gene for the intermediate phenotype of interest [11, 12]. In humans, TGF-β1 is encoded by TGFB1 gene (Gene ID: 7040) that is mapped on chromosome 19q13.1 and contains 7 exons. Experimental evidence lends support to the observation that TGFB1 gene is frequently up-regulated in tumor cells and the loss of TGF-β signaling is proposed as a hallmark of carcinogenesis [13–15]. TGFB1 gene is polymorphic in genomic sequences and it incorporates approximate 1700 validated bi-allelic polymorphisms. One of the most widely-evaluated polymorphisms is C-509T (rs1800469) in the promoter region of TGFB1 gene and this polymorphism was reported to be associated with the significant changes of circulating TGF-β1 by many investigators [16, 17]. What’s more, experimental evidence from reporter constructs suggested that expression of TGFB1 gene differed significantly between the -509C allele and the -509T allele, and this difference may be caused by selective activator protein 1 (AP1) recruitment to its promoter [18]. To explore the possible causal association between circulating TGF-β1 and hepatocellular carcinoma, we thereby chose TGFB1 gene C-509T polymorphism as an instrument and conducted a meta-analysis of available published studies under the principles of MR method.

Using the predefined inclusion criteria, 10 out of 86 retrieved articles were qualified for analysis [7, 16, 17, 19–25] and the selection process is schematized in Figure 1. As two articles from within included sub-studies according to the co-infection of hepatitis B and C viruses [16, 17], a total of 12 studies were qualified for the association of TGFB1 gene C-509T polymorphism with hepatocellular carcinoma, involving 2809 patients with hepatocellular carcinoma and 4802 cancer-free controls. The basic characteristics of the 12 qualified studies are shown in Table 1. As for the association of C-509T polymorphism with circulating TGF-β1, there were 4 articles [7, 16, 17, 25] involving 10 independent comparisons and 1986 study subjects. The distributions of circulating TGF-β1 across C-509T genotypes are summarized in Table 2. 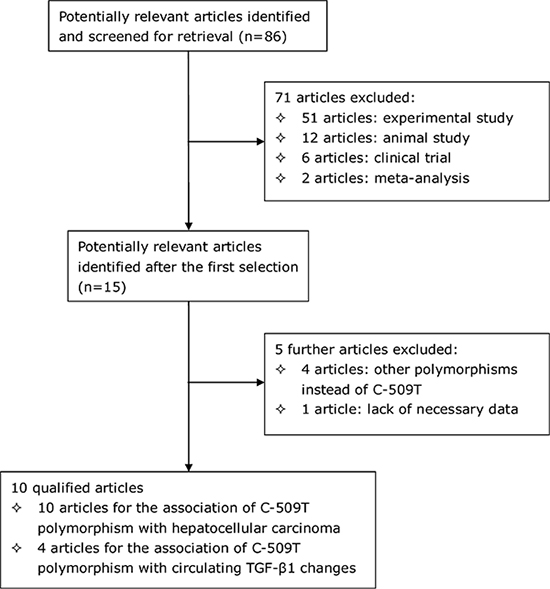 Figure 1: The selection process of qualified articles in this meta-analysis.

Table 1: The baseline characteristics of 12 qualified studies in this meta-analysis

All qualified articles were published from the year 2003 to 2015 and total sample size ranged from 188 to 1624. Of 12 studies, 8 were performed in China (5 in southern China and 3 in northern China), 1 separately in Japan, South Korea, Italy and Egypt. Seven studies collected cancer-free controls from hospitals and five from general populations. The C-509T genotypes were determined by restricted fragment length polymorphism (RFLP) method in 7 studies and by chip-related methods in 5 studies. Eight studies had a total sample size of at least 500 and four studies of less than 500.

In overall analysis, C-509T polymorphism was not significantly associated with hepatocellular carcinoma under four genetic models (Figure 2) and this association was obsessed by significant heterogeneity (I2 > 50%). However, it was unlikely for the existence of publication bias as revealed by Egger’s tests and filled funnel plots (Figure 3). 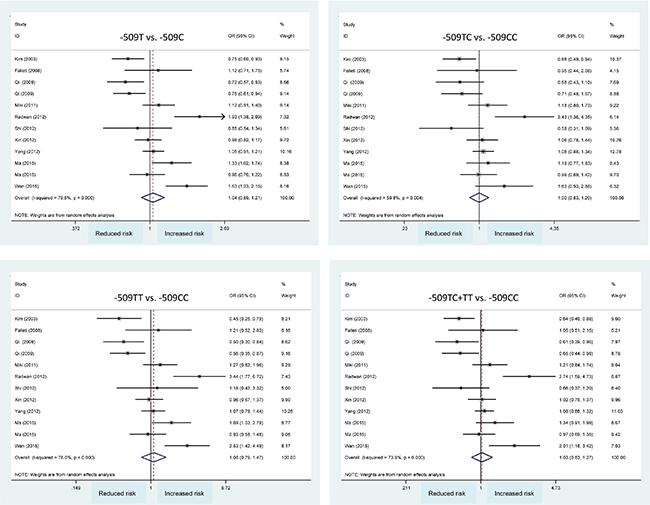 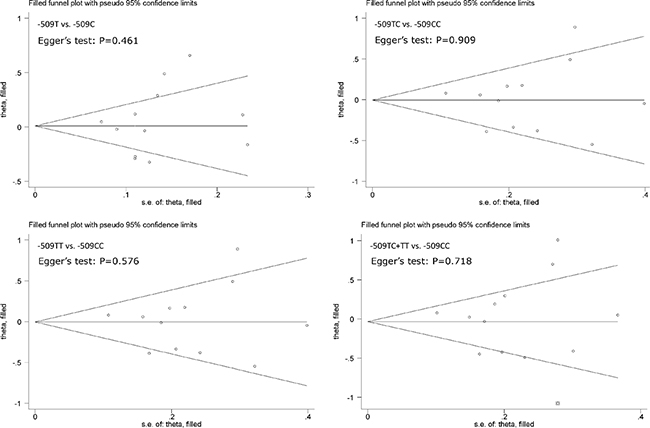 After modeling age, gender and the percentages of hepatitis B and C virus infection in meta-regression analysis, we failed to detect any significance of these confounding factors under four genetic models (P > 0.05). 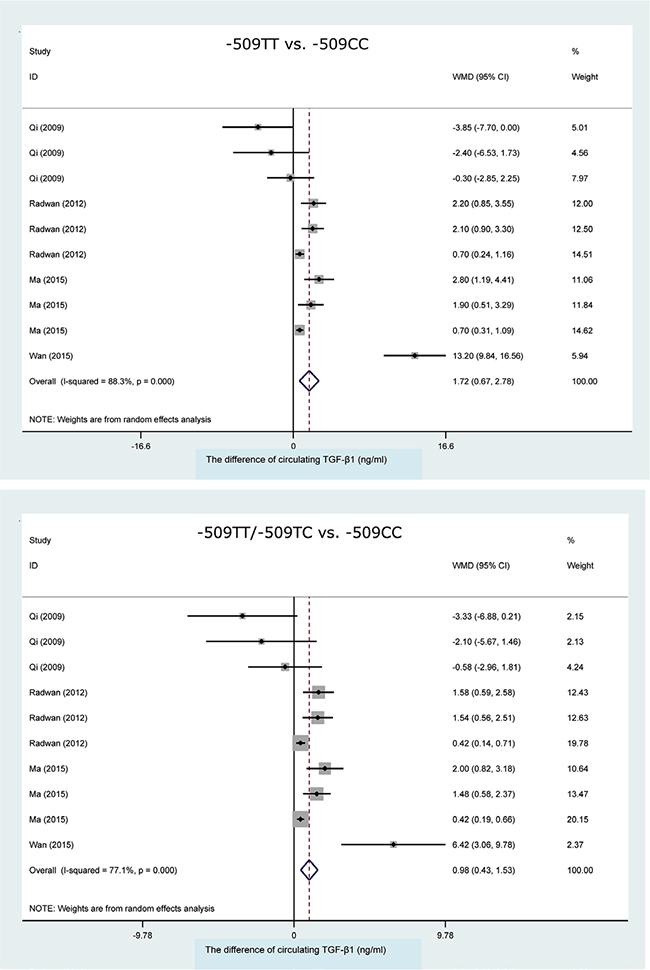 In view of the prerequisites for MR, causal relevance was only estimated in studies with population-based controls under homozygous-genotype and dominant models. Per unit increase in circulating TGF-β1 was significantly and causally associated with a 38% (OR, 95 CI: 1.38, 1.03–4.65) and 49% (OR, 95 CI: 1.49, 1.01–6.06) increased risk of having hepatocellular carcinoma under homozygous-genotype and dominant models, respectively.

Despite the promising results of this study, we must draw special attention to the MR method adopted in this meta-analysis. It is widely believed that testing for a cause-and-effect of a phenotype on a disease by testing an association between a genetic locus and the disease is reasonable and straightforward pending three key assumptions for a genetic locus quantified as an instrument variable, that is, the locus (i) should be robustly associated the phenotype, (ii) should not be associated with confounding factors that may bias the association between the phenotype and the disease and (iii) should exert its impact on the clinical outcome through the specific phenotype [36]. For the first assumption, the biological plausibility of TGFB1 gene C-509T polymorphism is well defined, as this polymorphism is reported to account for a nearly twofold difference in circulating TGF-β1, which might be due to transcriptional suppression by the binding of activator protein 1 to this locus [18]. In addition, as this meta-analysis is not based on individual participant data and some necessary data are missing, it is beyond our ability to test the justification of the last two assumptions for the genetic instrument selected. Furthermore, the presence of linkage disequilibrium, genetic heterogeneity, pleiotropy, population stratification, canalization, or lack of knowledge about the confounding factors deserves special consideration when interpreting the causal effect in MR analysis [9, 37].

Finally, when interpreting these finding, several potential limitations of this MR meta-analysis should be considered. The first limitation was the retrieval of only English-language articles, which might result in a selection bias. However, this bias is unlikely to affect the validity of our findings because our Egger’s tests and filled funnel plots suggested a low probability of publication bias. The second limitation might be inadequate study power in view of limited qualified studies and small sample sizes involved and this limitation became more obvious in some subgroup analyses. The third limitation was that although statistical heterogeneity was improved in some subgroups, other sources of clinical heterogeneity remained to be resolved. The fourth limitation lied in the incapability to justify some prerequisites of the MR method due to the unavailability of original data from each qualified study. The fifth limitation was that only one promoter polymorphism in TGFB1 gene was selected as an instrument and it is encouraging to see whether this polymorphism in combination with another functional locus will enhance risk prediction for hepatocellular carcinoma.

In conclusion, our findings provide evidence for the significant association of TGFB1 gene C-509T polymorphism with hepatocellular carcinoma in population-based studies and circulating TGF-β1 changes, and importantly enhanced circulating TGF-β1 was suggested to be causally associated with an increased risk of hepatocellular carcinoma by choosing TGFB1 gene C-509T polymorphism as an instrument, the association warranting further validation in large, independent studies. Considering the ubiquity of genetic heterogeneity and in view of sample sizes involved, our findings should be viewed to be preliminary until further confirmation in future larger, well-designed studies.

The Medline (http://www.ncbi.nlm.nih.gov/pubmed/) and Embase (http://store.elsevier.com/embase) were searched to identify articles that examined the association of TGFB1 gene C-509T polymorphism with hepatocellular carcinoma and/or TGF-β1 changes in circulation before July 2016. Key terms included (“hepatocellular carcinoma” or “hepatocellular cancer” or “liver cancer” in title) and (“transforming growth factor beta” or “TGFB” or “TGFbeta” or “TGF-beta” in abstract) and (“genotype” or “allele” or “polymorphism” or “variant” or “mutation” in abstract). All retrieved articles were managed by the EndNote X7 software (Thomson Reuters EndNote). For major reviews, meta-analyses and original investigations, we also checked the bibliographies to avoid possible missing articles. The implementation of this meta-analysis abides by the guidelines in the Preferred Reporting Items for Systematic Reviews and Meta-analyses (PRISMA) statement [38].

Articles that examined the association of TGFB1 gene C-509T polymorphism with hepatocellular carcinoma and/or TGF-β1 changes in circulation were included pending sufficient information to deduct odds ratio (OR) and weighted mean difference (WMD), as well as their 95% confidence interval (95% CI). Moreover, only articles published in English language were taken into account. Additionally, source of study participants must be described clearly in each study.

From each article, necessary data were collected and typed into a standard form separately by two authors (Wei-Qun LU and Ji-Liang QIU) and after cross-checking, disagreements were resolved by consensus. Necessary data incorporated the first author’s surname name, year of publication, country, source of controls, genotyping platform, matching status, sample size, the genotype counts of TGFB1 gene C-509T polymorphism or/and the mean and standard deviation values of circulating TGF-β1 across C-509T three genotypes and if available age, gender composition and the percentages of hepatitis B and C virus infection.

The risk prediction of TGFB1 gene C-509T polymorphism for hepatocellular carcinoma was measured by the ORs with 95% CIs in a random-effects model using the DerSimonian/Laird method [39]. The mean changes of circulating TGF-β1 across genotypes were measured by the WMDs with 95% CIs.

Statistical heterogeneity between studies was measured by inconsistency index (I2). The I2 represents the percentage of observed diversity resulting from heterogeneity rather than from chance. Higgins et al suggested an I2 of 50% or over as significant heterogeneity [40]. Besides statistical heterogeneity, clinical evidence of heterogeneity is also no less important and it is usually evaluated by subgroup analysis and meta-regression analysis. In this meta-analysis, subgroup analysis was performed according to country, source of controls, genotype method and sample size, respectively. Meta-regression analysis was performed by modeling age, gender and the percentages of hepatitis B and C virus infection individually.

It is widely accepted that any study with a significant and positive result tends to receive more favorable publication decisions than the equally well-conducted study with a nonsignificant and negative result, the phenomenon known as publication bias [41]. Several criteria have been developed to quantify the probability of publication bias and in this meta-analysis Egger’s test and filled funnel plot were adopted to judge this bias. The significance level of Egger’s test is set at 10%, a commonly held cutoff value.