miR-186 affects the proliferation, invasion and migration of human gastric cancer by inhibition of Twist1

Although there is an obvious decrease in the prevalence of gastric cancer, gastric cancer still acts as the second one in the most common malignancies in the real world, especially in China [1, 2]. To our pity, the five years overall survival rate of gastric cancer patients undergoing surgical operation remains to be not satisfying. To date, the common metastasis and recurrence have been reported as the main rationales, which affect the long-term survival of postoperative gastric cancer patients [3]. In addition, it is very difficult to diagnose gastric carcinoma at an early stage for some patients due to no clinical manifestations. Ergo, it is essential to figure out the pathogenesis and molecular mechanisms of gastric cancer to facilitate the clinical treatment of patients with GC.

In recent years, a large quantity of oncogenes and tumor suppressors has been reported to be involved in the regulation of the development of GC. In addition to putative protein-coding genes, non-coding miRNAs were reported as an extremely conserved RNA sequences, including 20–27 nucleotides. According to recent studies, miRNAs have the capacity of regulating the gene expression by targeting the 3'-untranslated regions (UTR) of related mRNAs in the development of different tumors [4, 5]. miRNAs can control the gene expression based on different levels, involving the modification of chromatin, gene transcription, proliferation, invasion and migration [6–8]. Increasing studies identified that miR-186 can be found to be down-/up-regulated in diverse cancer tissues. At the same time, it has been reported that miR-186 has a wide role in regulation of some functions involving suppression of cancer cell proliferation and inhibition of organ metastasis of different cancers. As reported, the expression of miR-186 was found to be down-regulated in some cancers, inducing prostate cancer, colorectal neuroendocrine tumors, ovarian cancer and non-small cell lung cancer [9–12]. However, little is known about the role of miR-186 in the development of GBM.

In view of the importance of miR-186 in the development of GC, we investigated miR-186 as a subject, and observed that miR-186 was obviously down-regulated in GC tissues as compared with their adjacent normal tissues using qRT-PCR analysis. Meanwhile, we also found that ectopic expression of miR-186 could affect cell proliferation, invasion and migration of gastric cancer partially via targeting the expression of Twist1.

The expression of miR-186 and Twist1 in GC samples

Table 1: Correlations of miR-186 and Twist1 with clinicopathological indicators 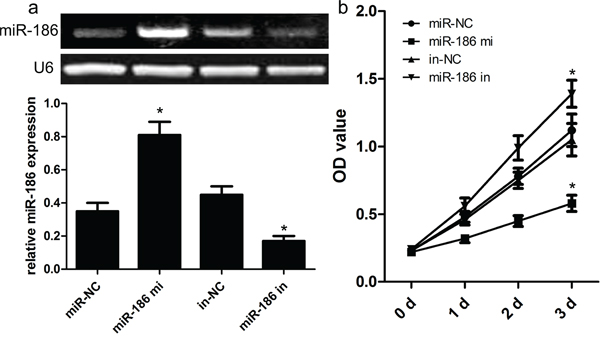 Figure 2: Effect of miR-186 on HGC-27 cell proliferation. a. Relative expression levels of miR-186 in HGC-27 cells transfected with miR-186 mimics and inhibitors was tested by RT-PCR. b. MTT assays showed that miR-186 overexpression had an inhibitory effect on the growth of HGC-27 cells compared with their matched cells. *p<0.001, one-way ANOVA.

Figure 3: Overexpression of miR-186 could inhibit HGC-27 cell invasion and migration. Transwell assays were used to investigate the changes in migratory a. and invasive b. abilities of HGC-27 cells. The number of invasive and migratory cells was significantly decreased due to miR-186 overexpression. *p<0.001, one-way ANOVA.

To explore the molecular mechanisms by which miR-186 medicates the proliferation, invasion and migration, we determined a few candidate target genes of miR-186 using putative online databases. Of these candidates, Twist1 was chosen and exhibited the highest prediction scores because the sequence of Twist1 mRNA had the most complementary sequences with those of miR-186. After that, we performed a luciferase activity assay to identify whether Twist1 genes was indeed targeted by miR-186. In this work, luciferase vectors containing the wild type/mutation type 3’-UTR of Twist1 were constructed, and co-transfected along with the miR-186 mimic/inhibitor into cells. Our findings showed that the expression of miR-186 remarkably decreased the activity of wild type 3’-UTR of Twist1 in a dose-dependent fashion (p<0.001; Figure 4a), however the expression of miR-186 did not change the activity of mutant 3’-UTR of Twist1 (p>0.001; Figure 4b). Taken together, these findings suggested that Twist1 was a direct target for miR-186 in the development of GC.

Figure 4: miR-186 was a direct transcriptional target of Twist1 in HGC-27 cells. The miR-186 mimic inhibited the luciferase activity controlled by wild-type Twist1 -3'-UTR a. but did not affect the luciferase activity controlled by mutant Twist1 -3'-UTR b. in HGC-27 cells. Results shown are the mean ± SD of repeated independent experiments. *p<0.001, compared with control, one-way ANOVA. 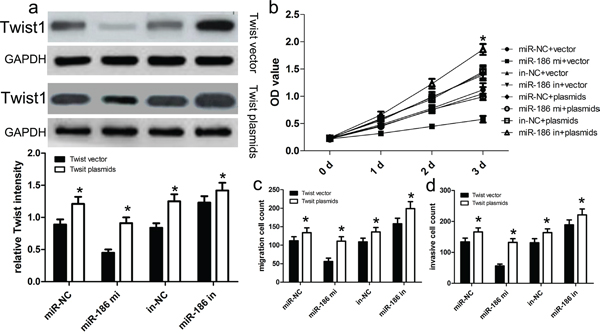 Subsequently, we selected a useful target Twist1 to explore the miR-186-Twist1 pathway. Firstly, Twist1 is a well-known transcription factor in the progression of the epithelial-mesenchymal transition (EMT). Twist1 has been reported to be involved in the de-differentiation of cancer cells, leading to cell invasiveness and migration. Other reports identified that Twist1 expression could enhance the tumor response to radiotherapy. However, the more molecular mechanisms of Twist1 involved in the development of gastric cancer remain unclear. In this work, we used the luciferase-based reporter assay and identified that miR-186 can bind a conservative sequence within the 3’-UTR of Twist1 to partially inhibit the expression of Twist1. After that, we transfected cells with the Twist1 expression vector to restore Twist1 expression in HGC-27 cells, and found that the restoration of Twist1 expression improved the miR-186-inhibited proliferation ability of HGC-27 cells. These findings indicate that Twist1 activated by down-regulation of miR-186 resulted in the proliferation, migration and invasion.

In oncogenesis, tumor-suppressing genes including miRNAs could be effectively silenced using epigenetic approaches [20–23]. In our study, we thought that miR-186 might be epigenetically repressed by histonedemethylase et al. Besides, Twist1 is identified as a target of miR-186, but Twist1 is not the only one that can be targeted by miR-186 for a single miRNA is more likely to regulate thousands or hundreds of mRNAs in oncogenesis. Therefore, it is essential to identify other potential novel targets of miR-186 or Twist1-related miRNAs, which will allow us to understand the deep molecular mechanisms underlying the development and progression of gastric cancer.

In conclusion, we for the first time demonstrated that miR-186 expression is down-regulated in gastric cancer, and overexpression of miR-186 inhibited cell proliferation, invasion and migration partially via regulation of Twist1 expression. Generally, this study provides a new idea that miR-186 may act as a novel target for early diagnosis and treatment of gastric cancer patients. However, the more detailed molecular mechanisms by which miR-186 promoted the development and progression of gastric cancer need further investigation.

90 paired GC and corresponding adjacent nontumorous samples were obtained from patients who underwent surgery at The Second Affiliated Hospital of Dalian Medical University between 2014 and 2015. All cases were confirmed as GC based on histopathological evaluation. The clinicopathological characteristics of the GC patients were summarized. No local or systemic treatment was conducted in these patients before surgery. All collected tissue samples were immediately snap-frozen in liquid nitrogen and stored at -80°C until required. Our study was approved by the Research Ethics Committee of The Second Affiliated Hospital of Dalian Medical University. Written informed consent was obtained from all patients.

Total RNA was extracted from tissues or cells using Trizol reagent (Invitrogen, Carlsbad, CA). 1 μg total RNA was reverse transcribed to cDNA by using a reverse transcription kit for next qRT-PCR assays (Takara, Dalian, China). QRT-PCR assays were performed using SYBR Premix ExTaq II kit (Takara, Dalian China), and the results were normalized to the GAPDH expression level. All the PCR primers used in this study were shown as follows.

The qRT-PCR assays and data collection were performed on ABI 7500, and data were analyzed as threshold cycle values (ΔCt) and then converted to fold changes using the 2−ΔΔCt method.

The Twist1 sequence was synthesized and subcloned into the pcDNA3.1 vector (Invitrogen, Shanghai, China). Ectopic expression of Twist1 was achieved through pcDNA-Twist1 transfection, with an empty pcDNA vector used as a control. The expression levels of Twist1 were detected by qRT-PCR. Cells were grown in 6-well plates until confluent, then transfected with Lipofectamine 2000 (Invitrogen, Shanghai, China) according to the manufacturer’s instructions. At 48 h post transfection, cells were harvested for qRT-PCR or western blot analysis.

Cell viability was tested with a Cell Proliferation Reagent Kit I (MTT) (Roche Applied Science). The cells were grown in 96-well plates. Cell viability was assessed every 24h following the manufacturer’s protocol. All experiments were performed in quadruplicate.

Transwells (Corning, Tewksbury, MA, USA, 8.0-μm pores) were used to measure GC cell migration and invasion ability. For the migration assays, at 48 h post transfection, 3 × 104cells in serum-free media were placed into the upper chamber of an insert (8-mm pore size; Millipore, Billerica, MA, USA). For the invasion assays, 1 × 105 cells in serum-free medium were placed into the upper chamber of an insert coated with Matrigel. Medium containing 10% FBS was added to the lower chamber. After incubation for 24 h, the cells remaining on the upper membrane were removed with cotton wool. Cells that had migrated or invaded through the membrane were stained with methanol and 0.1% crystal violet, imaged, and counted using an IX71 inverted microscope (Olympus, Tokyo, Japan). Experiments were independently repeated three times.

To construct a luciferase reporter vector, Twist1 3′-UTR fragment containing putative binding sites for miR-186 was amplified by PCR, and then the PCR product was subcloned downstream of the luciferase gene in the pLUC Luciferase vector (Ruibo, Guangzhou, China) and named Twist1 -3′-UTRWT. For the mutated construct, cells grown in 96-well plate were transfected with 100 ng of Twist1 -3′UTR-Wt or Twist1 -3′UTR-Mut, using the Lipofectamie 3000 (Invitrogen, USA). After 72 h of transfection, luciferase activity was assessed according to the Dual-Luciferase Reporter Assay protocol (Promega, Madison, WI). Each experiment was repeated in triplicates.

The Students t test (2 tailed), one-way ANOVA, and Mann-Whitney U test were conducted to analyze these data by SPSS 16.0 software. P values less than 0.05 were considered significant.