MiR-142 inhibits the development of cervical cancer by targeting HMGB1

MicroRNAs have been thought as a kind of about 17~22 nucleotide noncoding RNAs, which controlled the expression of related genes by binding the 3′-untranslated region (3′-UTR) of target genes based on the post-transcriptional level [6, 7]. Emerging studies have suggested that miRNAs are extensively deregulated in varieties of tumors, and exert anti-tumor or oncogenic role in biological progression of tumors, involving cell proliferation, apoptosis, motility, and invasiveness [8–10]. In recent years, some studies have demonstrated that miR-142 could be recommended as a tumor suppressor in gastric carcinoma, breast carcinoma, and lung cancer [11– 15], indicating that miR-142 might act as a powerful and useful therapy target for the treatment of cancer patients. The previous reports revealed that low expression of miR-142 was found in some cancer tissues, and the expression of miR-142 was significantly related to pathological indicators of cancer patients, and was involved in tumor biology by inhibition of related genes. For example, overexpression of miR-142 affected prostate cancer cell growth via targeting its androgen receptor. However, little is reported about the biological mechanisms of miR-142 in cervical cancer.

MiR-142 is obviously altered in cervical cancer tissues and cells 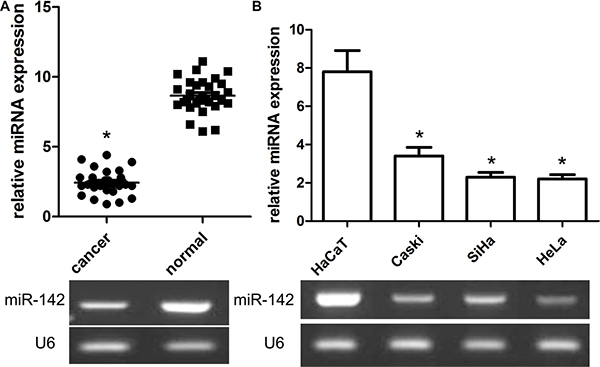 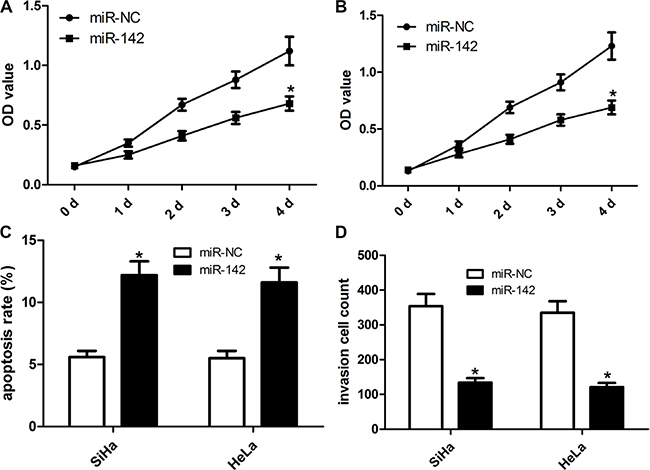 Figure 2: Ectopic miR-142 expression inhibits cell proliferation, invasion and induces cell apoptosis of cervical cancer cells. Cell proliferation was detected in SiHa (A) and HeLa (B) cells that were transfected with miR-142 mimics or mi-NC. (C) Cell apoptosis was detected by flow cytometry. Cell apoptotic rate was counted according to summation of the second quadrant and fourth quadrant. (D) Matrigel invasion assays were carried out to assess invasive property of cervical cancer cell. The number of invaded cells was calculated under the microscope, mean ± SD, *P < 0.001, Student’s T-test.

HMGB1 is a direct target of miR-142 in cervical cancer

To further out the potential molecular mechanisms underlying miR-142-induced inhibition of cervical cancer biology, we used the bioinformatic tools to predict potential target genes of miR-142 using the free TargetScan. According to bioinformatics calculation, our team found that HMGB1 can act as a direct target of miR-142 (Figure 3A). In view of these results, our team made a hypothesis that HMGB1 gene might be implicated in biological processes of miR-142 in the progressions of cervical cancer. To validate our hypothesis, our team firstly conducted a dual luciferase assay and identified that miR-142 overexpression obviously inhibited the luciferase activity of wt-3′UTR of HMGB1, however miR- 142 overexpression did not affect the luciferase activity of mut-3′UTR of HMGB1 in both cervical cancer cells (Figure 3B). Subsequently, our team investigated the impact of miR-142 on transcription and expression of HMGB1 gene. Our findings revealed that the expression level of HMGB1 protein was obviously decreased in miR- 142 over-expression group when compared with miR-NC group in SiHa and HeLa cells (Figure 3C). To further validate this result, our team investigated the expression levels of HMGB1 in 70 cases of cervical cancer samples using qPCR. We found that miR-142 expression was negatively correlated with the expression of HMGB1 based on the results from 30 cases of tumor tissues (R2 = − 0.851, p < 0.001) (Figure 3D). All in all, our data suggests that HMGB1 might become a potential target of miR-142. 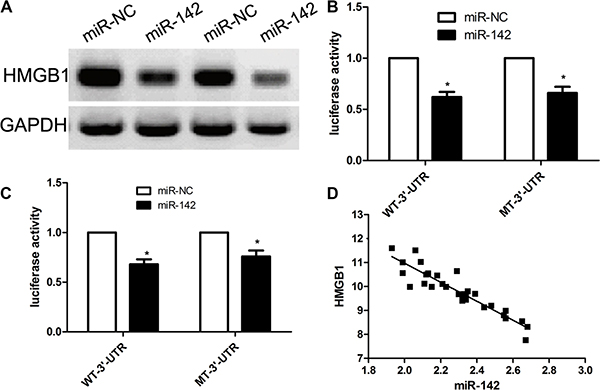 Figure 3: HMGB1 is a direct target of MiR-142 in cervical cancer cell lines. (A) miR-142 binding sites is located in the 3′-UTR of HMGB1 mRNA. (B) The wild type and mutant type of 3′-UTR reporter vectors and control group were co-transfected into cervical cancer SiHa cells with miR-142 or miR-NC. The relative luciferase activities were detected. (C) Western blot measure HMGB1 expression in cervical cancer cells. (D) According to Pearson’s correlation analysis, the expression of HMGB1 was inversely associated with the expression of miR-142. All assays were performed in triplicate, mean ± SD, *P < 0.001, Student’s T-test.

To characterize the biological role of miR-142 in targeting HMGB1 gene, miR-142 mimics or miR-NC were individually co-transfected into SiHa and HeLa cells with HMGB1 over-expression or negative control. Western blot analysis identified that ectopic HMGB1 expression reverse its inhibition by miR-142 in some degree (Figure 4A). Furthermore, analyses results from proliferation and invasion assays indicated that the overexpression of HMGB1 dramatically restored cell proliferation and invasion inhibited by miR-142 in SiHa and HeLa cells (Figures 4 and 5). In addition, over- expressed HMGB1 also had a similar opposite effect on SiHa and HeLa cell apoptosis mediated by miR-142 (Figure 5). These findings indeed suggested that the role of miR-142 in cervical cancer cells is based on its regulation of HMGB1 expression. 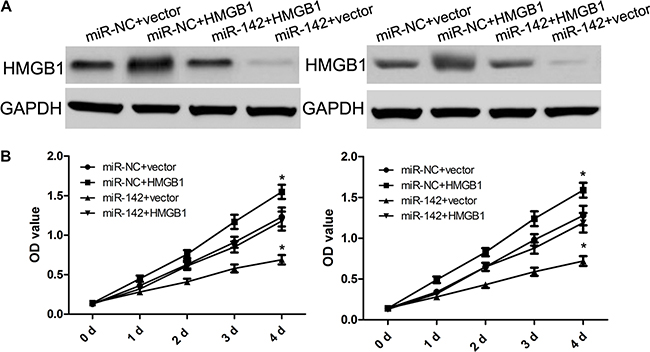 Figure 4: HMGB1 over-expression attenuates the suppressive effect of miR-142 on cell proliferation. (A) Western blot analysis of HMGB1 protein expression in cervical cancer cells with miR-NC or miR-142 transfected with either pcDNA3.1 or pcDNA3.1-HMGB1, GAPDH was used as a loading control. (B) CCK-8 assay detecting the proliferation of cervical cancer cells with different treatments. 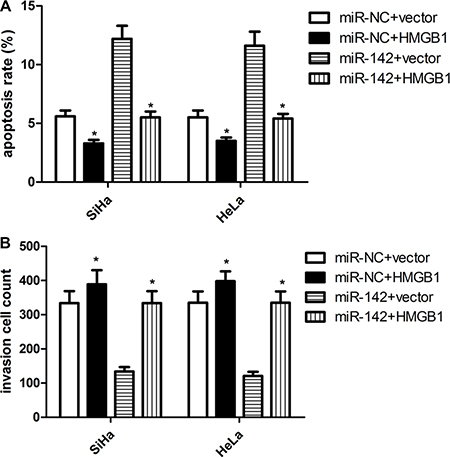 In recent years, it has been reported that miR-142 and HMGB1 is involved in the progression of tumors by binding to their target genes [16–20]. Besides, cancer metastasis also accounts for a main factor in cancer-related deaths [21]. Therefore, interference with tumor progression or metastasis will be a useful method for the treatment of cancers. It is critical to screen useful markers for interference with cancer metastasis, prognosis and individualized therapy of cervical cancer patients. In this study, we provide important evidence in support of miR- 142 functioning as a tumor suppressor in CC. We found that miR-142 suppressed proliferation and invasion of cancer cells both in vitro. We further identified that miR-142 targeted at HMGB1 and suppressed their expression at translation level in CC cells. In addition, we found aberrant expression of HMGB1 were significantly associated with lymphatic metastasis of CC patients. Taken together with previous results, this study presents supplementary evidence that overexpression of miR-142 could suppress proliferation and invasion of CC cells by targeting 3′-UTRs of HMGB1. Thus, miR-142 should become a promising novel target due to its diagnostic and prognostic value for cervical cancer.

Emerging evidence demonstrated miRNA as a biomarker, and miRNA-targeting precise treatment will become a hot topic for malignancies. The altered expression of miRNAs has been reported in the development of cervical cancer, and related to poor prognosis. For instance, some well-known miRNAs, including miR-22, miR-260, miR-37b, are widely reported as a diagnostic or prognostic factor for cervical cancer patients [22–24]. Up to now, miR-142 has been studied in some cancers, and exerts an obvious anti-tumor effect on tumor proliferation, just consistent with blocking of related genes [18]. In this work, our team identified that low expression of miR-142 can be found in a majority of cervical cancer tissues, and the potential mechanisms may be attributed to deregulation of generation of miR-142. Importantly, our correlation analysis identified that low miR-142 expression had no significant association with clinical features, like age, grade. All things considered, our data indicates that altered miR-142 expression is a common event in patients of cervical cancer, and altered miR-142 expression may be implicated into malignancy of cervical cancer.

In conclusion, our present study identified miR-142 as a tumor suppressor in the progression of cervical cancer, including cell growth, invasiveness and apoptosis via its direct target HMGB1. The study demonstrates a potential molecular mechanism underlying the inhibitory effect of miR-142 on cervical cancer, and indicates that miR-142 might act as a potential prognostic biomarker and therapeutic target in cervical cancer patients.

The use of all tissue specimens was approved by the Hospital Ethics Committee of Zhongnan Hospital of Wuhan University. The entire participant provides their written informed consent to participate in the study.

Primary tumor tissues and normal tissues were obtained from patients (mean age 57.5 ± 12.5 years, range 19–80 years) enrolled in the Department of Pathology, Zhongnan Hospital of Wuhan University between 2015 and 2016. All samples were obtained with patients’ informed consent and were histologically confirmed by staining with hematoxylin-eosin(HE). The histological grade of cancers was assessed according to criteria set by the American Joint Committee on Cancer (AJCC). None of the patients received radiotherapy or chemotherapy before surgery. The present study was approved by the Hospital Ethical Committee.

The cell lysates were prepared in RIPA buffer (Byotime, Haimen, China), and western blot was performed as previously described. The proteins were then transferred to a nitrocellulose membrane (Bio-Rad, Hercules, CA) and blocked with 5% non-fat milk in TBST for 2 h at room temperature with shaking. The membrane was immunoblotted with a primary antibody (Cell Signaling Technology, Danvers, MA) at 4°C overnight. Signals were developed by using an HRP-linked secondary antibody (1:10000) with the ClarityTM Western ECL Substrate (Bio-Rad, Hercules, CA). The intensity of the signals was determined by the FluorChemTM system (Protein Simple, Santa Clara, CA).

Total RNA was isolated from the cells with TRIzol reagent (Invitrogen, Carlsbad, CA,USA) and for human FFPE tissues the total RNA was isolated using the RecoverAllTM Total Nucleic Acid Isolation Kit (Ambion, Austin, TX, USA) according to the manufacturer’s protocol. qRT-PCR for 142 and HMGB1 was described in previous reports. qRT-PCR was performed using Takara (Dalian, China) on an FTC-3000TM System (Funglyn Biotech Inc., Toronto, Canada). U6 and GAPDH were used as controls for miRNA and mRNA level, respectively. Relative quantitation was calculated using the 2-ΔΔCt method.

As for dual luciferase activity assay, the 3′UTR target site could be amplified using PCR system, and then the luciferase reporter constructs were also amplified by PCR, which is the HMGB1 3′UTR and carried a putative miR-142-binding site. Cells were transfected with the reporter constructs and then transfected with miR-142 or control miRNAs using lipofectamine 2000 (Life Technologies, USA). Reporter assays were carried out using the dual-luciferase assay system (Promega) according to the manufacturer’s instructions.

CCK-8 assay (Kumamoto, Japan) was used to detect the cell growth status according to manufacturer’s instruction. Cell proliferation rate was detected at 0 hour, 24 hour, 48 hour and 72 hour following the treatment. As for cell invasion assay, Cell invasion was determined using 24-well transwell chambers with 8 μm pore size polycarbonate membranes (Corning Incorporated, Corning, NY, USA). 2 × 105 transfected cells were seeded on the top side of the membrane pre-coated with Matrigel (BD, Franklin Lakes, NJ, USA) in DMEM without serum. The lower chambers were filled with DMEM containing 10% FBS as a chemoattractant. After being incubated 24 hours, the non-invasive cells on the top side of the membrane were removed with a cotton swab, and invaded cells on the lower membrane surface were fixed in 20% methanol and then stained with 0.1% crystal violet. Invasion was quantified by counting cells in five randomly selected fields of view in each well under the invert microscope (Olympus, Tokyo, Japan).

All statistical analyses were performed with Graphpad Prism software. The statistical significance between the two groups was determined using Student’s t-test. All experiments were repeated at least three times. Data were expressed as mean ± SEM. Differences were considered statistically significant at P < 0.05.

This work was supported by the National Natural Science Foundation of China (No. 81272866). We greatly thank other members in our lab for valuable suggestions and writing.