Mutation analysis of a Chinese family with oculocutaneous albinism

Oculocutaneous albinism (OCA) is an autosomal recessive disorder characterized by either complete lack of or a reduction in melanin biosynthesis in the skin, hair, and eyes. OCA1, the most common and severe type, is caused by mutations in the tyrosinase (TYR) gene. In this study, we report a Chinese family with two members affected by OCA. Blood samples were collected from all family members. Genomic DNA was isolated from blood leukocytes, and all coding exons and adjacent intronic sequences of the TYR gene were examined for mutation analysis using polymerase chain reaction (PCR)-based sequencing. A pedigree chart was drawn, and clinical examinations and paraclinical tests were performed. Compound heterozygous mutations in TYR (c.832C>T and c.929_930insC, which resulted in p.Arg278* and p.Arg311Lysfs*7, respectively) were identified in the two patients with milky skin, white hair, photophobia, and reduced visual acuity, while other family members only carried one of two heterozygous mutations. In addition, a homozygous missense mutation c.814G>A (p.Glu272Lys) in the solute carrier family 45 member 2 (SLC45A2) gene was found in both patients and unaffected family members, suggesting that this may not be a causative mutation. The findings of this study expand the mutational spectrum of OCA. Compound heterozygous mutations (c.832C>T and c.929_930insC) in the TYR gene may be responsible for partial clinical manifestations of OCA, while the homozygous missense mutation c.814G>A (p.Glu272Lys) in the SLC45A2 gene may not be associated with OCA.

Oculocutaneous albinism (OCA) is a congenital and autosomal recessive disorder with an estimated prevalence of 1/17,000 worldwide. OCA is characterized by complete or partial lack of pigment in the skin, hair, and eyes due to a deficiency in melanin biosynthesis and is accompanied by optic defects, such as nystagmus, strabismus, and photophobia [1, 2]. In patients with OCA, the pigmentation present in skin, hair, and eyes may range from none to normal levels depending on the specific subtype. Clinical diagnosis of OCA type is difficult due to the variable clinical phenotypes. Thus, molecular analyses will provide important insights into accurate diagnosis and genetic counseling [3].

OCA can be classified as nonsyndromic and syndromic OCA. Nonsyndromic OCA includes four types, i.e., OCA1 (MIM#203100), OCA2 (MIM#203200), OCA3 (MIM#203290), and OCA4 (MIM#606574), caused by mutations in the tyrosinase gene (TYR), OCA2, tyrosinase-related protein gene (TYRP1), and solute carrier family 45 member 2 gene (SLC45A2), respectively [4–6]. OCA1 and OCA2 are the two most frequent types of OCA, accounting for approximately 50% and 30% of cases, respectively [5, 7]. OCA1 could be further subgrouped into OCA1A and OCA1B. In OCA1A, TYR null mutations producing incomplete polypeptides result in a complete lack of melanin throughout the patient’s life. In OCA1B, TYR mutations producing hypomorphic TYR enzymes cause retention of some enzyme activity, resulting in the development of some yellow hair pigments during the first few years of life and gradual accumulation of pigment in the skin, hair, and eyes over time [8–10]. Recently, in silico screening and molecular dynamics simulation (MDS) approaches have been widely used to identify the most probable mutations associated with OCA by computational prediction of mutant structures and consequences [11–15]. These methods may provide insights into the underlying molecular mechanisms involved in OCA.

In our current study, compound heterozygous mutations in TYR (c.832C>T and c.929_930insC, which resulted in p.Arg278* and p.Arg311Lysfs*7, respectively) were identified in the two patients who both showed complete lack of melanin formation in the skin, hair, and eyes, accompanied by nystagmus and photophobia. In addition, a homozygous missense mutation, c.814G>A (p.Glu272Lys), in the solute carrier family 45 member 2 (SLC45A2) gene was found in both patients and unaffected family members.

Clinical features of the two patients affected by OCA and two normal family members are shown in Figure 1. Both patients completely lacked pigmentation in the skin, hair, and eyes, even when they were adults, and presented with nystagmus and photophobia, showing typical symptoms of OCA1. In contrast, unaffected individuals in the OCA family exhibited normal pigment formation at the time of birth.

Figure 1: Clinical features of the families with OCA. Patient 1 (II-2) and patient 2 (II-3) showed typical OCA1 symptoms in terms of skin, hair, and iris pigments (provided and mosaiced by II-4). II-1 and II-4 showed normal pigment formation in the skin, hair, and iris.

Identification and analysis of mutations

Note: the unaffected II-1 and III-1 were not genetically analyzed. 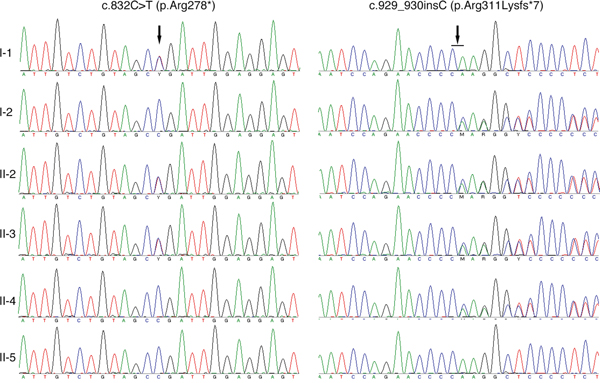 Figure 2: Sequencing results of the TYR gene. I-1 is the father, and I-2 is the mother. II-1 and II-4 are the patients’ older and younger sisters, respectively. II-5 is the spouse of II-4, and III-1 is their daughter. 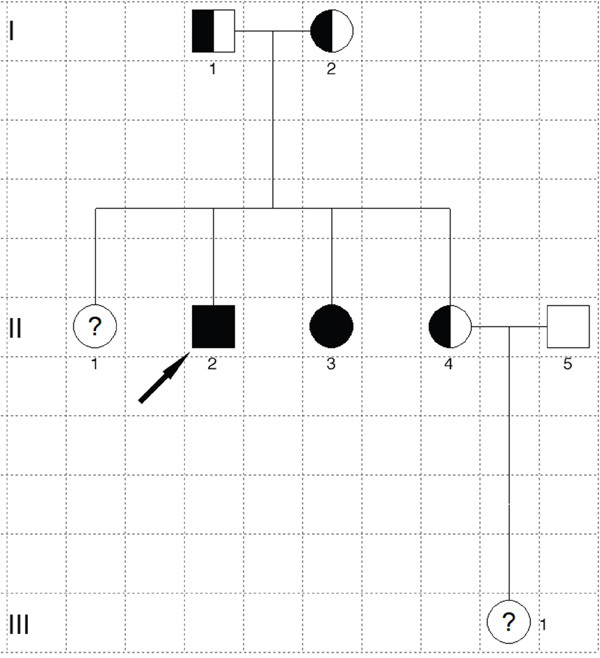 OCA1, with an estimated worldwide prevalence of 1/40,000, is caused by a mutation in TYR, which resides on chromosome 11q14.3 and encodes TYR protein. TYR has both tyrosine (a precursor to melanin synthesis) hydroxylase and dopa oxidase catalytic activities, which catalyze the critical first and second reactions, i.e., hydroxylation of tyrosine to l-3,4-dihydroxyphenylalanine (l-DOPA) and oxidation of l-DOPA to DOPA-quinone. A pseudogene known as the TYR-like gene (TYRL) is located on chromosome 11 and shares 98.55% sequence similarity within the 3′-region of TYR (exons 4 and 5) [16]. To avoid co-amplification of TYRL, locus-specific amplification was applied to amplify exons 4 and 5 of TYR as previously described [17]. Mutations in TYR can cause complete or partial OCA depending on residual activity. More than 200 different pathological mutations in TYR and 299 TYR mutations have been reported in the Albinism Database (http://www.ifpcs.org/albinism/index.html) and Human Gene Mutation Database (HGMD, http://www.hgmd.cf.ac.uk), respectively. In the clinical diagnosis of OCA, it is challenging to distinguish among different subtypes; however, as OCA is inherited autosomal recessively, molecular analysis is essential for accurate diagnosis of OCA.

We also screened mutations in OCA2 and SLC45A2, and only SLC45A2 c.814G>A (p.Glu272Lys) was found in patients with OCA. However, a homozygous SLC45A2 c.814G>A mutation was found in unaffected family members, indicating that this mutation may be not associated with OCA1. This was consistent with a previous report and the patient’s clinical phenotypes in the current OCA family as the SLC45A2 mutation may contribute to OCA4 rather than OCA1.

In summary, we report an OCA family and the molecular basis of the disease pathogenesis identified by Sanger sequencing of all coding exons of TYR, OCA2, and SLC45A2 genes. The findings of this study expand the mutational spectrum of OCA. Compound heterozygous mutations (c.832C>T and c.929_930insC) in the TYR gene may be responsible for partial clinical manifestations of OCA, while the homozygous missense mutation c.814G>A (p.Glu272Lys) in the SLC45A2 gene may not be associated with OCA.

One patient was a 34-year-old male, and the other patient was a 31-year-old female. Both patients showed typical features of OCA1. Written informed consent for genetic analysis and publication of personal photographs was obtained from each participant. This study was approved by the Medical Ethics Committee of Tongji Hospital, Tongji Medical College, Huazhong University of Science and Technology. All procedures were carried out in accordance with ethical guidelines for human subjects research. Family histories were determined, and pedigree charts were drawn to trace the inheritance model.

Genomic DNA was extracted using a QIAamp DNA blood mini kit (Qiagen, Hilden, Germany) from 200 μL peripheral blood. The primers were designed as described in the Master’s Thesis of Peng Jie (Zhongnan University) or using Primer Premier 5.0; primers covered the sequences of all coding domains of TYR, OCA2, and SLC45A2, including exon/intron junctions, and primer sequences are shown in Table 2. The primers were synthesized by Invitrogen (Shanghai, China). Each 50-μL PCR mixture contained 100 ng genomic DNA, 2 μL of 10 μM forward and reverse primers (with a final concentration of 400 nM), and 25 μL of 2× Taq PCR MasterMix (Takara, Dalian, China). PCR was carried out in Veriti thermocycler (Applied Biosystems, Foster City, CA, USA) using the following protocol: 95°C for 3 min; 35 cycles of denaturation at 95°C for 30 s, annealing at 55°C for 30 s, and extension at 72°C for 45 s; and a final extension at 72°C for 7 min. The amplified products were purified with a cycle-pure kit (Axygen, Wujiang, China) and sequenced using an ABI 3500 DNA sequencer (Applied Biosystems). DNA sequences were analyzed with a genomic reference sequence on NCBI BLAST. The mutation was named according to the recommendations of the Human Genomic Variation Society (HGVS: http://www.hgvs.org/).

This work was partially supported by the National Natural Science Foundation of China (No. 81500925).

3. Hutton SM, Spritz RA. Comprehensive analysis of oculocutaneous albinism among non-Hispanic caucasians shows that OCA1 is the most prevalent OCA type. The Journal of investigative dermatology. 2008; 128:2442-2450.

11. Kamaraj B, Purohit R. In silico screening and molecular dynamics simulation of disease-associated nsSNP in TYRP1 gene and its structural consequences in OCA3. BioMed research international. 2013; 2013:697051.

20. Chaki M, Mukhopadhyay A, Chatterjee S, Das M, Samanta S, Ray K. Higher prevalence of OCA1 in an ethnic group of eastern India is due to a founder mutation in the tyrosinase gene. Molecular vision. 2005; 11:531-534.