Patients with chronic lymphocytic leukemia (CLL) harboring TP53 aberrations (TP53abs; chromosome 17p deletion and/or TP53 mutation) exhibit an unfavorable clinical outcome. Chromosome 8 abnormalities, namely losses of 8p (8p−) and gains of 8q (8q+) have been suggested to aggravate the outcome of patients with TP53abs. However, the reported series were small, thus hindering definitive conclusions. To gain insight into this issue, we assessed a series of 101 CLL patients harboring TP53 disruption. The frequency of 8p− and 8q+ was 14.7% and 17.8% respectively. Both were associated with a significantly (P < 0.05) higher incidence of a complex karyotype (CK, ≥3 abnormalities) detected by chromosome banding analysis (CBA) compared to cases with normal 8p (N-8p) and 8q (N-8q), respectively. In univariate analysis for 10-year overall survival (OS), 8p− (P = 0.002), 8q+ (P = 0.012) and CK (P = 0.009) were associated with shorter OS. However, in multivariate analysis only CK (HR = 2.47, P = 0.027) maintained independent significance, being associated with a dismal outcome regardless of chromosome 8 abnormalities. In conclusion, our results highlight the association of chromosome 8 abnormalities with CK amongst CLL patients with TP53abs, while also revealing that CK can further aggravate the prognosis of this aggressive subgroup.

The great majority (~80%) of patients with chronic lymphocytic leukemia (CLL) carry one of the chromosomal aberrations routinely analyzed by fluorescence in situ hybridization (FISH), namely deletions of 13q [del(13q)], 11q [del(11q)] and 17p [del(17p)] as well as trisomy 12. These aberrations are associated with distinct clinical outcome [1, 2]. In particular, del(17p) cases have the worst clinical outcome and the shortest overall survival (OS). Of note, it has been described that the remaining TP53 allele in del(17p) cases is generally mutated, although some CLL patients may harbor isolated TP53 mutations [3]. Taking into account both TP53 deletions and mutations, the rate of TP53 aberrant CLL cases peaks at 10% at diagnosis [4, 5] and may even exceed 40% at disease progression, mainly in patients previously treated with chemotherapy [6]. In addition, genomic complexity detected by chromosome banding analysis (CBA) or genomic microarrays also predicting rapid disease progression, is correlated to TP53 disruption in a significant proportion of patients [7–9].

Nonetheless, some CLL cases with TP53abs remain asymptomatic for extended periods of time, pointing to multiple associated genetic factors underlying the heterogeneity of this group of patients [14, 15].

Alterations of chromosome 8, and particularly losses of 8p (8p−, affecting several regions, from 8p11 to 8p23) and gains of 8q (8q+, usually involving 8q24, where MYC is located), have been suggested as new prognostic markers in CLL, even for patients harboring TP53abs. Although initial microarray studies identified chromosome 8 alterations in around 5% of the general CLL population, subsequent analyses detected an increased frequency in patients with del(17p), ranging from 28 to 80%; 8p− and 8q+ alterations were frequently concomitant and displayed an independent correlation with a shorter OS [16–21].

However, due to the small size of the evaluated cohorts, definitive conclusions could not be drawn regarding the actual impact of chromosome 8 abnormalities in CLL patients harboring TP53abs. In the present study we sought to obtain more insight into this issue by analyzing a series of 101 CLL patients with TP53abs, especially focusing on the potential prognostic value of 8p losses and 8q gains in this poor prognostic group of patients.

A total of 101 patients carrying TP53 abnormalities were included in this study: 92 cases with del(17p) and 9 additional cases with TP53 mutations. Demographic, clinical and biological data for the entire cohort are summarized in Table 1.

Table 1: Baseline characteristics of patients at diagnosis and last follow-up

Values are given as median (range) or number (%). Hemoglobin is expressed as mean (range).

*Although 6 patients were diagnosed as MBL (monoclonal B-cell lymphocytosis), all of them had already progressed to CLL at the time of study. **Some centers only provided information regarding the Binet stage without the physical examination and the analytical parameters.

Table 2: Chromosome banding analysis and FISH results in patients with alterations of chromosome 8 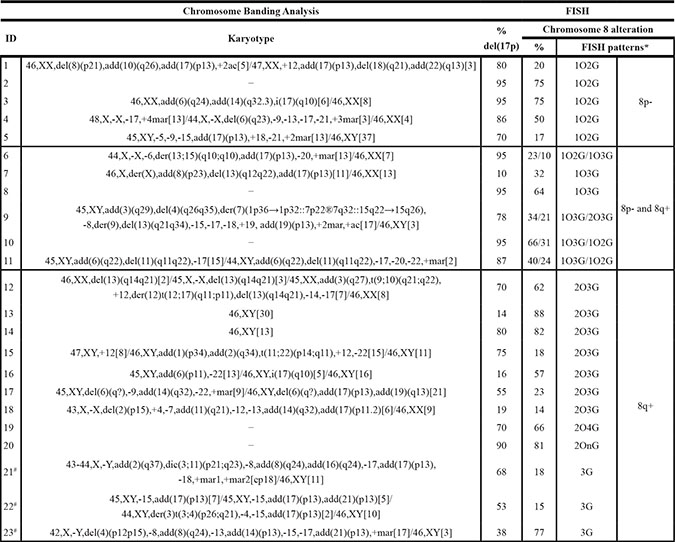 #Only the MYC probe was analyzed.

Overall, with a median follow up of 62 months (0–201), 81/97 cases (83.5%) had received treatment. Of note, in 34/93 cases (36.6%), therapy was administered prior to chromosome 8 testing. In 17/23 cases with 8p− and/or 8q+ (73.9%), these alterations were observed before treatment, whereas in the remaining six patients therapy-related acquisition could not be formally excluded as no relevant sample from the time of diagnosis was available for testing. 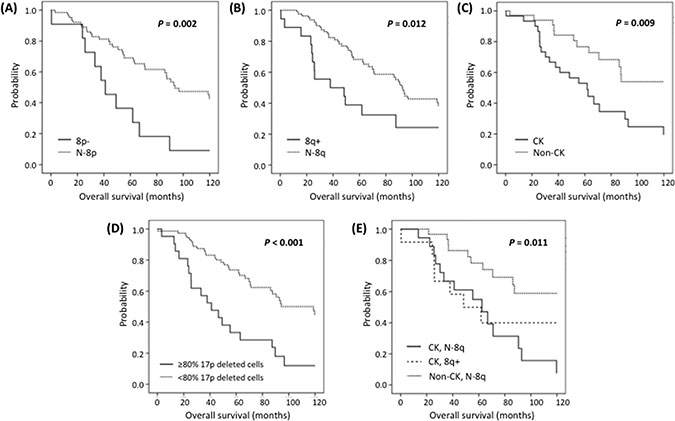 NA, not assessed; NR, not reached.

Regarding chromosomal abnormalities detected by CBA, patients with CK exhibited a shorter OS (P = 0.009), which was independent of the presence or absence of 8q+ (48 vs. 62 months, P = 0.538) (Figure 1). Similar results were obtained when cases analyzed after treatment were excluded from the statistical analysis (Supplementary Figure S2). On multivariate analysis including 8q+, ≥ 80% of 17p-deleted cells and CK only ≥ 80% of 17p-deleted cells (P = 0.046, HR = 2.2) and CK (P = 0.027, HR = 2.5) retained independent significance (Table 3). Multivariate analysis including 8p− cases could not be performed due to the low number of patients with available data from both CBA and 8p status.

Mounting evidence suggests that within CLL patients with TP53abs additional genetic features may influence the clinical outcome [17, 22, 23]. More specifically, alterations in chromosome 8 are more frequently detected in CLL patients with TP53abs and have been proposed as potentially prognostic markers in this aggressive group. Nevertheless, large studies focusing on the characterization and clinical outcome of this subset of patients are lacking. In order to address this issue, we retrospectively analyzed 101 CLL patients with TP53abs from our collaborating institutions. The frequency of 8p− was 14.7%, whereas 8q+ was detected in 17.8% of patients, being concomitant in 30% of cases with chromosome 8 alterations. To the best of our knowledge, this is the largest cohort of patients with TP53abs confirming the enrichment of chromosome 8 abnormalities in this disease subgroup. The frequencies reported herein are lower than those in previous studies, which, however, concerned significantly smaller cohorts, thus raising the possibility of selection bias [17, 19, 20].

The high percentage of de novo chromosome 8 alterations reported here suggests that 8p− and 8q+ can occur early in the course of the disease. This is in agreement with earlier reports of 8p− and 8q+ in treatment-naïve patients [20, 21]. Indeed, subsequent whole-exome sequencing studies analyzing clonal heterogeneity also suggested 8p− and 8q+ as early events during CLL development, whereas TP53 aberrations seem to appear later in the course of the disease [24].

Regarding the clinical characteristics of patients with alterations in chromosome 8 at diagnosis, no significant differences could be identified between groups except for gender distribution and hemoglobin levels. As for the genetic characteristics, we found a higher percentage of 17p-deleted nuclei in patients with 8p− or 8q+. Furthermore, in accordance with previous reports, a higher rate of CK was associated with both chromosome 8 abnormalities (8p− and 8q+) [25, 26]. Concerning clinical outcome, even though both 8p− and 8q+ exhibited a shorter TTFT, differences did not reach statistical significance. Nonetheless, a decreased OS was observed for both 8p− and 8q+, with concomitant 8p− and 8q+ cases exhibiting the worst outcome. Concerning patients with isolated 8p− or 8q+, given the small number of cases, we could not statistically assess their potential impact on survival. Our findings indicate that co-existence of 8p− and 8q+ may have a potential clinical impact in CLL and should be better evaluated in future research. However, further studies in larger patient cohorts are needed to discern the clinical consequences of isolated 8p− or 8q+.

Karyotypic complexity has been reported to be significantly associated with TP53abs [7, 25, 27] and to have a negative impact on survival even within this aggressive subset of patients [8, 23, 27]. Our present study confirms and significantly extends previous reports highlighting the impact of genetic instability in the pathogenesis of the disease. Indeed, although 89% of cases with 8p− and/or 8q+ showed a CK, in the multivariate analysis only karyotypic complexity and the percentage of 17p-deleted nuclei maintained the statistical significance. This finding suggests that CK rather than chromosome 8 alterations is responsible for the dismal clinical evolution of these patients. Chromosome 8 alterations could reflect underlying genomic instability leading to karyotypic complexity and could suggest the implication of different genes such as MYC in 8q+ cases and tumor suppressors such as TNFRSF10A/B (8p21) in 8p− cases [20, 28]. Notably, however, almost 40% of cases with CK did not show 8p− or 8q+ but displayed the same poor outcome as those with chromosome 8 alterations and CK.

In conclusion, our results highlight the association of chromosome 8 abnormalities with CK amongst CLL patients with TP53abs, while also revealing that CK can further aggravate the prognosis of this aggressive subgroup. These findings further underscore the relevance of chromosome banding analysis, which has the potential to refine prognosis even amongst cases with altered TP53.

For the purpose of this study, we evaluated CLL patients with TP53abs and available Carnoy fixed tumoral cells from 17 collaborating institutions in Spain and Greece (Supplementary Figure S3). All patients met the iwCLL diagnostic criteria [29]. A total of 101 patients carrying TP53 abnormalities were identified: 92 cases with del(17p) detected by FISH and 9 additional cases with TP53 mutations identified by Sanger sequencing. Of note, six patients had been diagnosed of CLL-like monoclonal B cell lymphocytosis (MBL) but had already progressed to CLL at the time of the study. Treatment initiation and response assessment followed standard criteria [29, 30]. The study was performed in accordance with national and international guidelines (Professional Code of Conduct, Declaration of Helsinki) and approved by the Ethics Committee of Hospital del Mar, Barcelona (2013/5093/I).

Chromosome 8 alterations were assessed in the same Carnoy fixed tumoral cells (peripheral blood or bone marrow) which were used for the detection of TP53abs. Several samples were obtained from Parc de Salut MAR Biobank (MARBiobanc), Barcelona. The median time from diagnosis to study of chromosome 8 abnormalities was 15 months (range: 0–145) and 36.6% of the patients had received treatment prior to the analysis. Commercial FISH probes covering LPL (8p21) and MYC (8q24) genes (Abbott Molecular, Abbott Park, IL) were used in 75 and 101 patients, respectively. Moreover, data from routine FISH (D13S319, CEP12 and ATM) and CBA (72 h + TPA and/or CpG + IL2) were also available in 91 and 66 cases, respectively. Complex karyotypes (CK) were defined as the presence of three or more numerical/structural chromosomal abnormalities.

Chi-square or Fisher exact tests were employed for discrete variables, while comparisons of continuous variables were assessed by the Mann–Whitney test. TTFT was defined as the time from diagnosis to the beginning of treatment and OS as the time from diagnosis to death or last follow-up. Both parameters were evaluated using Kaplan-Meier plots within the first ten years of follow-up. The effect of different covariates was assessed employing the log-rank test. Multivariate analysis according to the Cox proportional hazards regression model was used to evaluate the maintenance of their independent predictive value. Statistical analyses were performed using SPSS v.22 software (SPSS Inc, Chicago, IL, USA). P-values below 0.05 were considered statistically significant. The optimal cut-off value for the percentage of cells harboring del(17p) was assessed using Maximally Selected Rank Statistics in R.

The authors made no disclosure of conflicts of interest.