Malignant serous cavity effusion (MSCE), which includes malignant pleural, pericardial, and peritoneal effusions, is the most common complication of advanced cancer [1]. MSCE is frequently observed when anticancer therapy is no longer feasible or available [2]. It most commonly occurs in patients with advanced lung, breast, and ovarian cancer [3, 4], and results in serious symptoms such as dyspnea, pain, vomiting, and fatigue. Because MSCE affects survival rates and is correlated with a poor prognosis [3, 5], it is essential to develop effective treatments. Symptomatic MSCE is typically treated with paracentesis and intracavitary infusion of chemotherapy, biological response modifiers, or simple puncture to drain the effusion. However, the treatment efficacy is unsatisfactory [6, 7].

Vascular endothelial growth factor (VEGF) plays an important role in the development of MSCE [8, 9, 10, 11, 12]. Interestingly, several recent studies have indicated that bevacizumab, a VEGF inhibitor, is effective in preventing MSCE [10, 12, 13]. Kitamura et al. performed a retrospective study of the use of bevacizumab to control MSCE. They determined that intravenous administration of bevacizumab was effective for the management of malignant pleural effusion (MPE) in non-squamous non-small cell lung cancer (NSCLC) patients [14]. Similar prospective studies of the efficacy of intracavitary bevacizumab for the treatment of MSCE have demonstrated satisfactory response rates in patients [14, 15].

A total of 1,371 cancer patients with MSCE were treated at Shandong Cancer Hospital and Institute between August 2009 and February 2015. All patients received systemic chemotherapy for primary tumors and local treatment for MSCE. We excluded 310 patients because they received various combinations of the four treatments assessed in our study. In addition, 47 patients were excluded because they underwent pleurodesis prior to the removal of the indwelling cavitary catheter. Eight patients were excluded because an examination did not indicate cavity effusion in a timely manner. Twenty patients were excluded because survival data was not available and five because the systemic therapy regimen was not available. A total of 996 advanced cancer patients with MSCE were included in our analysis. Patient data including the type of cancer and effusion are shown in Table 1. The patients were classified into subgroups based on the local treatment regimen for MSCE: Group 1, paracentesis and intracavitary bevacizumab; Group 2, paracentesis and intracavitary chemotherapy; Group 3, paracentesis and intracavitary biological response modifiers; and Group 4, simple puncture to drain the effusion (Table 1). Patients who received systemic therapy for the treatment of primary tumors were divided into two groups based on whether they received intravenous bevacizumab. Finally, patients were classified into the following subgroups based on the type of effusion: the MPE group, malignant ascites (MA) group, and malignant pericardial effusion (MPCE) group. This study was approved by the Ethics Committee of Shandong Cancer Hospital and Institute (Jinan, Shandong, China).

Table 1: Characteristics of the patients and treatments selected [n (%)]

All patients required ultrasound-guided pleural, peritoneal, or pericardial catheterization. Each patient underwent drainage to remove as much of the MSCE as possible. Intracavity administration of the therapeutic agents was then performed. Bevacizumab was infused at a dose of 100 or 200 mg diluted in 50 mL of physiological saline. This treatment was repeated every week until a response was observed. The chemotherapeutic agents we analyzed were cisplatin, 5-fluorouracil, and bleomycin, and the biological response modifiers were lentinan and IL-2R. Patients were required to carefully turn over every 10 min to ensure sufficient absorption of the therapeutic agents in the serous cavity.

Clinicopathological data were collected for all patients, which included treatment response. Short-term therapeutic efficacy was evaluated as previously described [7, 15, 17] and according to the Response Evaluation Criteria in Solid Tumors version 1.1. Short-term efficacy was classified as either complete response (CR; effusion and symptoms disappeared and the patient was stable for > 8 weeks), partial response (PR; the size of the effusion was reduced by 50%, symptoms improved, and no subsequent growth in the effusion was observed over an 8-week period); stable disease (SD; the effusion size was reduced by < 50% or remained unchanged; and progressive disease (PD; the effusion size increased). The objective response rate (ORR) involved the assessment of CR and PR, and the effusion control rate (ECR) involved the assessment of CR, PR, and SD. Progression-free survival (PFS) was defined as the interval between the initiation of local treatment and the time of either effusion progression or death.

A total of 996 patients (501 men and 495 women, median age = 69 years) were enrolled in our study. All patients received local treatment for MSCE and systemic chemotherapy for the treatment of primary tumors. There were 72 patients who underwent paracentesis and received intracavitary bevacizumab, 530 who underwent paracentesis and received intracavitary chemotherapy, 298 who underwent paracentesis and received intracavitary biological response modifiers, and 96 who underwent simple puncture to drain the effusion. Additionally, there were 363 patients who received systemic chemotherapy with intravenous bevacizumab and 633 who received systemic chemotherapy without intravenous bevacizumab. A total of 574 patients had MPE, 297 had MA, and 125 had MPCE. All patients were followed-up for a median duration of 11.2 months. The final follow-up session occurred in February 2016. During the follow-up period, 954 patients either had a recurrence of the effusion recurrence or died of cancer. The patient characteristics are shown in Table 1. No significant differences were observed between the treatment groups.

Table 2: Factors associated with PFS in univariate and multivariate analyses

Treatment efficacy in all 996 patients 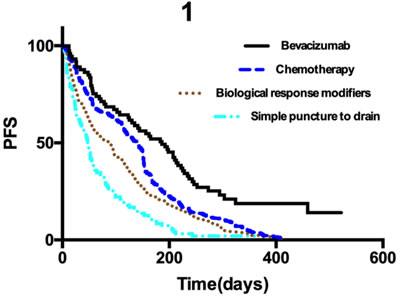 Table 3: Comparison of responses to treatments in all the patients, patients with different effusion type, and patients who received or did not receive intravenous administration of Bev [n (%)] in different groups [days]

Table 4: Comparison of adverse events among the treatment groups [n (%)]

Fluid is normally produced in the pleural, pericardial, and abdominal cavities of healthy individuals. A balance of lymphatic production and absorption maintains equilibrium [19]. Pathological processes can accelerate or block effusion production, which leads to the accumulation of excess fluid. MSCE is a frequent and severe complication of advanced cancer. It can occur through two mechanisms: (1) tumor cell secretion of VEGF and other cytokines that increase capillary permeability and promote angiogenesis, and (2) occlusion of the lymphatic conduit by cancer cells, which can increase the hydrostatic pressure, disrupt the flow of lymphatic effusions, reduce water and protein absorption, and lead to fluid retention in the serous cavity [20, 21]. MSCE often results in complications that can affect patient quality of life and shorten survival times [22].

Both local and systemic therapies have been used to treat MSCE. Local treatments include paracentesis and intracavitary infusion of chemotherapy, biological response modifiers, and simple puncture to drain the effusion. Paracentesis and intracavitary infusion of chemotherapy can inhibit tumor progression. Therefore, it is the most common local treatment combination for MSCE. However, it can promote adhesion of the serosal membrane to the cavity. In addition, patients with advanced cancer usually cannot tolerate the AEs associated with systematic chemotherapy. Intracavitary infusion of biological response modifiers is an alternative treatment option for MSCE. Although biological response modifiers have suitable anti-tumor effects, they can also cause AEs and adhesion of the serosal membrane and cavity. Importantly, this type of treatment only relieves symptoms temporarily. Similarly, a simple puncture to drain the effusion typically only offers only temporary relief. It can also lead to a loss of protein and electrolytes, and increase the chance of infection, errhysis, and other complications. Overall, systemic treatments are essential for patients with MSCE of neoplastic origin. Because most patients receive multiples lines of chemotherapy, they may not tolerate an increase in pain and toxicity. Thus, neither traditional local treatments nor systemic therapy can achieve satisfactory patient outcomes.

Elevated VEGF expression, increased vascular permeability, and angiogenesis underlie the development of MSCE [12]. Angiogenesis was shown to shown to contribute to the production of MSCE [23], and overexpression of VEGF, a major angiogenic factor, has been frequently observed in tumor cells [24]. VEGF can cause tumor vessels to become disorganized, leaky, and tortuous. It also promotes the production of MSCE by perturbing the balance between fluid production and lymphatic absorption [23, 25].

Bevacizumab is a recombinant, humanized monoclonal anti-VEGF antibody that consists of the antigen-binding complementarity-determining regions of a murine antibody. It blocks binding of human VEGF to its receptors [26]. Bevacizumab was shown to inhibit the growth of 13 different types of malignant cells, and reduced the density, diameter, and permeability of vessels [27]. Several studies have demonstrated that intracavitary administration of bevacizumab was a safe and effective therapeutic approach for controlling MSCE [13, 26, 28-30].

Our study also had several limitations. First, there was inherent bias owing to the retrospective nature of the study. Second, all of the patients were Chinese individuals treated at a single hospital. Therefore, the findings may not be applicable to other populations. A large prospective study is now required to validate our findings.

The authors report no conflicts of interest for this work.

This study was supported by the Special Fund for National Health and Family Planning Commission: specification and application of image-guided individualized radiotherapy in NSCLC (Grant No. 201402011).

3. Ayantunde AA and Parsons SL. Pattern and prognostic factors in patients with malignant ascites: a retrospective study. Annals of oncology. 2007; 18:945-949.

10. Hamed EA, El-Noweihi AM, Mohamed AZ and Mahmoud A. Vasoactive mediators (VEGF and TNF-alpha) in patients with malignant and tuberculous pleural effusions. Respirology. 2004; 9:81-86.