* These authors have contributed equally to this study as first authors

Lung cancer is the second most common cancer type and the leading cause of cancer death worldwide [1, 2]. Non-small cell lung cancer (NSCLC) is approximately 85% of lung malignancies and most patients are diagnosed with far advanced stage NSCLC. Although agents that target specific genetic alterations have been developed for lung cancer treatment, the prognosis of lung cancer is still poor and the 5-year survival rate has been less than 5% in advanced-stage disease.

The epidermal growth factor receptor (EGFR) is overexpressed on various types of solid cancers, including NSCLC [3]. Although the prognostic or predictive function of EGFR expression in patients with NSCLC remains controversial, some researches have suggested that upregulation of EGFR expression is related to tumor establishment and spread and poor prognosis in NSCLC [3-5]. Dysregulation of EGFR in several tumors including lung cancer, head and neck cancer, esophageal cancer, and others, correlated with metastasis and poor survival outcome [5]. Increased knowledge of EGFR signaling pathway regulation in NSCLC has led to develop targeted agents. Anti-EGFR monoclonal antibodies which bind to the extracellular domain of this receptor, or small-molecule tyrosine kinase inhibitors which block the kinase domain are currently available EGFR-targeted drugs [3, 6, 7]. These EGFR-targeted agents have been related with improvement in survival of NSCLC patients. Recently, the SQUIRE, FLEX, and INSPIRE trials showed that the combination of EGFR monoclonal antibodies, such as necitumumab and cetuximab, with platinum-based cytotoxic chemotherapy as a first-line therapy in squamous cell lung cancer led to prolonged survival outcomes, while the same results were not seen in adenocarcinoma [8-11]. However, the role of anti-EGFR antibodies in NSCLC has not been established.

Many preclinical data support the combination of EGFR targeting therapy with EGFR-TKIs and anti-EGFR mAbs to get over intrinsic or acquired resistance mechanisms and to amplify the potency of EGFR signaling inhibition[3, 21-23]. These data suggest that dual blockade of EGFR pathway could be new treatment strategies to maximize effective target inhibition. Recent phase I/II trials that added cetuximab to erlotinib demonstrated stable disease in majority of patients (11 of 13) with acquired resistance, although there was no partial response on radiologic images. It is to be noted that one third of the patients discontinued combined therapy due to intolerable rash [3, 24]. Thus, it is important to develop a tolerable dual blockade of the EGFR pathway with EGFR mAb plus EGFR-TKI and to identify clinical applicability.

We already performed the phase I clinical trial to determine recommended phase II dosing (RPIID) and safety of the combination of gefitinib and nimotuzumab [3]. This phase I trial demonstrated a well-tolerated safety profile without dose-limiting toxicity and 25% partial response (4/16 patients) and 43.8% stable disease (7/16 patients) [3]. Based on these phase I trial results, the RPIID for nimotuzumab is a 200 mg weekly i.v. and for gefitinib 250 mg daily p.o.[3] We evaluated the efficacy of dual inhibition of the EGFR pathway with nimotuzumab plus gefitinib in advanced NSCLC patients who were previously treated with platinum-based chemotherapy.

A total of 160 patients were enrolled between Feb. 2012 and Jun. 2014 at 6 centers in Korea. Of 160 patients, 80 were randomly allocated to the gefitinib and 80 patients were assigned to nimotuzumab plus gefitinib. Five patients (2 in nimotuzumab plus gefitinib 3 in gefitinib arm) withdrew consent before treatment. Finally, 155 patients received at least one dose and could be evaluated for efficacy and toxicity in this study. Progressive disease was confirmed in 139 patients by the data cutoff point of March, 30th 2016 (Figure 1). 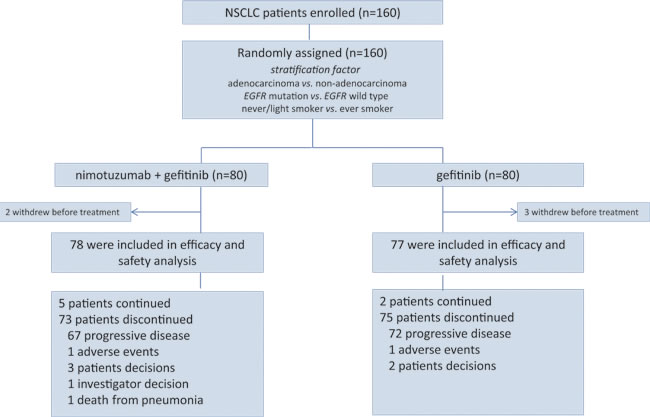 Figure 1: Trial profile in this study.

Table 2: Tumor response according to RECIST

†Five patients (2 in the experimental and 3 in the control arm) withdrew from study before treatment, and were excluded from analysis.

Tumor responses were assessed with the use of Response Criteria in Solid Tumors (RECIST), version 1.1 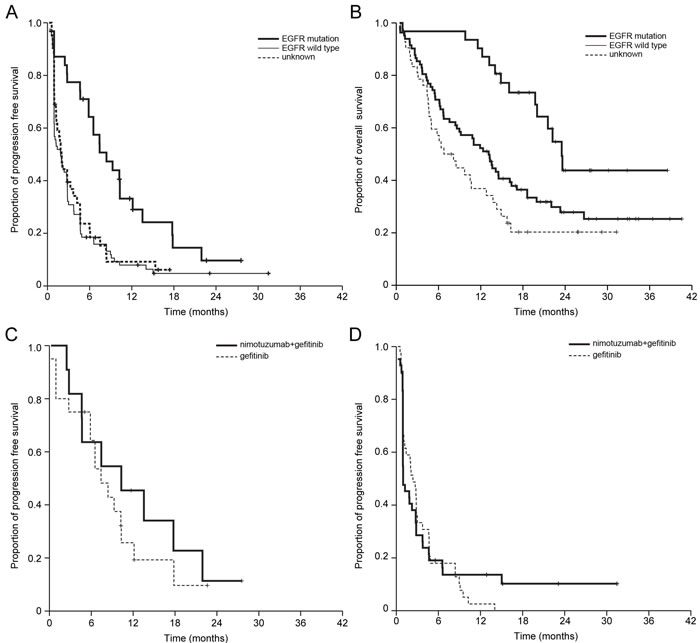 Toxic-effect grades are based on the National Cancer Institute Common Terminology Criteria (version 3.0).

In contrast to previous studies, in our study, treatment with the EGFR monoclonal antibody nimotuzumab did not prolong survival in squamous cell lung cancer patients. In patients who had acquired resistance to EGFR-TKI, dual blockage of EGFR with afatinib and cetuximab demonstrated robust clinical activity in both those with and without T790M mutations [25]. This result implicated that a significant portion of tumors in patients with acquired resistance to gefitinib or erlotinib still remain dependent on EGFR signaling for survival. Therefore, more complete blockade of EGFR is an effective strategy that could be worthwhile for further study in EGFR mutated patients with acquired resistance.

There are several potential reasons for the lack of variation in outcomes between combined- and mono-therapy. Firstly, the affinity of nimotuzumab is ~10 times lower than those of cetuximab and necitumumab, and thus this lower affinity of nimotuzumab might cause the negligible blocking effect of the EGFR pathway seen in our study [13]. Additionally, the small number of enrolled patients, slight imbalance in prognostic factors between the two treatment arms favoring the gefitinib arm, and lack of patient selection based on EGFR expression could have led to the negative findings. The percentage of EGFR mutation was quite high in the gefitinib arm; although this difference was not statistically significant, it may have had an impact on treatment outcomes in this clinical trial.

Conclusively, the dual inhibition of EGFR pathway with nimotuzumab plus gefitinib was not associated with better outcomes compared with gefitinib alone for second-line treatment of advanced NSCLC patients, regardless of EGFR mutation status.

An open label, randomized, phase II trial was designed to prospectively evaluate the efficacy of dual inhibition of EGFR with nimotuzumab plus gefitinib in advanced NSCLC patients that were previously treated with platinum-based chemotherapy. A total of 160 patients were allocated in a 1:1 ratio to either the treatment arm (nimotuzumab plus gefitinib) or the control arm (gefitinib alone) using the minimization method to balance to center, histology (adenocarcinoma vs. non-adenocarcinoma), EGFR mutation (EGFR mutation vs. wild type), and smoking status (never/light vs. ever smoker). The treatment arm consisted of 200 mg of nimotuzumab administered via intravenous infusion over 30 min, once per week, and gefitinib at a fixed dose of 250 mg daily until disease progression or unacceptable toxicity. The control arm received gefitinib at a fixed dose of 250 mg daily. Each treatment cycle was defined as 28 days, regardless of omitted doses. Further treatment after disease progression was at the physician’s discretion.

The primary endpoint was the evaluation of the PFS rate at 3 months. Secondary endpoints included PFS, OS, ORR and safety. PFS was assessed from the date of randomization to that of disease progression determined by CT or MRI using RECIST criteria or death from any cause. OS was assessed from the date of randomization until death from any cause. Target lesions were assessed via an independent central review at baseline (within 4 weeks of randomization). To assess toxicity, the National Cancer Institute Common Toxicity Criteria (version 4.0) were used during the study period and follow-up.

This study was conducted in accordance with the Declaration of Helsinki, the International Conference on Harmonization Guidelines on Good Clinical Practice. The protocol was approved by the Protocol Review Committee of the Korean Cancer Study Group and by the Institutional Review Board at each participating institute. All patients provided written informed consent. Study protocol and informed consent forms were approved by institutional review boards of each institution. The trial is registered on ClinicalTrials.gov (clinicaltrials.gov identifier NCT01498562, protocol number: KCSG LU12-01).

Trial eligibility required pathologically or cytologically confirmed stage IV NSCLC; measurable disease by Response Evaluation Criteria in Solid Tumors Group (RECIST); prior systemic therapy with platinum-based chemotherapy; a performance status of 0,1, or 2 based on Eastern Cooperative Oncology Group criteria; age 18 years or older; and adequate bone marrow, liver, and kidney function. Patients with central nervous system metastases were eligible if there were no symptoms or treatment for brain metastasis had been completed. Patients with prior malignancies were eligible if there was no evidence for recurrence for at least 5 years.

We performed computed tomography or magnetic resonance imaging scans firstly after 4 weeks, and then every 8 weeks, or at the time when disease progression was suspected. Based on the Response Evaluation Criteria in Solid Tumor (RECIST version 1.1) criteria, responses were assessed and categorized as complete remission (CR), partial response (PR), stable disease (SD) or progressive disease (PD).

Throughout the study, safety was assessed by monitoring and recording AEs, vital signs, clinical chemistry, hematology, and urinalysis. Event severity was graded according to the National Cancer Institute Common Terminology Criteria Adverse Events version 4.0. Dose modification for gefitinib and nimotuzumab was not allowed. Treatment interruption was required for grade 3 and 4 toxicities per the protocol algorithm. A cycle could be delayed up to 2 weeks to allow sufficient time for recovery. If treatment could not be started after 2 weeks, the patient was removed from the study.

We used the stratified log-rank test for PFS and OS. The ORR and other categorical outcomes between the two groups were compared using the chi-squared test or Fisher’s exact test. Multivariable cox regression was performed to adjust for potential confounders such as sex, age, and performance status. We assumed that a PFS rate at 3 months of 0.55 would indicate clinical usefulness of the regimen, whereas a PFS rate at 3 months of 0.4 would be the lower limit of interest. Assuming 12 months for accrual and additional 12 months for follow-up, 71 patients per arm were needed to achieve 80% power to detect a difference of 0.15 in PFS rate at 3 months at a two-sided type. Taking drop-out rate into account, the total sample size was set at 160 (80 for each treatment arm). Efficacy and safety analyses were planned for patients who received at least 1 dose of the treatment. PFS and OS were analyzed using the Kaplan–Meier method to estimate the median values with 95% CIs. Two-sided P-values less than 0.1 for the PFS and less than 0.05 for the others were considered statistically significant. All statistical analyses were performed using SPSS ver. 16.0 for Windows.