Serum prostate-specific antigen (PSA) level has been widely used to detect prostate cancer and monitor its treatment, including surgical therapy, radiotherapy, hormonal therapy, chemotherapy, and active surveillance. However, it is difficult to predict the aggressiveness of prostate cancer using the PSA measurement alone. [1]

It is important to elucidate the mechanism of systemic inflammation and immune responses to prostate cancer. We also reported that low serum neutrophil count predicts a positive prostate biopsy [5] and that the white blood cell (WBC) count is associated with benign prostatic hyperplasia. [6] Two meta-analyses reported that C-reactive protein (CRP) may also have prognostic value in patients with prostate cancer. [7, 8] Because the WBC count and the fractions of each of the WBC types and the CRP level are indicators of systemic inflammation and immune responses, these counts, ratios, or levels may be good candidate biomarkers for predicting aggressive cancer. It was reported that the serum neutrophil-to-lymphocyte ratio (NLR) predicts prostate cancer in men undergoing needle biopsy [9] and that the serum monocyte-to-lymphocyte ratio (MLR) predicts poor prognosis in primary pulmonary lymphoepithelioma-like carcinoma. [10]

The aim of this study was therefore to explore which parameters among serum WBC count and the fractions of WBCs and CRP and NLR and MLR are associated with high Gleason score prostate cancer.

The characteristics and biopsy findings of all 966 men are summarized in Table 1. Of them, 553 (57.2%) were positive for prostate cancer including 422 with high Gleason score cancer.

Table 1: Characteristics and biopsy findings of all men (comparison among three groups)

The data of clinical stages are available in 349 cases of 553 positive biopsy cases. In this cohort, serum monocyte fraction of WBC was significantly higher in the patients with clinical stage ≥T3 than with ≤T2 (p < 0.01).

The prediction of high Gleason score prostate cancer may be more valuable for the identification of clinically significant cancer in men with a PSA < 10 ng/ml rather than in men with a higher PSA level. We performed a subanalysis of 571 men with PSA < 10 ng/ml, and the characteristics and biopsy findings of these men are shown in Table 4. Of these men, 249 (43.6%) were positive for prostate cancer including 155 with high Gleason score cancer.

Age, PSA, PSAD, monocyte fraction, basophil fraction, and MLR were significantly higher (p < 0.05), whereas prostate volume, serum WBC count, and serum neutrophil fraction were significantly lower (p < 0.01) in the men in whom high Gleason score prostate cancer was found than in those with negative biopsy and in those in whom low Gleason score prostate cancer was found. CRP was not associated with the difference among these groups. 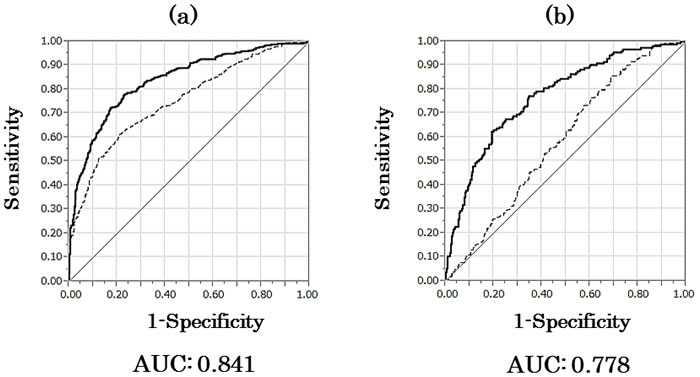 This is the first study, to our knowledge, to show an association of serum monocyte fraction of WBCs with high Gleason score prostate cancer. The serum monocyte fraction was significantly increased in the patients with high Gleason score cancer even in the group of men with a PSA < 10 ng/ml who were predicted to have low tumor volume from the PSA value alone. The cause of the increased monocyte fraction in patients with high Gleason score prostate cancer is not clearly defined. In vitro studies of prostate cancer reported that monocyte-induced cancer cell invasion mediates chemokine ligand 2 (monocyte chemotactic protein-1) and nuclear factor-κB activity [16] and that tumor stroma-derived factors skew monocyte to dendritic cell differentiation toward a suppressive phenotype [17]. Tumor-associated macrophages (TAMs), which are supposed to be derived from serum monocytes, may interact with tumor cells to promote cancer progression by producing various cytokines and chemokines. [18] We reported that the infiltration of TAMs in prostate biopsy specimens was predictive of disease progression of prostate cancer after hormonal therapy. [19] The creation of TAMs in the tumor microenvironment may be accelerated by high numbers of serum monocytes. Inversely, the large numbers of various cytokines and chemokines produced by cancer cells may have effects on the number of serum monocytes.

There are several limitations in this study. First, the number of patients diagnosed as having low Gleason score prostate cancer (i.e., Gleason score of ≤6) is low. Second, although this study included men in two hospitals, we did not undergo a retrospective central pathology review of the specimens. Finally, we decided to use the Gleason score determined from a needle biopsy specimen, which might differ from that determined from a prostatectomy specimen. [20]

Transrectal ultrasound-guided 12-core prostate needle biopsy without MRI fusion was performed in 966 men with suspicion of prostate cancer (643 men at Osaka University Hospital from January, 2010 to December, 2014 and 323 men at Osaka General Medical Center from January, 2010 to September, 2011). Indication of prostate needle biopsy was abnormal serum PSA level or abnormal radiological findings on MRI or PET-CT. In several cases, additional several target biopsies were performed in men with abnormal MRI images. Twenty-three repeat biopsies were included. Blood tests were performed before prostate needle biopsy. We retrospectively assessed age, serum PSA, prostate volume, WBC count, each fraction of WBCs (neutrophils, lymphocytes, monocytes, basophils, and eosinophils) and CRP level before biopsy for associations with biopsy findings (positive or negative and Gleason Score). PSAD was calculated as serum PSA level divided by prostate volume. NLR and MLR were calculated as each neutrophil fraction and monocyte fraction divided by lymphocyte fraction. We decided Gleason grades by the reports from the pathologists in each hospital based on classifications at the 2005 ISUP Consensus Conference. This study was approved by the institutional review board of Osaka University Hospital and Osaka General Medical Center.

This work was supported by JSPS KAKENHI Grant Number JP16K20137.