Colorectal cancer is the third most common malignancies, and the liver is the most frequent site of metastasis [1, 2]. Approximately 50% of colorectal cancer patients occur liver metastasis during disease evolution, which is a major cause of cancer death [1, 3]. Liver resection is the only potential curative treatment for colorectal liver metastases with studies reporting 5-year survival rates of approximately 35–60% [3–7].

Although several meta-analyses [13–15] of observational studies have evaluated short- and long-term outcomes for laparoscopic liver resection, but there are limited data. It is necessary to carry out an updated meta-analysis in accordance to the Preferred Reporting Items for Systematic Reviews and Meta-Analyses (PRISMA) Statement [16] by pooling data from all of the available studies. Thus, we conduct a meta-analysis to identify and screen the benefits of laparoscopic compared with open liver resection for treatment colorectal liver metastases.

Our initial search strategy yielded 689 potential articles after removing duplicates in a combined search of MEDLINE (PubMed), EMBASE and CENTRAL databases covering studies published until October 18th 2016 and a manual approach. 637 articles were excluded on the basis of their titles and abstracts according to the inclusion and exclusion criteria. A full-text examination of the remaining 52 articles was performed. 38 additional articles were further ruled out for the reasons outlined in Figure 1. In the end, 14 studies published between 2002 and 2015 were included in quantitative synthesis in this meta-analysis. A flow diagram of the further details on selection process was shown in Figure 1. 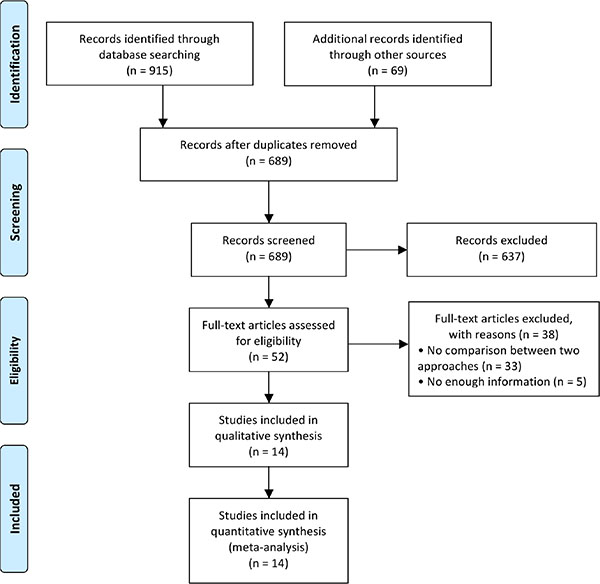 All included 14 studies [17–30] were retrospective studies that were conducted in Belgium (1), China (2), France (2), Japan (5), Norway (1), UK (1), and US (2). The informations about surgeons involved in these studies were not reported. 7 studies [17–19, 21, 25, 27, 28] had sample sizes greater than 100 patients. The baseline characteristics of these 14 studies in the meta-analysis were summarized in Table 1. A total of 1679 colorectal liver metastases patients were included in the meta-analysis: 683 patients treated with laparoscopic liver resection and 996 patients with open liver resection. All of studies stated that participators were consecutively enrolled.

Table 1: Baseline characteristics of the studies included in the meta-analysis 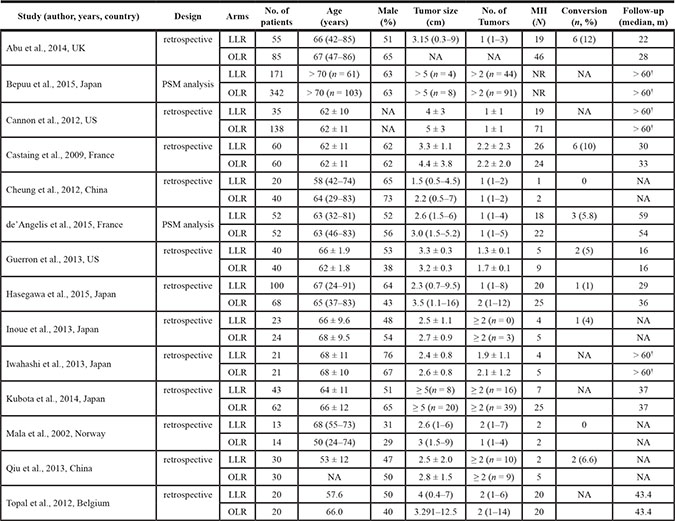 The quality judgment for each study was performed with Newcastle-Ottawa Scale (NOS) [31]. The evaluation stars of each study based on NOS judgment were shown in Table 2. All studies reviewed consecutive colorectal liver metastases patients in the selection of patients. However, laparoscopic surgery was manipulated in selected patients who were suitable, and the patients accepting open surgery were selectively matched. All included studies were comparable. The mean value for the 14 retrospective cohort studies assessed was 6.9 stars. Overall, all of included studies were evaluated as being moderate to high quality.

Table 2: Quality assessment of studies in the meta-analysis based on newcastle-ottawa scale 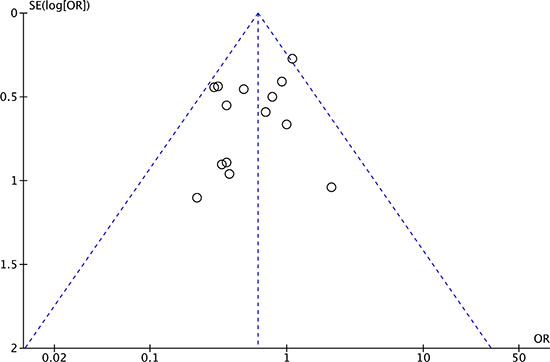 There are several limitations in this meta-analysis. First, the included studies were mainly retrospective comparative studies with inherent limitations related to the significant risk of selection [39] and reporting bias [40]. The overall quality of evidence for all pooled results was relatively low. Second, colorectal liver metastases patients treated with laparoscopic liver resections were a highly selected population. Laparoscopic liver resection requires extensive experience and expertise than open liver resection and is associated with a learning curve. Finally, most of included studies were relatively small sample sizes and lack of long-term oncological data. Only 6 studies had follow-up longer than 5 years. Additionally, many of the studies were from single a single site, which may affect generalizability. Larger and well definitive randomized controlled trials would increase this study’s predictive strength.

A comprehensive search was performed in MEDLINE (PubMed), EMBASE and CENTRAL databases to identify all relevant studies available from their inception to October 18th 2016. We also searched trial registries of ongoing trials. When the criteria for inclusion or exclusion of a study were controversial, the corresponding author was consulted.

The search strategy followed the identification and screening guidelines established by PRISMA statement. The following Mesh search headings and key words were used: (“laparoscopic liver resection” or ‘‘laparoscopic hepatectomy’’) and (“colorectal cancer” or “colorectal liver metastases”). These terms were used in different Boolean combinations. Our search was restricted to full-length articles published in English. We retrieved all eligible studies and evaluated the reference lists of the identified studies and reviews.

We included the following studies from the meta-analysis: (1) study design: comparing laparoscopic with open liver resection for colorectal liver metastases patients, (2) include more than 10 patients in each group (minimum of 20 patients), (3) the studies provided surgical and oncologic outcomes, and (4) available data for each surgical regimen. The most recent was used if dual (or multiple) studies were reported by the same institution. Study designs included randomized controlled trials and retrospective/prospective cohort or case-control studies.

The exclusion criteria of the meta-analysis were the following: (1) studies not reporting clinical outcomes of effectiveness, (2) just one surgical regimen (laparoscopic or open) was reported, (3) other minimally invasive surgery such as radiofrequency ablation was compared, and (4) abstracts, letters, editorials and expert opinions, reviews without original data, case reports.

Data was independently extracted and the quality of included studies were screened by two review authors (T.Z. and X.S.). The two authors extracted the interest variable data of included studies and entered into a dedicated database. The following data of each study was extracted: study characteristics (first author, study designs, surgical approaches, numbers of patients, and follow-up time), demographic measures (publication year, country, age, and gender), surgical outcomes (operation time, blood loss, perioperative blood transfusion, postoperative complication morbidity, postoperative mortality, and hospitalization time), and oncologic outcomes (surgical margins R0, recurrence, overall survival, disease-free survival). We defined perioperative mortality as 90-day hospital death, and hospitalization time including postoperative time and total hospital time. Local recurrence which were observed till the end of follow-up included hepatic only, extra-hepatic only, and both hepatic and extra-hepatic. Hepatic only and extra-hepatic complications were both contained in complications. The data accuracy and completeness were checked by two other authors (J.H. and L.W.). Discrepancies were resolved by consensus in all authors.

The risk of bias of the cohort studies was assessed using the Newcastle-Ottawa Scale [31]. The Newcastle-Ottawa Scale star system ranged 0 to 9 stars: 4 stars for selection, 2 stars for comparability, and 3 stars for outcome. In this mate-analysis, a study of the final score > 6 star was regard as a high-quality study. Risk of bias of the included studies were independently assessed by two review authors (T.Z. and X.S.). Disagreement was resolved by consensus in all authors.

This study was statistical analyzed by using Review Manager version 5.3.5 [41]. Most of included studies are retrospective cohort studies. So, OR is used to calculate the dichotomous data in this meta-analysis. The continuous data were calculated by MD with 95% CI. We derived the missing standard deviations from other statistics, such as P values or CI if needed. For example, P = 0.00001 was assumed when a P value was reported as P < 0.00001. Cochran’s Q test and the degree of inconsistency (I2) were used to assess heterogeneity among combined study results. A fixed-effects model was used if a P > 0.05 and I2 < 50%. Otherwise, data were pooled by using the random-effects. P < 0.05 indicated statistical significance in the integration results. Publication bias in outcomes was assessed and treated using standard methodology. The funnel plots were used to analyze publication bias.

31. Stang A. Critical evaluation of the Newcastle-Ottawa scale for the assessment of the quality of nonrandomized studies in meta-analyses. Eur J Epidemiol. 2010; 25:603–605.