Materials and methods: We initially searched PubMed, Cochrane Library and Embase databases from the founding of these databases to January 2016. Eligible studies investigating the 8 different chemotherapy regimens for treatment of metastatic/advanced breast cancer were included for direct and indirect comparison. The odds ratio (OR) and surface under the cumulative ranking curves (SUCRA) value of the incidence of toxicity among eight chemotherapy regimens were analyzed.

Conclusions: Capecitabine alone regimen and doxorubicin + docetaxel regimen may have a more frequent toxicity in the treatment of metastatic/advanced breast cancer.

Breast cancer, one of the most common malignancies worldwide, comprises 3% of all cancers in women worldwide [1]. Approximately 1.7 million women were diagnosed with breast cancer and 522,000 women were died of this disease in 2012 [2]. In China, the incidence rate of breast cancer rose by five times from 1980 to 2011, from 6.4/100,000 to 31.93/100,000 [3]. The 5-year survival rates of patients with breast cancer were 83.3%, respectively 97.1% in stage I but only 24.5% in stage IV [4]. Lack of effective treatments against invasion and metastasis of breast cancer made it more difficult to increase the survival rate and quality of life in breast cancer patients [5]. Therefore, it is of great importance to identifying novel drugs/compounds with an anti-invasive potential, helping to control the metastasis of cancer cells, and hopefully, searching for novel anticancer drugs or compounds.

At present, chemotherapy plays a crucial part in the comprehensive treatment of breast cancer and various types of drugs are implied in the therapy, including docetaxel which can modify tumor phenotype, making tumor cells more amenable to T cell-mediated killing [6]. Paclitaxel has been reported to have a wide variety of anti-tumor activity following in vivo screens in laboratory mice implanted tumors and also found to possess cytotoxic activity in clinical application [7]. Also, doxorubicin is shown to trigger dose-dependent cardiotoxicity by redox cycling as well as the generation of reactive oxygen species [8]. A previous study has demonstrated that docetaxel combined with doxorubicin can double the clinical complete response rate for breast cancer patients diagnosed with negative axillary nodes [9]. Gemcitabine, an antimetabolite drug and a strong and specific deoxycytidine analog, have antitumor activity and tolerability in pancreatic cancer, lung cancer, ovarian cancer, as well as metastatic breast cancer [10, 11]. In addition, different combinations of drugs were often used to strengthen the anti-cancer effects and reduce the side effects. For instance, doxorubicin and cyclophosphamide combination therapy, one of various optional choices, being widespread used in patients with an indication for chemotherapy, is used as an effective therapy for early-stage breast cancer [12]. Moreover, cyclophosphamide, a common anticancer drug for breast tumor, was often used as a compound with other drugs, including cyclophosphamide + methotrexate + 5-fluorouracil (CMF), fluorouracil + doxorubicin + cyclophosphamide (FAC), Doxorubicin + Cyclophosphamide [13]. However, the optimal regime for advanced breast cancer remains undetermined.

A total of 2155 publications were initially retrieved in this study, and 133 for repeated assays, 157 for letters or summaries, 320 for non-human studies, and 319 for non-English papers were eliminated. Moreover, 455 for non-RCT studies, 248 articles unrelated to breast cancer, 512 articles unrelated to chemotherapy, 3 articles without data or incomplete data were also rejected from the rest of 1226 assays. Finally, eight RCTs met the inclusion criteria and were selected into our meta-analysis from 2001 to 2014 [17–24] (Supplementary Figure S1). A total of 2218 patients with metastatic/advanced breast cancer were recruited into meta-analysis, among which the majority of patients were treated with doxorubicin + paclitaxel chemotherapy regimen. Seven RCTs were conducted in the Caucasians, and the other RCT was conducted in the Asians. Furthermore, seven included studies were conducted by two-arm trial, and the rest 1 by three-arm trial. The characteristics of included studies were summarized in Table 1 and Cochrane risk of bias assessment in Figure 1.

Figure 1: More than 2 reviewers evaluated the quality of randomized controlled trial with a modified Cochrane risk of bias assessment tool. 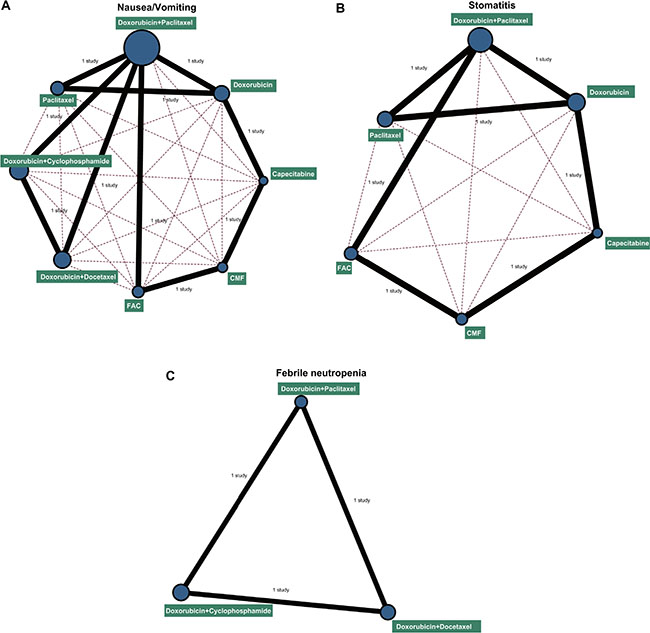 Figure 2: Network diagrams of the incidence of nausea/vomiting, stomatitis and febrile neutropenia. Note: (A) nausea/vomiting; (B) stomatitis; (C) febrile neutropenia; CMF: cyclophosphamide + methotrexate + 5-fluorouraci; FAC: fluorouracil + doxorubicin + cyclophosphamide. The width of the lines is proportional to the number of trials comparing every pair of treatments, and the size of every circle is proportional to the number of randomly assigned participants (sample size).

The nausea/vomiting, stomatitis and febrile neutropenia outcomes were analyzed by discordancy test with the node-splitting method, and the analysis showed that all outcomes of the direct and indirect evidence are consistent, thus the consistency model should be adopted (all P > 0.05) (Table 2).

Table 2 :OR values and P values of direct and indirect pairwise comparisons of eight treatment modalities under three endpoint outcomes 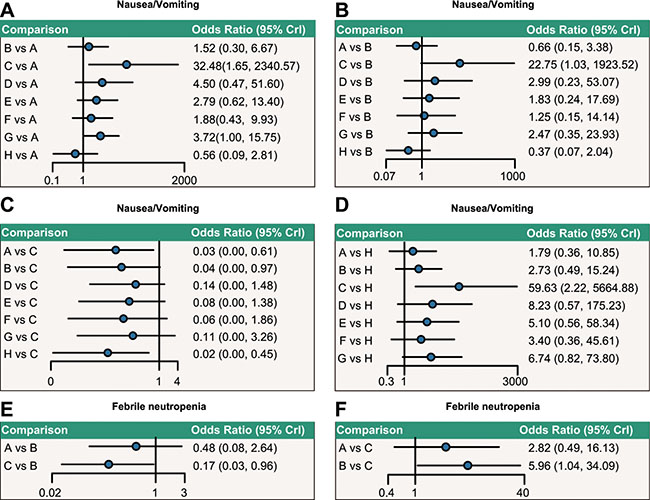 After collecting historical cases and analyzing 8 different chemotherapy regimens for metastatic/advanced breast cancer by pairwise and network meta-analysis, we found evidence that capecitabine regimen showed stronger toxicity in the treatment of metastatic/advanced breast cancer, while the incidence of toxicity of doxorubicin + paclitaxel, doxorubicin, paclitaxel, doxorubicin + docetaxel regimens were relatively lower.

The analysis of pairwise and network meta-analysis consistently indicated that the incidence of toxicity of capecitabine regimen was higher than other regimens during the treatment of metastatic/advanced breast cancer. As an orally administered chemotherapy of fluorouracil, capecitabine shows antineoplasmic activity in various models, which is activated metabolically at the tumor site [25]. Besides, capecitabine is primarily transformed into 5′-deoxy-5-fluorocytidine in the liver, and further into 5′-deoxy-5-fluorouridine (5′-DFUR). Subsequently, 5′-DFUR is metabolized to active 5-FU by thymidine phosphorylase (TP), and higher concentration of TP is present in some tumor tissues in comparison with normal tissues [26, 27]. As several studies indicated, capecitabine treatment has confirmed its efficacy and activity in metastatic/advanced breast cancer [28–31]. However, hand-foot syndrome (HFS), a common side-effect and dose-limiting toxicity, often results from capecitabine treatment for patients with metastatic/advanced breast cancer, which seriously affects patients’ daily activity and life quality [32, 33]. While the pathogenesis of HFS is not completely clear, which may be associated with enzymes involved in capecitabine metabolism, and the high activity of dihydropyrimidine dehydrogenas (DPD) and TP contribute to metabolite accumulation of capecitabine [34]. On the other hand, Saher et al. points out that capecitabine eliminates from the eccrine gland system, thus the increased number of eccrine glands in hand and foot may play a key role in HFS pathogenesis [35]. Meanwhile, Stockler et al. has proven that, although febrile neutropenia, infection, stomatitis, and serious adverse events were more common with CMF, HFS presented higher frequency on metastatic/advanced breast cancer receiving capecitabine treatment than CMF [19].

In our study, we adapted the combined analysis of pairwise and network, and the application of the node-splitting method aimed to verify direct and indirect outcomes, which can compare a variety of interventions, thus more accurate and comprehensive conclusions were obtained [46]. However, it must note that the experiment was relatively single due to small included number of articles and lack of contrast between the cross-research projects, resulting in restriction of universal conclusion. Moreover, with regard to febrile neutropenia, the involved assays did not include doxorubicin, capecitabine, CMF, FAC, and paclitaxel chemotherapy, thus it fail to be analyzed in the calculation of SCRUA value. And nausea/vomiting, the amount of interventions related to nausea/vomiting, stomatitis and febrile neutropenia outcomes were not equal, so the cluster analysis fails to be in progress, which may result in the appearance of subtle bias. Furthermore, other side effects were not included in the study because of insufficient enrolled literatures and chemotherapy incapable of forming rings. Nevertheless, major cases are enrolled in the study, and consistent with the research progress, hence the conclusion has certain value and significance.

Computer-based retrieval in PubMed, the Cochrane Library, and Embase English databases (from inception to January 2016), combined with manual retrieval of related references were performed. Combining the keywords and free words, the searches terms were as followed: chemotherapy, cyclophosphamide, doxorubicin, docetaxel, capecitabine, gemcitabine, advanced breast cancer, as well as RCT.

Two reviewers abstracted the data independently with the unified data collection form, and disagreements were resolved by discussion with a number of investigators. The trial size, trial design, details of intervention including treatment duration, patient characteristics such as sex, age, mean duration of follow-up time as well as outcome data were extracted. For crossover trials, the data was extracted from the first period only in order to avoid possible carryover effects. The means and measures of dispersion were approximated from figures in the reports as previously described whenever necessary. Whenever possible, we extracted results from the intention-to-treat analyses. More than 2 reviewers evaluated the quality of RCT with a modified Cochrane risk of bias assessment tool [48], which included the following 6 domains: random assignment, allocation concealment, blinding of participants, incomplete outcome data, selective outcome reporting, and other sources of bias. The RCT assessment was explicitly evaluated as “yes,” “no,” or “unclear” for each domain to assign a low, high, or unclear risk of bias, respectively. The study was regarded with low risk of bias when one or no domain was defined as “unclear” or “no”, the study was regarded with high risk of bias when four or more domains were defined as “unclear” or “no”, and the study was regarded with moderate risk of bias when two or three domains were defined as “unclear” or “no” [49]. Quality assessment and investigation of publication bias were conducted by Review Manager 5 (RevMan 5.2.3, Cochrane Collaboration, Oxford, UK).

Firstly, pairwise meta-analyses of direct evidence were conducted by the fixed-effects model, with R version 3.2.1 and the meta-package. We also calculated the pooled results of odd ratios (OR) with 95% credible intervals (CrIs) of three end point outcomes. Chi-square test and I-square test were carried out for testing heterogeneity among the studies [50]. Then, R version 3.2.1 and network package were used for drawing the network graph. Besides, each node represented a variety of interventions, the node size represented the sample size, and the lines between the nodes represented the included numbers of research. Also, we implemented a random-effects network meta-analysis with the gemtc package, which modeled the relative effects (e.g.log-odds ratio) responding to a generalized linear model (GLM) under the Bayesian framework by connecting to JAGS, OpenBUGS or WinBUGS as first described by Lu and Ades [51], and improved by others [52, 53]. Subsequently, we also adopted the node-splitting method to evaluate the consistency between direct and indirect evidence, and chosen the consistency or inconsistency model based on the results. If the node segmentation showed that the P value was higher than 0.05, the consistency model was used to analyze the results [54]. In order to facilitate the interpretation of ORs, we calculated the chance of each intervention that was the optimal treatment method on the basis of a Bayesian approach using probability values summarized as surface under the cumulative ranking curve (SUCRA). The higher the SUCRA value, the better the rank of the intervention [55, 56]. R 3.2.1 was conducted for all analyses.

This work was supported by grants from the National Funding Projects of Science and Technology for Public Wellbeing (2013GS500101-05). We would like to thank the reviewers for their valuable advice.

Authors state no conflicts of interests.

14. Jansen JP, Naci H. Naci. Is network meta-analysis as valid as standard pairwise meta-analysis? It all depends on the distribution of effect modifiers. BMC Med. 2013; 11:159.