Lung cancer is the most common cause of cancer-related death worldwide [1]. Non-small cell lung cancer (NSCLC), which encompasses adenocarcinoma, squamous cell carcinoma and large cell carcinoma, accounts for over 80% of all lung cancer cases [2]. Despite years of research, the prognosis for patients with lung cancer remains dismal, and less than 15% of diagnosed patients survive longer than 5 years [3].

Suppressor of cytokine signaling 1 (SOCS1) can significantly induce apoptosis and suppress the growth of lung cancer cells [4]. Suppressor of cytokine signaling 6 (SOCS6) is widely expressed in numerous tissues and is down-regulated in many cancers, including lung, colorectal, gastric, ovarian, stomach, thyroid, hepatocellular, and pancreatic cancer [5]. Reduced copy numbers and mRNA levels of SOCS6 are associated with disease recurrence in primary lung cancer, and thus may serve as useful prognostic biomarkers [6]. In addition, some studies have demonstrated that phosphatase and tensin homolog (PTEN) functions as a tumor suppressor in NSCLC [7, 8]. Although these proteins have been implicated in NSCLC, it is not understood how the genes encoding them are regulated during NSCLC progression.

MicroRNAs (miRNAs) are a class of small non-coding RNAs that post-transcriptionally repress target genes by binding their 3′-untranslated regions (3′-UTRs) [9]. The most frequently amplified miRNAs in lung cancer are miR-21, miR-155, miR-30d, and miR-17 [10], so these miRNAs also may be promising prognostic markers of lung cancer. In particular, the levels of miR-21 and miR-155 can be used to predict recurrence and poor survival in NSCLC [11]. Moreover, the gene expression of the tumor suppressor PTEN is downregulated by several miRNAs in NSCLC, including miR-21, miR-214, miR-205, miR-92, miR-106, and miR-10a [7, 12–16].

While several studies have focused on the correlation of miR-21 or miR-155 with the survival of patients with NSCLC, there has been no report investigating how miR-21 and miR-155 together contribute to the progression of this disease. One important issue that needs to be emphasized is that drug treatments inhibiting miR-21 or miR-155 alone have not significantly inhibited NSCLC progression. We reason that this may be because certain tumor suppressors are targets of both miR-21 and miR-155; thus, when miR-21 alone is inhibited pharmaceutically, the expression of its target genes might not be restored because these target genes are still being suppressed by miR-155, which is highly expressed in cancer cells. Therefore, it is necessary to inhibit both miR-21 and miR-155 in order to restore the function of tumor suppressor genes.

Here, we investigate how miR-21 and miR-155 regulate NSCLC progression by evaluating their binding to predicted target genes, and by testing single and combined inhibitors of these miRNAs for their effects on tumor growth.

According to previous data, miR-21, miR-155 and miR-214 are the most amplified miRNAs in human lung cancer. To investigate whether these miRNAs synergistically induce lung cancer progression by binding to common targets, we compared their predicted targets using the TargetScan database (www.targetscan.org). In total, 419 overlapping targets were identified (Supplementary Figure S1). Notably, the regulation pathways of the predicted targets of miR-21, miR-155 and miR-214 were mostly related to human cancers, including NSCLC (Supplementary Figure S2) (http://cpdb.molgen.mpg.de/). After using other methods of target prediction (www.microrna.org), and taking into consideration the previously reported downregulation of SOCS1, SOCS6 and PTEN in NSCLC, we selected these three genes for further investigation in this study. 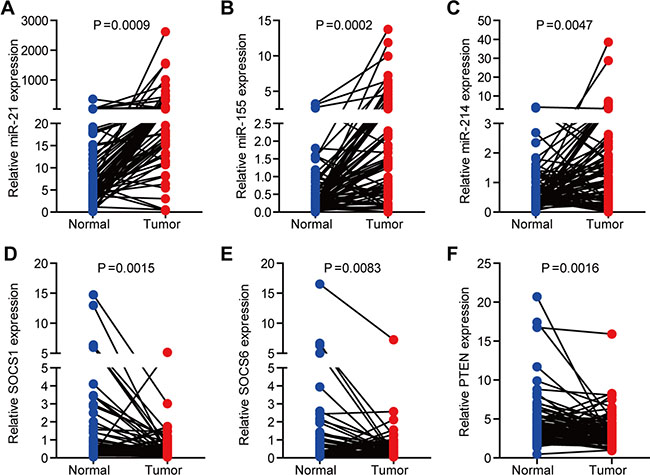 To evaluate the expression of miR-21, miR-155 and miR-214 in different stages of NSCLC, we divided 80 paired human normal and NSCLC samples into three groups according to the disease stage. There were 24, 24 and 32 samples in stages I, II and III, respectively. The expression of miR-21, miR-155 and miR-214 gradually increased as NSCLC progressed (Figure 2A–2C), whereas the gene expression of SOCS1, SOCS6, and PTEN gradually decreased (Figure 2D–2F). Furthermore, in a target prediction analysis, the regulatory networks of miR-21, miR-155, miR-214, miR-21/155/214 included overlapping targets with different patterns (Supplementary Figure S3). For example, miR-155 had a more complicated regulatory network than miR-21 or miR-214 (Supplementary Figure S3B). In addition, miR-21 was more profoundly upregulated than miR-155 or miR-214 in NSCLC (Figure 2A–2C). Accordingly, the expression of PTEN was repressed more significantly than the expression of SOCS1 or SOCS6 (Figure 2D–2F).

Correlation between the expression of miR-21, miR-155, miR-214, and their target genes, SOCS1, SOCS6, and PTEN, in 80 clinical NSCLC samples 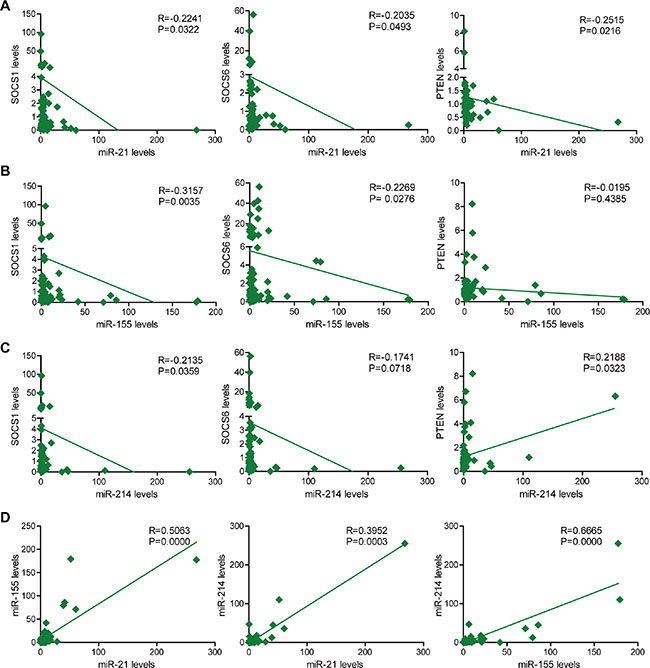 Direct downregulation of SOCS1, SOCS6, and PTEN expression by miR-21 and miR-155 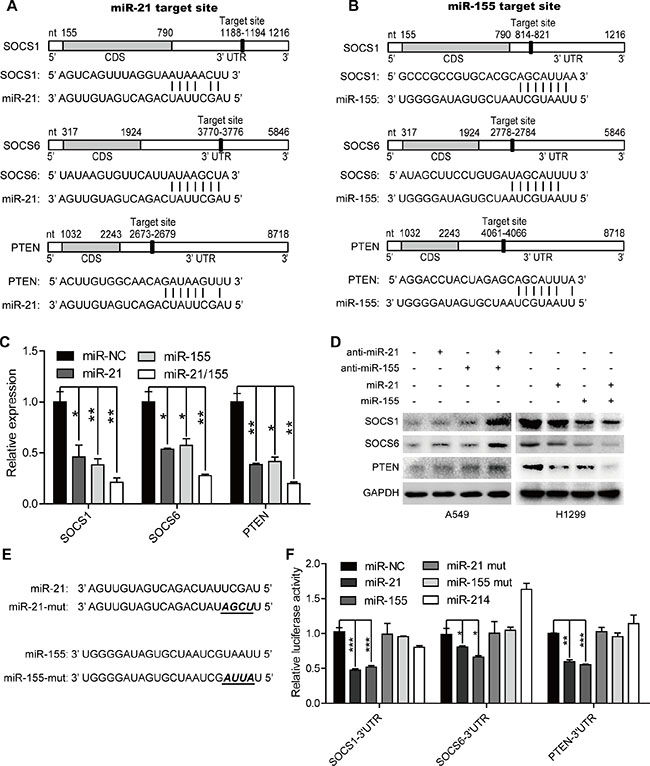 Given that SOCS1, SOCS6, and PTEN are known to be critical tumor suppressors, we reasoned that restoring their expression by downregulating miRNA expression could be a good cancer treatment strategy. Treatment with miR-21 and miR-155 antisense sequences induced the apoptosis of A549 and H1299 cells (Figure 5A). In addition, the cell proliferation rate of A549 and H1299 cells was significantly inhibited, as shown by their reduced cell numbers, viability, and colony formation (Figure 5B–5D). Furthermore, tumor growth was suppressed in mice injected with A549 cells transfected with miR-21, miR-155, or miR-21/155 antagomirs (Figure 5E–5F). Accordingly, elevated protein levels of SOCS1, SOCS6, and PTEN were detected in xenografted tumors from cells treated with miR-21, miR-155, or miR-21/155 antagomirs (Figure 5G). Notably, combination treatment with miR-21 and miR-155 inhibitors was more effective than treatment with a single miRNA inhibitor (Figure 5E–5G, Supplementary Figure S4). Correspondingly, we found that many cancer-related pathways, including those involved in NSCLC, are connected to the common targets of miR-21 and miR-155 (Supplementary Figure S5). These data indicate that miR-21 and miR-155 are major promoters of tumor cell growth in vitro and in vivo. 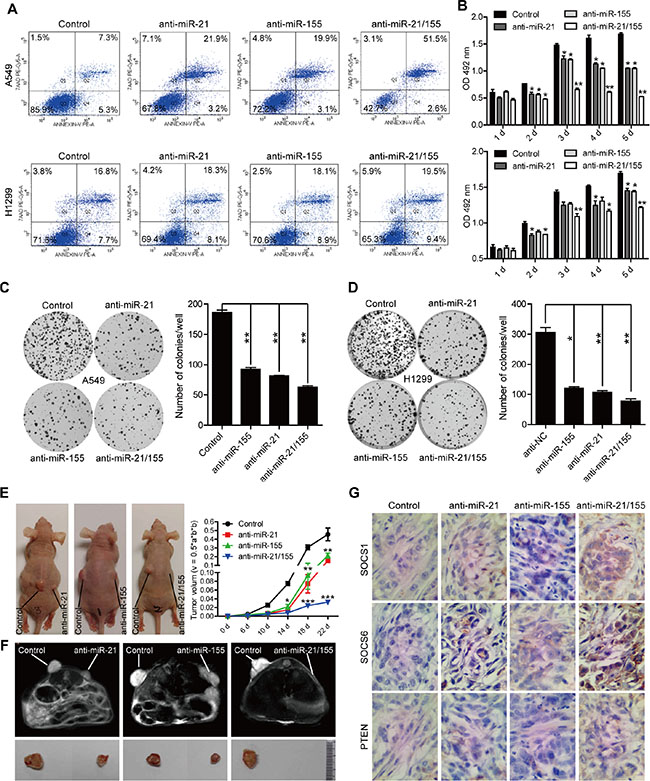 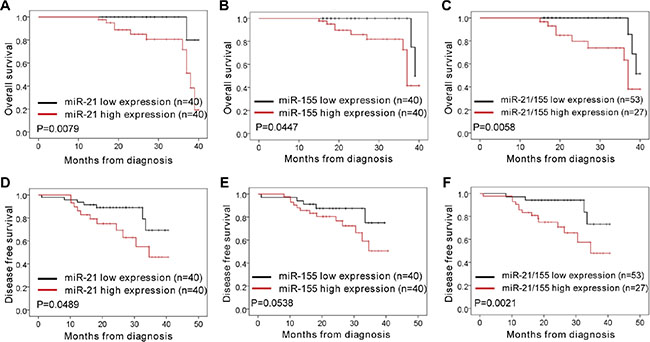 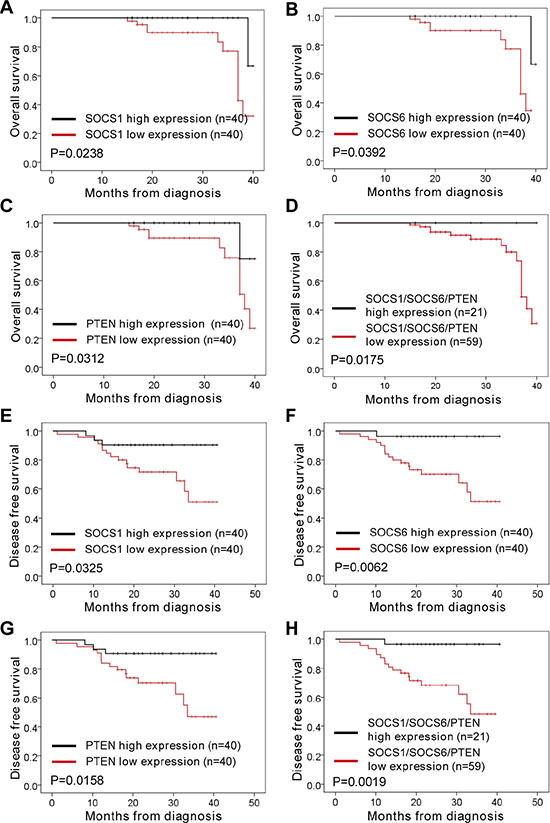 SOCS1, SOCS6 and PTEN have been identified as tumor suppressors in a broad range of human malignancies, including NSCLC [5–8, 16, 21–27]. A previous study indicated that SOCS1 is an evolutionarily conserved target of miR-155 in breast cancer cells [28]. Zhang et al. found that miR-21 promotes the development of NSCLC by suppressing the PTEN signaling pathway [29]. In addition, Li et al. discovered a novel miR-21-SOCS6 axis, which might be an important way that miR-21 promotes the growth and invasion of HCC cells [30]. However, it was not certain whether miR-21 or miR-155, alone or in combination, inhibit gene expression relevant to NSCLC progression. It was even less clear whether they achieve such effects by inhibiting SOCS1, SOCS6, or PTEN. Here, we demonstrated that the gene expression of SOCS1, SOCS6, and PTEN can be downregulated by miR-21 or miR-155 alone, in a direct manner. We also demonstrated that combined treatment with miR-21 and miR-155 inhibitors or mimics more strongly affected target gene expression than single miR-21 or miR-155 inhibitors or mimics, in both A549 cells and H1299 cells (Figure 4, Figure 5). Furthermore, the survival rate was significantly lower among patients with high expression of both miR-21 and miR-155 than among patients with high expression of either miR-21 or miR-155 alone (Figure 6C, 6F).

As mentioned above, our comprehensive analysis of target genes revealed that miR-21 and miR-155 share nearly 30% of their targets. Pathway analysis demonstrated that most of the common target genes were related to cancer, including NSCLC. A previous report indicated that miR-214 regulates the acquired resistance to gefitinib in HCC827 via the PTEN/AKT signaling pathway [13]. However, our results demonstrated that miR-214 does not regulate the expression of PTEN, SOCS1, or SOCS6 (Figures 3C and 4F). This discrepancy may be due to differences in experimental approaches or cell systems.

In conclusion, our findings have revealed that miR-21 and miR-155 promote the development of NSCLC by downregulating SOCS1, SOCS6, and PTEN. How miR-21 and miR-155 regulate the expression of other target genes in the progression of NSCLC or in a broad scope of cancers remains to be investigated in the near future.

Eighty paired normal and NSCLC tissues were obtained from Shanghai 10th People’s Hospital for diagnostic purposes. The local ethics committee approved the study, and the regulations of this committee were followed. Written consent was obtained from patients.

Male BALB/c nude mice were purchased from Beijing Vital River Laboratory Animal Inc., Beijing. All animals were housed and maintained under pathogen-free conditions. All animal experiments were performed in compliance with the guide for the care and use of laboratory animals and were approved by the institutional biomedical research ethics committee of the Beijing Institutes for Biological Sciences, Chinese Academy of Sciences.

Human NSCLC cell lines, A549 and H1299, were purchased from ATCC. Cells were cultured in RPMI1640 or DMEM containing 10% fetal bovine serum (HyClone) and 1% penicillin/streptomycin (Invitrogen).

Transfection of cell lines was performed with Lipofectamine 2000 reagent (Invitrogen), according to the manufacturer’s instructions. To inhibit or overexpress miR-21 and miR-155, we transfected 100 nM antisense or mimic sequences (respectively) of miR-21, miR-155 or both (miR-21/155) into A549 or H1299 cell lines for 48 hours. Human SOCS1, SOCS6 and PTEN3′-UTR sequences were cloned into a psiCHECKTM-2 vector.

Total miRNAs were isolated from cultured cells or surgically resected from fresh NSCLC tissues with a mirVana miRNA Isolation Kit (Ambion) in accordance with the manufacturer’s instructions. Total RNAs were isolated from cell lines with TRIzol Reagent (Invitrogen, 15596-018) as described in the manufacturer’s protocols. To obtain cDNA, we performed a reverse transcription reaction with Transcript First Strand Synthesis Supermix (TransGen Biotech, AT301) according to the manufacturer’s instructions, using 1 μg total RNAs as the template. For miRNA, 0.5 μg total RNA from each sample was reverse-transcribed to cDNA by means of specific miRNA stem loop primers. All quantitative real-time reverse transcription PCR (qRT-PCR) was performed on a 7500 Fast Real-Time PCR System (Applied Biosystems), and all qRT-PCR reagents and consumables were purchased from Applied Biosystems and TaKaRa. The mRNA and miRNA levels were quantitatively assessed by SYBR Green-based qRT-PCR with gene-specific primers. The sequences of primers are listed in Supplementary Table S1. GAPDH and U6 were used as internal normalization controls.

In the 3′-UTR reporter assay, H1299 cells were grown to 80%–90% density in 24-well plates and transfected with 100ng of the psiCHECKTM-2-SOCS1-3′-UTR, psiCHECKTM-2-SOCS6-3′-UTR, or psiCHECKTM-2-PTEN-3′-UTR, along with 100 nM of various mimics (Genepharma) and 1 μl of Lipofectamine 2000. Lysates were harvested 48 hours after transfection, and reporter activities were measured with a Dual Luciferase Assay (Promega) according to protocols supplied by the manufacturer.

Cells were seeded in six-well plates at a density of 1 × 105 cells/well. After 48 hours, the cells were detached with 0.25% trypsin and washed. PE-AnnexinV (BD Biosciences) and 7-AAD (BD Biosciences) were added for 30 minutes at 4°C in the dark prior to flow cytometry analysis. The data were analyzed with FlowJo 7.6 software (TreeStar, Inc.).

A total of 1 × 103 cells were seeded in 60-mm cell culture dishes. After 10 days, cells were stained with Crystal Violet Staining Solution (Beyotime, C0121), and colonies containing ≥ 20 cells were counted. Representative colonies were photographed with a Canon EOS 50.

All experimental procedures were approved by the Institutional Animal Care and Use Committee of the Central Laboratory of Beijing Shijitan Hospital, Capital Medical University. BALB/c nude mice (6–7 weeks of age, 18–20 g, male) were randomly divided into three groups (n = 6 per group). Negative control miRNA (miR-NC), miR-21, miR-155, or miR-21/155 antagomirs (all at 100 nM concentration) were first transfected into A549 cells for 48 hours. Then, 1 × 106 transfected cells in 0.1 mL of medium were subcutaneously injected into the mice at left or right back area. The mice were sacrificed 3–4 weeks after injection, and tumors were removed, fixed, and processed for sectioning.

The authors have no conflicting financial interests.