Lung cancer is the leading cause of cancer-related death in the world [1]. Non-small cell lung cancer (NSCLC) accounts for up to 80–85% of lung cancer [2]. When first diagnosed, most of the lung cancer patients have advanced stage, so that patients have little effective treatment, and this presents five years survival rates of less than 15% [3, 4]. Several tumor markers such as carcinoembryonic antigen (CEA), cytokeratin 19 fragment (CYFRA21-1), and neuron-specific enolase (NSE) have been used as biomarker for lung cancer. Nevertheless, none of them showed satisfactory for diagnosis because of their low sensitivity and specificity. Hence, biomarkers for diagnosis and prognosis of lung cancer are urgently needed [5].

Periostin, a secreted matrix N-glycoprotein, which is a component of NH2-terminal signal peptide sequence, internal homologous repeats, cysteine-rich domain, and hydrophilic COOH-terminal domain [6, 7]. Previous studies showed that periostin was overexpressed in various human tumors [8–11]. Many studies have indicated that periostin overexpression or raised serum periostin level is associated with poor patient outcomes [12, 13]. Periostin is overexpressed in lung cancer tissues and associated with the prognosis [14–16], but the correlation between serum periostin and NSCLC progression, as well as the effects of periostin on survival of NSCLC, has not been fully assessed.

In the present study, we explored the correlation between serum periostin and clinicopathological variables and patient survival. Our results showed that the evaluation of serum periostin could be a valuable biomarker for NSCLC. 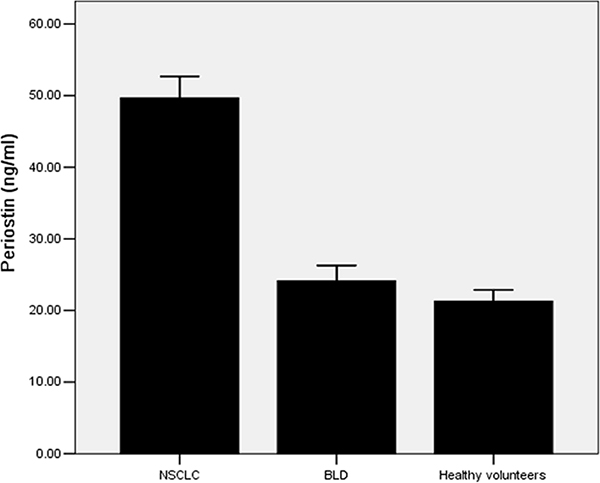 To evaluate the value of serum periostin as a marker, ROC curves was applied to calculate the sensitivity and specificity of this marker in separating NSCLC patients from healthy controls and BLD patients. As shown in Figure 2, an area under the curve (AUC) value for serum periostin reached 0.867 and 0.846, respectively. Using a cutoff value of 30.87 ng/ml, the sensitivity and specificity of serum periostin in differentiating between NSCLC patients and BLD patients, and between NSCLC patients and healthy controls was, 48.6 and 91.7%, and 51.4 and 97.5%, respectively. These results showed that periostin was a worthy diagnostic marker for NSCLC.

Table 2: Serum levels of periostin in the three groups and clinical features in the NSCLC group

Periostin is overexpressed in various types of cancer tissues and may affect some aspects of biology, such as tumor angiogenesis, invasion and metastasis [17, 18]. Previous studies have showed that periostin has been upregulated in NSCLC tissue, however, these studies were restricted to quantitative polymerase chain reaction or immunohistochemical assessment of periostin expression and did not concern its serum levels [14, 15, 19]. In the present study, we found that serum periostin levels were increased in NSCLC patients compared with BLD patients or healthy controls. Using a cutoff value of 30.87 ng/ml, serum periostin showed a valuable biomarker for separating NSCLC patients from BLD patients and the individuals. These data reinforced the diagnostic value of periostin levels in NSCLC. The diagnostic value of periostin in combination with CEA was also analyzed. The results indicated that combined detection of these two markers had a better diagnostic value than periostin or CEA alone. This may offer a new method in differentiating NSCLC patients and the controls.

In the present work, we observed that there was a significant correlation between serum periostin levels and NSCLC patients survival. Our results indicated that high periostin was significantly associated with a decreased PFS and OS in univariate analysis. This relationship was further demonstrated in the survival curves. Multivariate analysis also showed that periostin was an independent prognostic factor for NSCLC, which is in line with the data reported for tissue periostin expression using immunohistochemical techniques [14, 19]. The prognostic utility of tissue periostin expression has also been established in other malignancies [21, 22]. Concerning the circulating periostin levels, there was strong evidence that serum level of periostin in NSCLC and colorectal cancer patients is significantly elevated [20, 23].

In conclusion, increased serum periostin levels were significantly associated with poor prognosis. Our study provides evidence that periostin can be considered of diagnostic and prognostic utility in NSCLC.

The study protocol was approved by the ethics committee of Nanjing Chest Hospital. All patients provided written informed consent before enrollment.

Serum samples from each individual were obtained at the time of diagnosis, before any therapeutic measures were started. Samples were centrifuged at 1500 × g for 10 min at –4°C. The supernatant was stored at –80°C. The periostin levels were determined by ELISA with the commercial periostin ELISA Ready-SET-Go kit (eBioscience, San Diego, CA). The levels of CEA were measured by electrochemiluminescence immunoassays on Roche Elecsys 1010 analyzer (Roche Diagnostics; Mannheim, Germany). The upper normal limit for the CEA is 5 ng/ml. All samples were blinded to the technologists running the assays, and the code was broken to the statisticians after the database was constructed.

Statistical software (SPSS for Windows, version 18) was used for the analysis. Differences between independent groups were examined by the Mann-Whitney U test. To determine the diagnostic accuracy of periostin, receiver operating characteristic (ROC) curves was retrieved from logistic regression analysis and the area under the curve (AUC) was calculated. Univariate survival analysis was performed using the Kaplan-Meier method and the log-rank test. Multivariate analysis was conducted to determine an independent impact on survival using the Cox proportional hazard method. P < 0.05 was considered statistically significant.

The authors declare no any conflicts of interest in this work.