Objective: A network meta-analysis was conducted comparing the short-term efficacies of 16 targeted drugs in combination with chemotherapy for treatment of advanced/metastatic colorectal cancer (CRC).

Colorectal Cancer (CRC) is a malignant disease of worldwide concern mainly affecting the elderly with a general onset age of 66 years old [1]. According to the World Cancer Report, there were 694,000 CRC deaths in 2012 [2]. The survival rate for CRC in a 5-year period increased from 51% to 65% due to developments in medical science and treatment methods, but fatal metastatic CRC remains is significant threat to public health [3]. Currently, surgical resection combined with chemotherapy is the frontline treatment for CRC; however, chemotherapy remains flawed, as the desired therapeutic effects are achieved in only 30% of patients. This might be due to the fact that conventional chemotherapy drugs are toxic to both tumor and normal tissues, and therefore cause a variety of side effects, including neutropenia, anemia, stomach poisoning disease, hematopoietic disorders and poisoning stem cells [4]. The application of drugs specifically targeting tumor tissue would reduce the interference to normal tissues and decrease side effects [5].

Current targeted drugs can be roughly divided into the following categories: (1) drugs that inhibit VEGF-related factors to reduce angiopoiesis, including bevacizumab [6], cediranib [7], axitinib [8], and sorafenib [9]; (2) drugs that inhibit EGFR-related factors to control tumor cell proliferation and differentiation, including cetuximab [10], panitumumab [11], and gefitinib [12]; (3) drugs that inhibit angiopoietin, including sunitinib [13], celecoxib [14], and trebananib [15]; and (4) drugs that inhibit tumor proliferation though other relevant pathways, e.g. conatumumab causes apoptosis of cancer cells by targeting DR5 [16] and ganitumab inhibits tumor cell proliferation by inhibiting IGF signaling [17]. Combined treatment with anticancer drugs from different chemotherapy regimens is also commonly used. A previous study demonstrated that sunitinib-based combination was associated with more toxicity, and combination therapy with sunitinib plus mFOLFOX6 was not recommended in patients with metastatic colorectal cancer [18]. Moreover, the combination use of sorafenib in combination with mFOLFOX6 chemotherapy regimen was not preferable in metastatic colorectal cancer [19]. Despite the abundant literature submitted, no comprehensive literature regarding the optimal strategy on combined targeted drugs with chemotherapy in colorectal cancer was available.

The study of targeted drugs is based on clinical data from long-term evaluation of patients, for which the selection of methodology is an important factor affecting research conclusions [20]. Meta-analysis is a commonly used clinical analytical tool; with sufficient data its conclusions are normally reliable. However, traditional meta-analysis is often applied to paired comparison, in which case, the conclusions often less accurate [20]. Network meta-analysis can make up this deficiency, implementing a direct and indirect quantified comparison of different treatments with similar disease interventions and then selecting the optimal treatment [21]. This study integrates the research data of 16 targeted drugs combined with chemotherapy for the treatment of advanced/metastatic CRC, attempting to uncover the best treatment options for advanced/metastatic CRC through network meta-analysis. 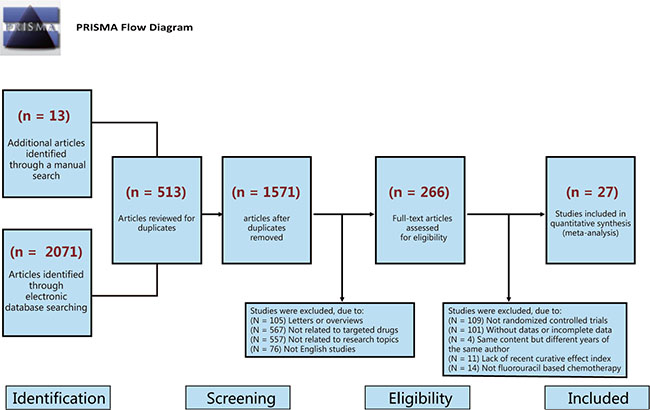 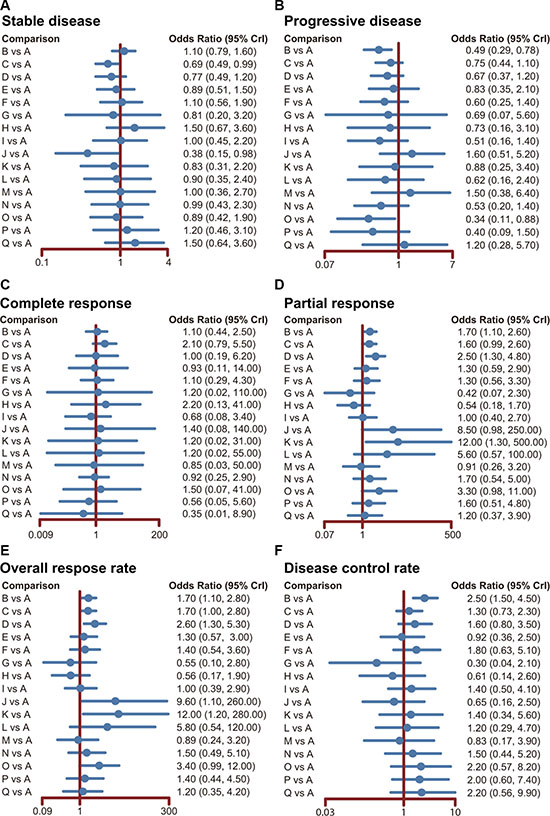 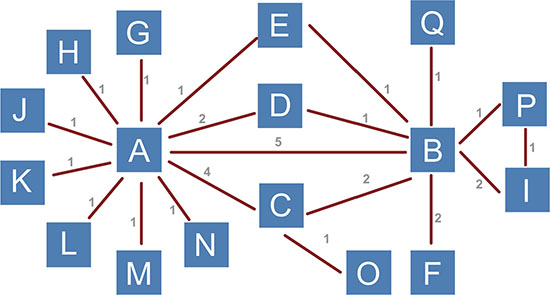 Table 1: OR values and P values of direct and indirect pairwise comparisons of seventeen treatment modalities under six endpoint outcomes

Table 2: The results of surface under the cumulative ranking curve of 16 targeted drugs 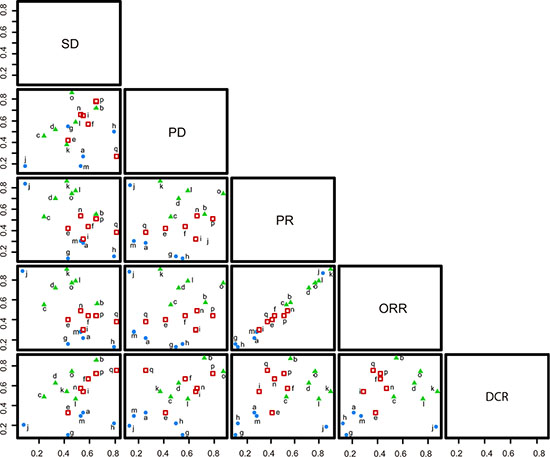 Integrating currently available data, current network meta-analysis of targeted drug therapy proved that the efficacies of the combined therapies were better than the efficacy of chemotherapy alone. Our results showed that the efficacy of bevacizumab + chemotherapy, sorafenib + chemotherapy, panitumumab + chemotherapy, trebananib + chemotherapy and conatumumab + chemotherapy were more prominent among all the combined chemotherapies. Evidence supported that monoclonal antibody-based treatment of cancer has been proved as one of the most successful therapeutic strategies for both hematologic malignancies and solid tumors [47, 48]. Several antibodies were included as targeted drugs in current study, including bevacizumab and conatumumab. Bevacizumab is an anti-VEGF monoclonal antibody, which has a good efficacy and can prolong the survival time of advanced/metastatic CRC patients [23–24]. Sorafenib is a multi-targeted tyrosine kinase, which can control angiogenesis by inhibiting the VEGF receptor, effective for the treatment of tumors [29]. Besides, the combined therapy of trebananib with anti-VEGF drugs, such as sorafenib, bevacizumab or motesanib, presented with apparently less toxicity and more effective in inhibiting the proliferation of tumors cells [49, 50]. Conatumumab is a monoclonal antibody which targets at DR5 and thus mediates the apoptosis of tumor cells with low toxicity to normal cells [19, 27, 51]. Conatumumab is a relevant factor that can cause apoptosis of the tumor cells and can be applied with combination of 5-fluorouracil, leucovorin and irinotecan. The combination of these agents can reduce the toxic effects of the body and thus distinctively mediate the apoptosis of tumor cells [52]. Consistent with these findings, the results of this study showed that the efficacies of bevacizumab + chemotherapy, panitumumab + chemotherapy, conatumumab + chemotherapy and trebananib + chemotherapy were relatively more significant than the efficacy of chemotherapy alone. Panitumumab is a complex which inhibits the expression of downstream molecules indirectly by binding to EGFR, so as to inhibit the proliferation and differentiation of tumor cells [24]. Trebananib is a peptide hybrid protein, which can deter the formation of tumors by interfering with the binding of angiopoietin-1 and angiopoietin-2 to Tie2 receptor [28].

Further analysis of the results of SUCRA revealed that the efficacies of trebananib + chemotherapy, conatumumab + chemotherapy, and ganitumab + chemotherapy are relatively higher in regard to PR and ORR. This may due to the fact that the included documents and data are relatively limited, which may result in a deviation of the results. Another reason may be the exclusion criteria based on the analysis of pharmacological effects. As mentioned earlier, trebananib is effective in inhibiting the angiogenesis-related pathway in tumor cells [49, 50]. Ganitumab inhibits the IGF signaling pathway by binding to IGF1R and thus inhibits proliferation of tumor cells. Although limited data on the efficacy of ganitumab combined with other drugs exists, clinical research shows that combined therapy of panitumumab and rilotumumab is much more efficacious than ganitumab therapy alone [55]. Thus, the actual efficacy of ganitumab therapy requires further study.

Two reviewers extracted data from the enrolled studies using a specifically designed form. Additionally, a third reviewer was consulted if agreement could not be reached between these two reviewers. Two or more researchers reviewed the RCTs according to Cochrane risk of bias assessment tools [58], which includes six domains: adequate sequence generation, allocation concealment, blinding, incomplete outcome data addressed, free of selective reporting, and free of other biases.

We would like to acknowledge the helpful comments on this paper received from our reviewers.

47. Lee CM, Tannock IF. The distribution of the therapeutic monoclonal antibodies cetuximab and trastuzumab within solid tumors. BMC Cancer. 2010; 10:255.

61. Salanti G. Indirect and mixed-treatment comparison, network, or multiple-treatments meta-analysis: many names, many benefits, many concerns for the next generation evidence synthesis tool. Res Synth Methods. 2012; 3:80–97.