Although Fibroblast growth factor receptor (FGFR) 2 gene amplification and its prognostic significance have been reported in resectable gastric cancers, information on these features remains limited in the metastatic setting. The presence of FGFR2 amplification was assessed in formalin-fixed, paraffin-embedded tissues using a quantitative PCR-based gene copy number assay with advanced gastric cancer cohorts. A total of 327 patients with tumor portion of ≥70% were analyzed for clinical features. Among these patients, 260 who received first-line fluoropyrimidine and platinum chemotherapy were analyzed for survival.

Although FGFR2 amplification is associated with poorer OS, it does not appear to be an independent prognostic predictor in patients with advanced gastric cancer treated with palliative fluoropyrimidine and platinum chemotherapy.

The regulation of the fibroblast growth factor (FGF) signaling pathway is important for normal growth control, and the genetic alteration of the FGF receptor (FGFR) reportedly enhances downstream signaling and is related to tumorigenesis [15, 16]. In particular, an increase in the FGFR2 copy number was reported in cases of breast cancer [17, 18] and poorly differentiated gastric cancer [19, 20]. Furthermore, a few studies examined the clinicopathologic features of FGFR2-amplified gastric cancer and showed that FGFR2 amplification was associated with poorer prognosis [21-23]. Accordingly, FGFR2 amplification was considered as a reasonable treatment target and predictive biomarker for small molecule tyrosine kinase inhibitors or antibodies to FGFR2, including dovitinib, BGJ398, Ki23057, AZD4547, and GP369 [24-28]. However, previous studies on gastric cancer were conducted in patients with localized resectable gastric cancer. Hence, these findings cannot be directly applied to patients with recurrent or unresectable gastric cancer who are indicated for palliative chemotherapy.

Fluorescence in situ hybridization (FISH) is considered as the standard method for detecting gene amplification. However, due to the high cost and long procedure duration of FISH testing, real-time quantitative polymerase chain reaction (qPCR)-based gene copy number assay was suggested as a possible alternative to detect FGFR2 amplification [21, 29]. In our previous study, we showed that the FGFR2/CEP10 ratio, determined via FISH, were very well correlated with the results of the qPCR-based gene copy number assay, with a cut-off value of 8 for FGFR2 amplification [29].

In the present study, we aimed to investigate the association of FGFR2 amplification with the clinicopathologic features and prognostic significance in patients with unresectable gastric cancer treated with fluoropyrimidine and platinum (FP) as first-line chemotherapy. Moreover, we assessed the FGFR2 amplification status by using qPCR, a sensitive but less expensive method.

The formalin-fixed paraffin-embedded (FFPE) samples of a total of 327 patients had a tumor portion of > 70%, and were adequate for analyzing the relationship between FGFR2 amplification and clinicopathologic factors. The patients had a median age of 58 years (range, 23-85 years); moreover, 68.8% of patients had initially metastatic disease, whereas the remaining presented with recurring and locally advanced unresectable disease. At the time of diagnosis, 288 (88.1%) patients had an Eastern Cooperative Oncology Group (ECOG) performance status of 0-1 (Table 1). The median copy numbers on FGFR2 qPCR was 2.64 (range, 0.73-504.04) and the frequency of FGFR2 amplification was 4.9% (n = 16) (Figure 1).

dAlbumin levels were not available in 11 patients (3.4%)

Figure 1: FGFR2 copy numbers determined with a quantitative PCR-based assay in metastatic or locally advanced gastric cancer. FGFR2 copy number of ≥ 8 was observed in 16 cases and 9 data points are outside the axis limits on this graph.

Association between FGFR2 amplification and the clinicopathologic features

Table 2: Relationship between c amplification and the clinicopathologic features (n = 327)

cAlbumin levels were not available in 11 patients (3.4%) 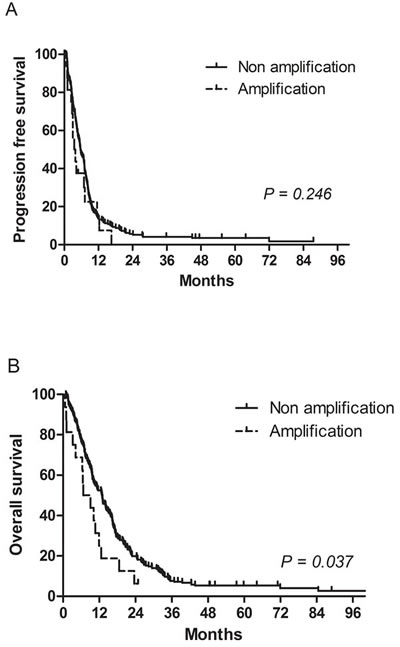 Previous studies have reported that the FGFR2 protein was overexpressed by immunohistrochemistry (IHC) in 30-40% of gastric cancer patients undergoing curative resection [33, 34], although the incidence of FGFR2 gene amplification was only 4-10 % in cases of resectable gastric cancer [21-23, 26, 35] and 4.4-11.5% in cases of unresectable gastric cancer [31, 32]. Our frequency of FGFR2 amplification was consistent with that described in previous reports. The discordance in the reported incidences between protein expression and gene amplification could be explained by the heterogeneous amplification of FGFR2 in tissues or the varied antibodies and standard protocols used for IHC [29].

Because some patients in the present study were diagnosed before 2012, we were unable to obtain information regarding HER2 expression or amplification in these cases. After conducting a cross-correlation analysis to assess the association between FGFR2 and HER2 amplification, while allowing for the missing data, we found that these 2 factors were not related (data not shown). In fact, none of our patients presented with both FGFR2 and HER2 amplification, consistent with previous reports that have described the mutual exclusivity of these conditions [22, 32, 35, 37, 38].

Su et al. reported that FGFR2 amplification was more frequently observed in gastric cancer patients with a higher N stage and poorly differentiated histology [22]; these factors are considered to contribute to the development of recurrence and poor prognosis in FGFR2-amplified resectable gastric cancer. Although it can be reasonably assumed that FGFR2 amplification is a negative prognostic indicator in patients with resectable gastric cancer [21-23], these results cannot be applied to metastatic or locally advanced unresectable gastric cancer, as noted in the present and recently published studies [31, 32]. By using FISH testing, Shoji et al. showed that FGFR2-amplified gastric cancer patients in the palliative setting tended to have a shorter survival period. Even though the enrolled patients were treated with a heterogeneous treatment regimen, including trastuzumab or triplet regimens, the authors found a relationship between FGFR2 amplification and poor OS, which was significant on univariate analysis but was not significant on multivariate analysis [31]. More recently, Matsusaka et al. also reported no significant correlation between survival outcomes and FGFR2 amplification when using an arbitrarily determined cut-off value (copy number of 5) on qPCR [32]. Our current finding is consistent with those of previous studies, but we validated the reasonable cut-off value of a copy number of 8 on qPCR reported in our previous study to predict amplification via FISH [29]; hence, this study could suggest a more solid conclusion. In addition, our present study included the largest number of patients who received homogenous treatment, and could hence reliably indicate the survival outcome.

Although FISH is considered the standard method for the diagnosis of gene amplification, the qPCR-based gene copy number assay has been found to be a reasonable alternative for detecting FGFR2 amplification [21, 29]. For qPCR of the FGFR2 gene in tissues with a tumor portion of < 70%, microdissection will be needed. However, the qPCR-based method is less expensive and has comparable sensitivity, and can hence be adopted for broad practical use. We believe our current results were also reliable and applicable in practice.

In conclusion, FGFR2 amplification is not an independent prognostic predictor in patients with metastatic or locally advanced gastric cancer treated with palliative FP. Further validation is warranted to obtain a better clinical understanding of FGFR2 amplification in patients with gastric cancer treated with palliative chemotherapy.

Between June 2006 and December 2014, we screened 1367 patients who received palliative chemotherapy for metastatic or locally advanced unresectable gastric cancer and were registered in a single tertiary center gastric cancer registry. After a histological review, a total of 327 patients who had sufficient tissue specimens for qPCR and specimens comprised of ≥ 70% of tumor portion form pretreatment biopsied or surgically obtained FFPE tissues were selected for the analysis of the clinicopathologic features of FGFR2-amplified gastric cancer. Among these patients, 260 who were treated with first-line FP chemotherapy were analyzed for the prognostic impact of FGFR2 amplification. The medical records of all these patients were reviewed. This study adhered to the guidelines established by the declaration of Helsinki, and was approved by our institutional review board.

Genomic DNA extraction, DNA concentration measurement, and real-time qPCR for determining the gene copy number of FGFR2 were conducted in a similar manner as in our previous study [29]. Genomic DNA was extracted from biopsy specimens or surgical FFPE tissues using a QIAamp DNA FFPE Tissue kit or QIAamp DNA Mini kit (Qiagen, Hilden, Germany). The DNA concentration was measured using the NanoDrop 2000 spectrophotometer (Thermo Scientific, Waltham, MA). To determine the gene copy number of FGFR2, pre-designed TaqMan Copy Number Assays were used (Applied Biosystems). For real-time PCR, we prepared a total volume of 10 µL of master mixture, which contained 10 ng of genomic DNA, 5 µL of TaqMan genotyping master mix, and each primer. The primer IDs were HS05182482_cn (intron 14 and 15) and Hs05114211_cn (intron 12). The telomerase reverse transcriptase (TERT) gene and human genomic DNA (Takara) were used as internal references for the copy number and normal control, respectively. The thermal cycling conditions were as follows: 10 min at 95ºC, followed by 40 cycles of 15 s at 95ºC and 60 s at 60ºC. The results were analyzed using the ABI PRISM 7900HT Sequence Detection System (Applied Biosystems).

To analyze the relationship between FGFR2 amplification and the clinical features and survival outcomes of gastric cancer, the patients were classified as having FGFR2 amplification based on the presence of an FGFR2 qPCR gene copy number of ≥ 8, according to our previous study [29]. PFS was defined as the duration between the start of FP chemotherapy and tumor progression or death by any cause. Moreover, OS was estimated from the date of the initial first-line FP session until death by any cause. Data were censored if the patients were free of progression or alive at the final follow-up. Categorical variables were evaluated using the chi-square test or Fisher’s exact test, as appropriate. The Kaplan-Meier method was used to estimate PFS and OS. Survival curves were compared using the log-rank test according to FGFR2 amplification. By multivariate analysis, the Cox proportional hazard model was used, and we included potent prognostic factors: ECOG Performance Status ≥ 2, no gastrectomy, peritoneal metastasis, bone metastasis, lung metastasis, ALP > 120 IU/L, albumin < 3.3 g/dL, and total bilirubin > 1.2 mg/dL [30].

All statistical analyses were performed using the Statistical Package for the Social Sciences version 21 (IBM Co., Armonk, NY). All tests were two-sided with 5% defined as the level of significance.

This research was supported by a grant from the Korea Health Technology R&D Project through the Korea Health Industry Development Institute (KHIDI), funded by the Ministry of Health & Welfare, Republic of Korea (grant number: HI12C1785).

Y-K Kang received a research grant from Bayer, Daehwa, Novartis, Ono, Roche, and Taiho. The other authors declare no conflict of interest.