5These authors contributed equally to this work

Breast cancer (BC) is the most frequently diagnosed cancer and the second leading cause of cancer-related death among American women [1, 2]. BC incidence has increased in China in recent decades and outcomes for patients with metastatic disease remain poor, with a median overall survival time of two to three years [3, 4]. A lack of effective treatment options, which rely heavily on timely diagnosis, contributes to poor survival in early-stage BC patients [5]. Novel biomarkers are urgently needed to detect early stage BC. However, many identified biomarkers [6–8], such as cancer antigen-199 (CA199), carcinoembryonic antigen (CEA), and cancer antigen-125 (CA125), have little clinical value due to low sensitivity, specificity, and reproducibility. Still, serum RNAs and proteins found to correlate with tumor status and/or patient survival are increasingly being applied as diagnostic and prognostic indicators in various carcinomas. Thus, detection of circulating proteins represents a promising noninvasive strategy for tumor diagnosis and prognosis, and for monitoring antitumor therapies.

Metastasis-associated in colon cancer-1 (MACC1), a newly identified gene first detected in colorectal cancer, is suggested to transcriptionally regulate c-Met [9]. MACC1 promotes human gastric cancer cell proliferation and invasion [10–12], and is overexpressed in diverse human malignancies, including BC [13–16]. A previous study associated MACC1 polymorphisms with HER2-positive BC patient clinical outcome, suggesting that MACC1 is a potential BC biomarker [17]. However, the association between BC and serum MACC1 levels has not yet been investigated.

Stable, repeatable, noninvasive molecular marker measurements could improve diagnostic and prognostic accuracy in cancer patients, and enable improved treatment decision-making [18, 19]. Based on previous findings, we hypothesized that serum MACC1 levels hold diagnostic and prognostic value in BC. In the current study we retrospectively examined serum MACC1 status in BC patients, patients with benign breast tumors, and healthy volunteers to assess the value of MACC1 as a biomarker. 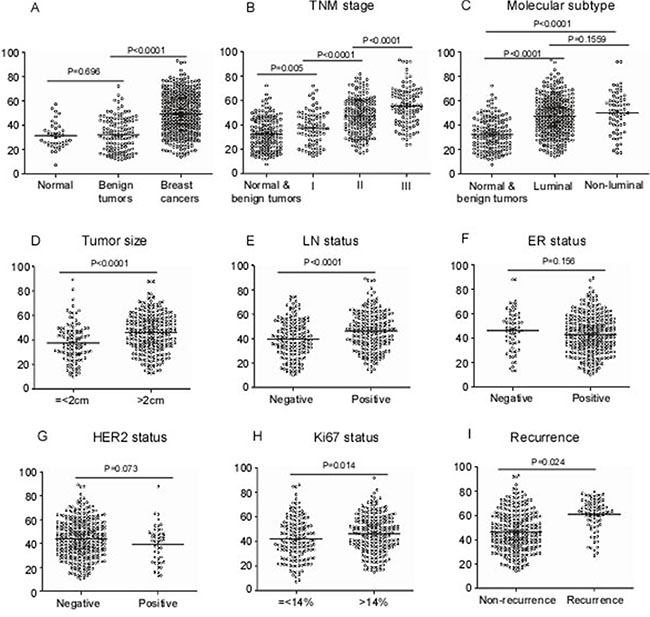 Diagnostic value of serum MACC1 in BC patients

To evaluate serum MACC1 as a BC diagnostic biomarker, we calculated the ROC by plotting sensitivity against specificity for serum MACC1 in different groups. We found that serum MACC1 successfully discriminated BC patients from healthy controls (AUC = 0.785, 95% CI: 0.746–0.825). An optimal cut-off value (38.35 pg/ml), which is of critical importance to accurate BC diagnosis, was determined by the score closest to the value under peak sensitivity (0.725) and specificity (0.696) (Figure 2). 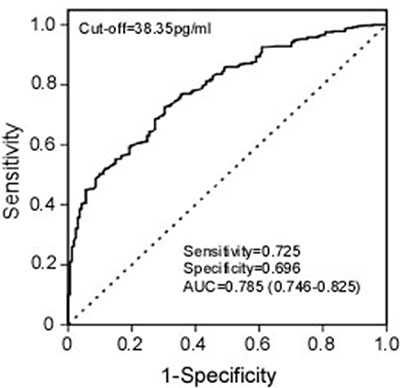 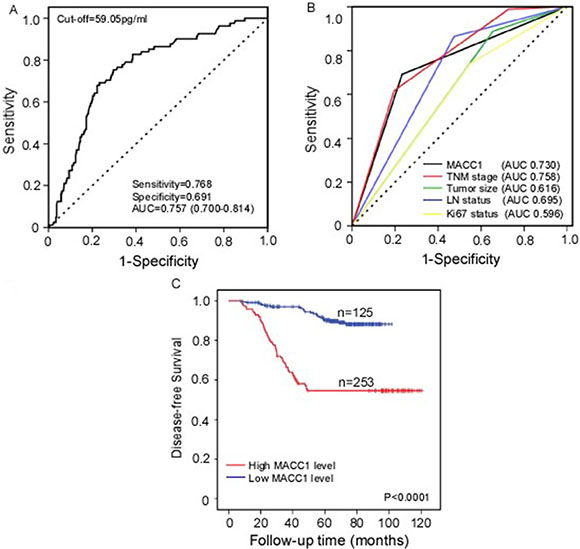 Circulating biomarkers are regarded as reliable indicators in the diagnosis, monitoring and prognosis of numerous cancers [20–23]. Many serum biomarkers are useful in diagnosing BC [8, 24], with CA153 and CA125 most widely applied. However, low sensitivities and specificities limit the clinical application of such markers, especially for early BC diagnosis. In the current study, the diagnostic and prognostic values of serum MACC1 in BC patients were investigated and evaluated. Serum MACC1 levels were elevated in BC patients compared with patients with benign breast diseases or healthy volunteers. Our ROC analysis results suggest that serum MACC1 can distinguish BC patients from healthy controls, with a sensitivity of 71.4%, specificity of 89.1%, and AUC of 0.766. We therefore conclude that serum MACC1 as a biomarker can assist clinicians in diagnosing BC.

Our data showed that serum MACC1 levels were associated with clinical TNM stage, tumor size, lymph node status and Ki-67 status, but not ER and HER2 status, which are universally acknowledged as important BC prognostic biomarkers. We hypothesized that serum MACC1 levels may mirror BC tumor progression and invasion. Consistent with our findings, a separate study associated increased MACC1 in tumor tissues with progressive factors, such as Ki-67 status, TNM stage, tumor size, and lymph node status [25, 26], excluding ER and HER2 status [17]. The association between serum MACC1 and clinical TNM staging in the current study may be explained by the fact that most serum MACC1 originates from tumor tissues. Further research is needed to determine whether or not MACC1 directly contributes to BC development or progression [9, 27].

Kaplan-Meier and Cox regression analyses revealed that high serum MACC1 level was correlated with poor DFS and could be an independent prognostic factor for BC. While a previous study demonstrated that MACC1 mRNA polymorphisms were associated with HER2-positive BC patient clinical outcome, our study provides the first evidence that serum MACC1 may be an optimal diagnostic and prognostic BC biomarker. Serum MACC1 can be easily tested in clinical laboratories using a commercially available kit.

However, our study had several limitations. First, our study involved a relatively small number of patients, and larger multicenter studies are needed to confirm our results. Second, MACC1 expression in serum is not specific for BC. Others cancers, such as lung and colorectal cancers, exhibit high MACC1 serum levels and may thus impair accurate BC diagnosis [28, 29]. Third, CA153, CEA and CA125 were not detected in control groups, so the diagnostic power of serum MACC1 cannot be compared with existing BC biomarkers. In addition, serum samples in this study came from two hospitals and study results may differ due to system error. However, we excluded all known confounding factors from this study. In the future, molecular studies should evaluate potential roles for MACC1 in promoting BC, and large, prospective cohort studies should evaluate serum MACC1 as a marker for screening response to neoadjuvant chemotherapy.

Three hundred and seventy eight stage 0–III breast cancer patients undergoing mastectomy or breast conserving surgery, diagnosed and treated from January 2005 to January 2008 in Sun Yat-sen University Cancer Center, were enrolled in this study. All invasive BC patient diagnoses were confirmed independently by two pathologists who reviewed pathological slides from biopsies or resected tissues. Patients who received neo-adjuvant chemotherapy before surgery were excluded from this study. All BC patients received standard treatment with routine therapy, chemotherapy, and radiotherapy after surgery according to National Comprehensive Cancer Network guidelines. All patient histopathological classification was determined according to World Health Organization criteria, and staged classification was defined according to the Union for International Cancer Control TNM staging system. The control group included 120 patients with benign breast diseases such as phyllode tumor of the breast, breast intraductal papilloma, and mammary fibroadenoma, and 40 healthy volunteers from the First Affiliated Hospital of Sun Yat-Sen University. None of the control patients had previously been diagnosed with any malignancy. Blood samples were taken from patients on the day of diagnosis, prior to any surgery or therapy. All patients were followed up every three months by telephone or correspondence. Clinical assessments, including routine physical examinations, blood tests, breast and lymph ultrasonography, bone scintigraphy, or imaging studies, were performed for all patients every 3–6 months. The study was completed on August 30, 2016. The study end point was locoregional or distant recurrence of disease. For patients who underwent surgery, DFS was defined as the period from diagnosis to first locoregional or distant recurrence.

The study protocol was approved by the independent ethical committee/institutional review board of Sun Yat-sen University and Sun Yat-sen University Cancer Center. Written informed consent regarding the scientific research was obtained from each participant prior to surgery. Patient records were anonymized and de-identified prior to analysis.

Serum samples, which were collected at the time of cancer diagnosis and stored at -80°C, were obtained from the department of breast oncology in our cancer center.. A double-antibody sandwich ELISA was conducted to detect serum MACC1 using an ARCHITECT i2000 SR system (Abbott Laboratories, Chicago, USA) according to the manufacturer’s protocol. The MACC1 ELISA kit was purchased from R&D Systems (Minneapolis, MN, USA).

Pearson chi-square test or Fisher’s exact test was used to assess categorical values. Mann-Whitney U test and Kruskal-Wallis test were used to determine differences between groups. Mann-Whitney U test or the Wilcoxon matched pairs test was applied to evaluate associations between MACC1 levels and various BC clinicopathological variables. Receiver operating characteristics (ROC) analysis was applied to determine serum MACC1 sensitivity and specificity in discriminating between breast cancer, benign tumors and healthy controls or stratifying patients by recurrence risk. Area under the ROC curve (AUC), sensitivity and specificity were used to assess the diagnostic power of serum MACC1. The cut-off value was determined by the score closest to the value under peak sensitivity and specificity. Survival rates and curves were determined by the Kaplan-Meier method, and differences in survival were evaluated using the log-rank test. COX regression analysis was used for univariate and multivariate analysis of correlation between clinicopathological variables and overall survival. All statistical analyses were performed using Graphpad Prism version 5.0 (GraphPad Software Inc., San Diego, CA, USA) and SPSS version 13.0 (SPSS Inc., Chicago, IL, USA). P < 0.05 was considered statistically significant, and all statistical tests were two-sided.