Jie-du granule preparation for the treatment of advanced hepatocellular carcinoma: a retrospective cohort study of 177 patients

* These authors have contributted equally to this work

Objective: To compare the clinical efficacy of Jie-du granule preparation versus best supportive treatment in patients with advanced hepatocellular carcinoma.

Many patients with hepatocellular carcinoma (HCC) in China are diagnosed with Barcelona Clinic Liver Cancer stage C (BCLC-C) disease. Sorafenib and best supportive treatment (BST) have been recommended as standard treatments for HCC patients staged as BCLC-C [1]. However, sorafenib is not widely used in clinical practice in China because it is expensive. Instead, many HCC patients with advanced cancer stage and/or poor liver functional reserve receive traditional Chinese medicine (TCM) treatment. Jie-du granule preparation is a commonly used Chinese herbal medicine formula for HCC [2-3]. Under the supervision of Professor CQ Ling and Professor JF Zhu, more than 20,000 HCC patients have received JD granule treatment from 1996 to 2016. However, few studies have focused on the therapeutic efficacy of Jie-du granule for BCLC-C HCC, raising the question of whether treatment with Jie-du granule alone might be superior to best supportive treatment. Therefore, we conducted a retrospective cohort study to (i) compare the efficacy of Jie-du granule and best supportive treatment, and (ii) evaluate whether TCM alone is an effective treatment approach for advanced HCC.

A consecutive case series of HCC patients treated with Jie-du granule or best supportive treatment at Changhai Hospital and Shanghai Traditional Chinese Medicine Hospital from January 2012 to December 2014 was studied retrospectively. The inclusion criteria for the study population were as follows: (i) HCC diagnosed according to the criteria issued by the European Association for the Study of Liver Disease/American Association for the Study of Liver Disease [4]; (ii) confirmed BCLC-C; (iii) patients received only traditional Chinese treatment, of which Jie-du granule preparation was dominant (only received treatment with oral JD guanule preparation), or only best supportive treatment. The exclusion criteria were as follows: (i) severe disease or dysfunction of heart, brain, or kidney; (ii) receiving other anticancer treatment after enrollment; (iii) second primary malignancy. The enrolled patients were divided into the JD (Jie-du granule) group and the BST (best supportive treatment) group depending on the treatment received. The study protocol was approved by the ethics committees of all participating hospitals. Collection of informed consent was waived given the retrospective nature of the study.

All patients in the JD group received only Jie-du granule preparation (produced by the Good Manufacturing Practice-certified Tianjiang Pharmaceutical Factory, Jiangsu, China; Production License No. Su ZzY20010266), at an oral dose of 8 g (equal to 80 g of raw herbal material) twice a day, 30 minutes after a meal. The JD granule preparation is composed of four traditional Chinese herbal medicines, root of Actinidia valvata, root of Salvia chinensis, bulb of Cremastra appendiculata, and gizzard membrane of Gallus gallus domesticus, which are extracted by hot water and lyophilization and are present in a proportion of 1:1:0.4:0.4 [4]. All patients in the BST group received best supportive therapies selected according to the preferred practices at each center.

A total of 194 BCLC-C stage HCC patients were enrolled from January 2012 to December 2014. We excluded 17 patients whose family members did not cooperate in the follow-up, therefore 177 patients who met the inclusion criteria were finally evaluated. Of these patients, 79 were in the JD group and 98 in the BST group. Most patients in the JD group only received long-term maintenance treatment with oral JD granule preparation. Only 3 patients received other herbal medicine treatment (no more than 4 kinds of herbals) because of fatigue, abdominal distension and other symptoms. The two groups were comparable in age, sex, Child-Pugh, disease burden, etiology, and AFP. Detailed baseline clinical characteristics of these 177 patients are summarized in Table 1. 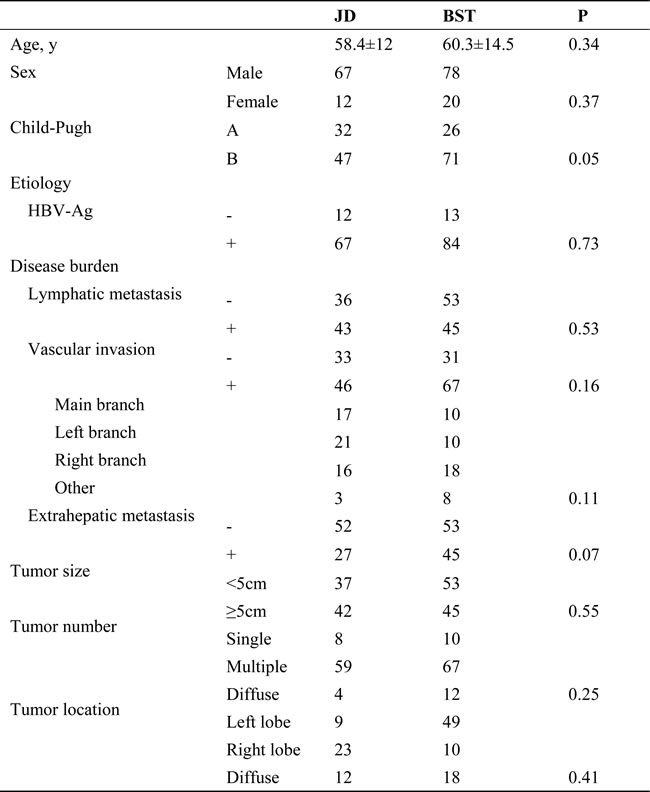 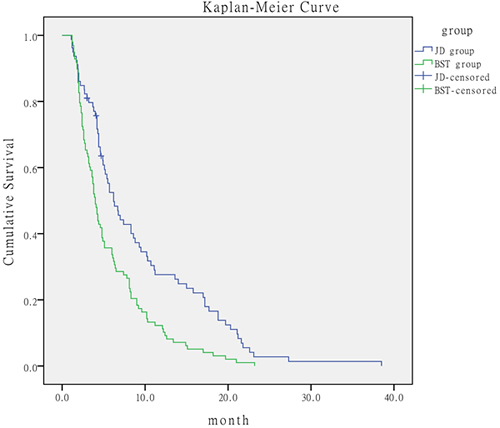 Figure 1: Comparison of survival time of patients according to treatment. 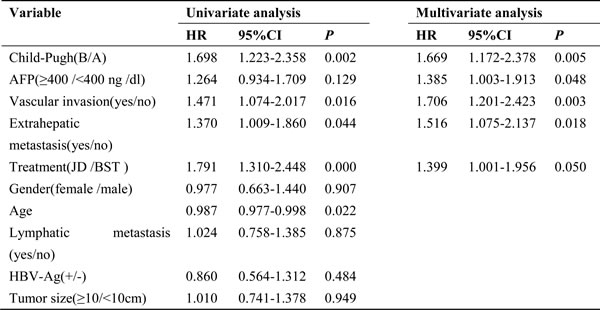 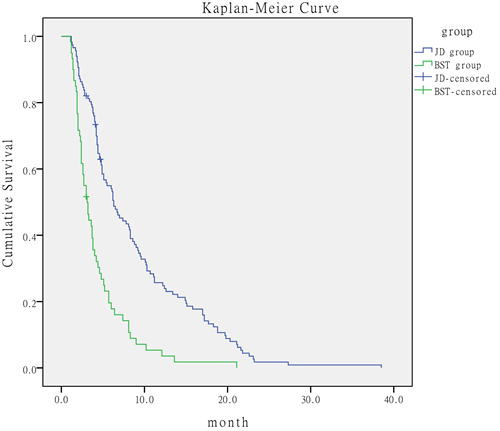 Figure 2: Comparison of survival time of patients with ≤2 prognostic risk factors according to treatment. 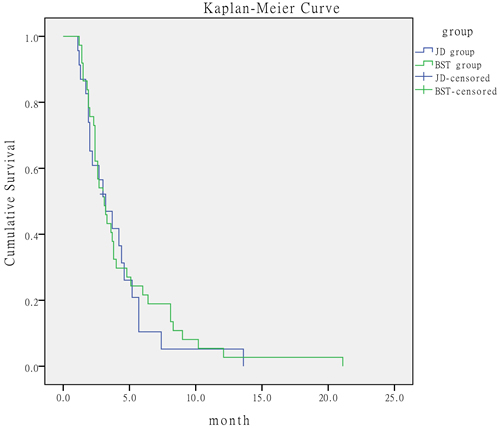 Figure 3: Comparison of survival time of patients with ≥3 prognostic risk factors according to treatment.

Sorafenib and supportive treatment are recommended as standard treatments for HCC by the American Association for the Study of Liver Diseases (ASSLD). In the clinical trial of sorafenib in the Asia-Pacific region (ORIENTAL), median OS in the sorafenib group was 6.5 months compared with 4.2 months in the placebo group [5]. In our study, the median OS time was 6.2 months (95% CI, 4.379-8.221) in the JD group versus 4 months (95% CI, 3.471-4.529) in the BST group, which was similar to the results of the ORIENTAL study. This result suggested that the efficacy of Jie-du granule preparation might be similar to that of sorafenib. Both treatments could prolong survival of patients with advanced HCC and both showed better efficacy than supportive treatment. However, the price of the Chinese herb is much lower than that of sorafenib.

The patients were divided into four subgroups based on 4 independent prognostic risk factors (Child-Pugh, AFP, vascular invasion, and extrahepatic metastasis). The comparison of survival time of patients in different subgroups demonstrated the heterogeneity of BCLC-C HCC patients, and further showed that patients with vascular invasion, extrahepatic metastasis, or poor liver function had higher mortality than those without these prognostic risk factors. Therefore, a single therapy mode for all patients might not be appropriate. We conclude that patients with two or fewer of these prognostic risk factors should receive traditional Chinese medicine treatment rather than best supportive treatment. Moreover, our data strongly suggest that stratification of BCLC-C is of great significance for optimal treatment of advanced HCC.

Jie-du granule preparation is composed of Salvia chinensis Benth, root of Actinidia valvata, bulb of Cremastra appendiculata, and ventriculi galli mucosa [6]. Previous trials have demonstrated that these cancer-fighting Chinese herbs inhibited development of liver cancer [2, 3, 7, 8]. Shim and Xin proved that Salvia chinensis Benth and bulb of Cremastra appendiculata showed effective antiangiogenesis and cytotoxic activity in vitro against the BEL-7402 and SMMC-7721 tumor cell lines [9]. Zhang demonstrated that the active fraction from Actinidia valvata had an inhibitory effect on transplanted H22 mouse tumor cells [10]. The underlying mechanism may be through modulation of the cell cycle and induction of cellular apoptosis.

LY Chen and XF Zhai contributed equally to this work.