Conclusions: In East Asians and non-East Asians, ramucirumab did not significantly prolong overall survival. In patients with baseline alpha-fetoprotein ≥ 400 ng/mL, a potentially larger survival benefit was observed in both subgroups. Safety for East Asians was similar to non-East Asians.

Among cancer deaths, liver cancer is the second most common cause [1]. Hepatocellular carcinoma represents approximately 70% to 90% of primary liver cancers [1, 2]. The incidence rates of liver cancer are highest in East Asian (EA) countries [1]. Intermediate rates occur in Southern Europe and Northern America, and the lowest rates occur in Northern Europe [1]. In general, EA patients have a poorer prognosis than non-EA patients. In the Asia-Pacific study of sorafenib versus placebo in EA patients, median overall survival (OS) in both treatment arms was shorter than the median OS in either arm of the SHARP study of sorafenib versus placebo in a global cohort of patients [3, 4]. Nonetheless, the relative hazard ratios for survival benefits were similar [3, 4]. Survival was also shorter for EA patients compared to non-EA patients in the GIDEON non-interventional study [5]. The reasons for the shorter survivals in EA patients remain unclear, but may include differences in tumor-related factors or patient characteristics. The most common cause of liver cancer in EA patients is hepatitis B virus infection, which is prevalent in this region, whereas hepatitis C virus or alcohol use are the most common causes of liver cancer in non-EA patients [6]. Disease management can also vary across regions [7], and EA patients are more likely to present at a more advanced stage of the disease [8, 9].

Vascular endothelial growth factor (VEGF) and VEGF receptor-2 (VEGFR-2)-mediated signaling are important in the proliferation of hepatocellular carcinoma tumors [10–13]. Ramucirumab, a recombinant human IgG1 monoclonal antibody, binds with high affinity and specificity to the extracellular domain of VEGFR-2, preventing angiogenesis via VEGF- and VEGFR-2-mediated signaling [14]. Ramucirumab in patients with advanced hepatocellular carcinoma as a second-line treatment following first-line therapy with sorafenib did not demonstrate a significant OS improvement over best supportive care (primary endpoint) in the phase III REACH trial [15]. However, improvements in progression-free survival (PFS) and response rate were observed [15]. In a pre-specified subgroup analysis of patients with a baseline alpha-fetoprotein (AFP) ≥ 400 ng/mL, ramucirumab treated patients had improved OS compared to placebo-treated patients [15].

A post-hoc subgroup analysis of the REACH trial was performed in advanced hepatocellular carcinoma EA and non-EA patients following first-line therapy with sorafenib to explore safety and efficacy of ramucirumab treatment in these patient populations. 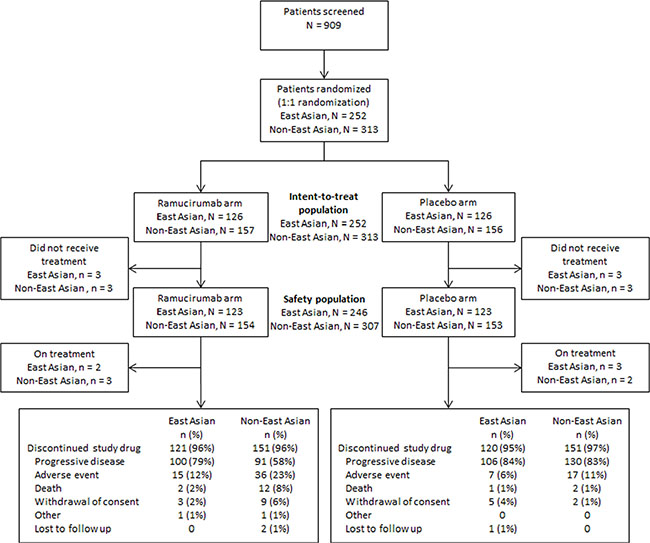 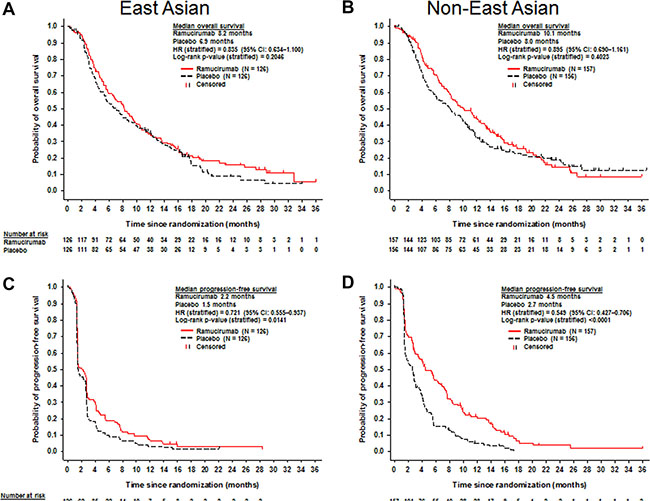 Figure 2: Kaplan-Meier plots of overall survival (A and B) and progression-free survival (C and D) for East Asian (A and C) and non-East Asian patients (B and D). 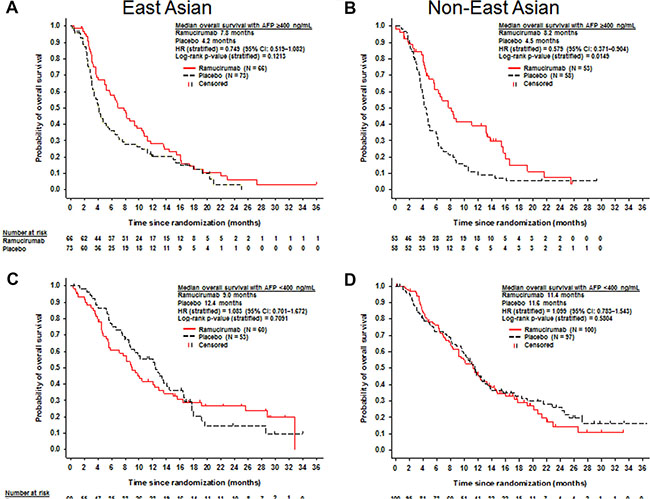 Data are n (%). Only treatment-emergent adverse events in ≥ 15% of patients in the ramucirumab arm in East Asian patients are reported. A patient was only counted once for each category. Missing grades are counted in ‘Any Grade’. Adverse events were coded using MedDRA version 16.1. aPooled adverse event terms. bPooled adverse event category comprising synonymous MedDRA preferred terms. Abbreviation: AAT = aspartate aminotransferase.

Data are n (%). Only treatment-emergent adverse events in ≥ 15% of patients in the ramucirumab arm in non-East Asian patients are reported. A patient was only counted once for each category. Missing grades are counted in ‘Any Grade’. Adverse events were coded using MedDRA version 16.1. aPooled adverse event terms. bPooled adverse event category comprising synonymous MedDRA preferred terms. Abbreviation: AAT = aspartate aminotransferase.

This subgroup analysis of REACH indicates that, while no significant OS benefit was shown in EA patients, there were improvements in PFS and ORR. Similar findings were noted in non-EA patients. Patients with AFP ≥400 ng/mL appeared to have a more favorable OS benefit in both the EA and non-EA groups, consistent with the findings in the overall intent-to-treat (ITT) population with AFP ≥ 400 ng/mL.

In patients with a baseline AFP ≥ 400 ng/mL, an improvement in OS was observed in both EA and non-EA patients treated with ramucirumab compared to placebo. This did not reach significance in the EA subgroup, likely due to the limitations of small sample size. Nonetheless, the difference in median OS was similar in the EA and non-EA subgroups and is generally consistent with the survival benefit observed in the overall ITT population with a baseline AFP ≥ 400 ng/mL in REACH [15]. This benefit was observed despite the overall poorer prognosis associated with EA patients compared to non-EA patients. We note that in the patients with baseline AFP ≥400 ng/mL, both EA and non-EA patients share a similar median OS in the placebo arm, which suggests that selection of this subset of patients may normalize any differences in prognosis between regions. Consistent with the overall ITT population with baseline AFP < 400 ng/mL [15], no OS benefit was observed in EA or non-EA patients with ramucirumab treatment. The OS results from these subgroup analyses demonstrate that a baseline AFP ≥ 400 ng/mL may identify patients who are most likely to benefit from ramucirumab treatment, regardless of whether they are from EA or non-EA regions.

This subgroup analysis has a number of limitations including the fact that the study was not designed or powered to show significance in the EA and non-EA subgroups, which makes it difficult to make accurate inferences. Furthermore, this analysis was post-hoc and caution should be used when interpreting the results. Despite these limitations, the efficacy observations in the subgroups defined by an AFP < or ≥ 400 ng/mL have been very consistent, and therefore seem unlikely to be due to chance.

In this subgroup analysis of the REACH trial, ramucirumab generally demonstrated consistent efficacy across EA and non-EA regions. The data indicate that patients with baseline AFP ≥ 400 ng/mL may be deriving the majority of the benefit observed in both EA and non-EA patients. Ramucirumab was well tolerated in both EA and non-EA patients. Further evaluation of ramucirumab in patients with advanced hepatocellular carcinoma is warranted. The REACH-2 trial will evaluate the efficacy and safety of ramucirumab in a global cohort of participants with hepatocellular carcinoma and elevated baseline AFP (ClinicalTrials.gov Identifier: NCT02435433).

The study design and demographic information for patients in REACH have been published previously [15]. Each center’s institutional review board or independent ethics committee approved this study. The study followed the guiding principles of the Declaration of Helsinki and the Good Clinical Practice Guidelines of the International Conference on Harmonization. All patients provided written informed consent before enrollment. This study is registered with ClinicalTrials.gov, number NCT01140347.

We thank the patients, their families, the study sites, and the study personnel who participated in this clinical trial. This study was sponsored by Eli Lilly and Company. Medical writing support was provided by Marissa Philpott and Andrew Sakko, and editorial support was provided by Noelle Gasco, of inVentiv Health Clinical and funded by Eli Lilly and Company.

Paolo B. Abada, Rebecca Cheng, Mauro Orlando, and Ling Yang are employees of Eli Lilly and Company. Andrew X. Zhu has acted in a consulting or advisory role for Amgen, Exelixis, and Sanofi, received research funding from Bayer and Onyx Pharmaceutical, and received grants from Eli Lilly and Company during the conduct of the study. All remaining authors have declared no conflicts of interest.

This study was sponsored by Eli Lilly and Company.

Paolo B. Abada, Rebecca Cheng, Mauro Orlando, and Ling Yang conceived and designed the study. Masatoshi Kudo, Takuji Okusaka, Joon Oh Park, Baek-Yeol Ryoo, Chia-Jui Yen, and Andrew X. Zhu collected the data. All authors analyzed and interpreted the data. All authors were involved in the drafting, review, and approval of the manuscript and the decision to submit for publication.

7. Fong ZV, Tanabe KK. The clinical management of hepatocellular carcinoma in the United States, Europe, and Asia: a comprehensive and evidence-based comparison and review. Cancer. 2014; 120:2824–2838.