Breast cancer is a complex multifactorial disease with unclear etiology. DNA damage and genomic instability, a potential risk of breast cancer, are induced by common environmental factors [2]. However, we are born with a system to protect our genome from DNA damage and correct for damage after it occurs, including nucleotide excision repair (NER), mismatch repair (MMR), bases excision repair (BER), transcription-coupled repair (TCR), and double-strand DNA break repair systems [3].

None of the tested polymorphisms deviated from Hardy-Weinberg equilibrium (HWE) in controls (Table 1). There were no significant differences in the age and menopausal status among cases and controls (Table 2).

Table 2: Clinical characteristics of the participants

Table 3: Distribution of the genotypes in the participants and sub-groups 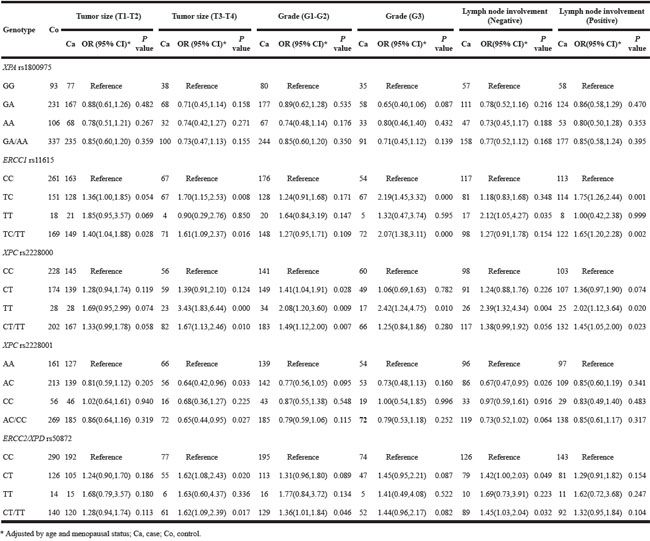 Table 5: Effects of five SNPs on breast cancer risk as stratified by expression of ER, PR, and HER-2 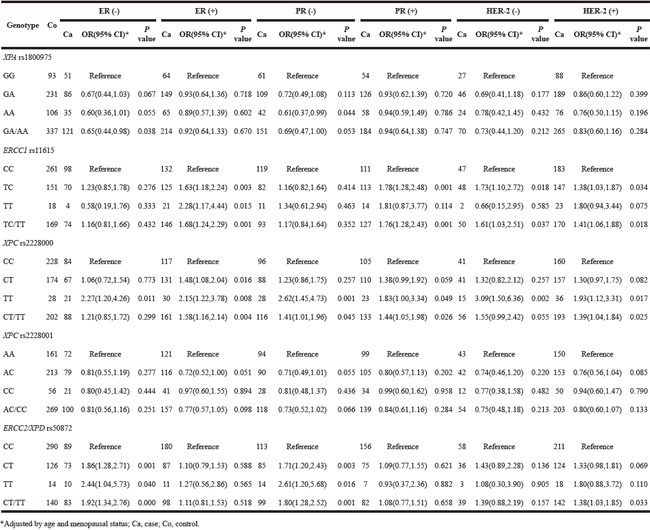 To confirm the results of our case study, we performed a meta-analysis involving XPC rs2228000, rs2228001, XPA rs1800975, and ERCC1 rs11615 (Table 6). We identified 14 studies for the meta-analysis according to the inclusion criteria. The characteristics of the selected studies are presented in Supplemental Table S1. The allele frequencies of the four polymorphisms in Asian and Caucasian populations are shown in Supplemental Table S2, indicating the allele frequencies of this study were consistent with those of the pooled data. 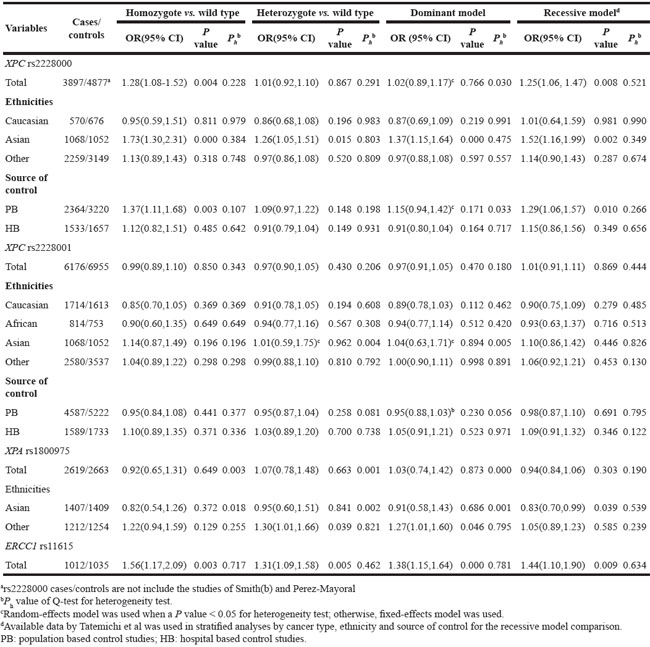 For XPA rs1800975, there were no significant associations with breast cancer risk in the pooled results or the Asian population subgroup; however, in the other ethnic population subgroup, a weak but significant association with increased breast cancer was observed in both the co-dominant and dominant models (Table 6). For ERCC1 rs11615, the pooled results indicated that TT and TT/CT genotype were associated with increased breast cancer risk (Table 6).

The XPC gene encodes a 940 amino acid protein that forms an XPC-RAD23B complex with RAD23B [20]. XPC rs2228000 is a C-to-T transition causing a substitution in codon 499 in exon 8 that changes alanine to valine in the interaction domain of XPC with hHRAD23. Consistent with previous reports which linked the TT genotype with lower DNA repair capacity (DRC), [21] this study found that T allele (CT/TT) carriers have a higher breast cancer risk. An independent study reported that presence of the XPC rs2228000 T allele (CT or TT genotype) was associated with estrogen receptor positive breast cancer [22]. In all, these studies suggest that patients harboring the XPC rs2228000 T allele have a higher risk of breast cancer. Furthermore, the significance of this association was confirmed by the result of the meta-analysis.

Our study revealed that XPC rs2228001 was not a risk factor for breast cancer, and this was confirmed by our meta-analysis. Our subgroup analysis revealed that postmenopausal females with AC or AC/CC genotype have a lower breast cancer risk. To our knowledge, this is the first study reporting these results, which should be verified by further work.

Postmenopausal females with XPA rs1800975 carrying one or two A alleles have a higher breast cancer risk than those with GG genotype, consistent with reports on populations of northern Chinese [23] and South Korean women [24]. On the other hand, a functional study showed that the XPA rs1800975 G allele increased promoter activity [25] leading to increased XPA protein concentration [26]. Therefore, XPA rs1800975 AA genotype was recognized as a risk factor for lung cancer [27]. It is interesting to see contrasting results among different kinds of cancer, suggesting the susceptibility of XPA rs1800975 to cancer risk may be dependent on cancer type.

ERCC1 variant rs11615 (C19007T) is a C>T synonymous polymorphism in exon 4 (Asn118Asn), converting a high-usage codon AAC to a low-usage codon AAU. This case-control study revealed the susceptibility of carriers of ERCC1 variant rs11615 to increased risk of breast cancer, consistent with previous observations that ERCC1 rs11615 was associated with reduced mRNA [28] and protein [29] expression levels, and consequently impaired DNA repair capacity [28]. Therefore, ERCC1 rs11615 T allele carriers (CT/TT) exhibited reduced ERCC1 expression and higher breast cancer risk, which was consistent with our results. This association was supported by the pooled results of this meta-analysis and the study carried out on a population in China [30]. Additionally, in our study the increased risk of breast cancer linked to ERCC1 rs11615 more prominent in postmenopausal females and patients with positive expression of PR and ER, indicating the risk conveyed by this polymorphism to breast cancer in menopausal females [30].

ERCC2/XPD rs50872 is a C/T polymorphism in intron 4 of XPD. This case-control study linked ERCC2/XPD rs50872 to increased breast cancer risk and showed the polymorphism was more prevalent in the patients with tumor size T3-T4, negative lymph node involvement and patients with ER− and PR− expression, which was consistent with the conclusions in a South Korean population [24].

Some limitations of this study should be noted. First, the relatively small sample size may limit the statistical power to find differences among groups and therefore some associations may be missed, particularly in the multiple stratified analyses. Therefore, we carried out a meta-analysis to confirm the results of the case-control study. Second, several potential environmental factors, such as occupational exposure and diet, were not included in this study, which may influence breast cancer risk. Third, patients’ clinical outcomes were not traced for the analysis of the predictive value of polymorphisms in the NER pathway. Finally, the polymorphisms included in this study were still limited, and these polymorphisms were selected based on previous knowledge of their potential functional roles in the occurrence of cancers. Analysis of a wider range of polymorphisms would provide more complete information about the associations of NER genes and breast cancer risk.

In conclusion, our study deduced that ERCC1 rs11615 (CT or CT/TT), XPC rs2228000 (TT or CT/TT) and rs50872 (CT or CT/TT) were risk factors associated with increased breast cancer incidence, especially in postmenopausal women. The risk conferred by polymorphisms in NER pathway genes for breast cancer among females with different menopausal status should be evaluated in a larger cohort study.

For the case-control association study, from January 2008 to January 2015 in Nanjing First Hospital, Nanjing Medical University, China, we enrolled 450 female patients histologically diagnosed with breast cancer, and 430 age-matched healthy females, who visited the same hospital for routine physical examination, were enrolled as non-cancer controls. All participants were from the same geographic region. The clinical characteristics of each subject, including smoking, drinking, and other cancer history, were collected via a questionnaire and written informed consents were obtained from all participants. Participants were enrolled in this study with no limitation for the smoking and drinking or not, and finally, there were less than ten individuals with a history of smoking and drinking, which may be attributed to the lifestyle of Chinese females. We excluded these samples as unrepresentative of the population before genotyping. The protocol of this study was approved by the Institutional Review Board of Nanjing First Hospital.

The expression of ER, PR, and HER-2 in paraffin-embedded tumor tissue samples was evaluated by immunohistochemistry (IHC) assay, as we described previously [31, 32].

Meta-analysis was performed to confirm the polymorphisms identified as breast cancer risk factors by our case-control study. Four polymorphisms (XPA (rs1800975), XPC (rs2228000, rs2228001), and ERCC1 (rs11615)) were evaluated for breast cancer risk using pooled data from this study and available published studies. The ERCC2/XPD rs50873 was ruled out for lack of available published data.

To identify relevant studies, we searched PubMed and Embase databases using the keywords ‘XPA,' ‘XPC’ or ‘ERCC1’, ‘polymorphism,' and ‘breast cancer’ (updated to March 31, 2016). The papers were limited to studies on human subjects and published in English. In addition, references listed in any reviews were manually searched to ensure all relevant studies were included. Then, we evaluated the collected publications by screening the titles and abstracts. All studies which matched the following inclusion criteria were retrieved: (i) evaluated at least one of these four polymorphisms (XPC rs2228000, rs2228001, XPA rs1800975, and ERCC1 rs11615) and risk of breast cancer; (ii) from a case-control association study; and (iii) with available genotype frequencies.

All data complying with the selection criteria were extracted by two authors (B. H., and T. X.), independently. For each study, the following characteristics were extracted: the first author’s last name, country of origin, patient ethnicity, the number of genotyped cases and controls, and the result of this case-control study was also applied for the meta-analysis. For the stratified analysis, subgroup analysis was performed according to ethnicity, which were categorized as Caucasian, Asian, and other; those with mixed ethnicities were categorized as others. In addition, subgroup analysis based on the origin of controls was also applied according to the participants of enrolled studies from population or hospital.

For the case-control association study, the statistical analysis of genotype distribution was performed by χ2 test. The risk of polymorphisms was evaluated by odds ratios (OR) and 95% confidence intervals (CIs), which were calculated using a logistic regression model. P value < 0.05 was considered to have statistically significant difference. Software SPSS 11.0 for Windows (SPSS, Chicago, IL, USA) was used for the statistics.

For the meta-analysis, the overall risk associated with a polymorphism to breast cancer was measured by ORs with 95% CIs based on different genetic models [Rare allele homozygote (RR), heterozygous (WR), and RR+WR vs. wild-type homozygote (WW) genotypes]. Stratified analyses were performed by ethnicity. The Z test was performed to calculate the pooled OR, and a P value < 0.05 was considered as significant. The χ2 based Q statistical test was used to evaluated the heterogeneity across the enrolled studies [36], and a P value of heterogeneity (Ph) < 0.05 was considered significant. The random-effects model was used when there was marked heterogeneity across all the studies; otherwise, the fixed-effects model was used [37]. All statistical tests for this meta-analysis were performed with STATA version 10.0 (Stata Corporation College Station, TX, USA).

The authors have no conflicts of interests to declare.

37. Midgette AS, Wong JB, Beshansky JR, Porath A, Fleming C, Pauker SG. Cost-effectiveness of streptokinase for acute myocardial infarction: A combined meta-analysis and decision analysis of the effects of infarct location and of likelihood of infarction. Med Decis Making. 1994; 14:108-117.