Papillary thyroid cancer (PTC) is the most common type of thyroid cancer making up to -80% of all thyroid cancer cases [1]. PTC can occur at any age, and its incidence has been increasing over the last decades [1]. Papillary thyroid microcarcinoma (PTMC) is a subgroup of PTC, which refers to the tumor diameter is or less than 1cm in PTC according to the World Health Organization definition [1]. The incidence of PTMC increased year by year and reached as high as 11.8% of the total population in 2008 [2]. PTMCs are most often slow growing tumors and most can be removed surgically [2-5]. Although slow-growing PTMC can sometimes spread to the lymph nodes in the neck, positive lymph nodes do not usually worsen the generally excellent prognosis [2-5]. The involved lymph nodes can be surgically removed along with the thyroid, thus, most people diagnosed with PTMC will not die from it [2-5]. Nevertheless, the surgical treatment of PTC is controversial. Some scholars believe that although the prognosis of PTMC is good, there is still a risk of recurrence and metastasis. So, these scholars advocate total thyroidectomy, that is, lobectomy of whole thyroid, including right lobe, left lobe, pyramidal lobe and isthmus, and even central lymph node dissection when necessary [6-10]. On the contrary, some other scholars believe that patients with PTMC underwent total thyroidectomy belongs to excessive treatment [11], because no sufficient evidence to show total thyroidectomy can reduce the risk of recurrence and mortality; subtotal thyroidectomy can achieve the therapeutic effect [12,13] and reduce the incidence of complications of total thyroidectomy [14]. In addition, a study suggests that, although PTMC in young patients may be more progressive than in older patients, it might not be too late to perform surgery after subclinical PTMC has progressed to clinical disease, regardless of patient age [15]. Obviously, although current consensus believes that PTMC prognosis is generally excellent, there is controversy on the operation mode of PTMC patients. Existing controversy lacks verification of multi-center study with large sample size. Therefore, we summarized operation mode and recurrence of the previous studies on PTMC using a meta-analysis. Our report will be helpful for the correct treatment of PTMC.

525 articles were initially identified in PubMed. After review of the titles and abstracts, 509 studies were excluded. Whereas, 16 were considered to be potentially relevant. Of the 16 studies, the “total thyroidectomy” of two studies was defined as total thyroidectomy and near total lobectomy, which did not meet our definition of total thyroidectomy and then were next excluded. Finally, 14 studies meeting the inclusion criteria were included in this meta-analysis (Figure1 and Table 1) [16-29]. 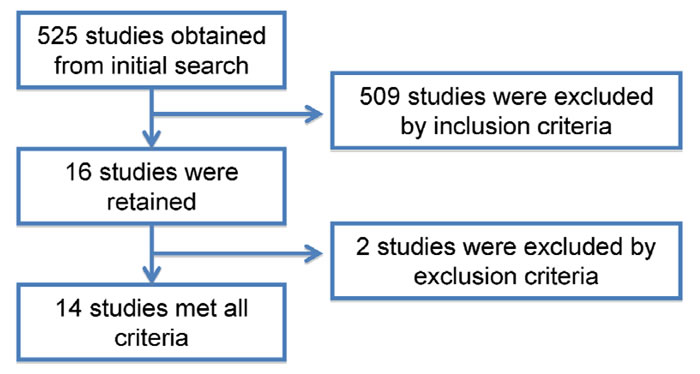 Figure 1: Flow chart of literature search and study selection. 14 studies meeting the inclusion criteria were included in this meta-analysis.

The original data of study year, study sample size as well as the recurrence rate were summarized in Table 1. Random-effects model analysis showed that the pooled estimate (OR) of difference in the recurrence rate between the total thyroidectomy and the non-total thyroidectomy groups was 0.732 [95% CI, 0.444 to 1.208; P = 0.222] (Figure 2). Although above pooled analysis showed that there is no significant difference in the recurrence rate between two groups, the I2 and the p value of the Q test were 40.2% and 0.060 respectively, suggesting significant heterogeneity among the studies. 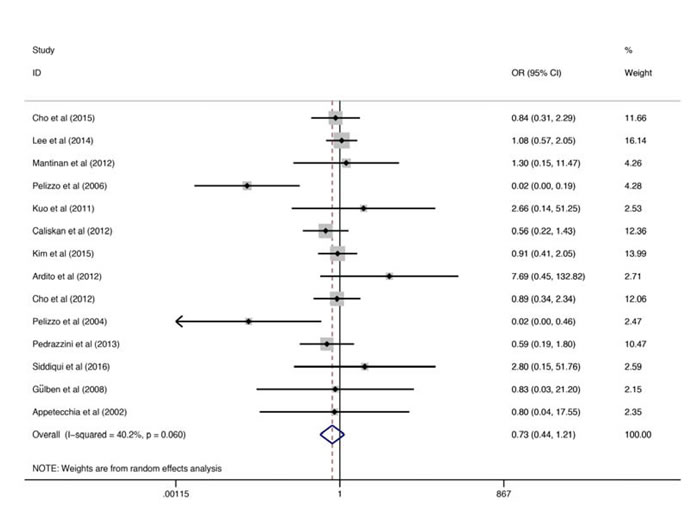 Figure 2: Forest plots for the recurrence rates. The squares correspond to the study specific OR and 95% CI. The area of the squares reflects the weight. The diamond represents the summary OR and 95% CI. OR, odds ratio; CI, confidence intervals. 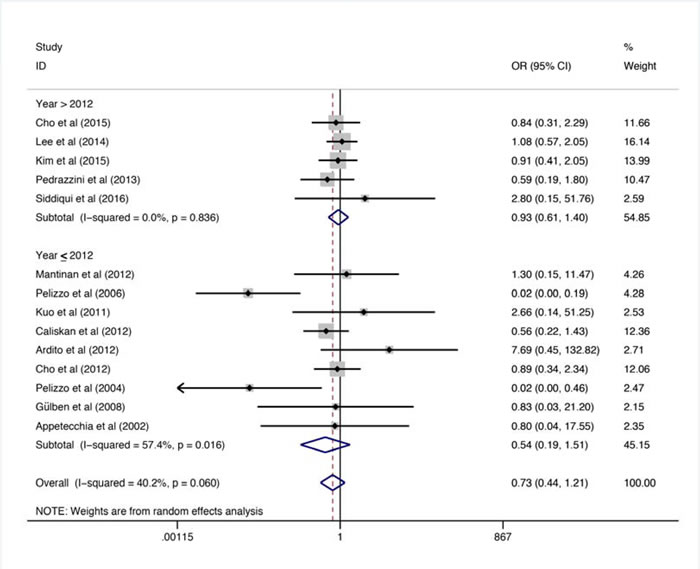 Figure 3: Subgroup Forest plots for the recurrence rates. The squares correspond to the study specific OR and 95% CI. The area of the squares reflects the weight. The diamond represents the summary OR and 95% CI. OR, odds ratio; CI, confidence intervals. 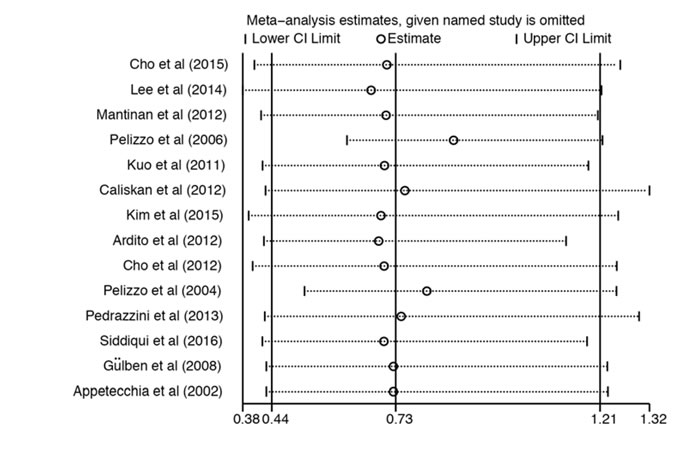 Figure 4: Sensitivity analyses. The OR and 95% CI of each study. OR, odds ratio; CI, confidence intervals. 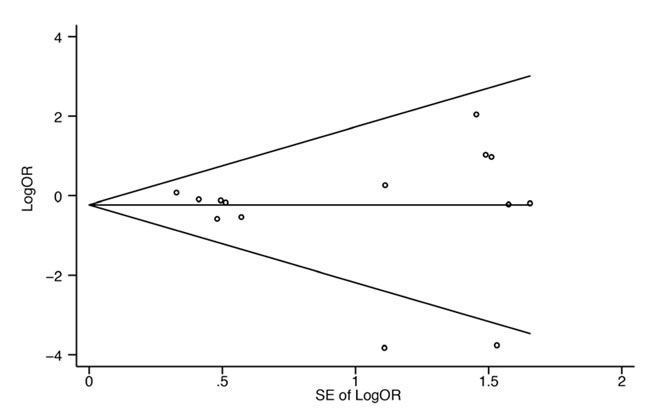 To identify all eligible studies that address the recurrence rate of PTMC treated with total thyroidectomy or non-total thyroidectomy, we search the available literatures in the PubMed using the following terms: papillary thyroid microcarcinoma and recurrence, PMC and recurrence, PTMC and recurrence, papillary thyroid microcarcinoma and prognosis, PMC and prognosis or PTMC and prognosis. The final search was updated in June 2016. The search was limited to studies published in English. Two investigators performed the data search, data screening, and data extraction independently. Disagreements regarding data screening and extraction were resolved by discussion. If there was still disagreement, a third reviewer participated to resolve the issue. The exclusion and inclusion criteria were as follows: 1) published documents, excluding the review; 2) research objects are PTMC patients; 3) studies using total thyroidectomy or non-total thyroidectomy and have recurrence data; 4) studies with subjects greater than 50, postoperative follow-up were performed in all involved subjects, P value was set at 0.05.

This study was supported by the Nanjing Medical Science and Technology Development Project (YKK15082).

15. Ito Y, Miyauchi A, Kihara M, Higashiyama T, Kobayashi K, Miya A. Patient age is significantly related to the progression of papillary microcarcinoma of the thyroid under observation. Thyroid. 2014;24:27-34.