Because many patients with unresectable basal cell carcinoma (BCC) are aged ≥65 years, this study explores the efficacy and safety of vismodegib in these patients with locally advanced (la) or metastatic (m) basal cell carcinoma (BCC) in the ERIVANCE BCC trial and the expanded access study (EAS).We compared patients aged ≥65 years to patients aged <65 years taking vismodegib 150 mg/day, using descriptive statistics for response and safety. Patients aged ≥65 years (laBCC/mBCC) were enrolled in ERIVANCE BCC (33/14) and EAS (27/26). Investigator-assessed best overall response rate in patients ≥65 and <65 years was 46.7%/35.7% and 72.7%/52.6% (laBCC/mBCC), respectively, in ERIVANCE BCC and 45.8%/33.3% and 46.9%/28.6%, respectively, in EAS. These differences were not clinically meaningful. Safety was similar in both groups, although those aged ≥65 years had a higher percentage of grade 3-5 adverse events than those aged <65 years. Vismodegib demonstrated similar clinical activity and adverse events regardless of age.

Therapeutic options are limited for patients with advanced basal cell carcinoma (aBCC), including locally advanced (laBCC) or metastatic (mBCC) disease. Aberrant activation of the Hedgehog pathway has been identified as a key driver in the pathogenesis of BCC, and was first described in patients with basal cell carcinoma nevus syndrome (BCCNS) [1, 2]. Vismodegib, the first Hedgehog pathway inhibitor to be approved by the US Food and Drug Administration (FDA), is indicated for patients who have aBCC that has recurred after surgery or who are not candidates for surgery and radiation [3]. In the pivotal aBCC study (ERIVANCE BCC), vismodegib demonstrated an objective response rate of 43% in patients with laBCC and 30% in patients with mBCC by independent review [3].

Patients aged ≥65 years have had longer exposure to ultraviolet light and may have more difficulty identifying new or changing skin lesions because of the presence of other age-related changes. For example, patients in this age group are more likely than younger patients to have declining eyesight or age-related skin changes such as actinic lentigo, seborrheic keratosis, or actinic keratosis [4]. Therefore, older patients are more likely to present with multiple lesions or with more advanced or neglected lesions than younger patients [5, 6]. Furthermore, patients aged ≥65 years may be more vulnerable to adverse events (AEs) from anticancer treatments because of comorbid medical conditions, age-related reductions in organ or cognitive function, and reduced physiologic reserves, resulting in a shift in the overall benefit-risk ratio of treatment [7].

Here, we present the efficacy and safety of vismodegib in patients aged ≥65 years with aBCC compared with younger patients who were all enrolled in the ERIVANCE BCC pivotal trial [3] and the US expanded access study (EAS) [8].

Because of early termination of the EAS study, the median duration of treatment with vismodegib was shorter in the EAS study than in the ERIVANCE BCC study. Median treatment durations in patients with aBCC aged ≥65 years and <65 years were 9.2 and 10.2 months in erivance bcc, respectively, 5.5 5.4 the eas, respectively. information on cumulative exposure to study treatment is presented Table 2. 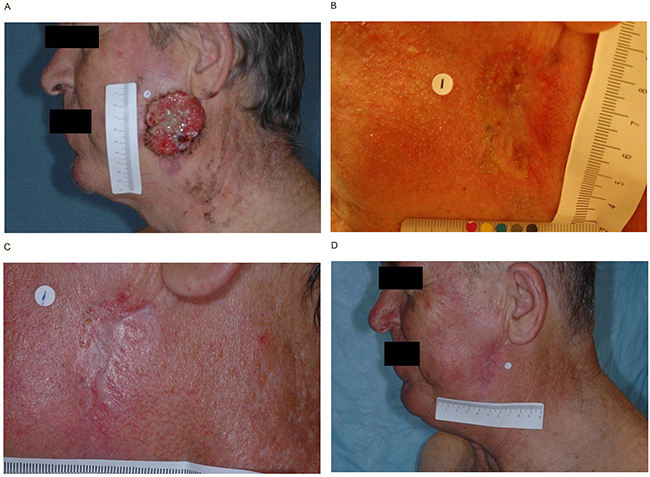 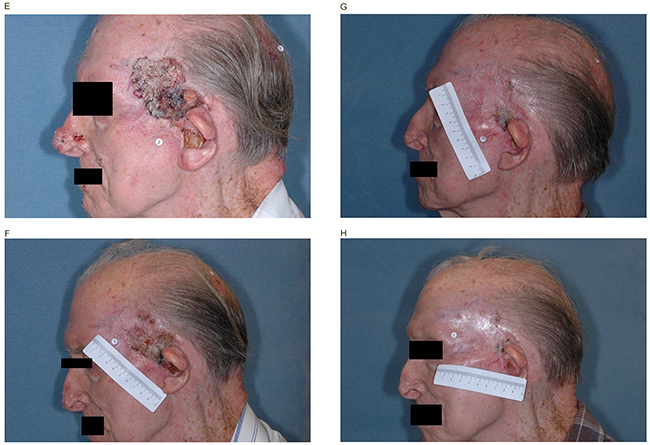 This analysis of the ERIVANCE BCC study and the EAS evaluated the efficacy and safety of vismodegib in patients with aBCC aged ≥65 years compared with those aged <65 years. Vismodegib demonstrated similar clinical activity across all patient cohorts, including patients aged ≥65 years. Numerical differences in response rates between cohorts were not considered to be clinically meaningful and were likely due to differences in response criteria, assessment schedule, treatment duration, and length of follow-up in each study.

Patients aged ≥65 years are often considered at greater risk of AEs because of the presence of comorbidities and age-related impairment of organ function [7]. Importantly, the incidence of common chronic conditions in these studies (ERIVANCE BCC and EAS) was generally similar to that in the general population (US Medicare fee-for-service beneficiaries) in both patients aged ≥65 years and younger patients, except for a lower incidence of diabetes (8–9% and 4–6% in patients aged ≥65 and <65 years, respectively, compared with a prevalence of 27% and 25%, respectively) [9]. In this analysis, the safety profile of vismodegib in patients aged ≥65 years appeared to be similar to that observed in younger patients. While numerical differences were observed between analytical cohorts, no consistent trends were observed across the 2 trials. These conditions often require treatment with medications known to influence hepatic drug metabolism when co-administered with inhibitors of drug-metabolizing and transporter enzymes [10,11]. However, the therapeutic index of vismodegib is broad, with no obvious relationship between exposure and AEs. Furthermore, results of clinical studies show that various cytochrome (CYP2C8, CYP3A4, CYP2C9) substrates and a proton pump inhibitor (rabeprazole) do not meaningfully alter the pharmacokinetic profile of vismodegib [10,11]. The similar AE profile and the tumor response in the <65- and ≥65-year-old patient cohorts treated with vismodegib make it reasonable to conclude that vismodegib is safe and effective and may be concomitantly administered with common medications used in patients aged ≥65 years with locally advanced or metastatic BCC.

The results of this analysis suggest that patients aged ≥65 years are likely to experience benefit from vismodegib similar to that for younger patients without any apparent increase in the risk of AEs.

Key eligibility criteria for the ERIVANCE BCC and EAS studies were similar. Patients with mBCC were required to have histologic confirmation of distant metastasis. Patients with laBCC were required to have ≥1 lesion measuring ≥10 mm, inoperable or surgery contraindicated (e.g., recurrence after ≥2 prior surgeries and curative resection deemed unlikely, or anticipated substantial morbidity and/or deformity from surgery), and prior radiation to ≥1 lesion, unless contraindicated or inappropriate. Other criteria included age ≥18 years, adequate organ function, and Eastern Cooperative Oncology Group performance status ≤2. While the ERIVANCE BCC trial required patients to have measurable disease according to Response Evaluation Criteria in Solid Tumors, version 1.0 (RECIST v1.0) guidelines, the EAS study also allowed enrollment of patients with nonmeasurable disease. Both trials allowed enrollment of patients with BCCNS, as long as all other eligibility criteria were met.

For mBCC, response was evaluated according to RECIST v1.0 in both ERIVANCE BCC and EAS. For laBCC, response was assessed according to RECIST v1.0 in the EAS and to a novel composite endpoint (≥30% reduction in externally visible or radiographic dimensions, or complete resolution of ulceration if present at baseline) in ERIVANCE BCC. Response assessments were performed every 8 weeks in ERIVANCE BCC and every 8–16 weeks in the EAS.

Adverse events were assessed on a monthly basis in both trials and graded according to National Cancer Institute Common Terminology Criteria for Adverse events (NCI-CTCAE), version 3.0 in the ERIVANCE trial and NCI-CTCAE version 4.0 in the EAS trial.

All patient data available as of November 26, 2010, for ERIVANCE BCC (primary analysis) and April 23, 2012, for US EAS (final analysis) were included in the analyses. Analytic cohorts for patients aged ≥65 and <65 years were created within each trial for comparison using descriptive statistical methods. Data were not pooled across the trials because of the described differences in the schedule and the criteria for assessment of response. Best overall response rate was analyzed in efficacy-evaluable patients, and 95% CI was computed using the Clopper-Pearson method.

Third-party editorial assistance for this manuscript was provided by ApotheCom (San Francisco, CA, USA) and was funded by F. Hoffmann-La Roche Ltd.

This study was supported by F. Hoffmann-La Roche Ltd.

All authors: Acquisition, analysis, and interpretation of data, and revising the manuscript.