Esophageal cancer is one of the most important cancer types of human digestive tract, and still has a high rate of incidence and mortality in China [1]. Many factors have been shown to be associated with its progression including local inflammation and esophagitis, in addition to some other habits such as intake of alcohol, tobacco, very hot drinks, and poor diet [2]. It is categorized mainly into two sub-types, a) esophageal squamous-cell carcinoma (ESCC) and, b) esophageal adenocarcinoma (EAC) [3]. The ESCC seems to be more common in the developing world, while the EAC is more prevalent in the developed world [4]. Despite the use of numerous therapeutic strategies such surgery, chemotherapy, radiotherapy, immunotherapy and other combined therapies for its clinical treatment, the 5-year survival still remains poor [5]. Thus, it reinforces the need to identify and establish, additional novel prognostic tools for the clinical evaluation of patients suffering from esophageal cancer.

The immune suppression of the tumors by immune cells and molecules of the tumor microenvironment has drawn much attention and recently shown promising immunotherapeutic results in various cancers [6]. We have also previously reported about the anti-tumor immunity role of adaptive T-cells, importantly, in the progression and prognostic prediction of human esophageal cancer [7, 8]. We showed that increased infiltrating densities of T-bet+ lymphocytes and CD8+ T cells, positively associated, while increased infiltrating density of Foxp3+ Tregs, negatively associated with better postoperative prognosis of esophageal cancer patients, [8]. Moreover, beside the immune cells mediating adaptive immune response, the tumor infiltrating innate immune cells like neutrophils, mast cells, NK cells, macrophages also contributed towards an anti-tumor immunity function [9–12]. In this regard, Chaput et al. [11] have reported that the infiltrating density of CD57+ nature killer (NK) cells and CD68+ macrophages, could be used as an independent prognostic predictor of stage II and III, human colorectal cancer, respectively. This suggested that these molecules can be important prognostic predictors and could be routinely used in patients suffering from this malignancy.

Correlation of CD57+ NK cells and CD68+ macrophages infiltration in the tumor nest and stroma, with patient’s characteristics

Table 2: Correlation between clinical parameters and the infiltrating density of CD68+ macrophages in esophageal cancer tissues

a,bThe same description as in Table 1. 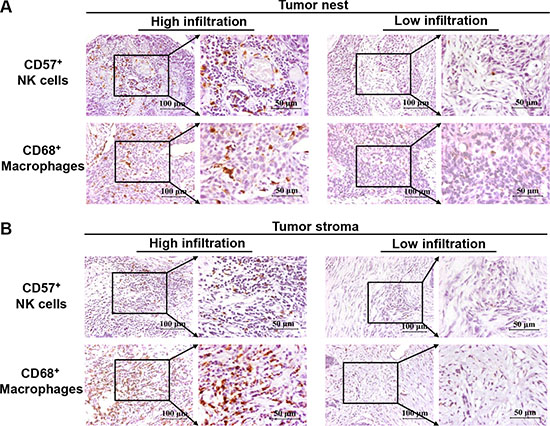 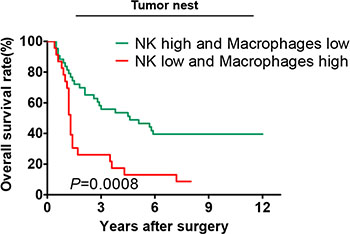 Table 3: Cox model analysis for the correlation between the infiltrating density of CD57+ NK cells in tumor nest and hazard ratio (n = 138)

Table 4: Cox model analysis for the correlation between the infiltrating density of CD57+ NK cells in tumor stroma and hazard ratio (n = 138)

Table 5: Prognostic value of the combination based on infiltrating density of CD57+ NK cells in tumor nest and in tumor stroma in Cox proportional hazards mode analysis (n = 138)

Table 6: Cox model analysis for the correlation between the infiltrating density of CD68+ macrophages in tumor nest and hazard ratio (n = 138)

Table 7: Cox model analysis for the correlation between the infiltrating density of CD68+ macropahges in tumor stoma and hazard ratio (n = 138)

Table 8: Prognostic value of the combination base on infiltrating density of CD68+ macrophages in tumor nest and in tumor stroma in COX proportional hazards mode analysis (n = 138)

The chronic inflammation in the tumor microenvironment is an essential aspect of cancer initiation and progression, and therefore regarded as a hallmark of cancer [13]. In the physio-pathological process of inflammation during cancer progression, many immune cells, especially the innate immune cells, including NK cells, macrophages, dendritic cells, and neutrophils has been shown to be involved not only in the prevention of tumor initiation or progression, but also in the promotion of malignant transformation and metastasis [14]. Thus, it’s of great importance to better understand the role of innate immune system in anti-tumor immunity, to establish the predicting model of cancer progression, its prognosis, and develop novel therapeutic strategy based on immune intervention [15, 16]. In the present study, we focused on the clinical significance and prognostic value of tumor infiltrating NK cells and macrophages in the tumor tissues from patients suffering from stage II+III esophageal cancer.

The NK cells are a cohort of lymphoid cells which are presumed to be major innate effector cells, and role importantly in the control of cancer initiation and progression due to their lytic function [17, 18]. The activated NK cells eliminate the tumor cells by releasing perforin and granzymes, expressing FasL and TRAIL, secreting IFN-γ, and antibody-dependent cellular cytotoxicity [18]. Thus, the sufficient presence of NK cells in the tumor microenvironment and their sustained effector function, contribute essentially to the antitumor immune response and finally leads to the prevention of cancer progression and metastasis [19, 20]. Ishigami et al. [21] reported that the gastric cancer patients with a high density of NK cells infiltration had better prognosis than those with a low level of NK cells infiltration. Similarly, Villegas et al. [22] also reported that, the NK cells infiltrating density in squamous cell lung carcinoma tissues was significantly associated with patient’s age and tumor stage, and could be a useful prognostic factor in this malignancy. In addition, it has also been suggested that in patients suffering from stage II+III colorectal cancer, the infiltrating densities of CD57+ NK cells and CD68+ macrophages in cancer tissues, could be used as a quick, inexpensive, and well-established method in predicting survival of those cancer patients [11].

Consistent with these observations, our data also showed that the density of the infiltrating CD57+ NK cells in the tumor stroma was positively and significantly associated with nodal status. The survival analysis suggested that the prognosis of patients with low infiltrating density of NK cells in tumor nest was significantly poor than of patients with high infiltration. The Cox model analysis based on the selection of gender, age, tumor size, TNM stage, treatment and NK cells infiltration specifically in tumor nest showed that the density of infiltrating NK cells could be used as an independent prognostic risk factor in predicting stage II+III esophageal cancer patients (Table 3), but this was not the case in the tumor stroma (Table 4). The combining of the densities of infiltrating NK cells in the tumor nest and stroma suggested that this parameter is again significantly associated with patient’s survival and could be used as an independent risk factor in prognostic prediction (Table 5). It is noteworthy that tumor cells could develop several strategies to escape NK-cell-mediated recognition in tumor microenvironment via immunoediting [18, 23]. It has been suggested that the interferon-γ-induced activation of JAK1 and JAK2 signaling pathway could suppress the tumor cell susceptibility to NK cells through up-regulation of PD-L1 expression [24]. In this context, the data from our and other groups have reported that the co-stimulatory molecule B7-H6 was over-expressed on cancer cells and binds to its receptor NKp30 on the NK cells, and thus leads to negative regulation of NK cells, which in-turn promotes cancer progression [25–29].

The macrophages, originating from bone marrow precursors as well as circulating and splenic monocytes, are also an important cohort of white blood cells, that have a phagocytic function and serve as the first-line of defense against pathogens, foreign substances and even cancer cells [30–32]. The macrophages infiltrating the tumor tissue are also known as tumor associated macrophages (TAMs), and have been suggested to play a critical role in the regulation of tumor microenvironment, and has physio-pathological affect on tumor initiation, intra-tumoral angiogenesis, immune suppression and tumor metastasis [30]. These TAMs usually polarize into two functional phenotypes, namely classically activated M1 and alternatively activated M2, in response to different microenvironment. The bulk of the literature suggested that M1-type TAMs have anti-tumor role, while M2-type TAMs promotes cancer progression, metastasis and intra-tumoral angiogenesis [18, 30, 33]. It has been demonstrated that in human lung cancer, the density of infiltrating macrophages was significantly associated with the density of micro-vessels and patients’ prognosis [34]. In gastric cancer, the infiltration of polarized TAMs has been identified to be a novel independent prognostic factor and has been proposed to be combined with the TNM stage, to re-define the risk stratification system and to better stratify the patients’ prognoses. The tipping of TAMs to an anti-tumoral phenotype has been speculated to be a promising therapeutic target for postoperative treatment [35]. Hu et al. [36] have reported that the M2-type TAMs in the tumor stroma conferred a poor prognosis in human pancreatic cancer. Another study by Atanasov et al. [37] demonstrated that the overall survival and recurrence free survival of the patients with hilar cholangiocarcinoma were significantly improved in patients with low infiltration of TAMs in tumor invasive front in contrast to those with a high infiltration.

Formalin-fixed, paraffin-embedded esophageal cancer tissue samples were collected from 138 patients, who underwent surgical resection, between November 2006 and March 2011 in our hospital. Among these patients, 102 were men, while 36 were women, and the median age at diagnosis was 59 years. No patients ever received pre-operative chemotherapy or radiotherapy and all tumor tissues were confirmed as the esophageal squamous cell carcinomas, using hematoxylin & eosin (H&E) staining after surgical resection. The tumor-node-metastasis (TNM) stages were assigned according to the American Joint Committee on cancer criteria [38]. The detailed clinical parameters of the patients are shown in Table 1. The protocols for the present study were approved by the ethics committee of the hospital.

Formalin-fixed, paraffin-embedded tissues were cut into 3-mm-thick sections, and were then dewaxed in xylene, rehydrated and graded in ethanol solutions. Antigens were retrieved by heating the tissue sections at 100ºC for 30 min in citrate (10 mmol/L, pH6.0) buffer. Next, the sections were immersed in a 0.3% hydrogen peroxide solution for 30 min to block endogenous peroxidase activity, and rinsed in phosphate buffered saline (PBS) for 5 min, blocked with 3% BSA at room temperature for 30 min, before incubating with anti-CD57 or anti-CD68 antibodies (Fuzhou Maxim Biotechnology, Fuzhou, China). Negative controls were processed by omitting the incubation with primary antibodies. The HRP-labeled goat anti mouse/rabbit secondary antibody (K500711, Dako, Glostrup, Denmark) was then used, according to the manufacturer’s instruction. The diaminobenzene was used as a chromogen, and hematoxylin as the nuclear counterstain. The sections were then finally dehydrated, cleared and mounted.

All statistical analyses were performed by using SPSS 22.0 software (SPSS, Inc., Chicago, IL). Chi-square test was used to compare the disease-related factors in the patients with low and high infiltrating NK cells and macrophages in the tumor nest and stroma. Kaplan-Meier method and the log rank test were used for comparing survival curves. The Cox model was used to assess the hazard ratio (HR) with 95% CI (confidence interval), for association of the infiltrating densities of NK cells and macrophages with the patient death after adjusting for the potential confounders. The P value of less than 0.05 based on the two-sided test was considered to be statistically significant.

The authors declare that they have no competing interests to this paper.