Objective: To investigate the effects of mTOR inhibition on drug resistance in lung adenocarcinoma after combined radiation and erlotinib therapy.

Methods: The effects of combined radiation and erlotinib therapy on tumor inhibition and drug resistance were evaluated by in vitro survival curves in PC9 lung adenocarcinoma cell line and in vivo growth curves in nude mouse xenograft tumor model respectively. The association between tumor drug resistance and the phosphatidylinositol 3-kinase/protein kinase B/mechanistic target of rapamycin (PI3K-AKT-mTOR) pathway was measured by western blot, assessing the changes in protein kinase B (AKT), phosphor-AKT (p-AKT), P70, and p-P70 protein levels. MTOR was inhibited using everolimus, and changes in AKT, p-AKT, P70, and p-P70 levels were observed. Furthermore, changes in in vitro survival curves, and in vivo growth curves before and after mTOR inhibition were evaluated to confirm its effects on drug resistance in lung adenocarcinoma after combined radiation and TKI therapy.

By measuring surviving fraction in vitro and tumor volumes in vivo, erlotinib and radiation both had inhibitory effects on tumor cells. However, after long-term treatment, colony formation survival curves revealed that the final surviving fraction was 0.019±0.008, even after combination therapy. Additional tumor cells were drug-resistant and formed colonies after combined erlotinib and radiation therapy. For xenograft tumors, the combined action of erlotinib and radiation produced a greater inhibitory effect than that of each individual agent. However, tumor volumes still slowly increased after 6 weeks of treatment (SF, and growth curve results are shown in Figure 1). Thus, these results showed that erlotinib combined with radiation had synergistically inhibited tumor growth; however, some cells remained drug resistant. 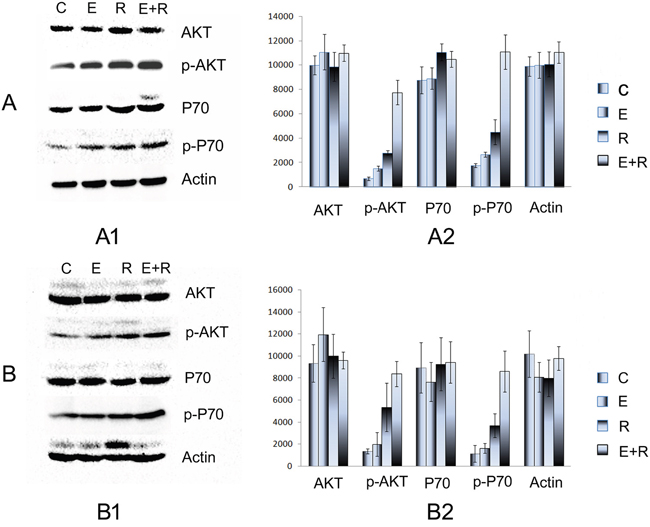 The drug resistance induced by radiation combined with erlotinib was inhibited by everolimus in tumor cells and xenograft tumors in nude mice. Western blot showed that protein expression of total AKT and P70 was not significantly altered; however, p-AKT expression slightly increased, and p-P70 expression, both in vivo and in vitro, significantly decreased compared with that in the combined radiation and erlotinib group. These results further confirmed that the PI3K-AKT-mTOR pathway is an important route for the development of drug resistance (Figure 3). 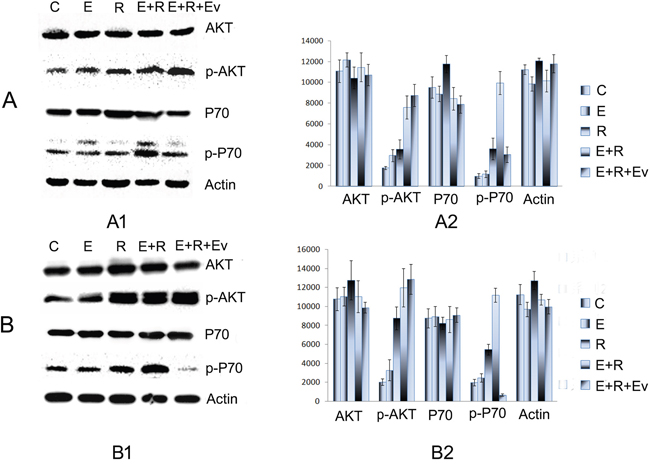 After p-P70S6K expression was reduced by everolimus, further treatment showed that the number of surviving cells significantly decreased compared with that in the combined erlotinib and radiation group. In addition, everolimus treatment at week 6 (when tumor xenograft began to progress) significantly inhibited tumor growth, and the growth curve turned downward (Figure 4). Thus, these results showed that after drug resistance induced by combined radiation and erlotinib treatment occurred in tumors, everolimus was able to reverse this drug resistance.

Figure 4: The effect of everolimus on drug resistance in adenocarcinoma after combined radiation and TKI therapy. A. The survival fraction of different treatment groups in vitro. SERE+R vs R=1.95, SER E+R+Ev vs E+R=2.27. The final surviving fraction of 10Gy dose was 0.008±0.003 at E+R+Ev group. P value less than 0.05 of comparison of each groups. B. The growth curve of different treatment groups in vivo. Everolimus treatment at week 6 (when tumor xenograft began to progress) significantly inhibited tumor growth, and the growth curve turned downward.

In summary, radiation is an important mechanism that induces changes in gene expression. Radiotherapy combined with TKI has been extensively applied in clinical practice. Drug resistance in lung adenocarcinoma after combined radiotherapy and TKI should be largely different from that induced by single-agent TKI therapy. This study suggests that the PI3K-AKT-mTOR pathway is an important mechanism underlying drug resistance after combined radiation and TKI therapy and provides ideas and potential targets to reverse this drug resistance. Although additional mechanisms still requiring further study exist, we believe that with continuous in-depth, basic studies and continuous accumulation of clinical practice data, the drug resistance induced by radiotherapy combined with TKI will eventually be resolved.

RPMI-1640 culture medium was obtained from Gibco (USA, Grand Island), and fetal bovine serum was obtained from Sijiqing Biological Engineering Materials Co., Ltd(Hangzhou, China). Monoclonal antibodies targeting AKT, phosphorylated AKT(p-AKT), P70, phosphorylated P70(p-P70) were purchased from Santa Cruz Biotechnology, Inc. (USA, Dallas, Texas). The CO2 incubator used for cell culture was purchased from Heraeus (Germany, Frankfurt), and the high-speed refrigerated centrifuge was also obtained from Heraeus. The flow cytometer was from Beckman Coulter, Inc. (USA, California). The PC9 lung adenocarcinoma cell line with high levels of epidermal growth factor receptor (EGFR) and phospho-EGFR, as reported previously [11, 12] was used in this study. Cells were cultured in RPMI-1640 medium supplemented with 10% fetal bovine serum, 100 IU/ml penicillin, and 100 IU/ml streptomycin in a 37°C incubator with an atmosphere of 5% CO2. Cells in the exponential growth phase were irradiated. BALB/c-nu /nu female nude mice of 5-6 weeks were used in in vivo experiments. The experiments and feeding were carried out in the SPF condition of the ultra clean laminar flow frame.

Colony-forming rates of the tumor cells were determined using the colony formation assay. The experiments on erlotinib-induced radiosensitization included the following treatment groups: control group, radiation alone group, erlotinib alone group, everolimus alone group, combined erlotinib and radiation group, and combined erlotinib and radiation with everolimus group. Cells in the exponential growth phase were trypsinized, counted, diluted, and seeded onto 35-ml flasks. The number of cells seeded onto the flasks was adjusted according to the radiation dose (500, 1000, 2000, 4000, 6000, 8000, and 10000 cells were seeded in 0, 1, 2, 4, 6, 8, and 10Gy groups, respectively). The concentrations of erlotinib and everolimus used were 20 nM. and 10 nM in vitro, respectively. A radiation dose of 2Gy/min was selected, and cells were exposed to 0, 1, 2, 4, 6, 8, or 10Gy of radiation after the attachment of cells on the plastic. After 14 days of cell seeding, the culture dishes were collected, and the culture medium was discarded. Cells were fixed and subjected to Giemsa staining. The number of colonies containing more than 50 cells was counted, and the cell survival fraction (SF) was calculated. The single-hit, multi-target model was used to fit the cell survival curves [13]. The experiments were confirmed three times, and each treatment group contained three parallel samples.

PC9 cells were digested with exponential growth phase, counted and centrifuged at 1 000r/min for 5 min. Cells were suspended and about 1×106 cells was injected into the thigh root of the nude mice. The tumors were observed 3 times a week after inoculation. When the tumor grew to about 1cm of the diameter, the experimental treatment started. The groups were same as the vitro experiment, and the radiation doses were same to those in vitro. In vivo experiment, both erlotinib and everolimus were used in 2mg/kg body weight. Animals’ care was in accordance with institution guidelines.

The expressions of AKT, p-AKT, P70, and p-P70 in the control group, radiation alone group, erlotinib alone group, everolimus alone group, combined erlotinib and radiation group, and combined erlotinib and radiation with everolimus group were examined using Western blotting. The treatments of erlotinib and the everolimus were the same as those described above. Cells were irradiated at a dose of 6Gy. The experimental procedures were performed as follows: 14 days after treatment, the cells were trypsinized and collected. In in vivo experiments, the tumors were observed for eight weeks, and then the mice were killed, and the tumors were removed. The total protein was extracted, and the protein concentration was determined by Coomassie brilliant blue staining. The proteins were separated by polyacrylamide gel electrophoresis and transferred onto polyvinylidene difluoride membranes. The membranes were then probed with primary antibodies, washed, incubated with horseradish peroxidase–conjugated secondary antibodies, and washed again. Finally, protein signals were visualized [14, 15].

Origin7.5 software (OriginLab Corporation) was used to fit the cell survival curves. The line charts were drawled with Excel. Data were presented as the mean ± standard deviation and were analyzed using SPSS17.0 software (IBM Corporation). The analysis of student’s t test was used to perform comparisons among multiple groups. P values less than 0.05 were considered statistically significant.

This research was supported by National Natural Science Foundation of China (81301925).

We declared that there were no any financial and personal relationships with other people or organizations that could inappropriately influence the work.