Prognostic significance of AMPK in human malignancies: A meta-analysis

Background: AMPK is a well-investigated kinase mediating cellular metabolism and stress responses. However, its indicative role in survival prognosis remains ill-defined. Therefore we performed this meta-analysis in order to clarify the prognostic impact of AMPK expression in human malignancies.

Methods: Literatures were retrieved via searching databases of PubMed, Web of Science, Embase and Cochrane Library. Studies comparing the prognostic significance between different AMPK levels among human malignancies were included into the pooled analysis. The statistical procedures were conducted by Review Manager 5.3 and the effect size was displayed by model of odds ratio. Subgroup analyses were additionally implemented to disclose the potential confounding elements. The outcome stability was examined by sensitivity analysis, and both Begg’s test and Egger’s test were utilized to detect the publication bias across the included studies.

Due to its essential efficacy in metabolic modulation, potential role of AMPK in human tumorigenesis attracts numerous academic attentions. It is currently acknowledged that once activated, the AMPK complex involves in a variety of neoplastic pathways, functioning as a core tumor suppressor [3]. Along with the phosphorylation on AMPKα, its downstream target COX-2 could be greatly depressed, which results in decreased level of inflammatory factors and carcinogenic risk [4, 5]. On the other hand, activated AMPK is able to upregulate the expression of ULK1, which is a positive regulator of autophagy that protects the stressful cells from oncogenic accumulation [6, 7]. Additionally, cellular senescence induced by activation of AMPK-p53 axis is another explanation of the tumor suppressor role of AMPK [8, 9]. Thus based on such mechanisms, AMPK has been confirmed as a vital anti-tumor effector among multiple malignancies including hepatocellular carcinoma [10], colorectal cancer [11], lung cancer [12] and thyroid cancer [13], emerging as a potential therapeutic target in cancer treatment.

However, despite of the accumulating laboratory evidences, the clinical significance of AMPK especially its prognostic role remains in controversy. Specifically, Zheng et al [14] reported that AMPK over-expression was correlated to a better prognosis among patients with hepatocellular carcinoma, while Baba et al [15] believed that the long-term survival of colorectal cancer was statistically irrelevant to AMPK expression levels. Since meta-analysis is a valuable tool to summarize conflicting literatures, we therefore performed this comprehensive meta-analysis in order to explain the prognostic significance of AMPK in human manlignancies and offer theoretical basis for future clinical applications.

Among the initially retrieved 3429 entries, 20 studies were eventually included into the meta-analysis, which totally consist of 21 retrospective cohorts (Figure 1). The overall sample-size added up to 9987 participants, individually ranging from 42 to 3554. China was the chief source region of included investigations (n=7), followed by USA (n=6). Liver cancer (n=4), breast cancer (n=3) and gastric cancer (n=3) were the most frequent tumor types among included cohorts. The expression of AMPK was primarily detected by immunohistochemistry (n=14), in addition to microarray (n=3), polymerase chain reaction (n=2) and western blot (n=2). Data of mean-age and sex ratio were comparable among most cohorts, except for Kim 2013, Su 2014 and Zhang 2014-C2. More details of baseline characteristics were demonstrated in Table 1. 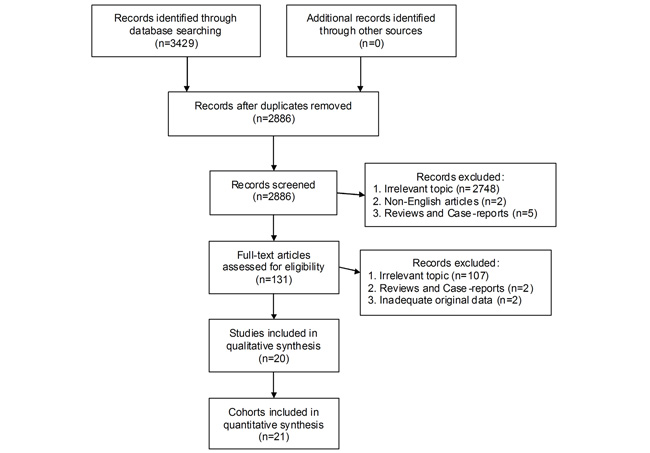 Figure 1: The selection flow chart of our pooled analysis.

The majority of included trials were graded as high-quality in methodology, including three 8-score studies, thirteen 7-score studies and three 6-score studies. Only Kim 2013 and Zhang 2014-C2 were appraised as low-quality cohorts, each with 5 scores by Newcastle-Ottawa Scale (Table 2). 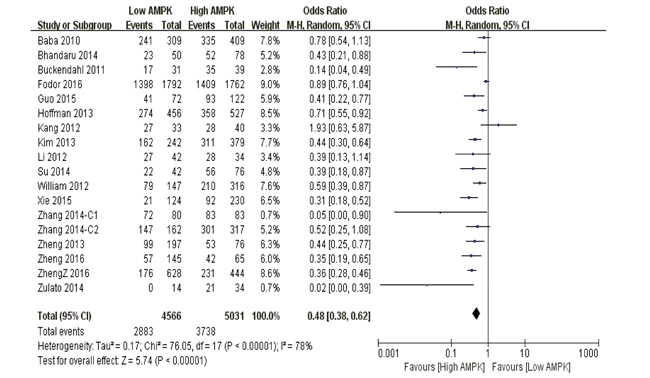 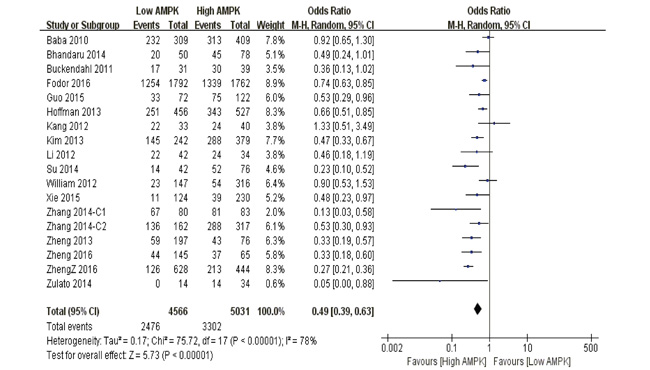 According to our pooled results, higher expression of AMPK indicated better prognosis among cancer patients, irrespective of 3-year, 5-year, 10-year overall survival and disease free survival. This is the first conclusive evidence of the prognostic role of AMPK in human malignancies and the strength of the outcomes is quite persuasive since most of the P value is less than 0.00001. These conclusions seem reasonable and comprehensible based on the present consensus that as a major tumor suppressor, AMPK activation restricts the metastatic tendency and malignant dissemination of the primary lesion [34], which accounts for almost 90 percents of cancer relevant mortality. Moreover, phosphorylated AMPK could effectively inhibit cell growth and induce apoptosis within neoplastic tissues [35], jointly contributing to the favorable survival outcome among patients with higher AMPK expression. However, deviating from the majority of included cohorts, Kang et al [22] suggested that inhibition of AMPK could successfully induce gastric cancer cell apoptosis so that patients with lower expression level were observed to have better overall survival. Since all participants from Kang’s study were followed up after a cisplatin-based adjuvant chemotherapy, whether this is simply an exception or cisplatin-based chemotherapy has unspecific correlations with AMPK expression awaits further clarifications.

In addition, subgroup analyses provided more in-depth perspectives of the AMPK significance. In terms of different tumor types, higher AMPK consistently served as an indicator of better prognosis among patients with gastric cancer, gynecological cancer, liver cancer and other kinds of cancer. On the other hand, its prognostic impact on the rest of malignancies remained ambiguous, especially for colorectal cancer. However, this outlier actually supports the experimental phenomenon by Baba et al [15] that AMPK signaling is only partially responsible for colorectal carcinogenesis and is activated merely in the setting of MAPK3/1 involvement. Since the positivity of MAPK3/1 is limited within colorectal cancer specimens, it is therefore explanatory that over-reactivity of AMPK is not a direct predictor of survival outcome among colorectal cancer patients. Besides, our pooled results confirmed that higher AMPK level revealed a better survival prognosis regardless of women-specific or sex-unspecific studies, ruling out the possibility of sex ratio as a confounding factor of internal heterogeneity. This pooled conclusion gives us a hint that AMPK may play a tumor suppressor role independent of estrogen and its downstream signaling among women-specific cancers, which calls for further mechanistic investigations. Moreover, irrespective of immunohistochemistry, microarray or polymerase chain reaction, higher AMPK expression was verified to positively correlate with survival expectancy of neoplastic sufferers. This result has confirmed the classical definition of AMPK that it bridges cellular molecules to construct an anti-tumor signaling network [36], since the upstream effectors could effectively trigger genomic transcription of AMPK before its downstream targets get stimulated. Thus more definite evidence is urgently required to explain the regulatory interplay between AMPK and the other essential factors. In terms of AMPK activation status, a favorable outcome of long-term survival was gained among patients with elevated AMPK expression, irrespective of phosphorylated or normal status. Since phosphorylated AMPK is actually the active form of AMPK, this result probably reveals that total AMPK expression is inductively increased along with the activating phosphorylation of AMPK, possibly mediated by self-stimulation of AMPK or its upstream kinase such as LKB1. What’s more, the clinical TNM stage is commonly recognized as an interfering parameter of tumor prognosis. Nevertheless, we reported that the prognostic significance of AMPK over-expression was not distorted despite the disparity of TNM stages, which meant that AMPK may widely participate into various phases of tumorigenesis and cancer progression.

Besides the summary of pooled results, here we have an explanation of the usage of odds ratio as the effect-size model rather than hazard ratio. As we all known, survival analysis provides time-to-event data which hazard ratio fits best for. However, result of Cox regression is needed to transform Kaplan-Meier curves into hazard ratio, which is not available among most of current literatures. Furthermore, no matter how long the follow-up has lasted, there is merely one combined result deriving from the hazard ratio instead of the time-phased outcomes by odds ratio. Therefore we selected odds ratio as a statistical model as Ocana et al [37] and Badillo et al [38] recommended in Journal of the National Cancer Institute.

Although our meta-analysis was rigorously designed and performed, there were still some limitations. Firstly, all included cohorts were retrospectively analyzed, which might lead to poor internal comparability despite that the demographic characteristics were statistically comparable. Prospective and randomized trials are therefore needed to draw a more persuasive conclusion in future updates. Secondly, although the total sample-size nearly reached 10 thousands, the amount of included studies were still insufficient, especially for the subgroup analyses. Thirdly, despite that we had conducted enough subgroup analyses, the internal heterogeneity could not be fully eliminated, which hinted the existence of unclear confounding elements.

Taken together, this is the first meta-analysis which confirms that higher expression of AMPK is correlated to better prognosis of 3-year, 5-year, 10-year overall and disease free survival among cancer sufferers. Additionally, these prognostic tendencies are independent of tumor type, sex ratio, detection method, AMPK activation status and TNM stage. Therefore, we believe that AMPK targeted therapy is a promising and revolutionary strategy for cancer patients.

All procedures mentioned below were performed in accord with PRISMA Checklist and Cochrane Collaboration protocols. Two investigators carried out each step independently, while any discrepancy was resolved by mutual discussion.

Databases of PubMed, Web of Science, Embase and Cochrane Library were thoroughly examined using the search term “ampk AND (cancer OR carcinoma OR malignancy OR tumor)”. Both abstract and full-text of the preliminary entries were screened in order to guarantee the eligibility of included studies.

Studies that met the following criteria were eventually included: 1. Formally published and English-written articles until May 2016; 2. Studies that comparing the prognostic value of different AMPK expression in human malignancies;

Studies were eliminated due to the following reasons: 1. Overlapped or duplicated articles; 2. Inappropriate article type including reviews and case-reports; 3. Inadequate original data of survival analysis;

Since all of the eligible studies were observational cohorts, the Newcastle-Ottawa Scale was therefore utilized for methodological appraisal. There were totally three categories within the scale including selection, comparability and outcome, with a full-mark of nine. Studies were identified as high-quality in methodology with at least six scores.

Review Manager 5.3 was employed as a statistical platform for pooled analysis. The effect size of each endpoint was presented by odds ratio and 95% confidence interval. I2 signified the degree of inconsistency across the included studies, whose value <25%, <50% and >50% implied low, moderate and severe heterogeneity respectively. Fixed-effects model was best-fit under circumstance of low heterogeneity, while random-effects model was the optimal choice for the remaining situations. Subgroup analyses were additionally conducted to seek for the potential confounding factors (tumor type; sex; detection method; AMPK activation status; TNM stage) within. By excluding low-quality trials and interchanging statistical modes, the stability of pooled outcomes was tested by sensitivity analysis. Moreover, Egger’s test and Begg’s test were applied to inspect publication bias among included trials. P<0.05 denoted statistical significance between the comparison.

We feel grateful to all staff in our department for offering methodological assistances.

This meta-analysis has been financially supported by Research Fund of Public Welfare in Health Industry, Health and Family Plan Committee of China (No.201402015) and National Natural Science Foundation of China (81572413).