Pyroptosis is involved in the pathogenesis of human hepatocellular carcinoma

Pyroptosis is a caspase-1 dependent programmed cell death, which is involved in the pathologic process of several kinds of cancers. Loss of caspase-1 gene expression has been observed in prostate and gastric cancers. However, the role of pyroptosis in human hepatocellular carcinoma (HCC) remains largely unknown. The aim of this study was to investigate the involvement of pyroptosis in the pathogenesis of HCC. Our study showed that pyroptosis was inhibited in HCC tissues and cells. Administration of berberine inhibited the viability, migration and invasion capacity of HepG2 cells through the induction of pyroptosis both in vitro and in vivo, which was attenuated by caspase-1 inhibitor Ac-YVAD-CMK. Conclusively, pyroptosis is involved in the pathogenesis of HCC, and may be a new neoplastic target for the treatment of HCC.

Liver cancer is the second-commonest cause of cancer related death, and accounted for 746,000 world deaths in 2012 [1]. Human hepatocellular carcinoma (HCC) arises from hepatocytes and represents the most frequent type of primary liver cancers. Although, a large amount of genomic and epigenetic alterations has been identified, mainly focused on apoptosis, autophagy and hepatitis virus, the treatment of HCC is still a conundrum [2–4]. Therefore, it is very important to clarify the molecular mechanisms of HCC and find novel therapeutic targets for this malignancy.

Pyroptosis is a form of caspase-1 dependent programmed cell death described in myeloid cells. Activation of caspase-1 distinguishes pyroptosis from other kinds of cell death. In this process, cells recognize certain harmful signals, produce cytokines, swell, burst, and ultimately die [5]. Pyroptosis has been demonstrated to aggravate diabetic cardiomyopathy, hepatic fibrosis and diabetes [6–8]. For cancer cells, the activation of pyroptosis may promote cell death and thus exert anticancer properties. The loss of caspase-1 gene expression was found in human prostate cancer [9, 10]. Moreover, caspase-1 deficiency enhances inﬂammation- induced colorectal tumor formation in mice [11]. However, little is known regarding the role of pyroptosis in HCC.

Berberine is a natural isoquinoline alkaloid, which is well known for its excellent antimicrobial activity and mild side effects [12]. Recently, an increasing number of studies has proved that berberine is a promising agent for cancer treatment [13]. It has been reported that berberine can induce both autophagy and apoptosis in HCC cells [14, 15]. In our preliminary experiments, we observed that berberine could activate caspase-1. We therefore set out the present study and explored the role of pyroptosis in the progression of HCC and the involvement of pyroptosis as a possible mechanism by which berberine induces HCC.

Loss of caspase-1 expression in HCC 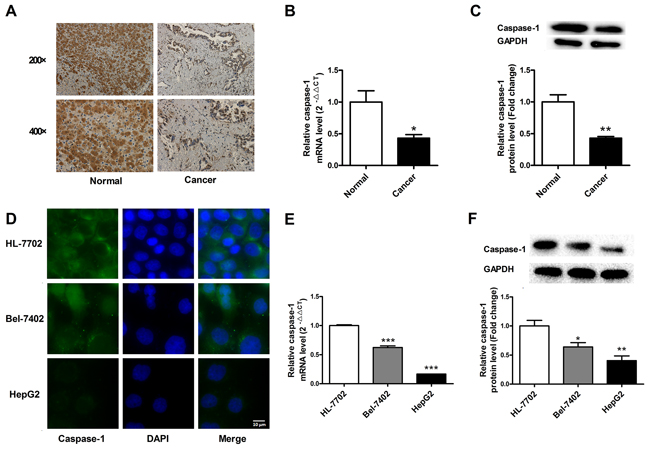 The cell number was decreased and cell swelling was observed after treatment with berberine (Figure 2A). Berberine increased the mRNA and protein expression of caspase-1 in HepG2 cells in a concentration-dependent manner with statistical significance starting from 50 μM (Figure 2B & 2C). Thus, this concentration was used for the subsequent experiments. We also found that berberine decreased the viability of HepG2 cells (Figure 2D). 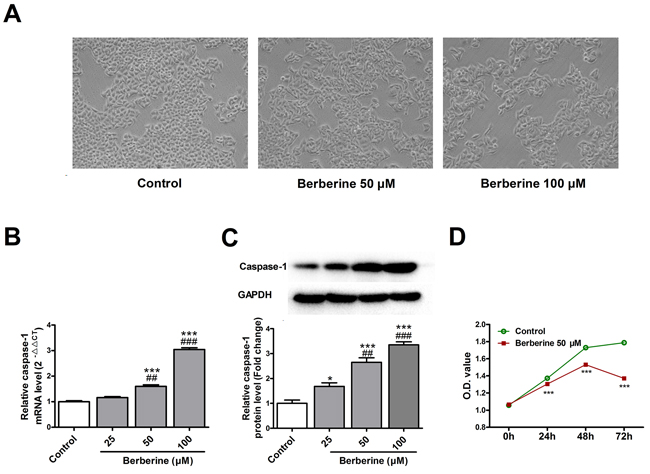 Caspase-1 inhibitor attenuates the effects of berberine in HepG2 cells

MTS assay, scratch-wound assay and Boyden Chamber cell invasion assay were conducted to determine the effects of berberine on HepG2 cell. The results showed that berberine inhibited the viability, and migration and invasion capacity of HepG2 cells, and these effects were attenuated by caspase-1 inhibitor Ac-YVAD-CMK (Figure 3). The expression upregulation of caspase-1 induced by berberine treatment was also effectively reversed by caspase-1 inhibitor (Figure 4). These results suggest the effects of berberine were at least partially through activation of caspase-1. 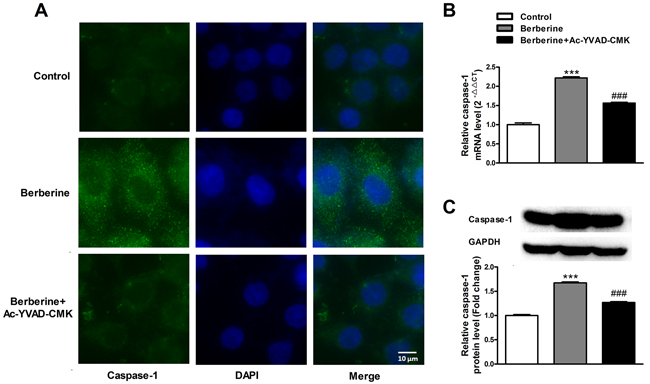 We then carried out the in vivo experiments using a xenograft mouse model to verify the in vitro observations. The tumor volume was significantly decreased after treatment with berberine, compared with the control group, and caspase-1 inhibitor attenuated the effects of berberine (Figure 5A). After the measurements, the mice were sacrificed and the tumor tissues were dissected for histology, immunohistochemical, real-time PCR and western blot analyses. As shown in Figure 5B, berberine triggered an inflammatory reaction of HCC tissues, which was attenuated by caspase-1 inhibitor. Meanwhile, berberine significantly increased the expression of caspase-1, which was reversed by caspase-1 inhibitor (Figure 5C,D & 5E). 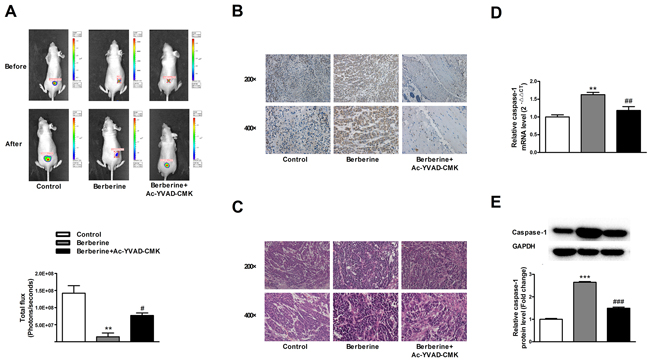 Figure 5: Caspase-1 inhibitor abolishes the beneficial effects of berberine on xenograft tumors in nude mice. A. Tumor volume of mice. B. The histopathological changes in tumors. C. The immunohistochemical staining of caspase-1 in tumors. D. The expression of caspase-1 mRNA in HepG2 cells. E. The expression of caspase-1 protein in HepG2 cells. GAPDH served as an internal control. **P < 0.01 versus Control, ***P < 0.001 versus Control; ##P< 0.01 versus Berberine, ###P < 0.001 versus Berberine; n = 3.

HCC is considered to be one of the most common malignancies worldwide. However, current medication is not sufficient to resolve the major concern about the long-term treatment efficacy. Therefore, uncovering the molecular pathogenesis of HCC and finding new therapeutic targets are vitally important.

Pyroptosis is a newly discovered way of programmed cell death, and it is associated with activation of caspase-1 to induce cancer cell death. Whilst activation of pyroptosis has been shown to elicit beneficial effects against many types of cancers, its potential role in HCC largely remained a riddle. The present study provided the evidence for the involvement of pyroptosis in HCC, as indicated by loss of caspase-1 expression in human HCC and adjacent normal tissues, as well as in HCC and hepatocyte cell lines. Moreover, berberine restored the abnormal downregulation of caspase 1, mitigating the viability, migration and invasion capacity of HepG2 cells, and these effects were attenuated by caspase-1 inhibitor Ac-YVAD-CMK. These findings indicate that pyroptosis process is inactivated in HCC and berberine reactivated the program.

It has been widely accepted that berberine possesses inhibitive effects on breast, lung, prostate and liver cancers [15–18]. However, the molecular mechanisms underlying the anti-cancer efficacy of berberine have not been fully elucidated. Several mechanisms have been delineated to explain the anticancer properties of berberine, of which activation of apoptosis is the best characterized event. Previously, caspase-1 was implicated in the execution of apoptosis. We found here that berberine exerts inhibitory effects on HCC both in vitro and in vivo, consistent with the published results [19–21]. Our data strongly suggest that the anti-HCC efficacy of berberine could be ascribed at least partially to its ability to stimulating pyroptosis via rescuing the expression of caspase-1. Pyroptosis could be either beneficial or detrimental depending on different pathological conditions. As for cancer, activation of caspase-1 can increase the secretion of pro-inflammatory cytokines to exert carcinogenesis effects or induce cell death to exert carcinostasis effect. In the present study, we found that the induction of pyroptosis exerted inhibitive effect on HCC.

Three pairs of HCC and adjacent normal tissues were obtained from the Third Affiliated Hospital of Harbin Medical University. The experiments were carried out in accordance with The Code of Ethics of the World Medical Association (Declaration of Helsinki) for experiments including human. This study was approved by the Ethics Committee of Harbin Medical University, China. Written informed consent was obtained from each participant after a full explanation. The tissues were collected at the time of surgical resection.

To detect the effect of berberine on cell viability, HepG2 cells were seeded into a 96-well culture plate, and treated with berberine chloride (Sigma, MO, USA) (50μM) or in combination with caspase-1 inhibitor Ac-YVAD-CMK (100 μM). After treatment, cell viability was assessed using the CellTiter 96® AQueous One Solution Reagent (Promega, Madison, WI, USA) according to the manufacturer’s instructions.

Cells were seeded into a 12-well culture plate and the cell monolayer was scratched in a straight line with a sterile 10-μL pipette tip. In order to remove the debris and smooth the edge of the scratch, culture medium was removed and wells were washed three times with the medium. Berberine and caspase-1 inhibitor Ac-YVAD-CMK were then added to culture medium. The width of the open area was measured 48 h later. The distance of wound closure was used to estimate the migration ability.

After pretreatment with berberine for 24 h, cells were harvested and seeded to an invasion chamber (BD BioCoat, CA, USA) at 1.5×104 cells per well in serum-free medium, and then incubated at 37°C for another 24 h. The invaded cells were fixed with methanol and stained with Giemsa. Cell numbers were counted under a light microscope.

BALB/c-nude male mice of 5 to 6 weeks old weighing 18-20 g were used. The mice were housed with a regular 12-h light/12-h dark cycle with ad libitum access to standard rodent chow diet and were kept in a pathogen-free environment. For in vivo tracking, HepG2 cells were stably transfected with firefly luciferase. The HepG2 cells (1×107cells suspended in 100μL serum-free DMEM) were injected subcutaneously into the back of mice. Eight days post-implantation, the mice were randomly divided into three groups (n = 6 for each group) and fed by oral gavage with saline, berberine (20 mg·kg-1·d-1), or berberine and intraperitoneal caspase-1 inhibitor Ac-YVAD-CMK (0.1 mg·kg-1·d-1). Tumor volume was monitored by luciferase activity in HepG2 cells, and the emitted photons from the target site penetrated through the mammalian tissue and could be externally detected and quantified using a sensitive light imaging system. Mice were euthanized 21 days after treatment and the tumors were isolated for further detection.

Hematoxylin and eosin (HE) staining

Tumor tissues were fixed in 4% paraformaldehyde followed by dehydration. The processed samples were embedded in paraffin and cut into 5-μm thick sections using tissue-processing equipment. The sections were deparaffinized and stained with HE for histological analysis.

HCC and adjacent tissues were fixed with 4% buffered paraformaldehyde, dehydrated and embedded in paraffin. Five-μm sections were deparaffinized, rehydrated, and rinsed in distilled water. Antigen unmasking was carried out by microwave heating in citrate buffer for 20 minutes. All sections were immunostained with the primary antibody against caspase-1 (cell signaling, MA, USA) at 4°C overnight. After incubation with the secondary antibody, the sections were stained with diaminobenzidine.

Cultured cells were fixed with 4% paraformaldehyde at room temperature for 20 min. Nonspecific binding was blocked for 2 h by goat serum and cells were subsequently incubated with primary antibody (1:50) at 4°C overnight. Then the cells were washed and incubated with second antibody for 1 h. The images were captured using a fluorescence microscope.

Total protein was extract from cells or tissues. The suspension was subjected to 10% acrylamide gel electrophoresis (SDS-PAGE) followed by electrotransfer onto a nitrocellulose filter. After blocked with 5% (w/v) non-fat milk dissolved in PBS for 2 h, the membranes were incubated at 4°C overnight with primary antibodies of caspase-1 (Cell Signaling, MA, USA) and GAPDH (ZSGB-BIO, Beijing, China), followed by incubation with HRB labeled goat anti-mouse IgG or anti-rabbit IgG (1:1000) (ZSGB-BIO, Beijing, China) for 1 h. Western blotting bands were quantified using Quantity One software.

The authors thank Xinlei Li and Chaorun Dong for their help in immunofluorescence detection of caspase-1.

11. Hu B, Elinav E, Huber S, Booth CJ, Strowig T, Jin C, Eisenbarth SC and Flavell RA. Inflammation-induced tumorigenesis in the colon is regulated by caspase-1 and NLRC4. Proceedings of the National Academy of Sciences of the United States of America. 2010; 107:21635-21640.