Hepatocellular carcinoma (HCC) is usually managed by the transcatheter arterial chemoembolization (TACE). However, this technique has been challenged since severe complications have been observed in clinical practices. As a result, clinicians have started to seek other minimally invasive surgeries with equivalent efficacy. The corresponding surgeries were assessed by the five outcomes: complete response (CR), partial response (PR), stable disease (SD), progression disease (PD) and objective response rate (ORR). Direct meta-analysis and network meta-analysis were performed and the results were represented by odds ratios (OR), 95% confidence and credential intervals. Furthermore, the value of surface under the cumulative ranking curve (SUCRA)was calculated to provide corresponding rankings.Seventeen studies were incorporated into the network meta-analysis which indicated that TACE + external-beam radiation therapy (EBRT) and drug-eluting beads (DEB) were better than TACE at controllingPD. TACE + EBRT demonstrated their advantages compared to TARE-90Y.However, network meta-analysis comparison showed no significant difference between the corresponding eight treatments with respect to CR, PR, SD and ORR. Moreover, the SUCRA suggested that TACE+EBRT were better than other treatments at treating unresectableHCC.Based on the present results of this network meta-analysis, TACE + EBRT was more effective than the other seven minimally invasive surgeries and therefore it is considered as the optimal treatment for HCC.

Hepatocellular carcinoma (HCC)is one of the most lethal cancers all around the world. New medications and treatments are being developed to tackle the high morbidity and mortality of HCC [1].Currently, resection has been the first choice for managing HCC at early stages [2]. However, early symptoms of HCC are difficult to be identified due to the specificity of HCC. As a result, HCC is usually diagnosed at advanced stages in which conventional treatments such as local ablation therapy, surgical resection and liver transplantation are not feasible [3].

A previous study suggested that transcatheter arterial chemoembolization (TACE) is the first choice to treat the intermediate-stage HCC [4]. The proportion of HCC patients who achieved partial remission after TACE is approximately 62% and both tumor progression and vascular invasion were delayed significantly [5]. As suggested by various randomized controlled trials, TACE improved the average survival time by approximately two years compared to symptomatic treatments and systemic chemotherapies [6].Common techniques including sorafenib (SOR), percutaneous ethanol injection (PEI), high intensity focused ultrasound (HIFU), drug-eluting beads (DEB) and external-beam radiation therapy (EBRT) can be combined with other therapies. Furthermore, studies have provided evidence that introducing HIFU into TACE improved the overall survival rate compared to TACE alone [7] and the cumulative survival rate of HCC patients treated by PEI in conjunction with TACE was 12.7% higher than those treated with TACEalone [8].Some studies also suggested that introducing DEB into TACE enhanced the effectiveness of TACE and such an enhanced effectiveness is reflected by an improved survival rate as well as theinhibition of tumor progression [9].Although there was no significant difference in the total survival rate between the ethanol ablation (TEA) and TACE, it is acknowledged that TEA has more durable effects on HCC patients than TACE [10]. Recently, the yttrium-90 radio embolization (TARE-90Y)has started to replace TACEwith respect to local HCC [4].

The elegant approach of network meta-analysis enabled us to compare the efficacy of different minimally invasive surgeries by synthesizing both direct and indirect evidence obtained from randomized trials. Apart from that, the network meta-analysis provided us with a comprehensive ranking with respect to different endpoints and such a ranking may be used to distinguishing one treatment from another [11]. 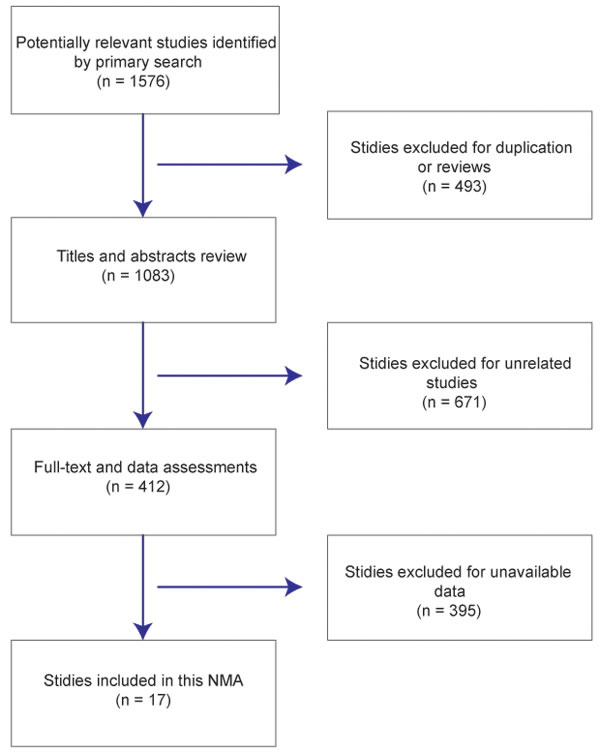 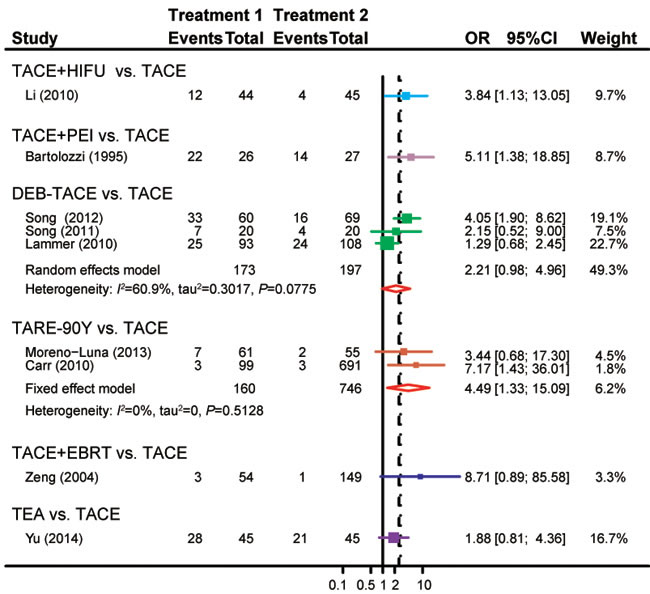 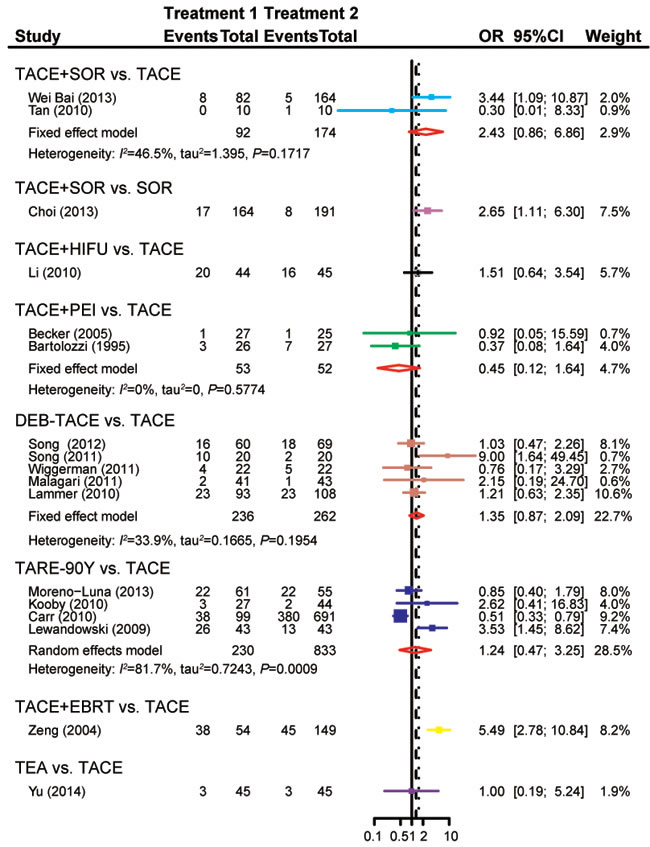 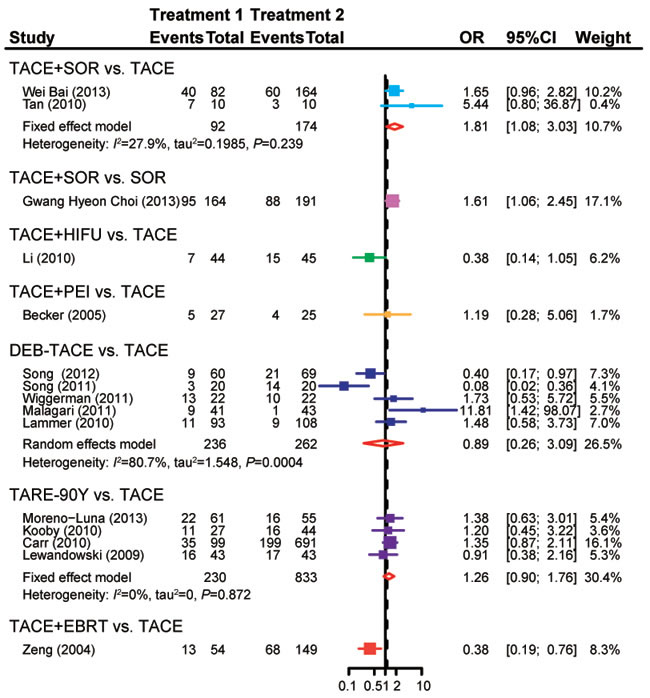 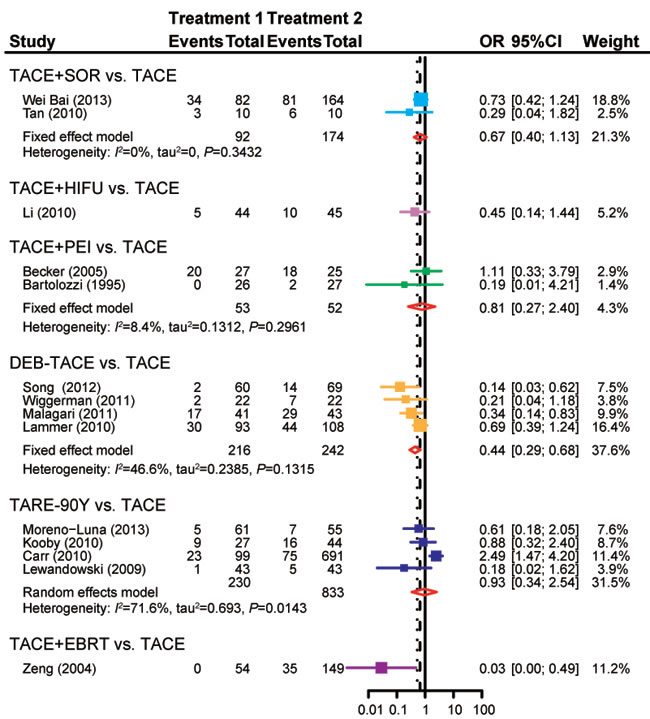 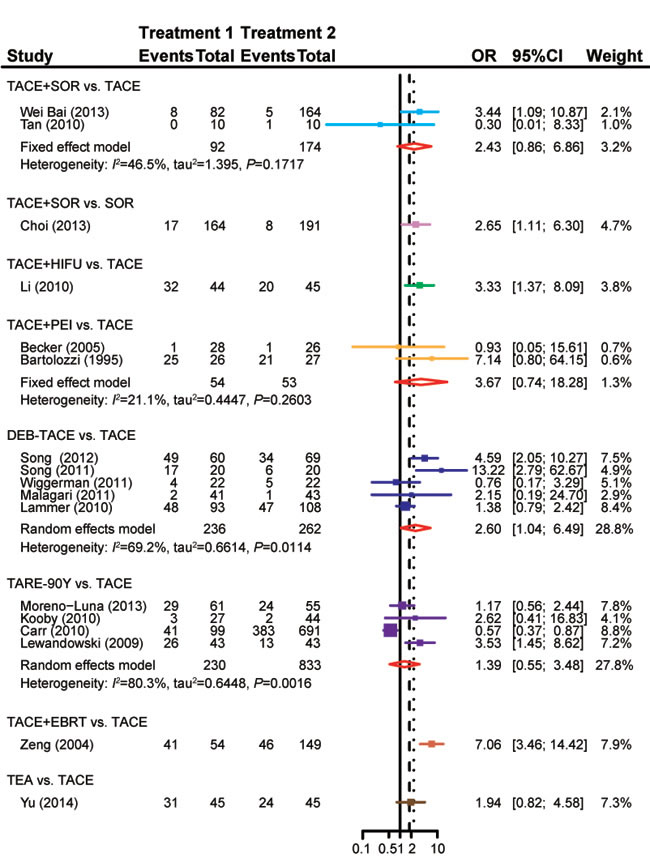 Another interesting trend is that DEB-TACE and TACE+EBRTshow a higher PD ratethan TACE. Therefore, we suspected that TACE+EBRT may provide HCC patients with favorable results with respect to disease progression control whereas single TACE may not provide such effectiveness.

Table 7 shows the relative ranking of eight minimally invasive treatments which are widely applied in clinical practices for unresectable HCC. As suggested by the corresponding SUCRA values, TACE+EBRT appeared to have the highest ranking in CR (76.50%), PR (88.50%), PD (95.33%) and ORR (81.13%). TACE+SOR exhibited the highest ranking probability (79.14%) with respect to SD. All of this evidence enabled us to conclude that TACE+EBRTmay be the most appropriate treatment for managing patients with unresectable HCC.

As one of the most common malignant tumors, the mortality ofHCC is extremely high and we have witnessed a large number of families struggling with this disease [26, 27]. In this study, we collected data from 17 studies with respect to eight minimally invasive surgical approaches in order to assess their short-term efficacy and safety. Our research objective is to rank the corresponding surgical approaches by using theelegant approach of network meta-analysis. It appears that TACE+EBRT was more effective than the other seven surgical approaches. Moreover, TACE+SOR, DEB-TACE,TACE+HIFU, TACE+PEI and TARE-90Y exhibited stronger performance than expected.

TACE has been recommended for patients who are not suitable for surgeries [28]. However, arterial occlusion in tumor tissues may trigger hypoxia and hence contribute to the over-expression of hypoxia-inducible factor 1 (HIF-1α) and vascular endothelial growth factor (VEGF) [29, 30].While the over-expression of HIF-1α could cause tumor progression, invasion and metastasis [31, 32], VEGF inhibits the apoptosis of vessel endothelial cells and promotes proliferation [33, 34] and it triggers tumor progression by stimulating the formation of blood vessels [35]. Although our study demonstrated the short-term effects of these surgical approaches, whether these effects remain strong in the long term should be further verified [36, 37]. As suggested by previous studies, introducing EBRT into TACE was able to enhance the effectiveness of TACE alone and hence improve the overall survival status of HCC patients [23, 38, 39]. Besides that, both direct and indirect evidence from the network meta-analysis reached a conclusion that TACE+EBRT were more effective than TACE alone with respect to CR, PR and ORR. By contrast, TACE had better performance than TACE+EBRT with respect to SD and PD.On top of that, TACE+EBRT exhibited compelling results in PR, PD, CR, ORR and DCR in comparison to the other seven minimally invasive surgeries.

One major issue of TACE was contributed by the over-expression of VEGF and HIF-1α which result in tumor progression, invasion and metastasis [29, 30, 40].SOR is a multikinase inhibitor which is able to suppress tumor cell proliferation by targeting theVEGF receptor and/or the PDGF receptor [41, 42]. Our study supported the notion that introducing SOR into TACE could significantly enhance the effectiveness of TACE which was reflected by the improved PR and SD. This trend may be explained by the fact that SOR is likely to suppress the expression of VEGF and hence reduce the side effects resultedfrom TACE. Additionally, DEB-TACE also exhibited promisingresults in the SUCRA ranking. DEB-TACE is able to alleviate the local embolization resulted from HCC lesions and prolong the release of chemotherapeutic agents into adjacent tissues [43, 44].Furthermore, DEB-TACE is able to alleviate the symptoms of HCC by releasing some antitumor lesion factors so that the side effects of TACE can be prevented [45-47].As suggested by the corresponding ranking of SUCRA, TARE-90Y, TACE+HIFU and TACE+PEI all displayed desirable results compared to TACE alone in most of the aspects. It is known that 90Y is a pure β emitter which stimulates the physical half-life of zirconium-90 to approximately 64.1 hours and such a stimulation enables it to have some excellent properties being an effective transarterial liver-directed agent [48]. More importantly, TARE-90Y is able to release radioactive particles into the liver artery without significant arterial occlusion [49] and HIFU perhaps is able to induce the complete coagulative necrosis of tumor without affecting adjacent tissues and structures [50].On the other hand, TACE+PEI have been considered as an appropriate option for small HCC lesions provided that the diameter of tumorshould be less than 3 cm and such a criterion has reduced the popularity of TACE+PEI in clinical practices [51].

Nevertheless, some limitations may have uncertain impact on theoverall conclusions. For instance, four surgeries (TACE+HIFU, TACE+PEI, TACE+EBRT, TEA) contained only one eligible trial and thus the assessment of these approaches may not be as accurate as those approaches in which a large number of trials were included. Inherent difference in studies and trials such as study design, assessment approach and surgical procedures may also have influenceon the overall results. Finally, we intentionally removed some studiesin which side effects were not mentioned and such missing studies may contain key information with respect to the efficacy and safety of these surgeries.

For summary, TACE+EBRT exhibited the most compelling results in comparison to the other seven minimally invasive surgeries. Futures studies should investigate the long-term effects of these minimally invasive surgeries on HCC patients by designingappropriate following-up studies. This study may provide sensible perspectives with respect to choosing the appropriate surgical approaches for individual HCC patients.

In the meta-analysis, studies that met the following criteria were included: (i) randomized controlled trials; (ii) one or more of the following interventions were involved in the trials: TACE, TACE+SOR, SOR, TACE+HIFU, TACE+PEI, DEB-TACE, TARE-90Y, TACE+EBRT and TEA; (iii) patients involved were over 18yearsold with unresectableHCC; (iv) no operative interventions had been conducted before the trials were conducted; (v) one or more of the following outcomes were assessed: complete response (CR), partial response (PR), stable disease (SD), progression disease (PD) and objective response rate (ORR).

However, studies were excluded if any of the following conditions were satisfied: (i) patients involved failed to perform normal activities or did not have normal functioning kidneys, lungs or heart; (ii) treatments for unresactableHCC, such as surgery, medication, radiotherapy and others, had been given; (iii) unqualified literatures which did not have academic integrity (e.g. incorrectly matched case-control studies).

The corresponding data was extracted by two reviewers independently, and then were entered into Excel spreadsheets that were created by the third reviewer. The data were extracted including the author, region, year, treatment, size of sample and endpoints. Disagreements between the two reviewers, if any, were resolved by consensus or with the help of the third reviewer.

Initially, we performed direct meta-analysis with R software (V3.2.1). Binary outcomes were then compared in terms of odds ratios (OR) and 95% confidence interval (CI). Inter-study heterogeneity was identified using the Q test and I2 test. If there was no significant heterogeneity among studies, a fixed-effects model was selected for analysis; otherwise a random-effects model was selected for analysis [52]. Next, network meta-analysis was performed by using the GEMTC (V0.6) package and the corresponding results were combined with those obtained from the DerSimonian-Laird random-effects model and Monte Carlo Markov Chain (MCMC). We used R software (V3.2.1) in order to produce the surface under the cumulative ranking curve (SUCRA) and calculated the ranking of different interventions [53]. For each intervention, efficacy and safety outcomes were ranked by the SUCRA: a higher value of SUCRA indicated a higher ranking. All the calculations were conducted by using R software (V3.2.1), GEMTC package (V0.6) and Open BUGS (V3.4.0).