Triple-negative breast cancers (TNBC) are defined by a lack of expression of estrogen, progesterone, and ERBB2 receptors, and are the most aggressive and metastatic breast cancer. The absence of effective treatment for this recalcitrant disease lead to a higher rate of local and systemic relapse after primary tumor resection.

Fluorescence-guided surgery (FGS) is an area of intense research [1]. Green fluorescent protein (GFP) has been previously successfully used for targeting tumors in situ for FGS using a telomerase-dependent adenovirus (OBP-401) that expresses the gfp gene only in cancer cells [1–7]. Since recurrent cancer cells stably express GFP, detection of cancer recurrence and metastasis is also possible with OBP-401 GFP labeling [7], in contrast to fluorescent-antibody or other non-genetic labeling [1].

In the present study, we describe that OBP-401 targets a high-metastatic variant of triple-negative human breast cancer, an aggressive recalcitrant cancer, in nude mice and enables complete resection, prevents recurrence and improves disease-free survival and over-all survival. The clinical implications of these results are discussed. 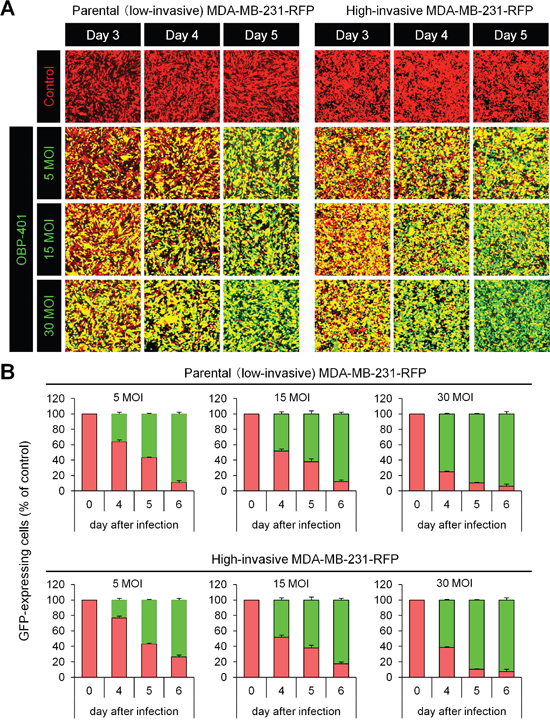 In situ OBP-401 labeling enabled tumor margins to be visualized (Figures 2B, 2D) and enabled tumor resection without residual cancer cells (Figure 2E). The time course of the FGS procedure for the high-invasive MDA-MB-231 variant is shown in Figure 3, using the portable Dino-Lite fluorescence scope. Confocal imaging visualized the resected tumor at the single-cell level. 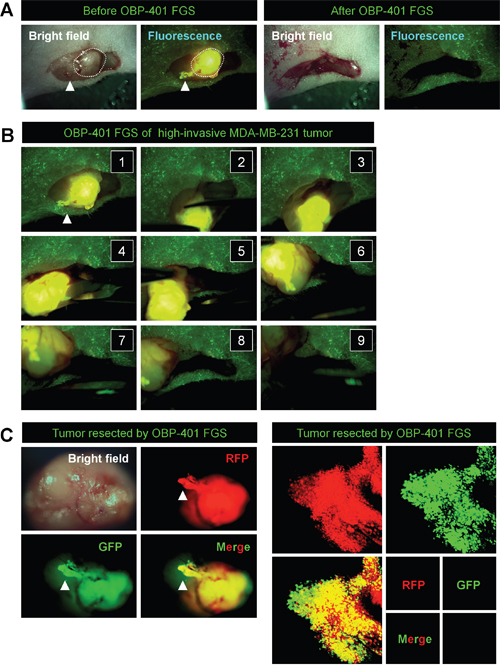 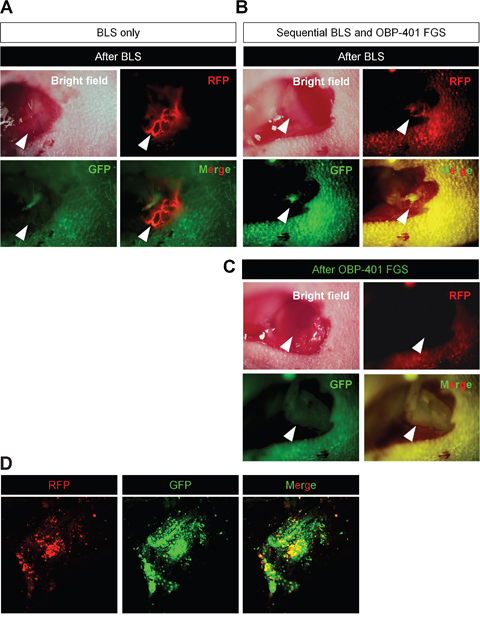 BLS results in recurrence and FGS does not

Table 1: Efficacy of BLS or FGS on high- and low-invasive triple-negative breast cancer

In the present report, we demonstrate that high-invasive triple-negative breast cancer (TNBC) can be cured by OBP-401-based FGS, in contrast to standard BLS, which cannot cure this disease, in orthotopic nude mouse models. The present results demonstrate that recurrence of even a highly-invasive TNBC can be prevented in a clinically-relevant mouse model by FGS. Our results thereby indicate the clinical potential of OPB-401-based FGS for highly-aggressive cancer. OBP-401-based FGS can also be applied to liver metastasis resection [8] and other metastatic disease. FGS can also be performed with chemically-activable fluorescent probes [10–13] that can be used in a complementary manner with OBP-401 to ensure all cancer cells can be visualized by the surgeon, including recurrent disease.

Previously developed concepts and strategies of highly-selective tumor targeting can take advantage of molecular targeting of tumors, including tissue-selective therapy which focuses on unique differences between normal and tumor tissues [14–19].

Athymic nude mice (AntiCancer Inc., San Diego, CA) were used in this study. Mice were fed with autoclaved laboratory rodent diet (Tecklad LM-485, Western Research Products). All animal studies were conducted in accordance with the principals and procedures outlined in the National Institutes of Health Guide for the Care and Use of Laboratory Animals under assurance A3873-01. All animal studies were conducted with an AntiCancer Institutional Animal Care and Use Committee (IACUC)-protocol specifically approved for this study. In order to minimize any suffering of the animals, anesthesia and analgesics were used for all surgical experiments. Animals were anesthetized by intramuscular injection of a 0.02 ml solution of 20 mg/kg ketamine, 15.2 mg/kg xylazine, and 0.48 mg/kg acepromazine maleate. The response of animals during surgery was monitored to ensure adequate depth of anesthesia. Ibuprofen (7.5 mg/kg orally in drinking water every 24 hours for 7 days post-surgery) was used in order to provide analgesia post-operatively in the surgically-treated animals. The animals were observed on a daily basis and humanely sacrificed by CO2 inhalation if they met the following humane endpoint criteria: prostration, skin lesions, significant body weight loss, difficulty breathing, epistaxis, rotational motion and body temperature drop. The use of animals was necessary to develop fluorescence-guided surgery of highly-metastatic triple-negative breast cancer. Mice were housed with no more than 5 per cage. Mice were housed in a barrier facility on a high-efficiency particulate arrestance (HEPA)-filtered rack under standard conditions of 12-hour light/dark cycles. The animals were fed an autoclaved laboratory rodent diet.

The recombinant GFP-expressing, cancer-specific, replication-selective adenovirus vector OBP-401, has the promoter element of the human telomerase reverse- transcriptase (hTERT) gene which drives the expression of E1A and E1B genes linked to an internal ribosome entry site for selective replication only in cancer cells. The GFP gene is driven by the CMV promoter. The virus was constructed and produced as previously described [2-9, 20, 21].

The OV100 small animal imaging system (Olympus Corp., Tokyo, Japan), was used. The OV100 contains an MT-20 light source (Olympus Biosystems, Planegg, Germany) and DP70 CCD camera (Olympus), for subcellular imaging in live mice. The optics of the OV100 have been specially developed for macroimaging as well as microimaging with high light-gathering capacity. The instrument incorporates a unique combination of high numerical aperture and long working distance. Four individually-optimized objective lenses, parcentered and parfocal, provide a 105-fold magnification range for seamless imaging of the entire body down to the subcellular level without disturbing the animal [24]. The FV1000 scanning laser confocal microscope (Olympus, Tokyo, Japan) was used for cellular imaging of resected tumors [25].

All animal procedures were done under anesthesia using s.c. administration of a ketamine mixture (see above). After skin incision, the OBP-401-GFP-labeled tumor was visualized with the OV100 [2-9, 20, 21]. The tumor was resected under fluorescence-guidance using the Dino-Lite (AM4113T-GFBW Dino-Lite Premier; AnMo Electronics Corp., Hsinchu, Taiwan), a hand-build scope [26]. After tumor resection, if there was residual tumor, a second resection was performed. After surgery, the skin incision was closed with a 6-0 suture.

Data are shown as means ± standard deviation (SD). For comparison between two groups, significant differences were determined using Student’s t-test. P values of < 0.05 were considered significant. For comparison of more than two groups, statistical significance was determined with a one-way analysis of variance (ANOVA) followed by a Bonferroni multiple group comparison test. Pearson chi-square analysis was used to evaluate the rate of local recurrence, lymph node metastasis between BLS and OBP-401 FGS of parental MDA-MB-231 and high-metastatic MDA-MB-231 tumors. Statistical analysis for disease-free survival and overall survival was performed using the Kaplan-Meier test along with log-rank test.